Happy! Sad! And more hoary clichis about what women want to see. I've never been this insulted by a chick flick. 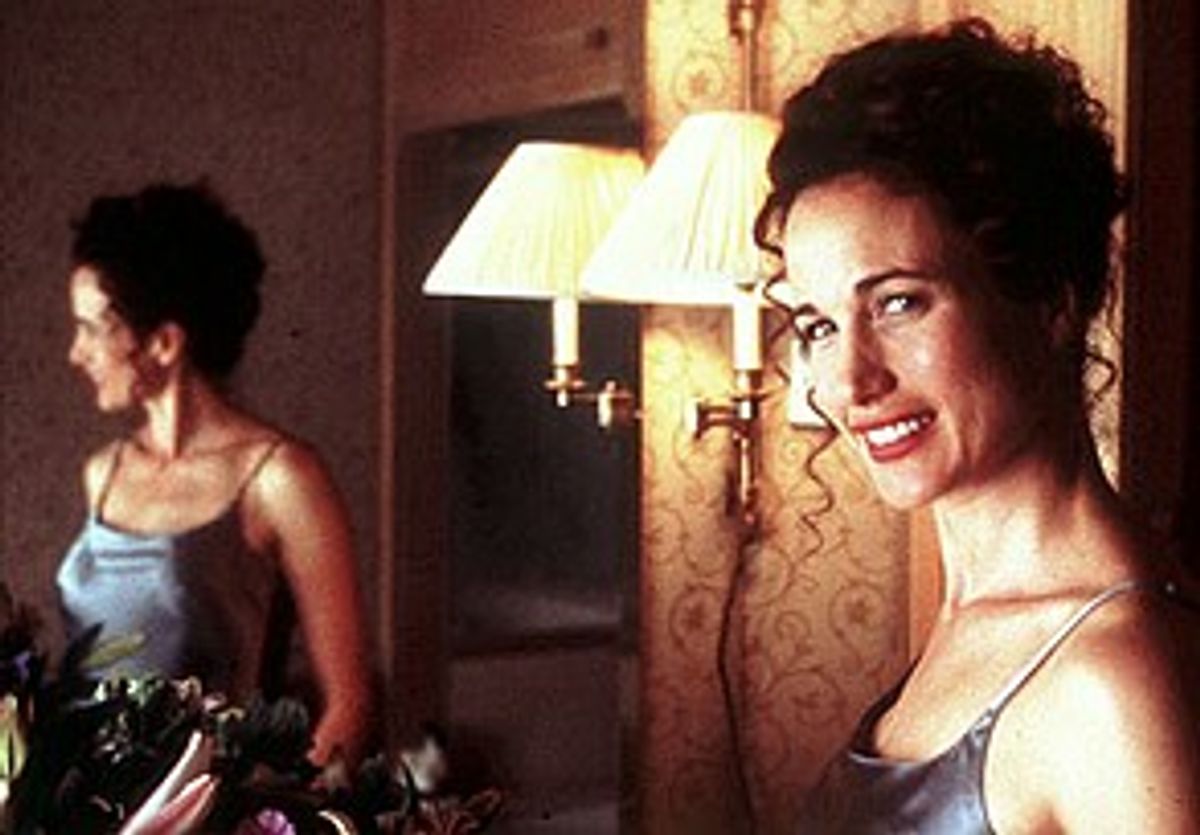 There's no way to adequately capture the horror that is "Crush" without giving away significant plot details, so if you're planning to see the movie without being hogtied first, stop reading here. The rest of you will surely want to know that this so-called women's movie wraps within its moist embrace a sweet boyfriend who comes to a sudden and tragic end (the only good man is a dead one?); cancer; get-togethers in which three woman friends smoke, drink red wine and commiserate (albeit cheerfully) about their deepest troubles; and a fair, if aging, maiden being ravished on a tombstone by a fine young buck.

Which is to say "Crush" is all downhill after that maiden, Kate (Andie MacDowell), gets diddled in the graveyard. That's the movie's high point, and it arrives so early that it sets up false expectations for the kind of movie "Crush" is going to be. Directed by relative newcomer John McKay, this purports to be a hip, fresh take on three single women's lives after they hit 40, and in its earliest moments, you think it might at least represent a valiant effort. But before long, its sinister, retrograde old nonwives' tales sneak up and bean you like a sandbag. There's not one tired old preconception about "what women's lives are really like" that isn't yanked and squeezed and squirted to exhaustion. "Crush" is like a shiny, brand-new milking machine hooked up to a tired old Bessie who just doesn't have anything more to give.

Technically, "Crush" isn't exactly a travesty of filmmaking, at least if you have a high tolerance for the "Four Weddings and a Funeral" formula. "Four Weddings" is clearly the model for this British-made film, although McKay, who also must take responsibility for the movie's wretched script, has cleverly disguised his inspiration (this movie features only one and a half weddings and several funerals). Astute viewers will also notice that two of the stars of "Crush," MacDowell and Anna Chancellor, appeared in "Four Weddings," too, and their performances here (like that of Imelda Staunton, who plays the third friend) are at least adequate.

But where "Four Weddings" served as pleasingly numbing entertainment, "Crush" takes so many weird, contrived steps and turns to score its points that you end up feeling jerked along by it. It appears to have been made with very little thought and even fewer good instincts, and its checkerboard tone shifts only add to its schizophrenia. Kate is the highly respected, highly visible headmistress of a school in a gossipy English village. When she embarks on an affair with a sexy former student, Jed (Kenny Doughty), who is 25 to her 40 (the whole thing gets cooking in that aforementioned graveyard), she finds that her two best friends, Molly (Chancellor) and Janine (Staunton) heartily disapprove.

Janine and Molly have great careers (Janine is a police chief, Molly a doctor), but neither has a particularly fulfilling love life. Janine, spunky and cheerful if a bit matronly, is a divorcée with several grown or almost-grown children, but she just doesn't meet the right kinds of guys. (She tells her pals how she snogged one fellow at a party, only to flee after realizing he was plain and boring -- men aren't the only ones who make shallow judgments about the opposite sex.) Molly seems to like money more than either men or sex. Her eyes light up when a male patient walks into her office, complaining that he fell off his yacht. But her pettiness and clueless cruelty are the two big funny-ha-ha traits that McKay gives her character. Actually, they're the only two traits he gives her character.

Kate, at least, is blessed with a few more. We know that as much as she denies it to her friends, she yearns to have a baby: That's made clear by the way she inhales the aroma of onesies in the local baby store, and by the way she huddles glumly on the couch as Sandy Denny's gorgeously mournful "Who Knows Where the Time Goes?" (a perfect case of a terrific song used clumsily) whirls on a nearby turntable.

The key to Kate's future happiness just may be her affair with Jed (who, being a mere man, has virtually no distinguishing character traits here, although Doughty at least manages to convey how much his character cares for Kate). Molly, with the more docile Janine tagging along, sets out to foil Kate's torrid romance, even after Jed proposes marriage to Kate, proving he's serious about her. Molly, clearly jealous and spiteful, tries to persuade Kate that Jed will only leave her for a younger woman. With Janine's help, Molly sets out to entrap true-blue Jed in a sexual game. Kate walks in on it and, misunderstanding Jed's intentions, throws him out of the house. (Last chance: Quit reading here if you're still planning to witness this dreadful movie yourself!) Jed is immediately hit and killed by a truck. And Kate, who becomes a zombie of grief, agrees, for no reason anyone on God's green earth can explain, to marry the humble, kind-but-dull vicar (Bill Paterson), who's had the hots for her for years.

Funny! Sad! Funny! Sad! "Crush" gives us emotional whiplash, using tactics more cheaply manipulative than anything William Castle ever dreamed up. You'll howl with laughter when Kate projectile-vomits on the vicar's wedding suit! You'll cry buckets when you see poor Jed's lifeless body laid out on the hospital table after a team of medics have, shaking their heads sorrowfully, acknowledged that their electropaddles cannot bring him back! At least a few Castle gimmicks would have given "Crush" some life. (How about "The Kleenex-o-meter," a mechanical doodad that dispenses a single tissue at each appropriate moment?)

But the movie's worst sin is the way, despite how horribly Molly and Janine have behaved to Kate, it insists that friendships between women are the most valuable treasures in this world. In the world of "Crush," women's deeply forgiving nature (just one of the dozens of female stereotypes the movie trades in) is a kind of suckerhood. So what if you've seduced your best friend's young lover out of sheer spite, setting in motion a chain of events that results in his death? That's no reason not to crumple into one another's arms by the end of the movie in a cacophony of apologies: "I behaved terribly!" "No, I behaved terribly!" The subtext is that it's OK for women to feel anger, but only for the prescribed measure of time. Then, peacemakers that we are, it's best to hug and kiss and get on with things. Wouldn't want to get hung up on negative energy, particularly where sisterhood is concerned. The movie's ultimate message is just a new, insidious version of the tired admonition that most sentient women spent much of the 20th century railing against: "Be a good girl now, and don't stir up any trouble!"

You can applaud the intentions of "Crush" all you want. But in terms of presenting "real" women over 40 on the movie screen, if this is the best anyone can do, I'll take the more common parade of 25-year-olds any day. "Crush" is the most depressing movie I've seen all year; in fact, I'm hard-pressed to name a movie aimed specifically at women that has ever made me feel as insulted and disgusted.

"Crush" is designed to make us weep, but in my case, the tears didn't come till well after I'd left the theater. In the subway station I came across a young busker singing Johnny Cash's "I Still Miss Someone," a song that was also memorably covered by Sandy Denny. His guitar playing was adequate, his singing wasn't much, but I gave him a buck anyway (and I had to talk myself down from $10). Because in a world where a picture like "Crush" can be made and marketed and sold to women everywhere as "their" kind of movie, a song like "I Still Miss Someone," no matter how badly it's performed, is a triumphant shout of real feeling, as opposed to a squiggle of pap squirted out of a tube. The kid who couldn't sing saved my day, simply because he'd chosen to sing the song in the first place, and sometimes sensibility counts for everything. Who knows where the time goes, and why do we have to waste so much of it on garbage that says nothing to or about us? And that made me cry.