The paper's Op-Ed pages have long been a platform for political assassination. But their latest target is a rival paper that is competing for a Pulitzer Prize. 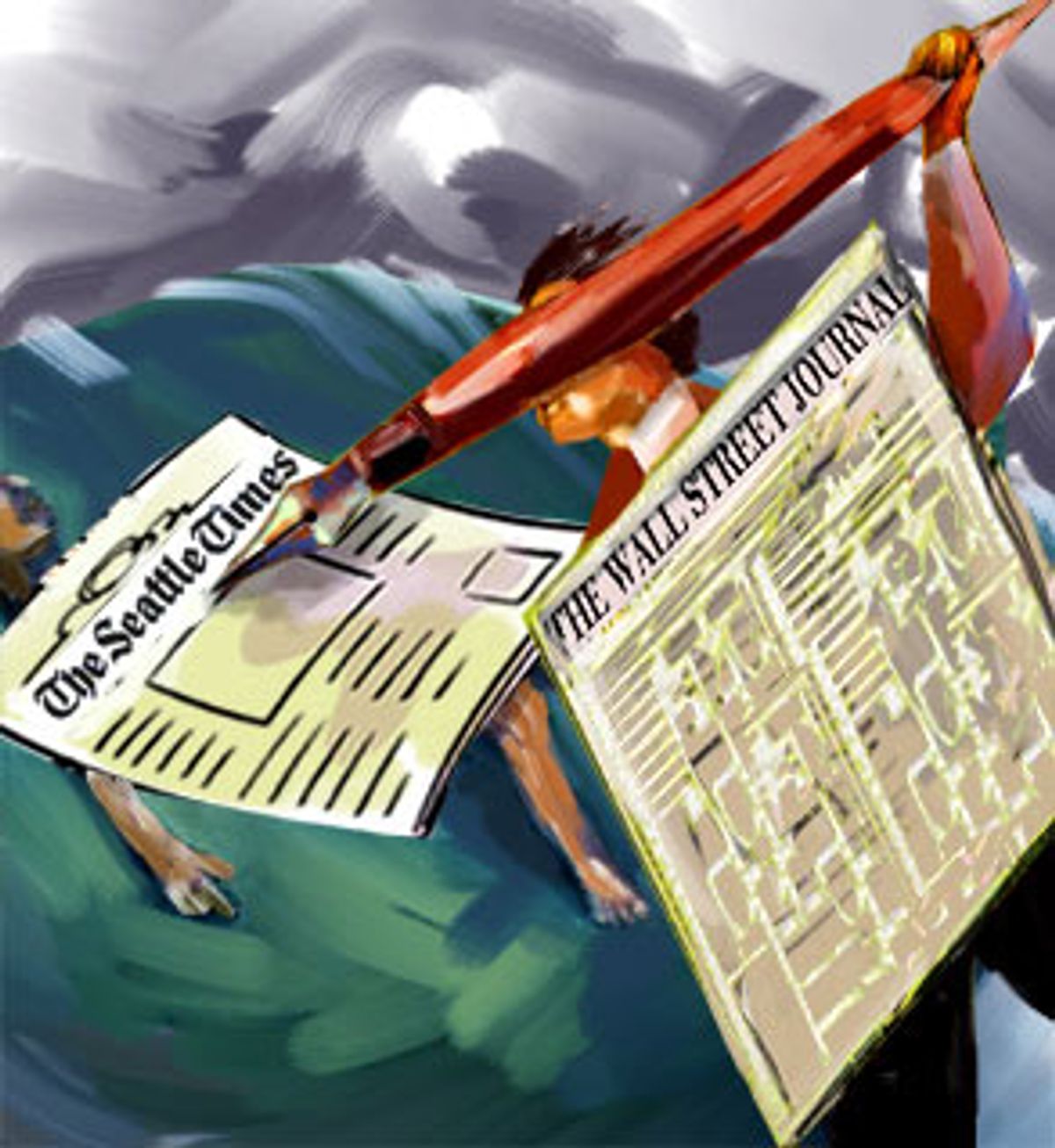 At 3 o'clock on Monday afternoon the sounds of champagne bottles popping open will be heard in a select number of newsrooms across the country as the winners of the newspaper industry's most prestigious award, the Pulitzer Prize, are officially announced. While the list of finalists is supposed to remain secret until the winners are declared, word always leaks out in advance. This year is no exception; among the reported Pulitzer finalists in the investigative reporting category is "Uninformed Consent," a six-part series that ran in the Seattle Times during March 2001. The report, written by Duff Wilson and David Heath, alleged that during the 1980s a number of patients at Seattle's prestigious Fred Hutchinson Cancer Research Center in Seattle (aka the Hutch) died while undergoing experimental bone-marrow transplation, and that patients were not informed of the clinical trials' risks or of the center's financial interest in those treatments. The series was years in the making and was based on an exhaustive review of 10,000 pages of documents as well as 100 interviews, and was overseen by an independent expert in bone-marrow medicine who reviewed it for accuracy. "Uninformed Consent" has already picked up scores of elite journalism prizes in the past few months, including a George Polk Award, a Goldsmith Prize for Investigative Reporting presented by Harvard's Shorenstein Center, and the Newspaper Guild's Heywood Broun Award.

Up until three weeks ago the series seemed to be a Pulitzer front-runner as well. But that changed on March 19, when Laura Landro, an assistant managing editor for the Wall Street Journal, penned a blunt critique of "Uninformed Consent" for the Journal's Op-Ed page. Titled "Good Medicine, Bad Journalism," the piece complained that the Seattle Times series was guilty of "gotcha" journalism and that the series' central allegation was "fundamentally false."

A cancer survivor who was treated at the Hutch 10 years ago and wrote about her experience in the book "Survivor: Taking Control of Your Fight Against Cancer," Landro lashed into "Uninformed Consent": "Rather than racking up prizes, it should be used as a textbook case on how the media can convey biased and misleading information about biomedical research. It left out crucial facts, distorted others and ignored everything that didn't fit its sensational thesis."

At first glance the column appeared to be a welcome break from today's media norm, where journalists, afraid of offending colleagues, are reluctant to critique one another's work by name, especially work as widely praised as "Uninformed Consent." A closer reading, though, reveals Landro's criticism was mostly hollow, and she seemed more intent on using the Wall Street Journal's influential Op-Ed pages to settle a personal score.

Even more startling was the fact that the broadside came an entire year after the Seattle Times series ran, but just weeks before the Pulitzer's 16 judges would make their final decisions. The Journal column appeared to be an unprecedented attempt to step in and derail a Pulitzer finalist.

Media observers point out that Landro failed to sufficiently back up her explosive charges. "There's no evidence given by Landro or the Journal that indicates any part of the Times series was 'fundamentally false,'" noted Sanjay Bhatt, a medical writer for the Palm Beach Post, and a board member of the Association of Health Care Journalists. (The association itself has taken no official position on the controversy.) "The Journal violated a basic journalistic principle: Show me, don't tell me."

Landro and the Journal have also come under fire for neglecting to inform readers of the full extent of her relationship with the Seattle medical center. As she acknowledged in her column, Landro was treated at the Hutch in 1992. But what she didn't reveal was that she and her husband created the Laura Landro Salomon Endowment Fund for the Transplantation Biology Program at the medical center, that they have continued to make generous donations to the center and that proceeds from her book go to the Hutch. "Laura didn't feel it had any relevance, and neither did the Op-Ed page," Wall Street Journal spokesman Steve Goldstein told Salon. That's curious, because when Landro first wrote a letter to the Seattle Times last year protesting "Uninformed Consent," she noted, "I am writing as a former patient [and] financial donor to the Hutch."

Defending his paper, Seattle Times executive editor Michael R. Fancher raised the obvious points of Landro's allegiance. "Laura Landro owes her life to the Fred Hutchinson Cancer Research Center. Unfortunately, Ms. Landro is unable to separate her own experience as a patient from her duties as a journalist," wrote Fancher in the pages of his own paper.

The Wall Street Journal's Op-Ed pages have long been a cauldron of unethical journalism. During the Clinton years, the Journal's editorial page czars filled their pages with wild-eyed, tabloid charges about the president and his wife's so-called involvement in murder plots and drug trafficking. But the Journal's news deputies and reporters could always roll their eyes and take comfort in the fact that everyone knew the newspaper's two universes were separate and distinct. The Landro episode, however, is more complicated because she's a senior member of the paper's news team, and statements from the Journal's spokesman suggest that her drive-by column spoke for the entire news operation.

Soon after Landro's column appeared, the Journal's Goldstein told the Seattle Post-Intelligencer, "It's her view of this particular issue. That's why it was written as an opinion piece and that's why it appeared on the Op-Ed pages." But after the paper began to feel heat for Landro's obvious attempt to keep a competitor from winning a Pulitzer, Goldstein took a tougher line, telling National Public Radio, "With the evidence that the Seattle Times had, that story would not have passed muster in the Wall Street Journal." Suddenly, Landro's column was not just her own opinion, but a reflection of the Journal's news judgment.

If anybody should be sensitive to the charge of trying to blackball a Pulitzer entry, it's the crew at Dow Jones. Consider this irony. Last month New York magazine reported that Wall Street Journal editors were irked because they felt their Enron reporters weren't getting enough credit for bringing the energy company down. Editors complained that their competitors at the New York Times and Washington Post went out of their way to praise a Fortune writer-- not the Wall Street Journal team -- for first disclosing Enron's financial woes. Why were the Journal's editors so miffed? Because they had award-winning hopes for their Enron series. As one angry, anonymous Journal editor told the magazine, "People are trying to queer the [Pulitzer] pitch for the Journal."

Imagine the outrage those touchy Journal editors would have felt if, instead of simply writing fawning profiles of Fortune's young Enron reporter, an assistant managing editor at the New York Times or the Washington Post had written a scathing column in late March about how the Journal's Enron investigation was "fundamentally false," and then denied it was an attempt to skew the Pulitzer judging. (Despite the paper's best efforts, it appears the Journal's Enron series is not a finalist in the Pulitzer's investigative reporting category.)

As the controversy over Landro's column grew, the Journal circled the wagons and responded with a sneering, unsigned editorial that only dug a deeper hole for the paper. Addressing Fancher's charge that Landro couldn't separate her personal cancer experience from her professional duties, the editorial quoted Landro as saying, "This is insulting, patronizing and also, frankly, sexist -- as if I am some bubbleheaded woman who can't separate emotions from professionalism."

Sexist? The Times never even hinted Landro's sex had anything to do with this controversy. Instead, it seemed Landro was grasping for a defense. And there was exquisite irony in the way Wall Street Journal editors, who've killed uncounted trees over the last decade attacking the scourge of political correctness, played the "sexism" card to defend the beleaguered Landro.

The Journal's editorial also harrumphed that "what really needs correcting is reporting standards in Seattle," which was odd since Landro's column didn't raise a single factual objection to the Times' reporting. The main thrust of her criticism was directed at what she charged was the Times' failure to put the Hutch's high-risk clinical trials in the broader context of bone-marrow experimentation in the 1980s. Where the Times' series saw duped patients, Landro preferred to see desperately sick people willing to take any chance to save their lives.

Landro did level one disturbing charge against "Uninformed Consent" -- an allegation that echoed one made by Hutch attorneys. Landro claimed that a Seattle Times reporter "appears to have overstepped the bounds of ethical reporting," by providing information to family members who were suing the Hutch after "Uninformed Consent" was published. But last week, deciding on that very issue, U.S. District Judge Robert Lasnik ruled neither the reporter nor the paper overstepped the "bounds of journalism." The judge denied the request by Hutch attorneys that the Times hand over communications between its reporter and family members.

Trying, after the fact, to carve yet another rationale for Landro's broadside, the Wall Street Journal's creative editorial suggested that the Hutch controversy was really about tort reform, insisting that all "Uninformed Consent" succeeded in doing was generating "speculative lawsuits" from surviving family members of Hutch patients who died during clinical treatment. Insisting it was "on the side of patients," the Journal argued, "more patients will suffer if medical advances are tied up in lawsuits or medical bureaucracies." But the editors will have a hard time convincing the families of former Hutch patients that their hearts are with them. During one questionable clinical trial at the medical center, 80 of its 82 patients died.

Finally, the Journal argued that the Seattle Times refused to print a letter Landro wrote the paper one year ago protesting "Uninformed Consent," because then the paper would have had to submit her letter to the Pulitzer jury. The charge makes no sense. Because if you go to the paper's "Uninformed Consent" Web site or scan old copies of the newspaper, you can read the scores of critical letters the paper has published, all of which, according to Pulitzer rules, must be submitted with the nomination if they contain "any significant challenge to the accuracy or fairness of an entry." That, and the fact that a Hutch-related organization had filed an extensive protest with the Pulitzer committee detailing the Times' alleged errors, makes it clear that award judges are well aware of outside faultfinding with the Times.

Landro and the Journal seemed particularly upset that the Times did not publish her letter last year, even though, as Fancher explained, it was among the "hundreds" the paper received in response to "Uninformed Consent." Worse, the Times "didn't acknowledge receipt of the letter," says the Journal's Goldstein. "If they had run that letter [last year] that would have been the end of it."

So dailies be warned. If a senior Wall Street Journal editor writes to complain about your paper's work, acknowledge receiving the letter -- better yet, run it in full, or suffer the consequences.