"We control the vertical. We control the horizontal." The creepiest series in TV history combined existential inquiry with a memorable monster menagerie. 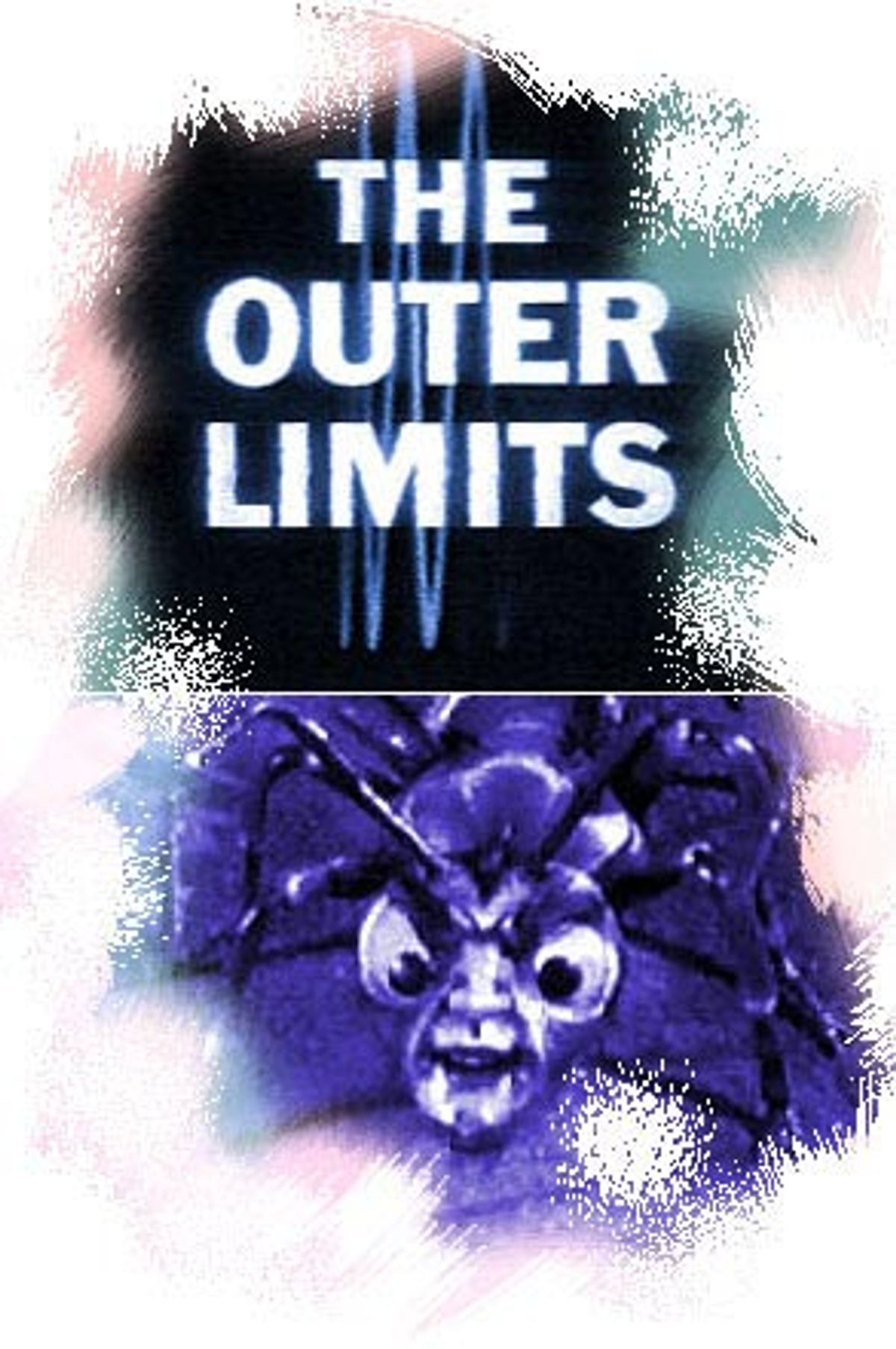 Not many television series consistently challenge their viewers, let alone risk alienating them by issuing ominous threats seconds into the broadcast. Yet by prefacing each of its episodes with the blithely unsettling incantation "There is nothing wrong with your television set," ABC-TV's early '60s sci-fi sucker punch, "The Outer Limits," did both.

This provocative opening statement, delivered in the gently metallic tones of the Control Voice (the show's omniscient, disembodied "host"), was only a harbinger of the aesthetic bravado and existential dread to come. For an hour each week between September 1963 and January 1965, "The Outer Limits" confronted audiences with edgy inquiries into the human predicament supercharged with expressionistic visuals, eye-popping (and frequently pop-eyed) monsters and resolutely adult themes. Its vivid mix of art and spectacle, humanism and pessimism and science and superstition was genuinely groundbreaking, and over the years it has proven both deceptively influential and virtually impossible to duplicate.

The series' pedigree was filled with the sort of disregard for convention its content implied. Independent producer and Wellesian whiz kid Leslie Stevens, who created the show as a forum for his oddball notions about science and technology, was variously a Broadway playwright, screenwriter, film director and New Age mystic. Stevens' dilettantish stamina resulted in so many projects before, during and after "The Outer Limits" -- including a film spoken entirely in Esperanto and a handbook for something called "electronic-social transformation" -- that he gave the term "line producer" a new meaning.

Charged with crafting his sci-fi anthology series for ABC, Stevens directed a pilot for "The Outer Limits" in late 1962 using a handpicked team of maverick artists, technicians and craftsmen, including composer Dominic Frontiere and future Oscar-winning cinematographer Conrad Hall (whose later credits range from "Cool Hand Luke" to "American Beauty.") The film, shot from Stevens' screenplay "Please Stand By" and later broadcast as "The Galaxy Being," introduced many of the elements that were to become earmarks of the show: a flawed outsider hero, a menacing but ultimately benevolent extraterrestrial who brings out the best and/or worst in the humans with whom it comes in contact, and a poignant, ambivalent finale.

Once ABC bought the pilot, Stevens turned over the day-to-day production duties and much of the writing to iconoclastic screenwriter and erstwhile tunesmith Joseph Stefano. Best known for transforming Robert Bloch's pedestrian pulp novel "Psycho" into a jubilantly perverse Freudian fever-dream for Alfred Hitchcock in 1960, Stefano -- who was anything but a science-fiction buff -- promptly molded the show's format to his own moody ends. (Stevens continued to run interference with the network and wrote and directed three more episodes.)

With a free-flowing id and the assistance of old-school, no-nonsense directors like Gerd Oswald and Byron Haskin, Stefano established "The Outer Limits'" uneasy tone and celebratedly gothic atmosphere in the stellar episodes he wrote. Among these were "Don't Open Till Doomsday," a deliciously unctuous take on frustrated desire featuring a belligerent phallo-vaginal blob, coitus interruptus on a cosmic scale and several Stefano-penned songs; "The Bellero Shield," a spin on "Macbeth" with a shimmering space creature as inadvertent Player King; "The Invisibles," in which crablike aliens botch a takeover of the human race by commandeering its most marginalized members; and "Nightmare," a prescient look at the internal and external bonds that disintegrate during wartime. Some of his other efforts, such as "A Feasibility Study," "The Mice" and "The Zanti Misfits" (which features the series' best-remembered monsters, a race of fist-sized ants with leering human faces), were less cohesive but no less distinctive.

Stefano was by no means the only "Outer Limits" writer, but his stamp is on every episode he produced. Standout entries like Anthony Lawrence's tender slice of time-travel fatalism, "The Man Who Was Never Born" (the negation in the title is wrenchingly literal by hour's end), and Meyer Dolinsky's troubling "The Architects of Fear," in which a group of misguided government scientists turn one of their own into a shambling, would-be space monster in order to establish world peace, are less overtly symbolic and psychoanalytic than Stefano's stories, but each trades in the same murky ethical dilemmas and nightmarish motifs that characterized his involvement in the show. Even such lesser works as William Bast's turgid galactic soap opera "Moonstone" and future "Chinatown" screenwriter Robert Towne's woefully underfunded "The Chameleon" benefited from his guidance. If Leslie Stevens can be said to have fathered the series, then Joe Stefano lovingly reared it.

The heady synthesis of Stefano's dark vision and Stevens' ethereal ambition made "The Outer Limits" a far richer experience than the other science-fiction and fantasy series of the era. While justifiably adored, shows like Rod Serling's jazzy, pedagogical masterwork "The Twilight Zone" and Gene Roddenberry's insta-kitsch classic, "Star Trek," persist largely because they never stray far from the rationalism that drives most American entertainment. Their human characters are fallible, impulsive creatures uniquely adept at screwing up, but every emotion, relationship and deeply held conviction they display remains in place at the end of virtually every episode. However comforting this may have been, it tended to refute the everyday experience of the viewing audience.

"The Outer Limits" wouldn't, or couldn't, cater to such needs. Stevens and Stefano had something much less conciliatory in mind for their show, and thus set it squarely in a universe ruled by labyrinthine pressures and transient pleasures, where meaning and morality were in constant flux and human beings fought desperately -- sometimes heroically -- to keep pace. This starkly recognizable yet distinctly off-kilter milieu made "The Outer Limits" television's most unabashedly modernist work.

The most successful and memorable device used to throw "Outer Limits" viewers off balance, of course, was its monsters. For better or worse, the creatures that figured in many episodes remain the show's most enduring association, well beyond any of the series' ethical or artistic innovations.

It was more or less planned that way from the beginning. In the canons for "The Outer Limits" -- a set of guidelines written for prospective screenwriters at the behest of ABC -- Stefano specified that each episode include what he called a "bear" to "induce wonder or tolerable terror or even merely conversation and argument." In the best episodes, however, the bears were more than simple story requirements meant to attract sponsors or frighten preadolescents: They served as surrealistic, symbolic manifestations of key story points -- when, that is, they weren't the key points themselves. Grotesque, beautiful or both, the monsters were the longing, befuddlement and temporal joy of human experience made distorted flesh, and their shocking and occasionally extraneous presence was as essential to the series as Stevens and Stefano's radical ethos.

To accomplish this, the bears fell into several distinct but far from absolute categories, including horrifically altered humans who reveal just how monstrous humanity can be (the hydrocephalic Übermensch of "The Sixth Finger," a refined aesthete with a radiation-wracked visage in "The Man Who Was Never Born" and a bulb-eyed megalomaniac known as "The Mutant"); shapeless, antagonistic blobs who, although thoroughly unappealing themselves, somehow manage to expose our deepest appetites (the aforementioned psychosexual lump from "Don't Open Till Doomsday" and a featureless, gelatinous whatsit that appeared in both "The Mice" and "The Guests"); belligerent, imperialistic alien species who know an easy mark when they see one -- or so they think (a race of leprous, immobile super-intellectuals in "A Feasibility Study," smug, smirking Cyclopes intent on writing the human race's "O.B.I.T." and a pair of murderous rocks -- yes, rocks -- in "Corpus Earthling"); and, finally, benevolent alien rogues whose gentle curiosity or misguided compassion throw the notion of "humanity" into ambiguous relief (ethereal, luminescent pacifists in "The Galaxy Being" and "The Bellero Shield," and insectoid/avian waking nightmares in, respectively, "The Children of Spider County" and "Second Chance").

Such high-minded purpose may seem beyond the reach of actors in rubber monster suits, but it's worth considering that had the "Outer Limits" pantheon of twisted demons and saints carried on in the usual ghoulish fashion, all bloodlust and lurking, they most likely wouldn't be as indelibly etched as they are in the species memory of television viewers.

If the "Outer Limits" bonanza of shocks and symbolism sounds too good to last, it was. Halfway through the first season, network brass became jittery over the show's disappointing ratings and unprecedented material and began pressuring Stevens and Stefano to tailor the series to more conventional tastes (read: "Lost in Space"). Already faced with steadily shrinking budgets, they left the series rather than submit to a bastardization of its original conception. They had completed a meager, albeit unforgettable, 32 episodes.

Under replacement producer Ben Brady, ABC's then vice-president of programming and a longtime producer of the popular "Perry Mason" series, the show became all but unrecognizable. Brady had little experience with or interest in the fantastic, and his handling of "The Outer Limits" was predictably catastrophic. Gone were Frontiere's mournful, pensive symphonic score and Hall's dynamic lighting and camerawork, to say nothing of Stefano's thematic preoccupations. In their place were wailing theremins straight out of '50s sci-fi movies, washed-out static master shots, and an addlepated "man mustn't meddle in God's handiwork" philosophy.

There were a few gems buried in the second season, including novelist and short-story writer Harlan Ellison's spare, apocalyptic chase-through-time thriller "Demon With a Glass Hand" (one of the series' finest hours), and Robert C. Dennis' wonderfully ambiguous "The Duplicate Man," a near-perfect throwback to the high standards of the Stevens-Stefano era that features a morally drained biologist who sends a clone to do his dirty work. But it was largely TV as usual, moderately retooled for sci-fi purposes -- Brady even managed to sneak in a Mason-esque courtroom drama called "I, Robot" that's impossible to sit through with a straight face. After just 17 more episodes, the show ground to a sloppy, indifferent halt.

It was an unfortunate end for a series that had broken new ground so early and so memorably. But while it was nowhere near as long-lived as "The Twilight Zone" or as much of a fan fave as "Star Trek," "The Outer Limits" has nonetheless maintained a small, fiercely dedicated following since its cancellation. It has been in near-steady syndication (it currently haunts the wee hours of the Sci-Fi Channel's lineup), and even spawned an "update" on Showtime in the mid '90s (although the less said about that bland, misbegotten hack job the better). Most intriguing of all, its echoes can be detected in such disparate cinematic works as each of the four Alien movies, both Terminators, and arguably the paranoiac oeuvres of David Lynch and Kiyoshi Kurosawa.

Even more than these films, though, the series' use of pulp accoutrements as portals into complex intellectual and moral territory was its undeniable trump card. If, as Pauline Kael once wrote, pulp "can take a stronger hold on people's imaginations than art, because it doesn't affect the conscious imagination, the way a great novel does," the genius of "The Outer Limits" was in its ability to do, and to be, both.

Mark Holcomb is a freelance writer living in Brooklyn, N.Y. His work appears in the Village Voice and indieWIRE.