In the crossfire: "Crossfire"

CNN thrilled lefties by hiring Carville and Begala, but the show is too long and too incoherent. 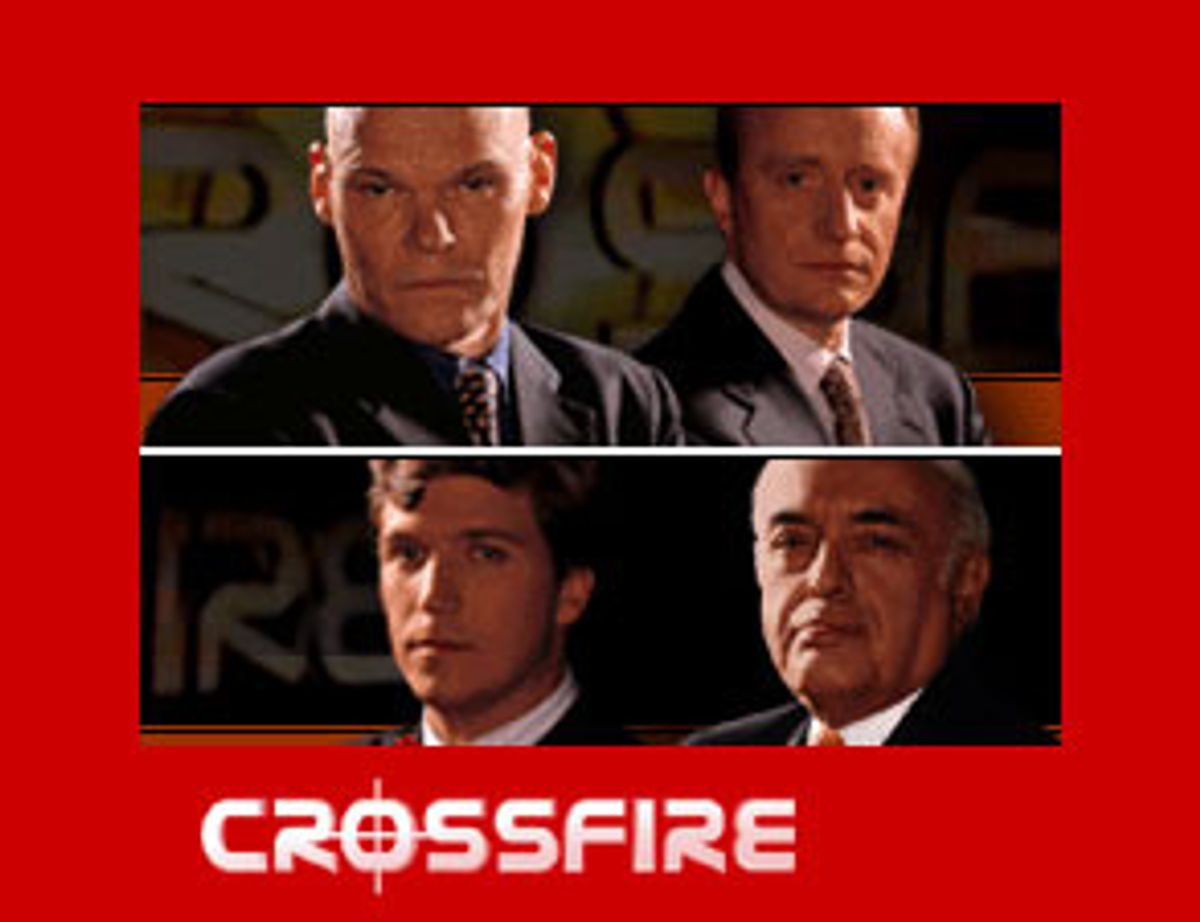 Last week, on the debut of CNN's much-hyped, expanded version of that granddaddy of gabfests "Crossfire," Paul Begala, the Democratic operative and new host, excitedly launched into a question for Senate Majority Leader Tom Daschle, D-S.D.

"The problem has been the way Bush has run roughshod over the executive branch. He, for example, I'm told, refused to brief you and other leaders from both parties on Capitol Hill about his shadow government. He has refused to allow the Government Accounting Office, a nonpartisan agency, to review the records of the Cheney energy task force. He has refused to allow our homeland security director, whose salary we pay, to come and testify before the Congress that pays his salary on behalf of the American people," said Begala.

Gathering steam, he ended with a flourish, addressing his commentary more toward conservative co-host Tucker Carlson: "The question is this: When is the Congress going to stand up to these authoritarian acts from a right-wing unelected president? That's a question. You asked for a question, Tucker. That's a question."

The calculated outburst made for good TV, and many liberal viewers at home surely applauded, gratified someone was venting their frustration. CNN's move to hire both Begala and former Clinton White House pundit-partner James Carville has been the subject of much rejoicing among the media-obsessed on the left who didn't feel the previous host, Bill Press, stood up well to his alternating co-hosts on the right, Bob Novak and Carlson. (Not to mention the unbelievably toothless performance of Alan Colmes, the left side on Fox's "Crossfire" rip-off, "Hannity and Colmes.")

The lefty activists on Democrats.com even initiated a flower-sending campaign, urging friends to send "a Fair and Balanced Bouquet" to thank CNN executives for hiring the Democratic dream spin team.

Gore and Nader voters have been watching with growing alarm as cable news commentary tilts further and further to the right. Emboldened by Fox News Channel's success, anxious producers are now preoccupied with catering to the small number of dedicated, mostly middle-age, white, male, conservative viewers who tune into cable news.

CNN has been among the most aggressive in its lapdog approach, particularly since Walter Isaacson took over as the network's chairman last year. Among his first official acts was to meet exclusively with Republicans on Capitol Hill in a reported attempt to patch up relations between CNN and longtime stalwart conservative critics. (No word yet when Isaacson will give an airing to Democratic leaders.) And last summer, when CNN wasn't busy tarnishing its image with nearly around-the-clock Chandra Levy coverage, the news operation was reportedly trying to lure Rush Limbaugh.

Then, during the war on terrorism in Afghanistan, Isaacson, with his finger pressed firmly to the wind, issued this memo to staffers: "As we get good reports from Taliban-controlled Afghanistan, we must redouble our efforts to make sure we do not seem to be simply reporting from their vantage or perspective. We must talk about how the Taliban are using civilian shields and how the Taliban have harbored the terrorists responsible for killing close to 5,000 innocent people." As though, left to their own devices, CNN reporters and producers would instinctively want to tell the conflict through the eyes of a radical, murderous Islamic cult.

More recently, CNN has ushered self-appointed conservative morality expert William Bennett, head of Empower America, onto its morning show where he appears as a contributor. Since signing on in March, Bennett has been given free reign to condemn Jimmy Carter, feminism, homosexuality, left-wing college professors and Arabs.

And no, CNN has not bothered to hire his equivalent on the left. (Does Noam Chomsky even do TV?) Instead, the morning show's other outside contributors consist of a sportscaster and a comedian.

That's why Carville and Begala's arrival was met with such appreciation in some quarters. Of course, a real sign of solidarity would be to actually watch the show, but that may be asking too much.

The new, bulked-up 60-minute version ("New blood. No gloves. The new crossfire."), filmed in front of a live audience, is often a tedious gobbledygook of shtick and shouting.

The problem is not the hosts, both old and new, who can still set off occasional sparks. Novak ("the Prince of Darkness") remains entrenched in his three-piece suits and cloying attempts at semisincerity (to Daschle: "I can't tell you how disappointed I am in your answer, Senator, because you know how much respect I have for you").

Begala ("the Lone Star Lefty") flashes his don't-hit-me smile after every Bush-stole-the-election crack. Carlson ("the Bowtie Brawler") stars as entertaining smartass (to Nader: "I have no doubt that wind power will some day solve all our problems").

And Carville ("the Ragin' Cajun"), with his cue ball top and shaded glasses, comes off as the Hunter S. Thompson of the group, eager to toss grenades. On his first night, Carville could barely wait to insult his new boss, AOL Time Warner CEO Richard Parson, who as co-chairman of the Social Security Commission had "fraudulently misrepresented facts," Carville said.

Later, he got under Carlson's skin.

Carlson: "James coming on to me over here."

Carville: "Oh, pretty boy, you are a pretty boy."

Carlson: "Thank you, James. That's like the fifth time."

"The Newshour" it is not.

The dilemma? The show's greedy new hourlong format is already proving deadly. As the show tries desperately to fill the time, the potted-plant audience members remain mostly silent throughout.

By abandoning the old format, in which each night's topic was relatively well defined, "Crossfire," never a bastion of coherency, now wants to talk about everything at once.

Here's what the new "Crossfire" covered on just its opening night: the Israeli incursion into the West Bank, Bush's role in the region, whether the U.S. should send troops to the region, appeals court judicial nominations, drilling for oil in Alaska, Social Security reform, President Clinton's legacy, airport security, campaign finance reform, what Democrats stand for, is Bush doing enough to reelect Republicans and graduate rates for college basketball players.

Only a Senate aide would want to digest that much spin every night.

Also, the tone of the new show is off, with CNN's now ubiquitous, let's-be-entertaining meter turned up too high. Last Tuesday night, co-hosts Carlson and Begala came out onto the expansive "Crossfire" set bantering about how that night's Ralph Nader and Pat Buchanan appearance ought to be pay-per-view. (The best exchange -- Carlson: "I mean, can you run G.M. more efficiently than G.M.?" Nader: "Of course. Are you kidding? Jesus Christ [muttered]. Listen, they lost almost half the market.")

Then they awkwardly segued into a discussion about runaway violence in the Middle East.

Out from backstage, greeted by applause as if they were contestants on "Family Feud," strolled Rep. Robert Wexler, D-Fla., and Hassan Abdel Rahman, the chief PLO representative of the United Nations. (The current focus on the Middle East has thrown a wrench in "Crossfire's" left vs. right blueprint approach. On this night Carlson, Begala and Wexler all teamed up on Rahman, while two nights later liberal Carville argued with guest Rev. Jesse Jackson about whether Yasser Arafat was a terrorist, and Novak chastised Rev. Jerry Falwell's blind support of Israel.)

After the two guests left, Carlson and Begala tried out some jokes about obesity being declared a disease, and Playgirl planning a men of Enron photo shoot. Begala: "Come on, guys. It's time to go for the full Monty." By show's end, viewers half expected Carlson and Begala to walk out to the edge of the stage, wave to the crowd and say, "Good night, everybody!" like it was a '70s variety show.

It's clear a show like this needs a long-running presidential campaign -- which also devolve into silly, pseudo-serious productions -- to supply an oxygen source. Without it, "Crossfire" is forced to hop from Middle Eastern diplomacy to debating whether Americans are getting more rude. For staying tuned to that mishmash, "Crossfire" viewers are the ones who should be receiving flowers.