"May prick nor purse never fail you"

This weird history of two men's sex clubs in 18th century Scotland cries out for Mike Meyers and John Cleese. 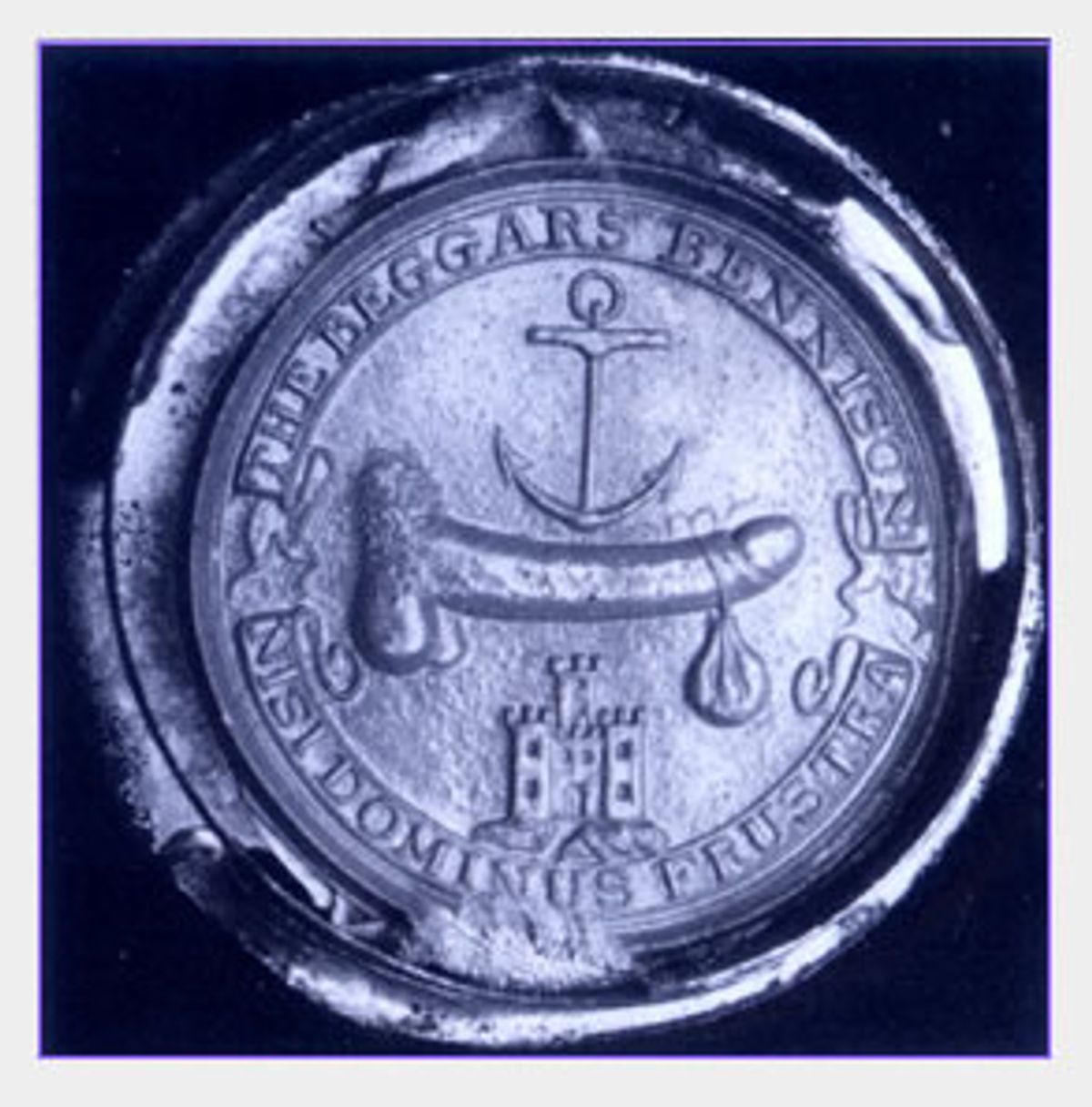 Thank God for John Cleese and Mike Myers. There are times when just the thought of them helps make sense of it all. This is such a time. I've been reading "The Beggar's Benison: Sex Clubs of Enlightenment Scotland and Their Rituals" by David Stevenson ("at present working on a biography of Rob Roy"). It's an account of two 18th century men's clubs organized around "the joys of libertine sex" and frolicking in the "Colony of Merryland" ("merry" was a euphemism for sex in the 1700s).

Many of the members were power players during the golden age of men's clubs -- upper-class gentlemen, earls, nobles, "rich lairds," baronets and viscounts. They joined clubs for the same social reasons men join now, but the groups Stevenson writes about offered activities beyond the ordinary. In the Beggar's Benison, masturbation was the favored diversion (everybody kept their hands to themselves). The Wig Club, founded in 1775 Edinburgh, was named for its venerated relic -- "one renowned Wig worn by the Sovereign composed of the Privy-hairs of Royal courtezans." The Beggar's Benison began in 1732 in the town of Anstruther in the East Neuk of Fife on the Firth of Fourth. See what I mean about Cleese and Myers? And it gets better.

Anyway, Stevenson apparently got a bug in his bagpipes to produce the definitive history of these two clubs and he's succeeded, after a fashion. His tome is not only exhaustive, it's exhausting. A couple of passages had me on the verge of tears, gasping and clawing the air like Halle Berry. I will go out on a limb and say that Stevenson's shall be the reigning account from now to eternity. Unfortunately the book's earnest, methodical style, and lack of chases, explosions or gunplay, makes it drag a little, but that can be fixed. Simply open it at random, read one of the anecdotes that Stevenson has mercifully sprinkled throughout and then think of Myers in his Fat Bastard role at the center of the scene while Cleese looks on.

Give it a try. Here, quoting the Beggar's Benison's own records, Stevenson describes the club's initiation ceremony: "The novice was 'prepared' in a closet by the recorder and two remembrancers 'causing him to propel his Penis until full erection'. He then came out of the closet, a fanfare being provided by 'four puffs of the Breath Horn,' and placed 'his Genitals on the Testing-Platter', which was covered with a folded white napkin. 'The Members and Knights two and two came round in a state of erection and touched the novice Penis to Penis.' A special glass with the order's insignia on it was then filled with port and a toast drunk to the new member, and, in a brief parody of a church service, he had to read aloud an 'amorous' passage from the Song of Solomon and comment on it. Investment with sash and medal followed, as the sovereign and other members intoned the benison or blessing: 'May Prick and Purse never fail you.'" All that's missing is Fat Bastard's lilting brogue chiming in with, "I'm dead sexy!" while Cleese meaningfully cocks an eyebrow.

Stevenson spends most of his time on the Beggar's Benison, but the Wig Club was just as wiggy. The good and sociable gents of that group liked to wile away their evenings drinking, dining, gambling and paying homage to the wig, which had its own custom-made case and a head it rested on that was fabricated by the local shoe and prosthetic leg maker (head and case still exist; wig has mysteriously vaporized). The wig was made from the pubic hair of Charles II's mistresses. "According to one tradition," Stevenson says, "each member of the Wig Club had to provide locks of pubic hair suitably harvested to be added to the wig, as proof of having triumphed sexually. Whether this proof of ability on matters sexual is more or less distasteful than the Benison's masturbation may be debated."

Stevenson is something of a scold (it's his most endearing quality) and his harrumphing at the club members' bad behavior is one of the book's most entertaining elements. Also, his expressions of exasperation at the clubs' poor record keeping (give 'em a break, they had their hands full!) and the paucity of accurate research materials are fleeting moments of sunshine in a tale that spends much of its time dryly cataloging dusky activities related to the nether regions with unconvincing disapproval.

At one point, less than 30 pages into the text, dismayed at the shoddy materials he has to work with, it seems he may abruptly scrap the project just as he's piqued our curiosity: "[The Benison's records] do not form a happy foundation for scholarship. The arrangement is chaotic, the information given often consists of random snippets, the editorial contributions often wander into complete irrelevance and are sometimes self-contradictory," Stevenson fumes. "A healthy first reaction is to trust nothing. With a commentary containing much inflated assertion but little reference to sources, and some obvious factual errors, the safest thing to do might seem to be to walk away."

Wait a second, come back here, good sir. You've got another 220-odd pages to go. Are you or are you not "emeritus professor in the Department of Scottish History at the University of St. Andrews"? Of course you are! Now, buck up, my man. Do you think Liam Neeson or Mel Gibson would stalk off in a sulk just because they had a wee mess to cope with? Look, if we can turn this book into a screenplay and get Christopher Guest to direct, not only will your labors be rewarded, we can all move to Merryland. How can a cross between "Rob Roy," "Braveheart" and "Boogie Nights" fail to be anything but box office gold?

To his credit, Stevenson does stick with his onerous chore and the world is a merrier place because of it. But as historians often do, he has a theory and his insistence on bludgeoning us with it is what makes reading the book resemble a walk through the moors after nine weeks of rain. It's a bit of a slog, but it has its redeeming moments. Stevenson insists on seeing a bunch of besotted blokes beating off as a political statement and his analysis of their activities' supposed relation to social protest, free trade and Jacobitism makes this an excellent weapon in the war against insomnia.

"Like many a club with mock pretensions to importance," Stevenson writes, "the Beggar's Benison felt an urge to create grandiose origin myths to support its claims," (pot meet kettle, kettle, pot). The clubs' name, he explains, comes from the myth its founders invented in which James V, who was something of a rounder, "notorious for bedding women of all ranks with promiscuous zeal," gets carried across a river by a peasant woman because he "didn't want to get his feet wet." According to Stevenson, in days of old poor women would wait by rivers for this very purpose. After the king, who was traveling incognito, reached the other side, he paid the woman and she thanked him with this blessing (or benison): "May your purse naer [never] be toom [empty]/ And your horn aye [always] in bloom." But what he really paid her for, Stevenson says, was a good and proper shagging. That's why the wags of the Benison, who had an insatiable appetite for double entendre, transformed the saying into their motto as used in the initiation described above ("May Prick nor Purse never fail you"). "At first sight," Stevenson writes, the beggar woman's benison "may be a blessing on the king's wealth (the gold in his purse) and hunting horn, but behind this lies the blessing of his testicles (in the purse of the scrotum), and his erect ('in bloom') penis."

When they got a bottle or two of good claret on deck, the Benison clan liked to raise their voices in bawdy song or give their rapier wits a workout. "The Beggars dined and drank in an atmosphere of happy obscenity," Stevenson says, "delighting themselves with how shocking they were being. The air was full of sexual innuendoes ranging from basic crudity to some quite ingenious and witty efforts. In small doses the material can be quite entertaining, but it is wearisome in bulk." There he goes again, what a grump. But wait, here he comes right back to quote one of the Benison's favorite lyrics, their bastardization of a popular love song -- "Bonnie Maggie, Braw Maggie, Bonnie Maggie Lauder!/ She pisht upon the puir folk and farted on her faither!" -- and two of their toasts: to "Girls lecherous, kind and willing" and this, which he delicately describes as "specifically, though allusively, genital": to the "mouth that never had a tooth ache." Those were the good times.

But the two clubs were about more than pubes, jerkin' the gherkin and closely inspecting the southern anatomy of the occasional village girl who was paid to disrobe for viewing -- and only viewing -- at meetings. There were also semi-serious sex lectures, ludicrous rituals and elaborate accessories, some of which have survived in museum, university and private collections, making the book's 16 pages of photos a naughty treat.

Stevenson seems to have cataloged every scrap of paper and record related to the clubs, as well as the pornographic medals, salacious wax seals, a penis and testicles-shaped drinking glass, punch bowls, phallus emblazoned diplomas, a club goblet, a bible with an image of two vulva engraved around its keyhole ("guess what the 'key' to open the lock would be?" Stevenson muses) and even a snuff box ostensibly given to the Beggar's Benison by George IV. Less ostentatious than the Wig Club's hairpiece, the box contains the pubic hair of just one of the king's mistresses. (The fascination with intimate fur is gone into in detail in a section titled "The Allure of Pubic Hair.")

The most important of the Beggar's Benison artifacts, Stevenson says, were the Test Platter and Breath Horn used in the club's initiation ceremonies. The large pewter platter, made "in 1783 or later" is engraved with "the biblical reference to 'A Way of a Man with a Maid' and the image of a penis inside a vulva; "a crudely scratched inscription on the underside of the platter asserts obscenely how 'many a six inch prick in full bloom' had performed on it." The Breath Horn was so called, Stevenson writes, because "the breath of the horn in this sense was presumably semen, the puffs simulating ejaculation." It's strangely inscribed, "My breath is strange."

All in all the Benisons might have been a little more solemn than the merry men of the Wig Club. Stevenson tells of one "Wig Club meeting [where] it was ordered that all members were to drink 'to the Wig out of the Prick Glass," which, just in case things weren't achingly jocular enough, may have been a trick glass, "designed so that part of the contents would be released suddenly when the glass was raised to a certain angle, so drenching the drinker." They thought of everything!

With his arch-scholar approach to a rollicking, picaresque topic, Stevenson almost succeeds at neutralizing his subjects' puerile sense of the absurd, but the randy giddiness and gross fun could perhaps be revitalized if we could only get the Breath Horn into the hands of John Cleese and the Test Platter into the pudgy paws of Fat Bastard. Ah yes, m'lords, what a noble thing that would be.