Top Democrats slam him for running a lackluster campaign in 2000 and blowing it in Florida. But he still dominates in polls of Democratic voters. Can Al Gore rally the troops for another run? 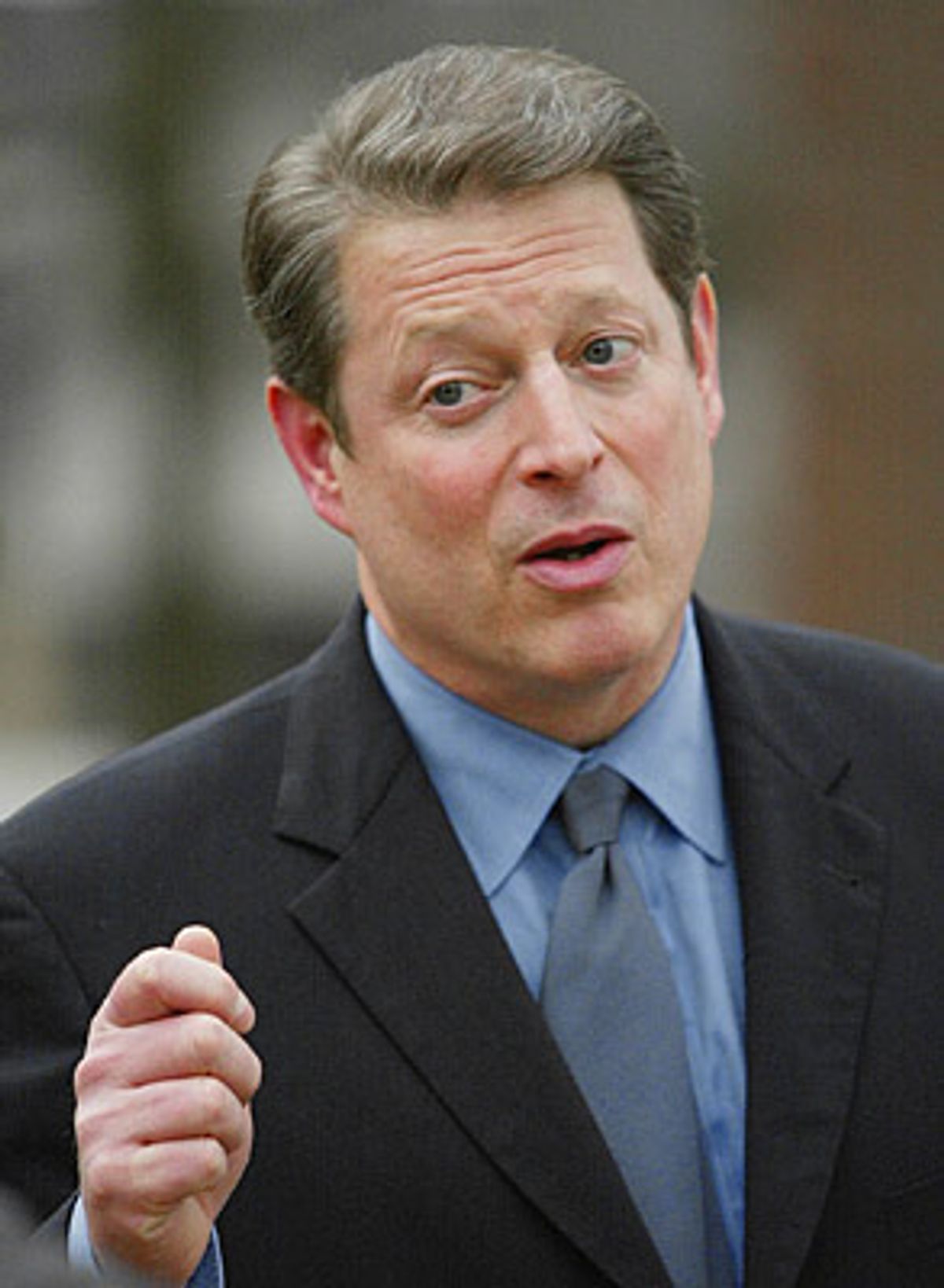 When Al Gore kicked off his presidential campaign in 1999, he enjoyed near-unanimous support from his own party, including the Democrats' chief officeholders, political operatives and the most deep-pocketed fundraisers. The only problem appeared to be the voters, who didn't seem to have particularly strong feelings about Gore one way or another.

If Al Gore runs again in 2004 -- and by all signs, that's just what he's gearing up to do -- he'll face one of the most dramatic reversals of fortune in modern political history. Now it's the insiders, the members of Gore's 2000 leadership circle, who appear to be cozying up with other aspirants or busying themselves in private-sector jobs with little desire to join another national campaign. Among top Washington power players who once carried Gore's water, the former veep is now viewed not so much with anger -- post-2000 disappointment has faded too much for that -- but with a sort of contemptuous pity. "He's a front-runner who no one wants to work for or give money to," a former staffer says with a chuckle.

But as Gore's former campaign strategist Robert Shrum told another high-level Democrat recently, "Everybody is against Gore -- except the voters." Suddenly, Gore's strength now lies with the Democratic Party's electoral base. And he continues to poll much higher than any potential competitor for the 2004 nomination: In a March 27 Zogby poll, Gore won the support of 27 percent (followed by Sen. Hillary Clinton at 20 percent and Senate Majority Leader Tom Daschle with 6 percent) -- very similar to a CNN poll a week before, which Gore led with 26 percent, followed by Sens. Clinton and Daschle at 19 and 8 percent, respectively. And his closest competitor, Hillary Clinton, has unequivocally ruled out a presidential run (at least in 2004).

This Saturday, Gore will make his most direct appeal to potential voters when he is expected to level his toughest and most outspoken critique of the way President Bush has managed the country since moving into the White House. And while Gore's spokesman Jano Cabrera remains perfunctorily noncommittal when asked whether his boss is gearing up to run in 2004, even Democrats who had been skeptical that Gore would make a fifth run for national office now appear increasingly confident that he will.

But not with the same top circle of advisors who surrounded him the last time -- most of whom are unwilling to answer any questions about Gore.

Shrum and his colleague Tad Devine were central players in 2000: Shrum as message-guru, Devine as a head of day-to-day operations. Though neither would comment for this story, both are now rumored to be angling to land spots on the campaign team now being assembled by North Carolina's fresh-faced freshman Democratic senator, John Edwards. "Shrum's dying to get into Edwards' campaign," says one high-profile Democrat, who, like everyone else interviewed for this story, asked to be anonymous. (Presidential politics is often too small a clubhouse for people to tell tales in the open.) "But he's conflicted because Gore made him millions [in 2000]." Shrum is trying to keep his wooing of Edwards out of Gore's line of sight, says this source -- though apparently not too hard, since it's a largely open secret in Washington.

Shrum and Devine aren't the only former members of the Gore high command who are giving him the slip this time around. Donna Brazile, Gore's campaign manager through most of the 2000 race, says she is "staying neutral" because she's now heading the Democratic National Committee's Voting Rights Institute. Mike Whoulley, Gore's ground-level organizer in 2000, is a Massachusetts native who already had longstanding ties to his fellow Bay Stater, Sen. John Kerry, D-Mass. With Kerry certain to run in 2004, most assume that Whoulley will be in his camp. Whoulley, who helped run the Florida recount battle for Gore, was part of a kick-ass faction that made no secret of its dismay with the vice president's cautious, legalistic and ultimately losing strategy in the Sunshine State.

Jill Alper and Nick Baldick -- two other high-profile members of Whoulley's political consulting firm, the Dewey Square Group, who also worked for Gore in 2000 -- are already working with Kerry and Edwards, respectively. And former Commerce Secretary Bill Daley, Gore's sometime campaign chairman in 2000, also seems unlikely be part of another Gore run, according to campaign veterans who worked with him closely.

Where loyalty to Gore remains considerably more pronounced is among the middle-echelon staffers who made up the heart of his 2000 campaign. And in these ranks, Devine is a favorite whipping boy, with Shrum a close second. Gore staffers' main grievance against Shrum and Devine is that the highly paid political managers demonstrated insufficient loyalty to the candidate, combined with a string of complaints about how Devine in particular helped run the campaign.

"I firmly believe that we owe 90 percent [of what went wrong with the campaign] to Tad Devine and [Gore pollster] Harrison Hickman," says one senior member of the campaign's political operation. "They didn't coordinate with anyone and you had to put a gun to their heads to get them to know what was happening in the battleground states."

Devine gets criticized for a cheerful obliviousness; he was notorious for kicking off staff meetings on a reflexively upbeat note, even when the campaign was clearly going in the opposite direction. According to several high-level sources in the campaign, in mid-October 2000, as Gore's iffy performances on the stump were finally beginning to worry senior staffers, Devine told a bewildered meeting of top-level campaign hands, "I feel really good about where we are right now." To which pollster Stan Greenberg, who joined the campaign in August 2000, shot back, "Well, then you're stupid, because we're losing."

According to bitter Gore 2000 staffers, Shrum and Devine were disengaged down the stretch and started dumping on the candidate almost before the ink on the Supreme Court's Bush vs. Gore decision was dry. At least that's what loyalists say in private -- none of them will go on the record with their complaints. They charge that both Shrum and Devine fed negative information about Gore to reporters on background. "You can't prove it, but that's what all of us think," says one.

But even many of the loyal junior officers who served in the Gore campaign have now fanned out across the country to work on other Democratic campaigns, or have left politics altogether, and they may be less than willing to come back for a rerun of the rocky 2000 race.

Some former Gore campaigners have taken jobs on Capitol Hill, and others are hawking their services in the private sector or simply moving on with their lives. A cluster of them are now working to reelect Daschle protégé Sen. Tim Johnson, D-S.D., who has been targeted by the Bush team. Gore's former national field director, Donnie Fowler, now runs TechNet, an association of Silicon Valley bigwigs. Chris Lehane and Mark Fabiani, two of Gore's principal 2000 spin doctors, have spent the last year careering around California politics, making fat paychecks for helping California Gov. Gray Davis spin the California energy crisis, among other projects. Not a few will trash Gore at the first opportunity, but many remain surprisingly loyal. Their commitment to him either transcends or ignores the plodding and uninspired qualities of Gore's last run.

"I feel grateful and loyal to him for giving me the opportunity that he did," says a senior member of the 2000 campaign's political operation. "He deserves my loyalty until he directly does something not to deserve it."

Another senior member of the campaign's press operation seconds the sentiment. "The campaign was a grueling experience," he says. "There's a very fierce loyalty to the Gores and if push came to shove, a lot of us would feel like, hey, let's go one more round. A rematch with Bush would be a kind of holy war."

Still, loyalty isn't the same as enthusiasm, and Gore clearly doesn't inspire widespread excitement among the Democratic troops. Some may not defect to another candidate, but simply sit out 2004 altogether. "There are a lot of former staffers out there who won't work for Gore but have enough attachment to him that they probably won't work for anyone else either," says a veteran of the Clinton White House who worked for Gore in 2000. "For a lot of them that will probably just mean staying in the jobs they are in now."

The question ex-staffers have a tough time answering is: Why would another Gore campaign be any different the second time around? The standard complaint from loyalists is that the 2000 effort was too top-heavy with mercenaries who endlessly squabbled among themselves and were disloyal or self-serving to boot. Gore was not able to break through with a message that electrified his campaign, much less the electorate. Perhaps without the benefits of incumbency and the burden of Clinton, they reason, Gore could loosen up and fight a more feisty campaign.

But as even these staffers concede, the core reason why the campaign became top-heavy and disorganized was Gore himself. Every presidential campaign will have a mix of mercenaries who are with the candidate as long as he is winning, and others who are loyalists who will be with him to the end. A really good candidate -- a Clinton, for instance -- can even convert many from the first category into the second. Gore's problem was that he had very few people in the second category. And it showed.

"I think it was mainly about him," says one high-level Clintonite who didn't work on the Gore campaign, and remains ambivalent about Gore. "It was about his personality. He is a guy who doesn't open up particularly easily to people, or trust people and therefore doesn't build trust easily. He has a pretty small circle. And that has consequences."