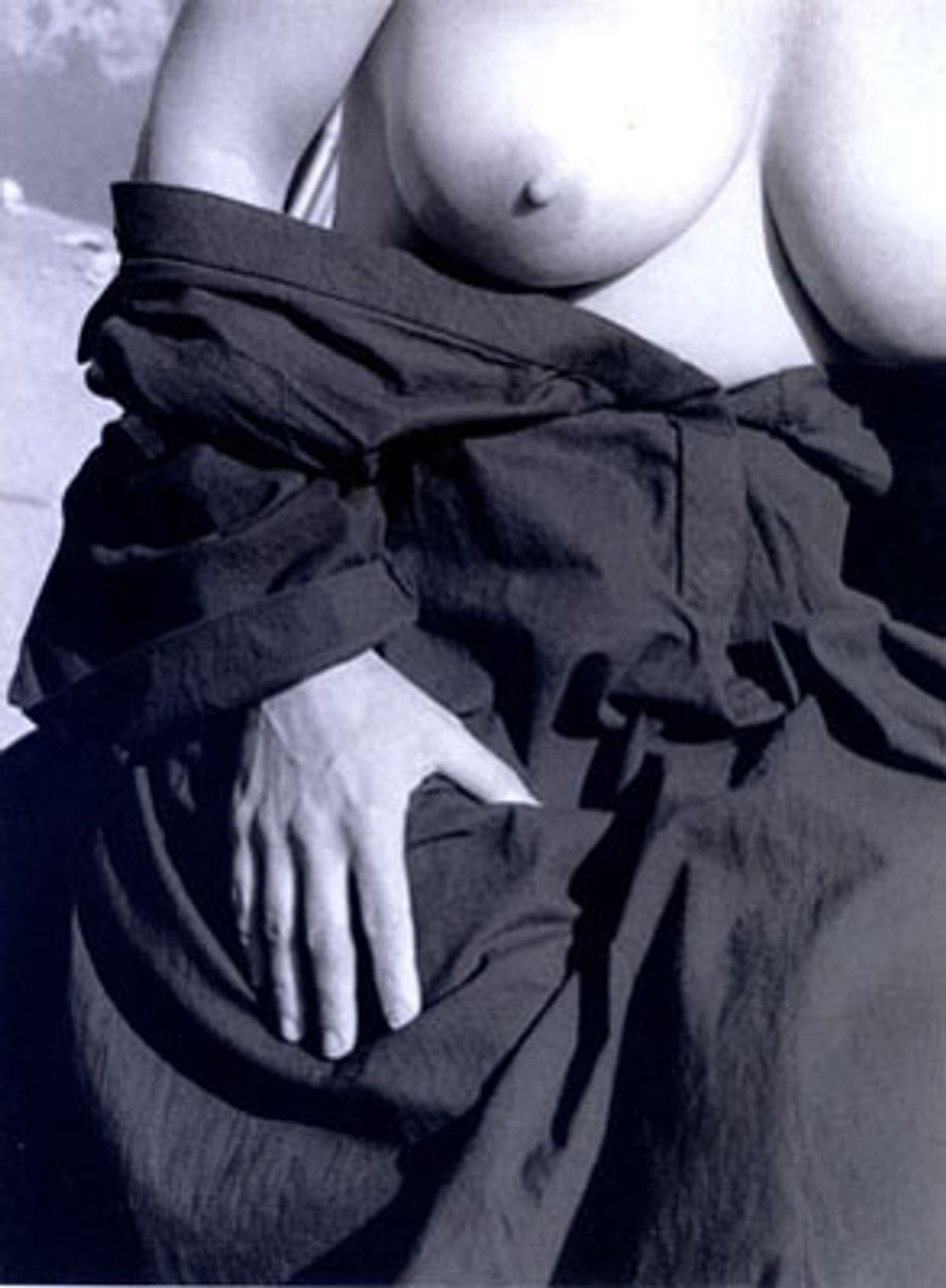 The second most refreshing thing about Manuel Alvarez Bravo is that he's not Ansel Adams. The first is his photographs -- they are dreamy, literally. But that's not news. Bravo, who turned 100 on Feb. 4, has had his work described as dreamlike for much of the last century. Adams was a master landscape photographer, but Bravo, whose contributions to 20th century art are at least as significant as Adams', is a master at chronicling the interior, making photographs that illustrate the subconscious landscape.

This is especially true of "Nudes: The Blue House," a new book of photographs by Bravo, some taken as recently as the '90s, some dating back to the 1930s, with an introduction by Carlos Fuentes. It's a small book of about three dozen images of women -- Bravo likes women -- all nude or partially so and all, it seems, captured while in the middle of some sort of implied narrative.

That's Bravo: He's always telling the story without a plot, the story that never stops -- the tightly constructed tale of whatever is going on at the moment he takes the picture. Like a dream, it makes perfect sense while you're in it. If Cartier-Bresson was champion of the decisive moment, Bravo's pictures have made the indecisive moment iconic.

Though he worked with models (not professional ones) to produce the images in "Nudes: The Blue House," often he has not captured poses so much as anti-poses, the evocative moments between those self-conscious instances when model and photographer conceptually come together. "My work is completely natural and spontaneous," he once told Florida's Sun-Sentinel newspaper. It is also unnatural and carefully planned, albeit instinctively, not consciously.

Our tendency is to look at photographs slowly, to amble through the gallery or page through the book, pausing at each new image, taking it all in, but Bravo's nudes should be flashed on a wall, seen as a flipbook, perceived subliminally, run past furtively, then back again. There's a longing in his images that's better experienced by glancing at them than studying them pensively. "I don't look for anything," Bravo told the New York Times, "I discover things."

One of the things he seems to have discovered over and over during the seven or eight decades of his career is the exhilaration of discovery. But the leap Bravo made that has always given his work a perpetually modern, fresh spirit is that his photos are not about him, they're not even about their subject -- they're about the person who's discovering them.

When I was a college student, I was lucky enough to work as a teaching assistant for film director Alexander Mackendrick ("The Ladykillers," "The Man in the White Suit," "The Sweet Smell of Success"). He used to say that movies take place in a theater located inside the head of each person in the audience. Bravo hangs his pictures in a gallery at that same location.

The classic narrative hook of a quest, or of longing, is one of the themes that runs through "Nudes." The women are often looking at something, as if for the first time, or seeking something or on their way somewhere.

In "Vertical Panoramic Nude," Bravo tips his hat to Duchamp as a nude woman ascends a short staircase to a drape that's just blowing open. In "Between White Walls" another woman looks downward as she approaches the top of a curving staircase. "With Architecture II" gives us a naked woman walking away from us, down the sidewalk. And in one of the book's most elegant images, "The Feet on the Ground," a blond, wearing only low-heeled pumps, turns away to walk up a desert road bordered on one side by a large tangle of swordlike agave plants.

Where are these women headed? They're all going to the same place. They'll be going with you. You'll take them along to have coffee, or to the bar or to have dinner or to meet with friends. Or they'll come to you later, after you fall asleep -- that's when the drape will blow all the way open; that's when the woman will reach the top of the staircase, look at you and speak; that's when the agave plants and the lady in the pumps will resolve whatever it is they're conversing about. And you won't be able to get any of them out of your mind.

Bravo was embraced by surrealism at its beginnings, and embraced it back, but he is a Bravoist more than a surrealist; he's not a trickster. He's also not humorless. The last photo of a woman in the book is "Lucy." She faces us, we see her from the shoulders down, she holds a small tray just below her navel. On the tray are two artificial eyes. Now Bravo's got us. We must look at her nipples, but we can't take our eyes off those eyes, either. The picture is the first thing Fuentes mentions in his introduction: "We experience a shiver, just the kind we feel in the sliced-eye scene in Luis Bunuel's 'Le Chien Andalou.' In this photograph of 'Lucy,' the ambiguities of the gaze become a triple challenge for us. We must wonder: is it our privilege to see 'Lucy' with no eyes other than the nipples of a decapitated body? Or are the eyes on the platter looking at us? But the woman's breasts: don't they have a gaze? Doesn't the body have its own way of seeing and being seen?"

Bravo's career has spanned almost the whole of what's called modern art while not losing relevance. He's nearly always found his subjects near his home in Coyoacan, south of Mexico City. He's shown with Cartier-Bresson, Walker Evans, Tina Modotti, Edward Weston, Paul Strand, Imogene Cunningham and Dorothea Lange and been the subject of one-man shows and the recipient of myriad awards across the globe. In his own small Mexico City gallery, Bravo was showing the work of Frida Kahlo, Diego Rivera, Rufino Tamayo and Jose Clemente Orozco as early as 1927, three years after he bought his first camera. Just three years later he was cameraman on Sergei Eisenstein's film "Que Viva Mexico."

By 1938 he had met the bull goose surrealist Andre Breton, who asked him to take part in a Mexico City exhibition of surrealist art. It was for that show that Bravo created one of his most famous and startling images, "Good Reputation Sleeping," which is included in "Nudes." It's a picture of a woman, wrapped in bandages at the ankles, hips and wrists, lying on a blanket outdoors next to a wall. Four prickly cactus buds lie next to her. Her pubic hair peeks through a gap in the bandages. It's quintessential Bravo, an image of divine tension, carnal, but also religious, casual and ethereal. But then the jolting juxtapositions in dreams are often what wake us up.