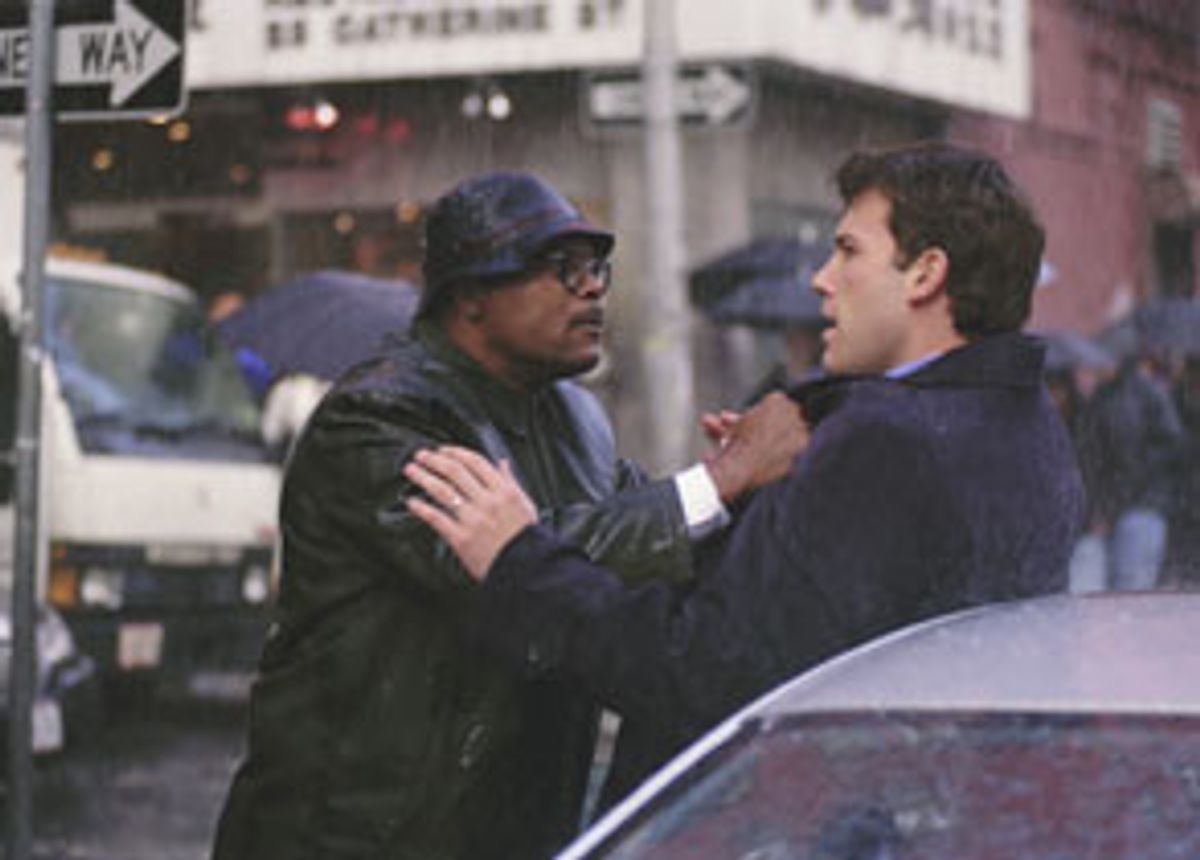 Tit-for-tat vengeance probably first appeared in cave paintings, but to truly grasp the requirements needed to make cruelty entertaining, consider Mad Magazine's simple but brilliant "Spy vs. Spy" comic. Its silent, vicious crows live only for revenge; each tries repeatedly to outdo the other with explosives, helicopters, motorcycles -- whatever they can find. And though the birds clearly served a message (launched in 1961 and drawn by Cuban exile Antonio Prohias, "Spy vs. Spy" was a parody of Cold War espionage), the comic never bludgeoned readers with political or social pronouncements. The crows, one dressed in black, one in white, simply offered panel after panel of suspense, action and a form of creative sadism that consistently kept readers guessing.

In other words, "Spy vs. Spy" had exactly what the predictable and preachy new film "Changing Lanes" lacks: a dedication to surprise, an apolitical stance and an ability to revel in the fertile, fetid muck of revenge. Morality plays clearly have their place in cinema, and films that aim for serious themes ought to be admired for their ambition, but "Changing Lanes" -- despite some solid acting and cinematography -- mistakenly turns what should have been a fast-paced thriller into a cerebral sermon about the slippery slope of corporate law.

When a white Wall Street lawyer named Gavin Banek (Ben Affleck) crashes his Mercedes into a Toyota driven by Doyle Gipson (Samuel L. Jackson), a black working class stiff who's trying to overcome alcoholism and imminent divorce, viewers have a right to expect firecracker action. When the plot -- driven by Banek's attempt to retrieve a file he left at the scene of the accident -- so obviously lends itself to rage, we have a right to be entertained. At the very least, we should be given the chance to voyeuristically watch each character rise to a boil. Their brutish back-and-forth volleys -- whether psychological or physical; whether based on class, race or simple passion -- ought to make us squirm with awe, dark laughter or shame.

Additional violence would have done the trick. "Spy vs. Spy" may be something of a personal archetype, but blood-and-guts movies about revenge, contrary to what most critics will tell you, frequently achieve the kind of moral depth that "Changing Lanes" wants so badly to provide. "Rambo," for example, introduced Gen Xers like myself to the complexities of the Vietnam War and to questions about a when a soldier has the right to rebel. The "Alien" series gave us Ripley, the strongest woman seen on film since Bette Davis and Joan Crawford went head to head in "What Ever Happened to Baby Jane?" Even "Memento," though less bloody than "Rambo" or "Alien," uses violence to reinvent the otherwise tired "revenge has consequences" theme.

And yet, "Changing Lanes" need not have appealed only to our inner Mr. Blonde, Michael Madsen's ear-chopping character in "Reservoir Dogs." The screenwriters -- novelist Michael Tolkin (author of the book and film versions of "The Player") and Chap Taylor, for whom this is a debut -- could have followed the path of classic psychological horrors like "Gaslight" and "Rebecca," which used cold, malevolent villains to send chills down audience's spines. Or, they could have created a mix of physical suffering and psychology, à la "In the Bedroom."

Many potential paths were open, but the point is that "Changing Lanes" needs more oomph -- more rage, more creativity, more power. The movie doesn't quite push far enough to stand out. The script contains several impressive literary flourishes, and Affleck, Jackson and Kim Staunton -- who plays Gipson's estranged wife Valerie with eye-popping intensity -- all turn in solid, believable performances. They alternate between anger and remorse without missing a beat.

But therein lies the movie's main problem; the characters are forced to go back and forth, moving through minor emotional ups and downs, far too often. Whoever was in charge of this picture -- director Roger Michell, making his Hollywood debut after directing "Notting Hill" and a handful of other British films, probably deserves much of the blame -- seems to have rejected the idea of rising tension.

Banek and Gipson are little more than angst-ridden, equivocating good guys gone semi-bad. Though played with skill by two of Hollywood's strongest leading men, neither character veers into tragic territory. Gipson unscrews the lug nuts on one of Banek's wheels, creating a minor accident near the scene of their initial meeting, and Banek uses his powers of persuasion to get Gipson arrested for a few hours. But these actions are the movie's apex of cruelty, and while emphasized with some impressive handheld camerawork (managed by Sal Totino, the cinematographer of Oliver Stone's "Any Given Sunday"), no one gets seriously hurt -- emotionally or physically. Their actions are dangerous but never irreversible, as the happy ending proves.

And even if Gipson and Banek were actually to risk their lives trying to get back at each other, you get the feeling their intensity probably wouldn't last. These guys are like Hamlet, always full of regret. Every vindictive act is followed by an equal and opposite act of virtue. So after Gipson blackmails Banek by faxing him a graffiti-covered page of the missing legal document -- which Banek needs to deliver in court by the end of the day -- he later tries to messenger the file back. After Banek pays a fixer to turn off Gipson's credit history, he tries to turn it back on. And then, when the attempt fails, Banek goes to Gipson's bank and actually co-signs Gipson's loan.

Michell must have hoped that these scenes would make his protagonists sympathetic characters. Actually, he succeeds at this; both men seem more good than bad, and their vacillations may even be realistic. Both are at crossroads in their lives and are obviously having very, very bad days that they'd like to end. Since neither understands how all this has happened -- "Maybe God wanted to put two guys in a paper bag and let 'em rip," Banek speculates at one point -- their uncertain actions seem aligned with their personalities.

Yet in striving to make Banek and Gipson likable, "Changing Lanes" makes them boring. Instead of acting like masters of their own destiny and victims of pride or circumstance, they end up becoming wimpy 21st century men. Call them sinners with sensitivity, the kinds of guys who punch their friends in the gut then apologize when they realize that they've caused some pain. We might like them if we met them at a party. On screen, however, they're flaccid. They belong in a Woody Allen movie, not a version of "Spy vs. Spy" on film.

The people who surround Banek are the movie's only real villains. The partners at his law firm (Sydney Pollack and Richard Jenkins) have already stolen millions from a dead client's estate by the time the movie starts, and Banek's wife (Amanda Peet) puts Leona Helmsley to shame. In a scene that shatters the movie's amiable but problematic sheen of moral complexity, she tells Banek that she knew about his affair with a colleague -- and that he had better do whatever it takes to protect their wealth and position. Pure evil through a lack of character development, she thus becomes a vehicle for the filmmakers' preaching. The message is simple: Status-obsessed rich people are bad, especially trophy wives who rely on lawyers for their livelihood.

I actually believe this statement to be true, but the movie's obvious attempt at persuasion made me cringe. Peet's greed is entirely too earnest; she ends up laughable rather than sinister.

There are other sermons that don't belong in this movie too, including one that Gipson gives about the importance of fatherhood for Tiger Woods. As the only direct acknowledgment of race in the film, the speech stands out. On one hand, there's something pleasant in the way that "Changing Lanes" avoids the race issue, in the way it focuses more on class than skin color. But even this subtlety shows how cautious the movie is. Race, like violence, consequences and visible pain, is an issue that "Changing Lanes" avoids. They're all difficult, dirty aspects of the human experience and because Hollywood prefers caution, the movie swerves around them. Michell will hopefully get another chance to direct a blockbuster; despite the movie's flaws, he pulls stellar performances out of his talented leads. Fans of Jackson and Affleck will probably be pleased. But if you're looking for creative vengeance and chance-taking, read the comics.