With two other dirty girls, Cameron Diaz mucks up one of the flattest, stupidest, unfunniest sex comedies ever. 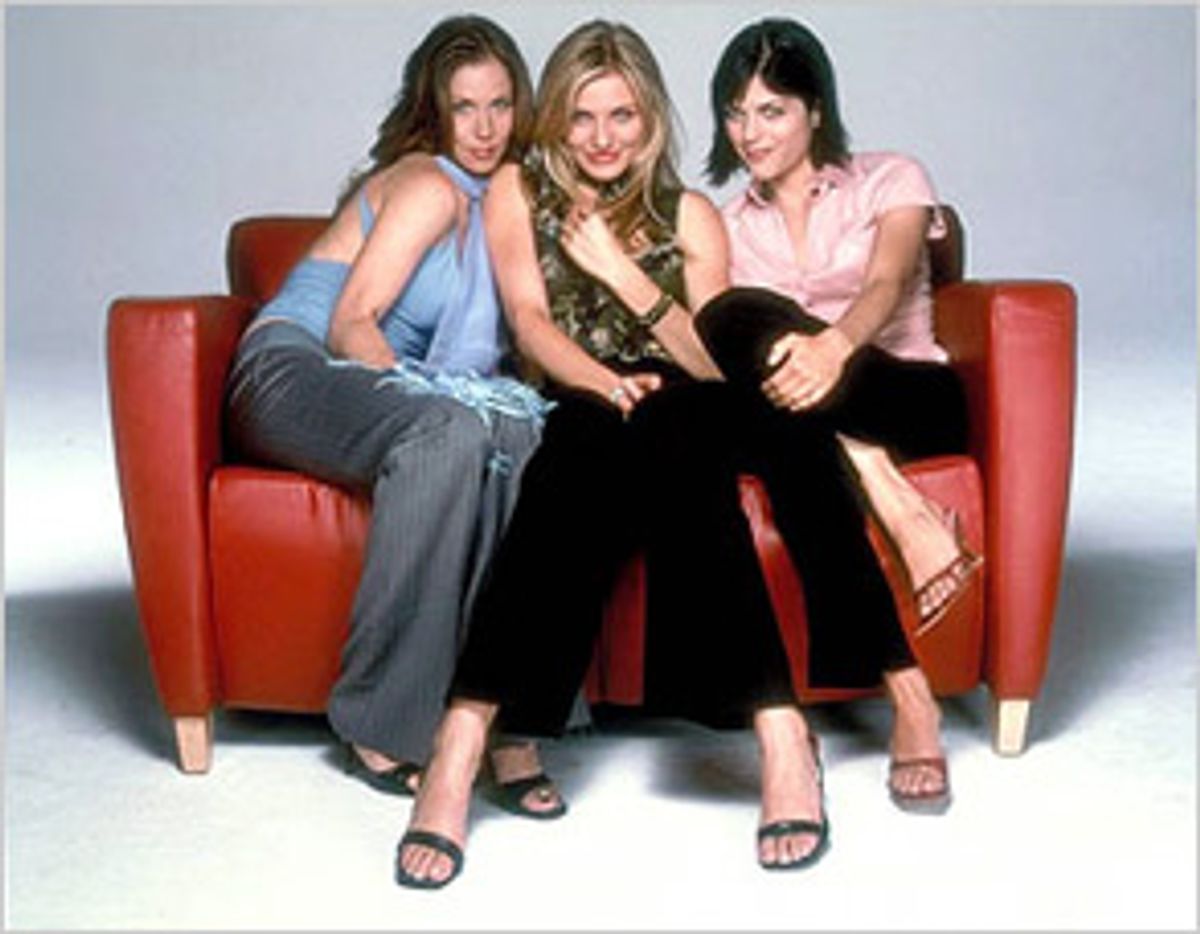 Reviewing "The Sweetest Thing" is like shooting a horse with four broken legs. You want to be cognizant of the poor beast's misery, but you're too aware of your own. This picture is one of the flattest, stupidest, unfunniest sex comedies -- as well as one of the worst all-round pictures -- I've ever seen.

Who can I recommend "The Sweetest Thing" to? To people whose idea of comedy is seeing an old man in a "Who Farted?" T-shirt exclaim "Fuck Grandma!" Or to those who relish the sight of white people attempting to talk black. The alleged director, Roger Kumble, had an amusing debut with "Cruel Intentions," his teen version of "Les Liaisons Dangereuses." That movie had a good, dirty-minded spirit that kept it from falling into adolescent soap. But free to indulge his taste for raunchy humor, he falls into crassness.

I can best describe the tone of "The Sweetest Thing" by telling a story. Earlier this week, I was riding the subway when, at one stop, a group of guys from a technical training school, just out of an exam, piled into the car. At the next stop, a young woman, obviously dressed for a party, entered in sparkly high-heeled platforms, a strapless flouncy black dress and a furry coat. She looked like a cancan dancer on her way to work. The kidding that the guys had been indulging in immediately gave way to utterly unsubtle staring and to the most insulting remarks. "This ain't 42nd Street," one of them said, as if a girl in a party dress just had to be a hooker. My wife, who was riding with me, wasn't so much insulted at these guys' behavior as appalled by their pack-mentality idiocy. "Do any of these wankers think this is the way to get a girl?" she asked.

"The Sweetest Thing" is proof that that sort of behavior isn't any more attractive when it comes from women. Cameron Diaz plays a young, hip San Francisco something or other who shares an apartment with her two girlfriends (Christina Applegate and Selma Blair). The three of them sink their hooks into whatever man-meat crosses their paths like leopards taking down a grazing gazelle. An early club sequence gets laughs out of the guys who try to pick these girls up. But watching Applegate suck her martini olives while making eye contact with a guy, or watching Diaz grab a guy's ass and then call him a dick because he doesn't respond to her overtures, you decide there isn't much difference between oafs and oafesses on the prowl. What there is of a plot involves Applegate's attempts to hook Diaz up with a cute guy (Thomas Jane) she meets at a club by taking a road trip to a Northern California town where he's participating in a wedding.

But there's really no plot to Nancy M. Pimental's script, just setups for the sort of gags presumably meant to make us elbow our neighbor in the ribs while bellowing, "Can you fuckin' believe this?!!" Some of the bits are so outrageous they're almost promising, like a group of girls in a club bathroom feeling up Applegate's breasts because they can't believe her boob job feels so real. And a scene where the talented Selma Blair (who gets about three good minutes -- roughly 12 times more than anyone else in the movie) takes a semen-stained dress to the dry cleaners only to run into her grade-school teacher, her priest, etc.

But gags that extreme require an almost deadpan surrealism to work, a sense that things are going haywire while everyone behaves with absolute calm, and Kumble keeps thrusting his, uh, envelope-pushing in our faces. The measure of the sheer clumsiness of the movie can be taken in a scene where Selma Blair gets her mouth stuck on a date's penis piercing in the middle of a blow job. Because, of course, the movie can't show us her predicament, Kumble gives us a shot of Blair from the nose up, mumbling unintelligibly, with about a yard of dead space in the frame above her head. He's too lazy to even devise a way of stylizing the gag. Though that might have taxed the resources of cinematographer Anthony B. Richmond, who has made one of the most visually ugly movies in recent memory. (Can this really be the same Anthony B. Richmond who shot Nicolas Roeg's "Don't Look Now" and "The Man Who Fell to Earth," or has a pod stepped into his shoes?)

The cast is a dead loss. This is the first time I have actively disliked Cameron Diaz. She's usually a ditzy whiz in comedy, but here she's made to carry the spirit of the whole wretched enterprise, and her performance is appallingly smug. As for Christina Applegate, let's just say that a sequence in which she parodies Julia Roberts in "Pretty Woman" is like watching an Edsel attempt to pass itself off as a Jaguar. She's the front-runner for this year's "Who the Fuck Do You Think You Are Award?" Apart from Blair's few good moments, the only decent performance belongs to Georgia Engel (Georgette from "The Mary Tyler Moore Show"), who gives her pixilated sweetness to the role of a dress-shop owner. Seeing that sincere, clueless face of hers is like sighting an old friend while stranded in the dingiest bus station imaginable.

At one time, a movie like "The Sweetest Thing" would have been produced by a quickie, exploitation filmmaker, released to neighborhood moviehouses and drive-ins to rake in some fast bucks, and be gone in a week. Now it gets released by a major studio (Columbia) with a big production and advertising budget. And I can't think of a better example of the decline of quality control at American majors. Do the people who are running the studios even look at the movies they're releasing? Do they care? It's one thing to walk out of a movie and say "That could have been better." It's another to walk out and ask, "Why does this exist?" Is it so hard for them to make movies -- good or bad -- that look as if they actually gave a shit?