Palestinians fume at what they see as a U.S. tilt toward Israel after another suicide bombing threatens to derail Colin Powell's mission. 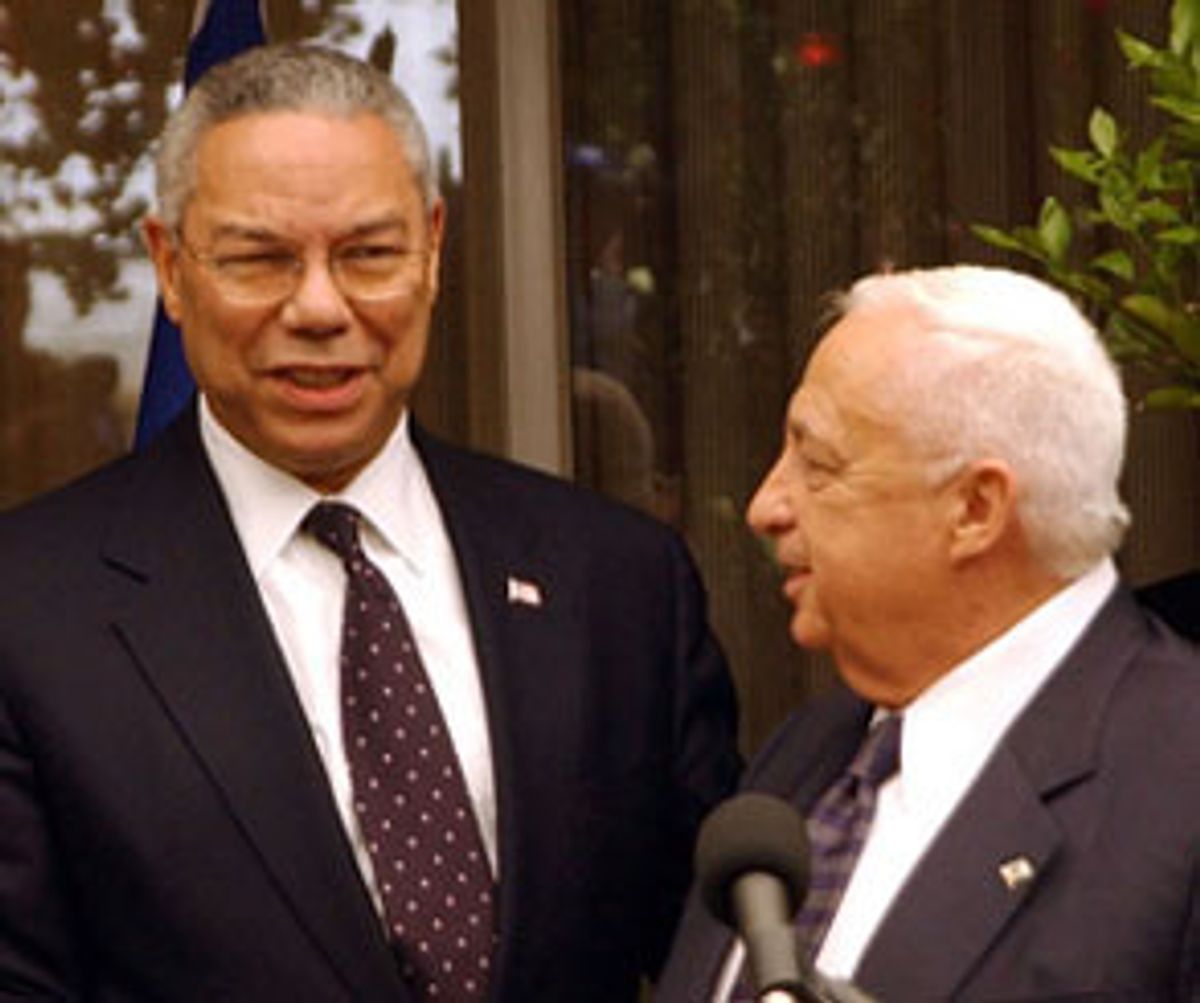 "The Americans always see us as terrorists, even while the Israelis are butchering hundreds of our people in Jenin," says the agitated local commander of the Tanzim militia of Yasser Arafat's Fatah faction, here in this small university town on the edge of Ramallah. He is reluctant to give his name -- "Call me Abu Zeit," he says. The army carried out a sweep for militants in the area just a day ago.

He expects little from the current mediation attempt of U.S. Secretary of State Colin Powell. In the end, he says, the Americans will support the Israelis.

His words take on added meaning when, just a few hours later, Powell postpones a meeting with Arafat that had been planned for Saturday, after a suicide attack in Jerusalem claims the lives of six Israelis. The perpetrator: a young woman, born in Jenin and sent by the Al-Aqsa Martyrs Brigades, part of the same Fatah movement as the Tanzim.

The attack is the latest blow to an already troubled peace mission. Powell received a cool reception in some of the Arab states he visited before arriving in Israel, and on Friday Israeli Prime Minister Ariel Sharon openly defied U.S. policy.

"Israel is conducting a war against the Palestinian infrastructure of terror and hopes to end it as soon as possible," said the ever-combative Sharon at a press conference with Powell. Powell admitted he hadn't even received a time frame for the desired Israeli withdrawal from the Palestinian cities they occupied in their 2-week-old offensive. He had to make do with a pledge that Sharon was "anxious to bring these operations to an end."

Israelis, meanwhile, once again aimed part of their outrage over the suicide attacks at what they see as a meddlesome international community that wants to curb their military operations. Jerusalem's mayor, Ehud Olmert, was himself near the site of the attacks -- a busy downtown market where he goes on Fridays, ahead of the Sabbath, to buy his bread. "I don't want to focus on myself," a shaken Olmert said minutes after the attack. "I stand here talking to you and we just saw the terrible sight of all those people lying in the street."

Olmert, who is a member of Sharon's right-wing Likud Party, was keen to focus on what he saw as the world's hypocrisy. "There is an international effort that disgusts me, to stop our struggle against terrorism." He said that the U.S. should not pressure Israel to withdraw, and that Powell should not meet Arafat at all because it undermines the effectiveness of the Israeli moves. "The Palestinians should understand," said Olmert, "that there is no political horizon at the moment because of the suicide bombings."

Sharon, in an interview with CBS that was to be aired in the U.S. on Friday night, said that peace was not possible with Arafat. "With him [Arafat] we cannot reach any settlement, therefore I believe that it should have been an effort to find somebody else with whom it would be possible," Sharon said, according to a transcript of the interview made available before broadcast. The Israelis claim the Al-Aqsa Martyrs Brigades that carried out the Jerusalem attack are closely linked to Arafat's Fatah movement. They have displayed documents, which they say have been captured in his compound in Ramallah, that are said to show direct links between the Palestinian leader and the attacks.

The head of the Palestinians' Preventive Security force in the Gaza Strip, Mohammed Dahlan, said that suicide attacks were to be expected after the Israeli offensive. "I believe that this operation is in response to what happened in the Jenin refugee camp," said Dahlan.

Jenin has become a myth even before it has been established what happened in the crowded refugee camp. It is no coincidence that the two most recent suicide bombers were said by the Palestinians to have come from Jenin. The Israelis say that the Jerusalem bomber was indeed born there, but that she entered Jerusalem from Hebron, a town that has not been occupied in the offensive.

The Israeli army on Friday admitted that hundreds of people were killed or wounded during the fighting in the Jenin camp. Some Palestinian spokesmen have said that 500 people or more may have died, and that the figure includes many civilians who have been massacred. The army dismisses the rumors of a massacre as "Palestinian lies and propaganda," although some civilians may have died in the fighting. The camp remained a closed military zone on Friday, although the general ban on journalists in the combat areas was lifted late in the evening.

U.N. Secretary General Kofi Annan was so shocked by reports from the West Bank that for the first time he proposed an international force for the region. "The situation is so dangerous and the humanitarian and human rights situation so appalling that I think the proposition that a force should be sent in there ... can no longer be deferred," Annan said in Geneva. He also condemned the suicide attack in Jerusalem.

As Palestinian claims of massacres, mass graves and a coverup proliferated, three Israeli Arab organizations were granted a staying order against the army by Israel's High Court of Justice. The court forbade the army to remove bodies from Jenin ahead of a hearing on Sunday to determine what should happen with them. The organizations demand that they be turned over to the Red Cross and Red Crescent, which can then hand them to the families for burial.

The claims of a massacre are further complicating Powell's mission, especially after the White House demanded that Yasser Arafat condemn the Jerusalem bombing. "The president was very troubled by what happened this morning, and the president expects Yasser Arafat to denounce this morning's attack, to step up and show leadership," White House spokesman Ari Fleischer said.

It seems highly unlikely, though, that Arafat will issue such a condemnation. Palestinians are furious that the international community, and especially the United States, has not done more to reprimand and punish Israel over what they say are hundreds of deaths in fighting and massacres in the cities on the West Bank.

All of which leaves the fate of Powell's mission looking grim. That doesn't seem to faze many Palestinians. In Bir Zeit, Fatah commander Abu Zeit dismisses the whole idea of a meeting between Arafat and Powell. "What good will a meeting with Arafat do us? If Powell really wants to achieve something, he should go back to the United States and try to convince his own government to change its pro-Israeli stance." He reiterates the official position of the Palestinian Authority: "We will only talk about a cease-fire after the Israelis withdraw from our cities and if we are offered a political perspective."

Abu Zeit reluctantly acknowledges, though, that a Powell visit to Arafat might have some positive side effects. The Palestinian leader has been kept isolated in his compound in Ramallah, which has almost completely been occupied by Israeli soldiers. In the run-up to the expected Powell visit, Arafat was this week finally allowed to meet with some of his aides and, on Friday, with Egyptian foreign minister Ahmed Maher. Abu Zeit says that Arafat's popularity has increased even more since the Israelis attacked his headquarters: "If Powell only achieves an Israeli pull-back from Arafat's complex, and if they lift the siege, his mission will be viewed as positive."

The Fatah commander does not believe much else can be accomplished: "This man Sharon only wants war." He cites the incursion into Bir Zeit as an example. "Why did they come in here? There are hardly any militants. They just arrested some people to show a result, broke some doors and that's it, just to intimidate us." He has no other explanation for the raid, he says. The town is nominally under Israeli security control, and his Tanzim militia has orders not to launch attacks from the area, he claims. "But it does not matter to the Israelis -- every Palestinian has now become a target."

Abu Zeit's friend and fellow Fatah member, Maher Zuhair, is the acting head of the once powerful Preventive Security force in Bir Zeit. Zuhair's superior lives in Jerusalem and has hardly been able to get to the town since the start of the intifada, 18 months ago. All the access roads have now been blocked by the army with concrete blocks, earth barriers or trenches. "My orders, the last time I received them, were to maintain peace in this area," says Zuhair. When the Israelis came into Bir Zeit, they blew up the entrance to his office and searched it. He has not been in touch with his boss, Jibril Rajoub, who is Preventive Security head on the West Bank, since the Israelis destroyed Rajoub's headquarters near Ramallah over a week ago.

Even if Powell meets with Arafat and the latter issues a cease-fire call, the security forces may not be able to implement it, says Zuhair. "The whole security structure, the equipment, the information that has been lost, it can't just all be rebuilt overnight." Another big problem could be the motivation of his men. Although Zuhair says that he will carry out orders from Arafat and Rajoub, he acknowledges that many people are angry at what happened during the Israeli offensive, especially in Jenin. "We are members of the security forces, but foremost we are Palestinians and we feel the same as other people feel," he says.

Khalil, the leader of Bir Zeit Student Council, is himself from Jenin. He has phoned his parents and they are fine -- they live in the city itself, which has not been nearly as badly hit as the refugee camp. Khalil is a member of the Islamic Bloc that dominates the campus and is headed by the fundamentalist Hamas movement. In January he replaced the previous chairman of the council, who was arrested by the Israelis during a raid on the campus. When the Israelis came in on Thursday, Khalil went into hiding. "They just arrested some random students, not activists, just so that they can show that they achieved something."

For Khalil, the latest Israeli offensive is just another confirmation of the impossibility of peace. He says that Powell's mission is doomed. Even though Hamas opposed the Oslo peace process, he says, "We tried talks for 10 years and it led us nowhere. The U.S. didn't help us get our rights or even respect during that time. The issue here is not only the recent killings and all the damage that has been done -- it is the occupation and the Israeli presence that pushes us to resist. Powell cannot change that."