In newly released transcripts, Richard Nixon and Art Linkletter struggle to fathom the differences between demon rum and dope. 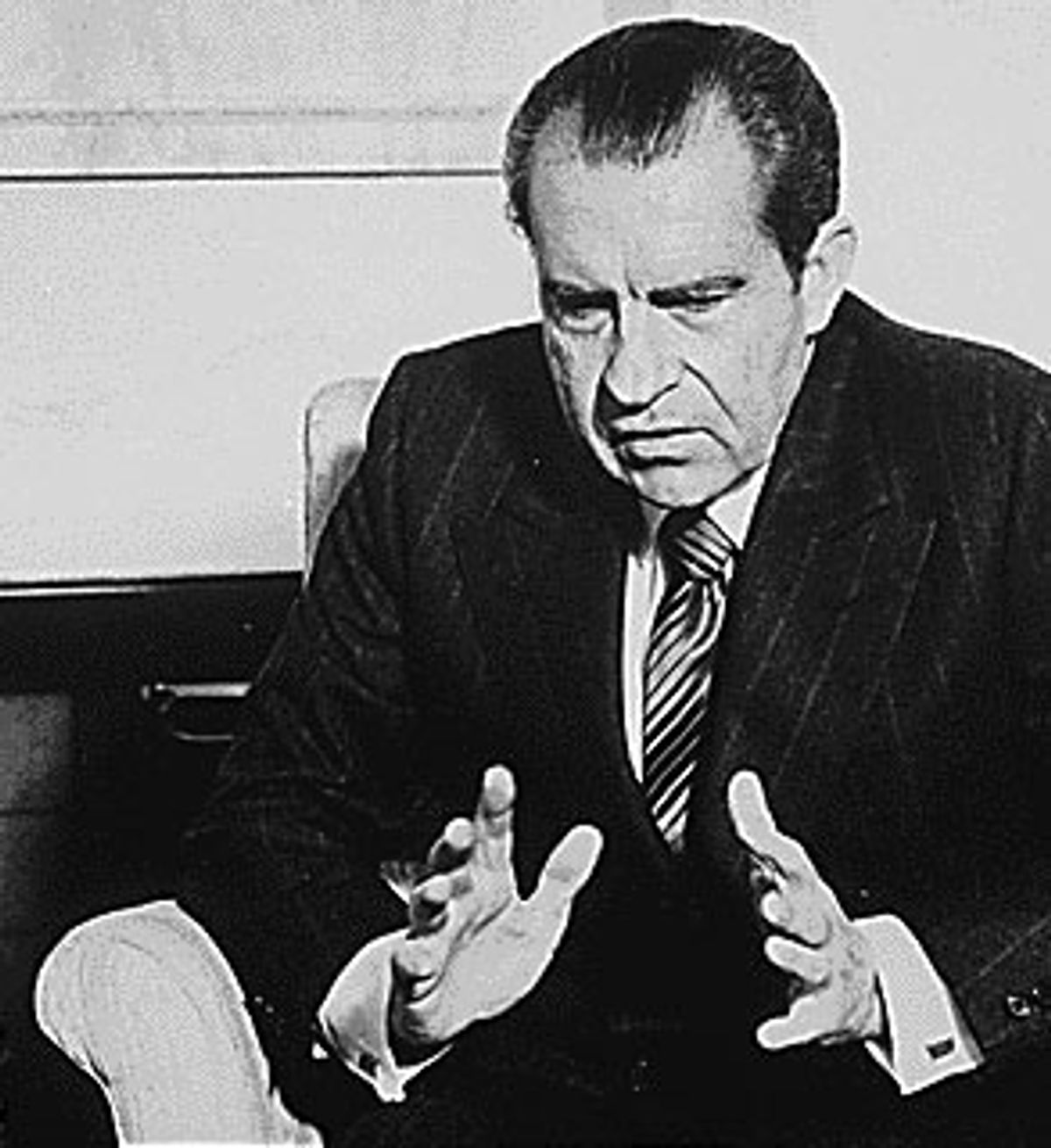 Much has been made of excerpts from the latest Nixon tapes released by the National Archives that illustrate the former president's already well-documented anti-Semitism ("Generally, you can't trust the bastards"), but the Trickster's comments on two of today's hot topics, the war on drugs and sexual misconduct among the Catholic clergy, have largely gone unnoticed. They are reminders of Richard Nixon's timeless appeal, and are as detached from reality now as they were at the time he spoke them.

Drugs, and the people who love them, were frequent topics in the Oval Office around the end of Nixon's first term. Nixon, in fact, can rightfully be called the father of the war on drugs. On June 17, 1971, (coincidentally, a year to the day before the Watergate break-in), Nixon announced an "all-out offensive" on drug abuse, which the president termed "America's Public Enemy No. 1." He requested $155 million from Congress, and created the Special Action Office for Drug Abuse Prevention in the White House.

In the months leading up to the announcement, Nixon solicited opinions from various drug "experts." One of them was daytime talk show host Art Linkletter, whose daughter, famously, had jumped out of a window, supposedly because of the influence of LSD. But like many people in Nixon's inner circle, Linkletter wasn't above bending the truth to fit his own purposes.

When 20-year-old Diane Linkletter leaped to her death from the sixth floor of her West Hollywood, Calif., apartment on Oct. 4, 1969, her father immediately fingered acid as the culprit. "It isn't suicide because she wasn't herself," Linkletter told the media. "It was murder. She was murdered by the people who manufacture and sell LSD." Linkletter claimed that Diane had taken LSD the night before her death, and her panic over its effects led to the fatal plunge.

But when an autopsy showed no trace of LSD in Diane's body, Linkletter's story changed: Diane had taken acid six months before her death and experienced a "flashback," which prompted her to jump out the window. No one in the mainstream media challenged Linkletter's improbable account, and the story of an acid-crazed Diane Linkletter jumping out a window because she thought she could fly became an established urban legend. In 1969, director John Waters released a memorable 15-minute film, "The Diane Linkletter Story," with Divine in the starring role. Timothy Leary took Linkletter to task in a 1979 television appearance, taunting him: "You got in the Nixon White House on the basis of your daughter's death. I think that's ghoulish." (You can see an actual clip of the exchange here.)

So when Linkletter strolled into the Oval Office shortly after noon on May 18, 1971, the stage was set for an historic meeting between a man who blamed drugs to cover up his own shortcomings as a parent and a president who would soon take covering up to new heights. The transcript reads like satire. It's not. Honest.

The first topic was marijuana, a drug that Nixon, of course, had never taken. (What would be the point? He was already paranoid.) Nixon did know a thing or two about alcohol, a drug he increasingly abused throughout his presidency, culminating in the Lush Years of Watergate. With Linkletter, Nixon sought to draw a moral distinction between his drug of choice and "bad" drugs like marijuana:

Art Linkletter: "There's a great difference between alcohol and marijuana."

Richard Nixon: "What is it?"

Linkletter: "The worst that you can have when you're in with other alcoholics is more to drink, so you'll throw up more and get sicker and be drunker."

Nixon: "And that also is a great, great incentive, uh --"

Linkletter: "But when you are with druggers, you can go from marijuana to, say, heroin. Big difference."

According to the Linkletter Vomit Theory, alcohol abusers eventually throw up when they've had too much to drink, thus saving them from further harm, while druggers turn to the needle when pot isn't getting them high enough. Linkletter seems unaware that quite a few people who have had too much to drink don't vomit; they order another drink. And folks who smoke too much pot usually don't turn to heroin; most of them fall asleep on the couch with the TV on.

But no matter. In the first minutes of the meeting, Nixon assumes the role of attentive pupil, eager to learn about the drug underworld from an expert. Linkletter has clearly done just enough research on marijuana to give Nixon the inside dope:

Linkletter: "Now, let me tell you one thing about marijuana you should know, that the word marijuana should never be used until you say, what kind of marijuana."

Linkletter: "There is every grade. Now they say legalize marijuana or it isn't bad. What marijuana isn't bad? The mild stuff we grow in Wisconsin, or the stuff from Morocco? The twigs and the leaves, or the resin? The kind of person who uses it, is he psychologically sound or unsound? All these things make a difference. So you can never say marijuana, you've got to say, marijuana Acapulco, or marijuana from Mexico, or marijuana from Illinois."

Yep, one toke of that marijuana from Illinois and your drugger friend will be begging you not to jump out the window. Nixon shows little interest in getting into a stoner discussion about killer marijuana Acapulco bursting with twigs, leaves, and resin. Instead, he characteristically projects a perceived social ill -- drug abuse -- onto his political opponents.

Nixon: "These, uh, more radical demonstrators that were here the last, oh, two weeks ago. They're all on drugs. Oh yeah, horrible, it's just a -- when I say all, virtually all. And uh, uh, just raising hell, and, uh ..."

Linkletter: "That's right. And of course one of the reasons you can beat them is that so many of them are on drugs. The police are organized and did a great job ..."

Nixon: "Yeah, I got a hold of (Attorney General John) Mitchell on, uh, Saturday night, I said, bust them. And don't hurt anybody, I said don't hurt anybody, I don't want anything like Chicago, but I says, arrest the whole damn lot, if they don't clear the streets. And they arrested them, and the police chief did a hell of a job."

Despite the strong talk, Nixon continues to be nagged by an inner conflict: how can he rationalize condemning marijuana when he freely abuses alcohol? Nixon again steers Linkletter to comparing the two drugs, leading to this exchange:

Linkletter: "Another big difference between marijuana and alcohol is that when people smoke marijuana, they smoke it to get high. In every case, when most people drink, they drink to be sociable. You don't see people --"

Linkletter: "They sit down with a marijuana cigarette to get high --"

Nixon: "A person does not drink to get drunk."

Nixon: "A person drinks to have fun."

Nixon: "Smoke marijuana, er, uh, you want to get a charge of some sort, and float, and this, that and the other thing."

So according to Nixon, people drink alcohol not to get drunk, but to be sociable and have fun. By contrast, druggers smoke marijuana to get a charge and float and this, that and the other thing. Well, that explains it. A final exchange between Nixon and Linkletter takes the big picture view:

Nixon: "And your drug societies, uh, are, are, inevitably come apart. They --"

Nixon: "At least with liquor, I don't lose motivation."

Nixon's final comment is perhaps more revealing than he intended. At least with liquor, I don't lose motivation ... although it sometimes makes me talk aloud to paintings late at night in the White House.

Just five days before Nixon's drug summit with Linkletter, the president had wrestled with another topic ripped from today's headlines: sexual misconduct by the Catholic clergy. Speaking to domestic affairs advisor John Ehrlichman, Nixon viewed the issue through the long lens of history:

Nixon: "You know what happened to the popes? It's all right that, po-po-Popes were laying the nuns, that's been going on for years, centuries, but, when the popes, when the Catholic Church went to hell, in, I don't know, three or four centuries ago, it was homosexual, and it had to be cleaned out."

Three or four centuries ago was, at the time Nixon was speaking, 1571-1671. It's unclear what led Nixon to date the Catholic Church's downfall to this period. Perhaps he was referring to the Thirty Years War (1618-48), an inconclusive battle between Catholics and Protestants that left Germany ruined and much of Europe exhausted. Or maybe Nixon had in mind the Peace of Westphalia in 1648, which upheld the division of Catholic and Protestant states that had been agreed upon at the Peace of Augsburg in 1555.

Or maybe the guy was just drunk.

At any rate, Nixon the strategist thought the Catholic Church was right to root out homosexuality in the clergy, while continuing to look the other way at the popes laying the nuns. For Nixon, the lesson of history is clear: homosexuality, like drug abuse, has no place in a robust culture.

Nixon: "Let's look at the strong societies. The Russians. Goddamn it, they root them out, they don't let them around at all. I don't know what they do with them ... You know what happened to the Greeks. Homosexuality destroyed them. Sure, Aristotle was a homo. We all know that. So was Socrates."

Ehrlichman: "But he never had the influence television had."

Socrates not as influential as television! Say it ain't so!

Regrettably, Nixon dropped the topic of the Catholic clergy, and moved onto more mundane matters of state. It leaves us to wonder, 31 years later, how Nixon might view the sexual abuse scandal currently rocking the church. I'm guessing something like:

Nixon: "The Po-po-Popes laying the nuns is one thing, but the church has to root out the goddamn homos. I'm serious. You've got the priests feeling up the altar boys and this, that and the other thing. Socrates did it, we all know that. But the church has to bust these priests, don't hurt them, but arrest the whole damn lot of them before everything goes to hell.

"Christ, somebody get me a drink."