Breaking into the movie business

Everyone knows Hollywood sucks, but I stole -- and doctored -- Sony's "Sean Connery Golf Project" script to make it better. 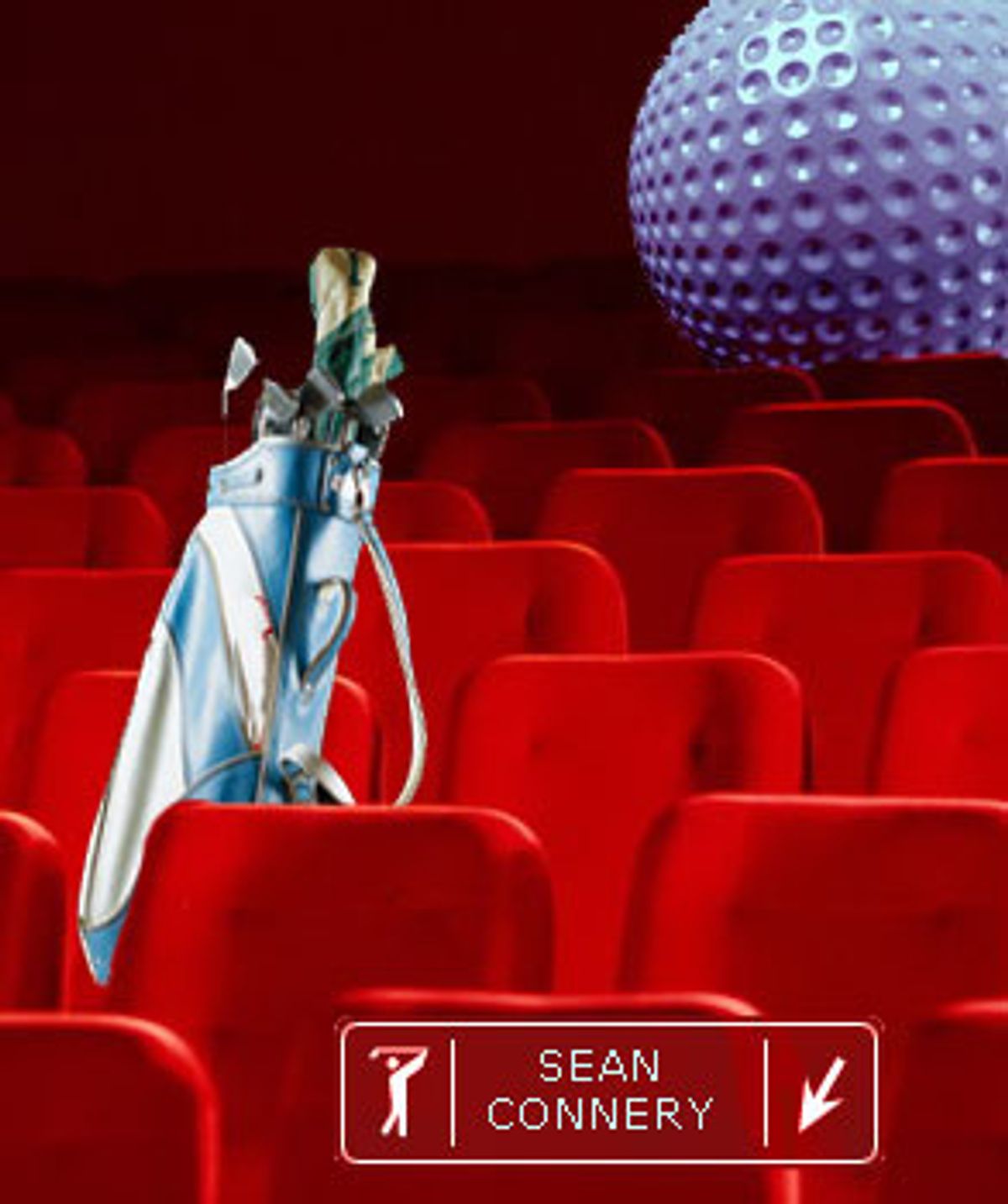 We're trapped. It's 10 p.m. on a weeknight and I'm crouched behind a couch in the pitch-black office of James L. Brooks, executive producer of "The Simpsons." The digital camera in my friend Rhys' sweaty hand can't register a thing. It's too dark. Some dedicated Sony Studios employee is playing a "Simpsons" arcade game that's sitting in the hallway, in what would be our escape route.

Ten minutes pass. When the hell will that person leave? A better question: What the hell are we doing behind James L. Brooks' sofa?

Making our movie, of course, like everyone on the Sony lot. Except, it's not exactly our movie. It's actually Sony's movie, "Sean Connery Golf Project." And they don't know we're working on it.

Let me explain. One month before, my friend Rhys Southan and I decided to make a documentary. I work at a magazine, but I studdied film at the University of Texas and wanted to get back into making movies. And Rhys is just now wrapping up a film degree. Still, we didn't know what our documentary would be about, until one day we came up with an idea on our way to see a test screening at the fortresslike Paramount Studios. Stuck in traffic on Western Avenue in Los Angeles, we were discussing our cinematic plans, which so far had only one major guiding parameter: no budget.

While talking about urban exploration, Rhys let me in on a secret: After watching a screening at Sony Studios in Culver City, this innocent-looking vegan writer/actor/model had ambled off in search of adventure and landed in the studio's story department. Like any good explorer, he left with booty -- seven screenplays. Seven mostly bad screenplays, as I would soon find out. That night, Rhys also spent hours belly-crawling around on the roof of one of Sony's buildings. Why? That's how long it took him to build up the courage to steal a 12-foot-long American flag from its highly visible pole.

Shocked, awed and amused by Rhys' treasure, I suddenly knew what our movie would be. We'd sneak the scripts back into the studio, and we'd film ourselves doing it. Then Rhys, who had already read the scripts, had a better idea for our documentary: First, we'd rewrite the worst script, the script most likely to be made into a Hollywood movie. Of course, we'd have to forgo the film credit and salary a script doctor would normally receive, but by God we'd make the sacrifice. Suddenly, this was much more than a documentary. It was a mission.

Soon we were passionately rewriting an embarrassingly generic script that had the working title "Sean Connery Golf Project." The movie was about a certain Scottish golf hustler who's released from prison and immediately heads back to the green. We had two tasks ahead of us. One was populist. We felt the bit parts deserved the chance to emerge from behind Sean's towering shadow. So we took some of his lines and gave them to the minor characters.

But more important, we needed to liven the thing up. This, the ultimate cookie-cutter script, had about as much courage as a platter of Oreos. So we set to work, confident that as outsiders, we'd be able to flavor the script with the kind of originality that a longtime Hollywood hired gun would zealously guard for his own projects. For one, the original character written for Sean Connery was your average ex-con golf hustler. In our hands, he became an ex-con golf hustler with a passion for yoga. The film's ingénue was transformed from a poor waitress into a bad performance artist with a talent for balancing a stove on her head. She and her fiancé went from a couple who had sex so often they annoyed Sean Connery, to a pair of virgins who pretended to have sex just to annoy Sean Connery. We fulfilled the life of a bitter gangster by showing him the love of a mail-order bride. A storybook wedding -- the film's finale -- became a Vegas affair presided over by a Tiger Woods impersonator who moonlighted as a justice of the peace.

But then came the trickier part of our project: Prowling about the Sony lot to return the now-brilliant script and get footage that would round out our documentary. There were some minor moral questions to be answered first. Did the giant and powerful Sony Corp. deserve protection under my usual credo of "live and let live"? Did the bloated excrement sold to audiences as cinema give us license to monkey-wrench the dream factory? Rhys put it well: "The courage required of us to sneak around a secure, high-stakes business place with an exposed video camera and a bag full of their stuff outweighs any claims that Sony has to their generic scripts." We both agreed that the only truly criminal act would be to consign this prank to the Platonic world. We had to proceed.

We would infiltrate our first target, the Sidney Poitier Building at Sony, after a free test screening of what turned out to be the worst kind of star vehicle: the kind that features an actor from "Friends." While watching this unfunny, unromantic romantic comedy, I writhed in my seat, groaning along with Rhys and eyeing the far-off exit door woefully as the jokes moved from Asian humor (those silly Japanese!) to Texan humor (those crazy honkies!) to some real knee-slappers involving a limp-dicked bull. By the time it was over, I was righteously indignant and ready to turn Sony upside down.

Twenty minutes later, I was doubled up behind a certain executive producer's sofa, wondering why I'd never noticed before how annoying arcade game soundtracks can be. I was also considering what we would do if the "Simpsons" staffers caught us. I had faith that Rhys and I could scam our way out of a variety of situations. But how would we explain why we were hiding behind James L. Brooks' surprisingly ugly sofa? Could we convince them that our cause was noble?

We didn't have to. Everyone eventually abandoned the building, and we followed shortly after.

Rhys and I would return to Sony five times in conjunction with our project. Getting in was a snap, even when there weren't any test screenings. Once we walked in on foot, striding past the guard booth at one of the main entrances. On our long walk among the soundstages, we passed two guards before a third stopped and asked about our business. Our lame excuse -- "We, uh, left our wallet here, sir, after the 'Jeopardy' auditions" -- sufficed. Twice we drove on, even though there was no movie screening to provide a pretext. We just told the guard in the security booth the unvarnished truth, that we had scripts to drop off in the story department.

Yet our work was not without complications. When we finally arrived in the story department with our retailored masterpiece in hand, we found that the studio had committed a massive rewrite, primarily so that Sean Connery could have a love interest! (The fact that he didn't in the first version was one of the script's few strong points.) That was a dark discovery, since it all but destroyed our chances of having our changes incorporated.

We went ahead with our documentary, and after editing, we shipped "Sean Connery Golf Project" -- in homage to the script -- off to the South by Southwest film festival in Austin, Texas. Features like ours generally don't get a lot of industry support, after all. What else were we going to do, ask Sony to distribute it?

The first South by Southwest audiences were enthusiastically in favor of our mission. Daily, fans congratulated us on the street, resulting in a number of beautifully absurd moments: "You're the ones who broke into Sony and stole scripts -- awesome, we loved your movie!" "You guys are truly punk rock." And my personal favorite: "Did you make out in James L. Brooks' office?"

It's possible that someone from Sony will read this. Just in case, we have a plea: Even if you pursue legal action -- thus delivering us the subject of our next documentary -- we both hope more than anything else that you'd use at least one of our proposed changes. After all, we've gone to a lot of trouble. Isn't that how it works in Hollywood -- you scratch my back, I'll scratch yours? And it would really make our year. If the Tiger Woods look-alike is too outré, could Tommy and Theresa at least be virgins?

By day, Sara Rimensnyder is assistant editor at Reason.