The resurfaced manuscript of Bram Stoker's legendary vampire novel reminds us that even a hack can create an immortal tale. 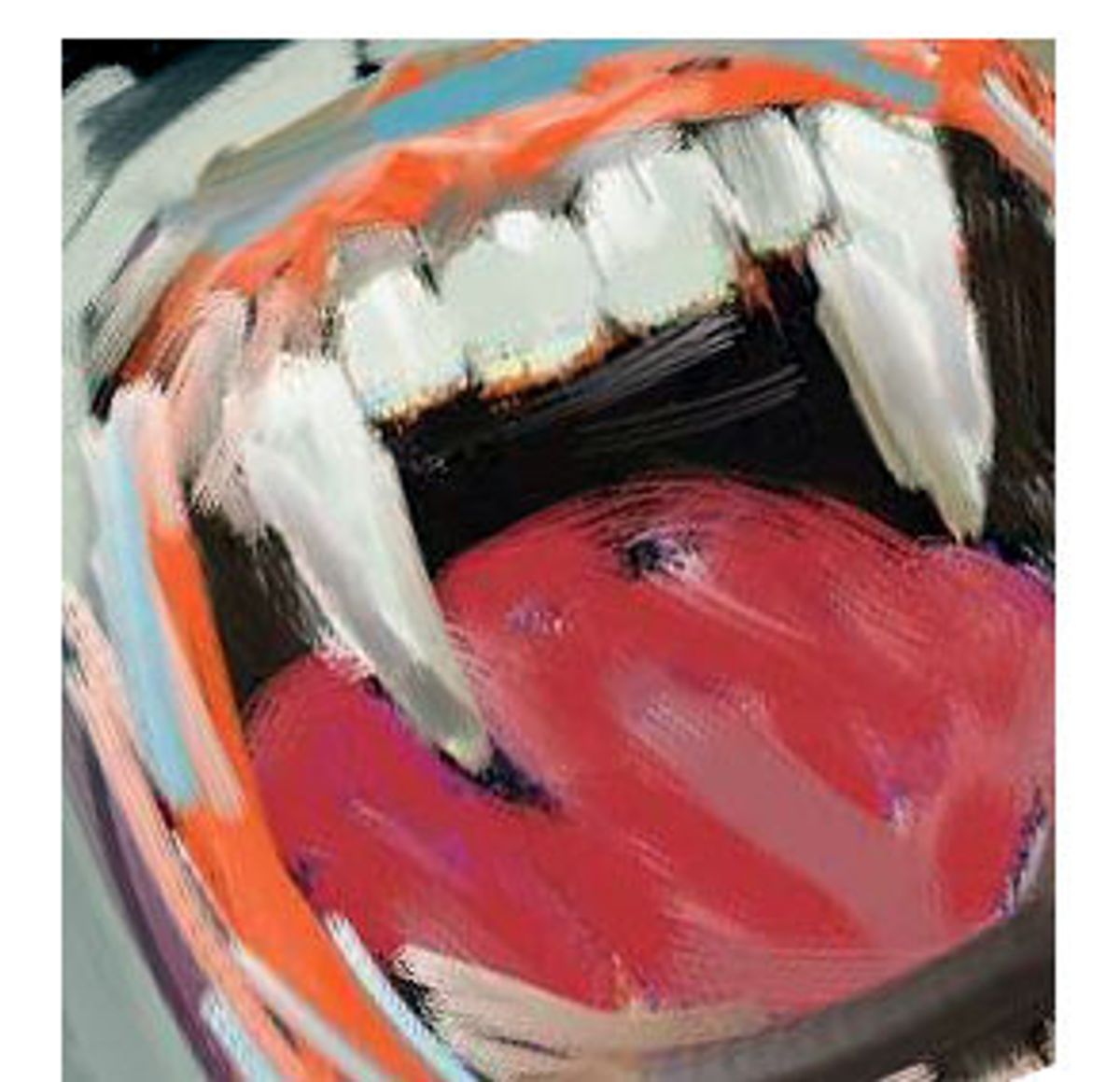 Bram Stoker is famous for writing "Dracula" much as John the Baptist is celebrated for anticipating the coming of Jesus Christ. Each can be said to have held a role crucial, albeit peripheral, to the greater play of history.

There the resemblance ends. While John's revelation was reputedly divine, Stoker's inspiration came, as his son would later explain, "in a nightmarish dream after eating too much dressed crab." Following that gastrointestinally uncomfortable evening, the potboiler writer -- author of such forgettable titles as "The Shoulder of Shasta" and "The Watter's Mou'" -- would spend seven years pouring several millennia of vampire lore into arguably the most familiar fictional character of the 19th century, a figure who in the 20th would become the most frequently filmed as well.

There would never be another hit for the author after that. While Dracula is not Stoker in either appearance or character, Stoker is pretty much "Dracula" to his readers, and little else. And so the recent reemergence into public view of the original 1897 manuscript -- more than 100 years after the book was sent to the printer -- affords an unusual opportunity to meet the long-dead author. For many decades, the manuscript was presumed lost, thrown away by the publisher as you'd expect would happen with the work of a hack. (Is anybody out there actually archiving the Jackie Collins oeuvre?)

Just where the 530-page document was found remains a carefully guarded secret, but it is known to have passed from the hands of an unnamed Dickens scholar to somebody living in California, in whose hold it remained for four years before spending 18 more in the possession of another anonymous collector. Then, a couple of months ago, the elusive manuscript, all four black boxes of it, appeared in Rockefeller Plaza at the door of Christie's New York.

Even the one-time auctioneer of Princess Diana's dresses can be expected to notice the arrival of such an imposing artifact. A glossy color catalog has been prepared, and an estimate of $1 million to $1.5 million has been set on a sale scheduled for April 17. The expected price will likely put the manuscript again in the hands of an anonymous investor, another locked vault. Our acquaintance may be brief, yet at least long enough to ask: How did a man with less literary talent than the average linotype operator create a book that has never been out of print, and continues to surpass every work written in the genre it inspired?

The standard answer is that Stoker had more talent than generally he gave himself the time to use, that he wrote most of his books over a month's holiday from his job as acting manager of London's legendary Lyceum Theatre and that he sent his publisher first drafts he'd scarcely read over for punctuation and grammar. That would explain one reviewer's criticism that the work lacked "constructive art in the higher literary sense" -- except for the fact that the critic, writing for the respected Athenaeum, was referring to "Dracula" itself.

The reviewer was right. "Dracula" is at least as turgid as the procedural manual for law clerks Stoker wrote before turning to the novel. In fact, the only thing remarkable about the care he allegedly took to perfect his book is that his occasional revisions ruin even inadvertent poetry: Initially he wrote of "when the falling sunset threw into strange relief the phantom haunted clouds," which, he said, wound "ceaselessly like ghostly armies." By the time the manuscript reached the typesetter, the clouds had become just "ghost like," with references to their armies routed altogether.

"Dracula" is a great book in spite of itself. The language does not give life to Jonathan Harker or Mina, Lord Godalming or Lucy Westerna. With the exception of Dr. Van Helsing's artificial Dutch accent, they all speak with the same voice, and are only tolerable company because through them we glimpse one of the most full-blooded creations imaginable: the undead Dracula. What the manuscript reveals about its author is that he was that rare writer who appreciated his limitations well enough to turn them to his advantage.

He composed the book as if he were filing a newspaper story, working on a typewriter, cutting up and pasting together his text. The typewriter was a new invention then, seldom used by serious authors, but almost certainly to be found in settings such as the offices of the Dublin Evening Mail, where he'd previously been published as drama critic. The machine allowed Stoker to work quickly and steadily, arranging scenes after the fact and leaving blanks where details could later be inserted. Of those there were many, as is natural in a story so outside the fish-and-chips existence of an ordinary Londoner. Exotic dishes, and foreign drinks like slivovitz were a late addition, but what shows even more starkly the newsroom haste with which Stoker typed presumably the only draft of his sole enduring novel are the gaps he left to fill in later with such common terms as "tainted" and even, to describe some trees, "gloom."

Many have noted Stoker's interest in the technology of his day. "In a brilliant touch," Barbara Belford writes in her recent biography, "Bram Stoker and the Man Who Was Dracula," "he enhances the present tense by featuring new inventions." In fact, the whole novel operates as a machine, built as it is of interlocking accounts by various characters, allegedly transcribed directly from their own diaries and their correspondence with one another. So we read "Dr Seward's Diary (Kept in phonograph)" followed by a "Letter, Quincey P. Morris to Hon. Arthur Holmwood" followed by a "Telegram from Arthur Holmwood to Quincey P. Morris." Stoker's typewriter takes it all down, objective, uninflected, as credible as any news story.

The only human touch, the rearrangement of scenes -- crookedly glued together with connecting text added in ink -- comes after the fact, an attempt to make sense of events apparently recorded in real time, almost automatically. That is Stoker's truest touch of brilliance, to reduce his role to what he could actually manage, typing and filing -- "Dracula's" secretary.

That nasty review of his book in the Athenaeum further chastised Stoker for composing "a mere series of grotesquely incredible events." There, though, the critic went wrong. Unfathomable, Count Dracula is terrifyingly palpable. absolutely believable. All the technology at the characters' command, at the author's disposal, cannot capture the vampire any more than Dracula can be seen in a mirror. Dracula's mystery increases with each failed attempt to set him down on paper. Seeing is not believing; believing is not seeing.

As acting manager of the Lyceum, Stoker expected, even before "Dracula" was published, that the story would be staged. More than anything, he wanted the lead to be played by the legendary actor Henry Irving, his employer at the theater, and the man on whom he reputedly based Dracula's extraordinary persona. Irving, acclaimed for playing Hamlet and Macbeth, Othello and Lear, steadfastly refused the role, which would have put him onstage for but a fraction of the production with fewer lines than just about anybody. Ego aside, he'd known that a master of soliloquy wasn't right for the part. In fact, the most worthy adaptation of "Dracula," overpowering even the original novel, is F.W. Murnau's "Nosferatu" (1922), the vampire's silent film debut.

Dracula's creator wouldn't live to see that. He didn't survive to find what fame his manuscript eventually would bring him. What could be more apt? A man of many, many words, who would write 18 novels by the time he died, Stoker was significant ultimately for what went unsaid.