Will Senate Republicans derail the energy bill over drilling in the Arctic Refuge? 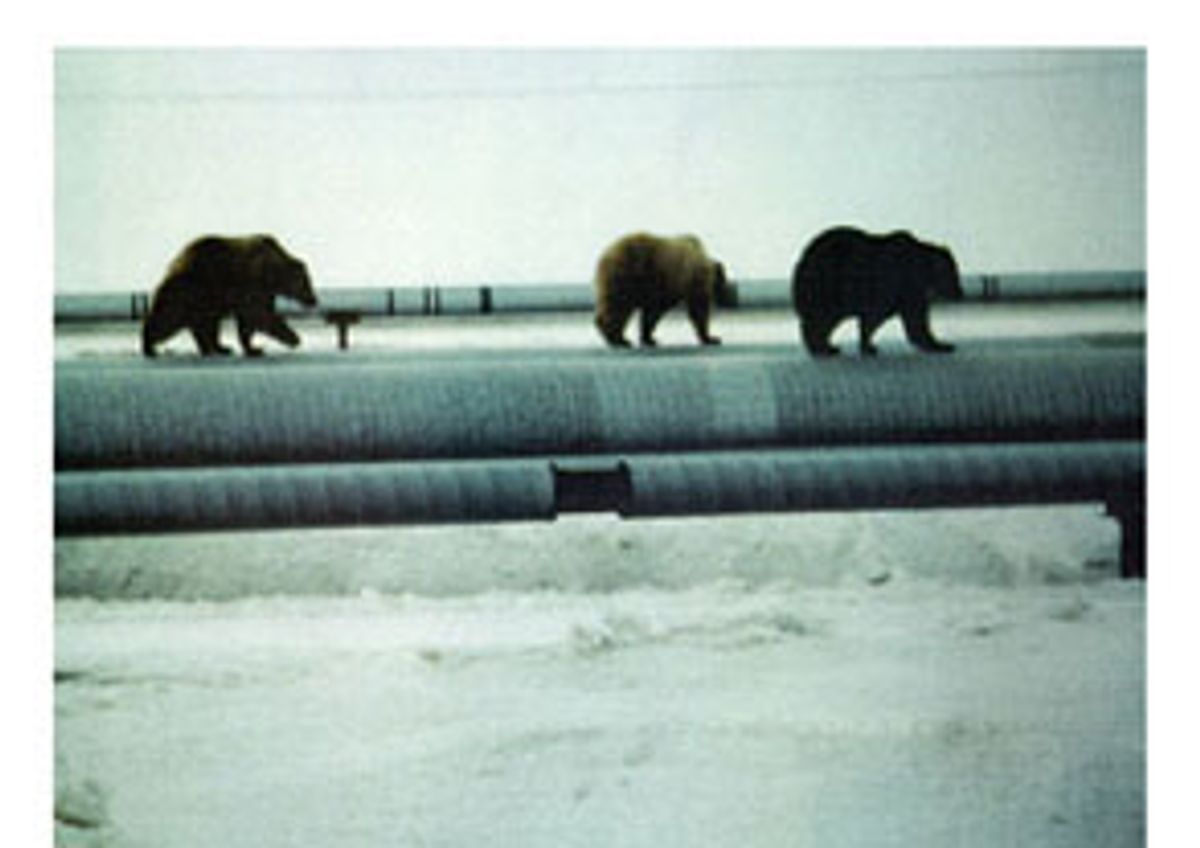 The fight over a comprehensive national energy policy has turned into a game of chicken between Senate Democrats and the White House over oil drilling in the Arctic National Wildlife Refuge in Alaska. That's good news and bad news -- for Democrats.

No amendment approving oil drilling in ANWR stands much of a chance of passing. But it could create a standoff that would kill any energy bill -- which Republicans would surely capitalize on, using it as proof that Majority Leader Tom Daschle, D-S.D., remains the major obstacle to passing legislation on Capitol Hill.

Democrats are poised to vote down an ANWR amendment that's up for a Senate floor vote on Thursday. The question then becomes whether the two Republican senators from Alaska, Frank Murkowski, a candidate for Alaska governor, and Ted Stevens, will effectively tie up the rest of the energy bill by trying to add new ANWR amendments. For this to happen, Stevens and Murkowski would need votes from 40 other senators and, under the Senate rules, the senators could essentially smother the bill with amendments as long as Democrats cannot muster the 60 votes necessary to close off any debate. Supporters of drilling in ANWR are expected to get anywhere from 45 to 49 votes Thursday.

If the Republicans decide to go amendment-crazy, it would likely force Daschle to pull the bill from the Senate floor.

Stevens has already threatened in the past to tie up any energy bill without an ANWR component, but Stevens spokeswoman Melanie Alvord said Wednesday that her boss is still unsure how he will proceed. "He has not made a decision on that," she said.

Alvord said she did not know if the administration had contacted her boss with recommendations on how to proceed. Regardless, the White House must make a decision. Does the administration concede defeat on the ANWR provision, and encourage Republicans to close ranks on an energy bill without Arctic drilling? Or do they call the Democrats' bluff, and force Daschle to pull the bill -- and add fuel to Republicans' characterization of the Daschle Democrats as obstructionists, as they did when Daschle pulled the plug on the stimulus package?

The White House Wednesday refused to say outright whether ANWR was a make-or-break proposition for the energy plan, but spokeswoman Claire Buchan hinted that the president would consider a bill with or without ANWR. "The president is committed to working with Congress to get a comprehensive energy bill passed," she said. "He believes it's critical, and he looks forward to working with the Senate on this issue."

But when asked if the president would discourage Stevens and Murkowski from tying up the bill by introducing more amendments, Buchan said only, "The president believes ANWR is an important component. Exploring for energy in our own country is something that is extremely important to reduce our vulnerability to those who are not our friends who we have to rely on."

At a press conference Thursday, Daschle called on Stevens and Murkowski to not hold the energy bill hostage over ANWR. "I am told that the Alaskan senators are contemplating the introduction of new amendments having to do with the Arctic National Wildlife Refuge," he said. "And that would prove to me without any doubt that they have no desire to finish the bill."

ANWR appears to be the real sticking point in the energy plan. Both the Democratic version in the Senate and the version already approved by the GOP-controlled House call for the revamping of the nation's electricity transmission grid, adding billions in tax incentives for new clean energy technologies, call for construction of a major new natural gas pipeline in Alaska, and increase the regulation of electric utilities. But division over ANWR now threatens to wipe out the entire deal.

Democrats believe part of Stevens' decision may be determined by tomorrow's vote. While there is a general consensus that proponents of drilling will not be able to get the 60 votes needed to break the Democratic filibuster, they say if they get more than 50 votes on Thursday, they may try to reintroduce the measure later in the legislative process. With Sen. Blanche Lincoln's, D-Ark., announcement earlier this week that she will vote against drilling, ANWR opponents now believe they have 51 votes against ANWR. But, they cautioned, those numbers are still in flux.

As Wednesday afternoon came, Stevens appeared to know that he'd been beat, and he did not seem to be taking it all that well. As afternoon faded into night, Alaska's senior senator gave a long, rambling, angry speech condemning his colleagues for once again rejecting drilling in ANWR. He accused the Senate of reneging on a deal the Senate made back in 1980 with the people of Alaska.

Still, Democrats are confident that ANWR will come up short Thursday, and made it clear they will not budge on the issue. Sens. John Kerry, D-Mass., and Joe Lieberman, D-Conn., have vowed to filibuster any energy bill with an ANWR provision in it. "We're attempting," Lieberman said, "to draw a line in the tundra."

The administration has expressed some willingness in the past to approve an energy bill without a provision to drill in the refuge. In March, 2001, in the middle of the California energy crisis, Bush said that if ANWR drilling did not clear the Congress, he would look to Canada and Mexico as possible alternative gas and oil sources. "It doesn't matter to me where the gas comes from, in the long run, just so long as we get gas moving into the country," Bush said.

Of course, that was before Sept. 11, and the latest crisis in the Middle East, both of which have been used by the administration as a sales pitch for drilling in Alaska.

In recent weeks, the White House, along with Republican senators who support drilling, have harped on Saddam Hussein's decision to cut off oil exports to the United States for one month as another reason for opening up ANWR for drilling. The oil in ANWR, they say, is equal to more than 40 years worth of U.S. imports from Iraq.

"One issue that is pending in the United States Senate is the question of whether or not exploration should be allowed in the ANWR region of Alaska," said White House spokesman Ari Fleischer in a press conference last week. "And the president thinks that Saddam Hussein's threat, the promise to cut off oil, is another reason why our nation needs a comprehensive energy plan that is independent of such threats."

But Kerry and Lieberman said this was simply the latest ploy to pitch ANWR drilling. Kerry pointed out that last year, the administration said ANWR "was the cure for the California energy crisis, despite the fact that only 1 percent of electricity in California is oil-based. That represents the extraordinary exaggeration and misplaced priorities of this administration," Kerry charged. The administration has previously also claimed that ANWR drilling could help bring down domestic gas prices, and even act as a stimulus for the nation's economy.

"Next thing you know they'll be saying that drilling in the Arctic refuge is the only way to bring back Oprah's book club," Lieberman quipped.

Indeed, the fight for opening up the Arctic refuge has been heated, and at times, surreal. On the Senate floor Tuesday, Stevens said drilling opponents were "liars. If this were the old days, I'd challenge them to a duel."

An even odder moment came during Murkowski's speech advocating for ANWR drilling Tuesday. He presented senators with a picture of a polar bear walking on an oil pipeline, and said it was proof that the wildlife in the area would thrive, even if the refuge opened for oil production.

"I will show members what the bears think of the pipeline," he said, presenting the photo. "They are going for a walk. Why are they walking on the pipeline? It is easier than walking in the snow. There is a compatibility there because no one is shooting those bears. They blend in with the modest amount of activity."

Environmental groups contend that development in the refuge would disturb the wildlife in the region, including the porcupine caribou herd, polar bear dens and dozens of species of migratory birds.

There seems to be a bit of fundamental disagreement among senators over all things ANWR. For example, Lieberman referred to the refuge as "one of the most beautiful places in America." In his floor speech Tuesday, Stevens referred to it as "hell."

As it became clear last week that ANWR is headed for defeat, sponsors of the bill tried a variety of proposals to pull votes for their side. The most serious effort was an attempt to link ANWR passage to securing pension payments for retired steelworkers. Stevens introduced an amendment that, according to a release put out by his office, "would divert more than $7 billion to a fund created in the Stevens steel amendment over the next 30 years. Under the amendment an additional $900 million would be set aside to shore up the existing coal miners retirement fund over the same time period."

The steelworker proposal, which has traditionally been opposed by Republicans, got the interest of Democratic Sens. Robert Byrd and John Rockefeller, both of West Virginia, a state that produces lots of steel and coal. According to sources, Rockefeller began contacting senators who represent states with steelworkers to see if they might be swayed to change their minds on ANWR in exchange for the amendment providing money for the workers' pension plans.

One of those contacted was ANWR opponent Max Baucus, D-Mont., who is facing a tough reelection challenge this year. Baucus spokesman Michael Siegel said, "I know that he and Senator Rockefeller spoke, but I'm not sure if the steel proposal came up. But Senator Baucus opposes ANWR on principle." When the issue came up on the Senate floor more than 10 years ago, Baucus was one of the leaders of the filibuster to kill the proposal.

As Rockefeller went trolling for votes, he said he wanted a guarantee in writing from both the Republican House leadership and the White House that they would support the pension payment plan if Rockefeller helped deliver the 60 votes needed to secure passage of ANWR. When they balked, Rockefeller accused the Republicans of killing the proposal

Paul Wellstone, D-Minn., who has a large number of steelworkers in his state, blasted the Stevens proposal as a desperate and cynical attempt to "buy votes."

"We don't need to do the bidding for oil companies to take care of retired steelworkers," he said. Wellstone challenged the numbers provided by Stevens' office, saying the actual amount of money that would be generated by his proposal was less than $1 billion, not the $7 billion Stevens claimed. Wellstone said the money needed to secure those pension plans was more than $14 billion, and challenged Republicans to support the steelworkers pension proposal independent of ANWR.