The director of "The Cat's Meow" discusses the truth about "Citizen Kane," the philanderings of Charlie Chaplin and the lies Hollywood tells us about death and dying. 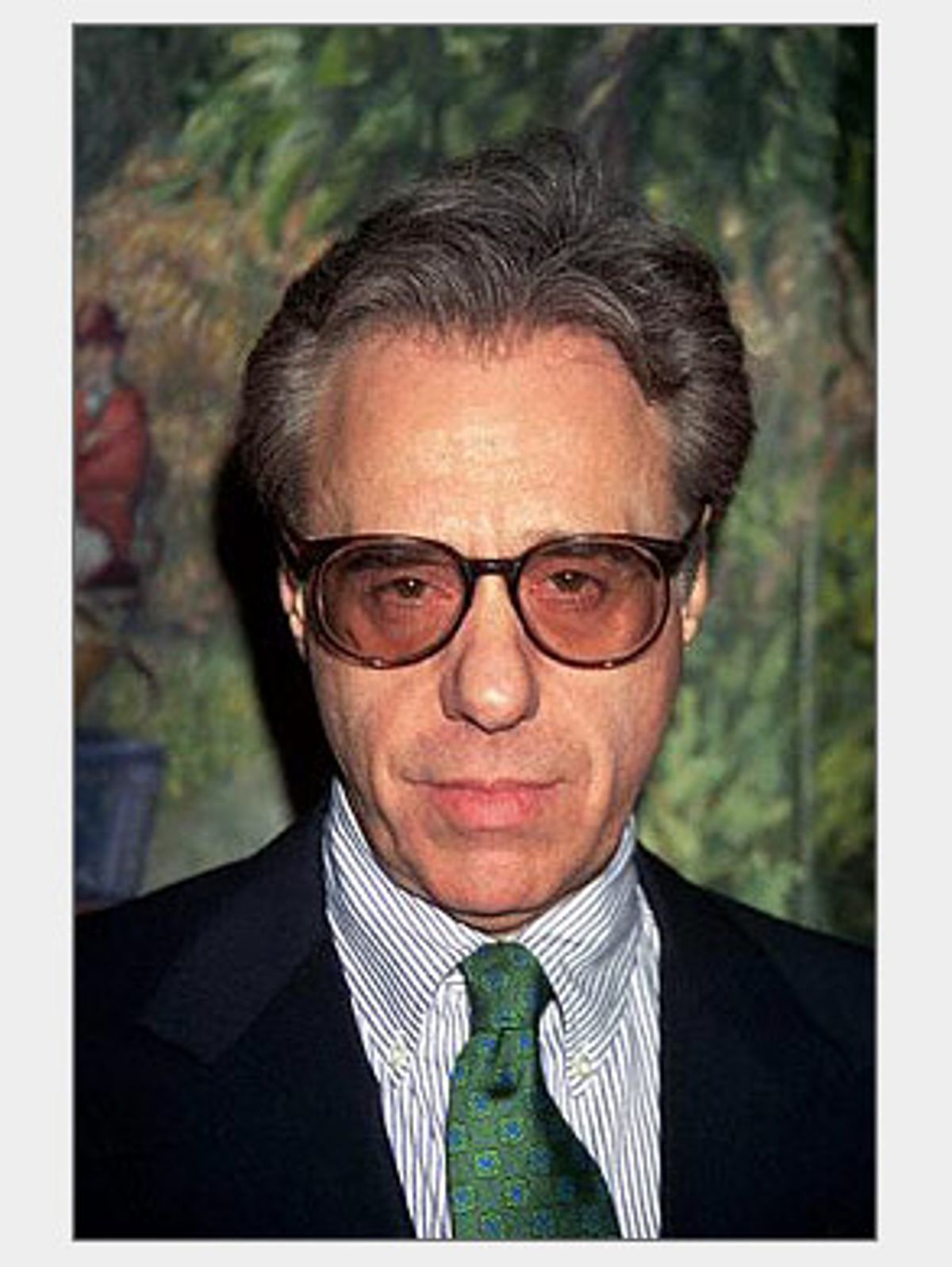 Sneering at Peter Bogdanovich's name has been an art form in some circles for so long that when you meet the man, you expect the insufferable popinjay whom writers still have a field day skewering. This is the man who, according to the Los Angeles Times, sported $323 blue leather clogs in court just prior to filing bankruptcy in 1997. The man who married (and later divorced) his lover Dorothy Stratten's half-sister Louise several years after Stratten was brutally murdered by her jealous husband. The man who stole Truffaut's shtick by going from film scribe to filmmaker, and so on.

Even if some critics hailed early flicks like "The Last Picture Show" and "Paper Moon," by the early '80s most seemed to agree with John Simon's acerbic assessment that Bogdanovich's "entire filmmaking prowess is not much more than a mnemonic feat." Whatever; in person, the 62-year-old is thoroughly charming, and lacks the pretense so often ascribed to him by caricaturists. Can a guy who schleps his own water around with him in a tote bag be all bad?

Moreover, his latest picture, "The Cat's Meow," is an elegant, entertaining little film detailing the famously puzzling 1924 cruise aboard William Randolph Hearst's yacht, the Oneida; just a few days after, one of the passengers died mysteriously. Among those who were onboard: Hearst (Edward Herrmann); his paramour Marion Davies (Kirsten Dunst); her aspiring paramour Charlie Chaplin (Eddie Izzard); and the fly in the ointment, conniving producer Thomas Ince (Cary Elwes). Gossip maven Louella Parsons (Jennifer Tilly) and novelist Elinor Glyn (Joanna Lumley) round out the ship's manifest. And Bogdanovich plays them all like a sly maestro. "Citizen Kane" it ain't, but it's fun to watch. Give the devil his due.

Do you think your old friend Orson Welles would have liked the film?

I hope so. I certainly felt his spirit around when we made it, watching. I don't know about guiding me, but I think he was on our side. He was the one who told me the story in the first place. He told it to me over 30 years ago as an example of how different Hearst was from Charles Foster Kane. The general misunderstanding about "Citizen Kane" is that it was supposed to be about Hearst, but it wasn't.

Charles Foster Kane was a composite character based on three or four press lords including a famous one in Chicago named McCormick, who built the Chicago Opera House for his girlfriend, who was a singer. That whole aspect of Kane had nothing to do with Hearst. And Orson didn't play it like Hearst. Hearst was a kind of pear-shaped fellow who had a high voice and whose hair fell down over his forehead. He looked a lot like Edward Herrmann, but not as handsome.

How did Mr. Welles come to tell you the story?

I was interviewing him for the book we did, "This Is Orson Welles," but we didn't use it in the book because at the time, it seemed a bit incendiary. Interestingly enough, he heard the story from a member of Hearst's inner circle -- Marion Davies' nephew Charles Lederer, the screenwriter. I talked to Charlie Lederer a few years later and he confirmed it. Charlie had known it since he was 12. That's about how old he was when it happened. He confirmed this as fact, that there was this "accident" during the cruise.

How ironic that after Welles told you that story so long ago, you wound up directing this picture.

Yes, it was ironic. The script arrived on my desk 30 years later and neither the writer nor the producer had any idea that I knew anything about it ... I don't know if I would have read it with as much interest if Orson hadn't told me. I often don't read scripts that are sent to me, I have someone read them for me. This one I read on my own. I saw these characters in it and I thought, "My God, it's that story." So I owe it to Orson. If it hadn't been for him, I might not have done it.

Your Hearst seems rather likable in some ways.

Actually, he's pretty ruthless. But he's human. It's the humanity, I think, that makes you understand him. When you understand someone, it's hard to hate them. If you get to know anybody, I suppose, you discover that people are good and bad and all the shades in between. Nobody's all one thing.

Do you think people have changed much since that era, or do you think we're all pretty much still the same?

Human nature stays the same, but maybe certain aspects of it get exacerbated. I think we're in a more cynical era than ever before, and I think that the audience for movies, for example, has been somewhat debased and brutalized by the enormous amount of violence and slaughter on the screen. You sort of say, "Well, 30 people just got killed, so what's next?" Having been, I'm afraid, part of a murder, when Dorothy Stratten was murdered, I can tell you that one murder reverberates for the rest of the life of the people who were close to that person. That's one of the things about this picture, it's about a murder that changes everything. One murder. Not three, not 10 -- one.

So we've been "desensitized," as they say.

Yes, a little. On the other hand, you take any individual out of that audience and have them exposed to the murder of someone they care about, they won't be desensitized. We're only desensitized to the spectacle of it.

Did Ms. Stratten's death change the way you look at violence?

Yes, it did. I never particularly liked violence in movies, but I didn't have the same reaction to it that I do now. I think it's all handled by people who don't know what it's really like. It's just people making movies, and saying, "OK, well, this guy gets killed, and then we go over here and this guy gets killed," and I'm thinking, each death counts.

Is there any solution to that problem, or is it something we just have to accept?

I think it's everybody's personal responsibility. Filmmakers have a responsibility to the audience and to the work, and I wish they felt that responsibility more, especially to what's true in life. The tragic events of September brought knowledge of premeditated murder to an awful lot of people who didn't know about it.

I watched those people on TV afterwards, and it broke my heart. I knew where they were coming from. And I knew they were in for a life of it. They talk about closure and getting past it -- Christ, it doesn't ever happen that way. These poor people on television a week later talking about it, thinking that they're dealing with it. You know, it's a truism for people who've been through this that the fifth year is the worst. It happened to me. For some reason after five years, it's like it's just happened again. It's also something you don't recover from, you learn to live with. You don't get past it, you learn to move on with it as part of your life.

You have to think of it in this context; the murder in "The Cat's Meow" affects everyone there for all their lives. I don't know that Marion would have stayed with Hearst had it not been for the murder. I think she felt guilty that she was kind of the cause of it.

Then it's established that Chaplin and Davies actually were fooling around?

Well, nobody was under the bed. But that gossip item that's referred to in the film linking Chaplin and Davies actually appeared in the Daily News that weekend. I have a copy of it. Chaplin was a notorious philanderer. And Marion evidently had some affairs with other people. We presume it happened.

Of all the characters in the film, who do you identify with?

That's an interesting question. Really, I can identify with all the men. I've been down and out like Ince. I've been obsessed with a woman like Hearst. I've been lookin' to get laid like Chaplin. So, I understand where they're coming from. And I understand, as I said, what a murder does. My sympathy, if you want to ask that, is with Marion, which you can see in the picture to a degree.

It's her tragedy, I think. It's a woman's story -- she's trapped between powerful men. In 1924, women had only been able to vote for the second time. I made a reference to that in the film, because it's fairly shocking to remember that. It was November of 1924 and the election had just happened. Nineteen-twenty was the first year women were allowed to vote. It's about a woman who seems to have everything, but doesn't quite. "I have me," she says. But she's not really right.

If you could go back in time, which decade would you want to go back to?

If I had a time machine? I'd pick the '30s. I'd want to be a filmmaker under contract at Paramount as Lubitsch was head of the studio.

So you might've been one of Mr. Welles' colleagues?

I would've met him, yeah. I looked it up one time and I told Orson, "You know the day you started shooting 'Citizen Kane' I was 1 year old?" And he said, "Aw, shut up!"

You think about him often, don't you?

He was a very dear friend for most of our association, and yes, his spirit ranges over everything. He was quite extraordinary.

You speak of Mr. Welles' spirit. I'm curious, what do you think happens to us after we die?

Kind of a personal question. I don't think the spirit dies. I think the spirit is imperishable, that it remains, and is around or not, depending on different things. I don't know about murderers, though. I don't know where they go. I keep feeling that the murderers who blew up the World Trade Center are doomed to haunt that area for the rest of their lives.