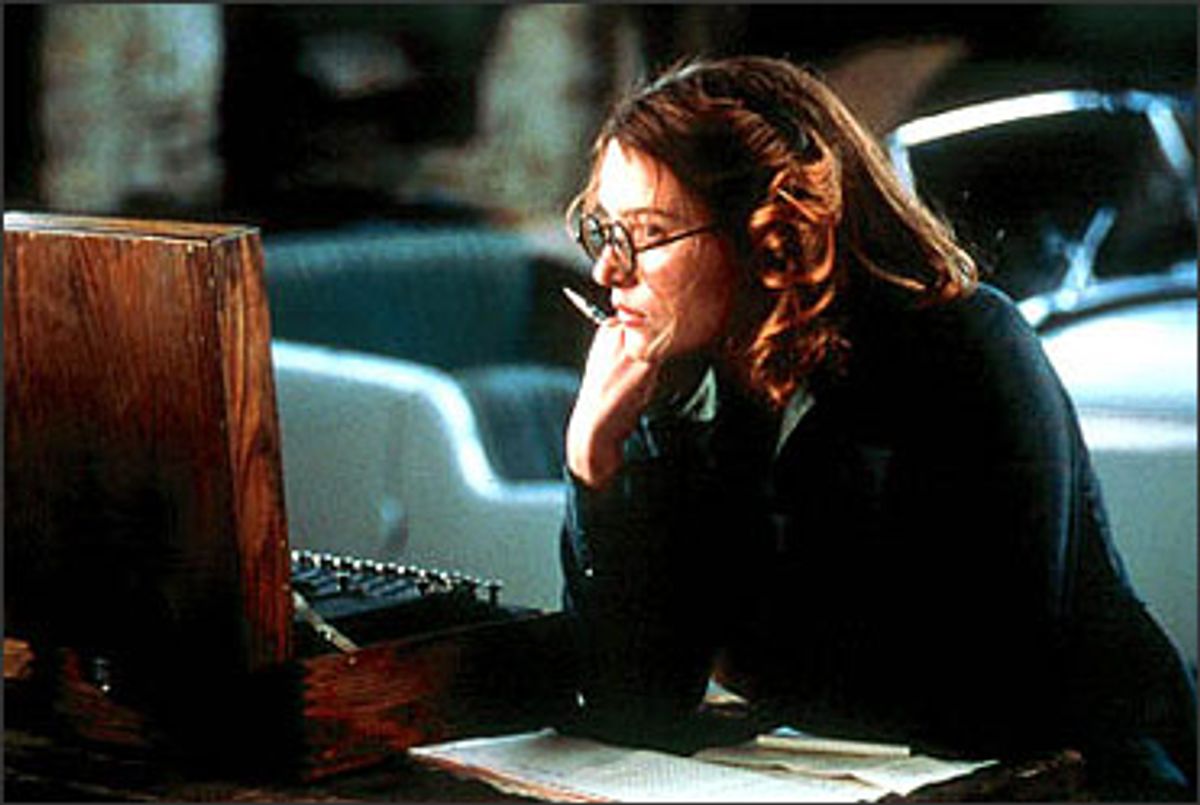 "Enigma," a World War II thriller about British attempts to crack the German code, tells a complicated story in an often confusing manner. Adapting Robert Harris' bestseller, Tom Stoppard doesn't manage the remarkable clarity he brought to his script for Fred Schepisi's film of John le Carré's "The Russia House" (one of the best movie entertainments of the past few decades). Stoppard, with his love for games and especially word games, is the perfect choice to write a script about geniuses and misfits engaged in the most high-stakes word game of all. But the gamesmanship of "Enigma" never takes flight, and the script resorts to having the characters explain plot developments in big blocks of expository prose.

Director Michael Apted does a smooth, competent job, but like almost all his work, "Enigma" lacks excitement and a vivid personality. And in the lead role of Tom Jericho, the top code breaker who's driven himself mad over the stress of his job and his not quite requited love for a woman, the unshaven and haggard Dougray Scott never pulls us into Jericho's precarious mental and emotional state. He often looks as if he's pissed off by the same thing that seems to piss off Russell Crowe during awards shows.

You can see everything that's wrong with "Enigma," though, and still have a pretty good time sitting through it, as I did. The movie isn't compelling. Apted lacks the cunning to give the central plot device -- the attempt to break the Nazi code before German U-boats can attack a convoy of Allied supply ships -- a sense of urgency. But a botched movie that feels as if it were made by human beings who actually give a damn about what they're doing is so far removed from the incompetent dreck that has been stinking up theaters since January that I found myself relaxing into "Enigma." It's a little like turning on the TV in the afternoon and stumbling onto some forgotten piece of British wartime intrigue on AMC, pleasant in a faintly stodgy way.

There are long stretches in this movie where the machinations of the plot eluded me. But compared to most of what's out there, "Enigma" is almost a luxuriant experience. When lovers canoodle by firelight in a cozy country cottage while John Barry's score swoons prettily on the soundtrack (and no one swoons more prettily than John Barry), or when the movie's group of eccentric code breakers -- a motley group of stutterers, Stalinists, aesthetes and Poindexters -- are taking the piss out of their pompous superior, the familiar conventions feel almost reassuring, as if somebody out there still has some vague notion of how to make a commercial movie. Although I'm not sure Stoppard intends it to be a joke, the dialogue often has the feel of British '40s movies, the sort that makes you laugh at the plumminess of it all: "Went off his trolley, didn't he -- about some girl?" or, "There's no sugar, I'm afraid. But it's lapsang, and I always think that sugar rather spoils lapsang, don't you?"

The movie is set in 1943 in Bletchley Park, the British code-breaking compound that was so top secret it wasn't even acknowledged as existing until the mid-'70s. Jericho has returned after a brief breakdown just as it becomes imperative to crack the German Enigma code. One of the things that sent Jericho "off his trolley" was Claire Romilley (Saffron Burrows, gorgeous in her sphinxlike, somnambulant manner), a fellow worker he was involved with. To Claire, Jericho was just one of her many conquests. But Jericho became besotted with her to the point of offering to spill the secrets he was meant to keep if she would stay with him. Back at Bletchley, Jericho finds evidence that suggests Claire may be working for the other side and he teams up with her plain-Jane roommate Hester (Kate Winslet) to find out what she was on to, and hopefully to clear her. Meanwhile, another intelligence agent, Wigram (Jeremy Northam), is keeping close tabs on Jericho and Hester, trying to find out what they know.

"Enigma" takes far too long to tie Claire to the scramble to save the Allied convoy. The code breakers have only four days to do it and you have to wonder what Jericho thinks he's doing when he's devoting his time to the Claire problem. If Scott had managed to make Jericho's obsessive need for Claire stronger, his quest might have taken on the quality of a tragic flaw. As it is, it seems a distraction from the movie's main conflict. And Stoppard has skimped on the developing attraction between Jericho and Hester. I wanted more of them together, especially because of Winslet; there's something ludicrous about putting her in a big pair of round Kurt Weill glasses and asking us to see her as a dumpy, ordinary girl. Winslet has fun with it though, and she creates a young woman powered by her big brain who doesn't give a damn whether that turns off men or not. After a while I began fantasizing that Winslet was another fictional character, say, a grown-up version of Hermione Granger from the Harry Potter books.

And I wanted more than just this script's tossed-off sketches of the code breakers. Code breaking might be a puzzle more suited to books than to movies, but "Enigma" doesn't do all it might with these men. It doesn't give us the thrill of watching their whiz-kid minds at work and the satisfaction that these guys -- many of them unsuited to military service -- take in finding their own way to fight the war. (There is one moment that's so sentimental it seems to have been lifted from some WWII "In Which We Serve" fantasy: a young woman who works in a secret installation asking Jericho if there's any worth in what she and the women she works with are doing. "This is our only war," she explains. There's something so irreducibly decent about the desire to do good behind that question, and the way the actress delivers it, that the sentimentality doesn't keep it from being moving.)

As Wigram, Jeremy Northam seems to have found his niche. Like Hugh Grant, he appears to be one of those British actors who come to life playing a heel. (But he was awfully charming as Ivor Novello in "Gosford Park"; I could have happily listened to him singing those music-hall songs for far longer.) Northam wears his fedora and the overcoat draped around his shoulders so nattily that you want to applaud his style alone. That outer style filters down to his line readings, which are cutting, dry and frequently very funny. I don't know if Robert Harris has any plans to do sequels or spinoffs of his novel, but Northam suggests one of those great stylish sleuths -- the Saint as a British intelligence agent -- and the idea seems a natural.

"Enigma" has none of the thrill of the shock you find in the code-breaking sections of Neal Stephenson's novel "Cryptonomicon," a great fat boy's-book adventure for the cyber age. And it has none of the suspense you can still find in British wartime espionage movies like Carol Reed's "Night Train to Munich" or the enjoyably trifling "Q-Planes" with Laurence Olivier and Ralph Richardson. But World War II thrillers all work from an advantage; the importance of "the fight" is a given. We all have a stake in the outcome. Even with all its botches, "Enigma" offers all the pleasure of a handsome and well-made entertainment, familiar and worn out but with a professionalism that's rather comforting. It's not the great movie yet to be made on the subject, but I'm sure I'm not the only one grateful to the makers of "Enigma" for placing the credit for breaking the German code back it belongs: with the British. After the cultural theft perpetrated two years ago by "U-571," this modest restoration feels like an act of decency.