Share the dull exploits of Billy Crudup, philandering schmuck, in this tedious tale of middle-aged angst. 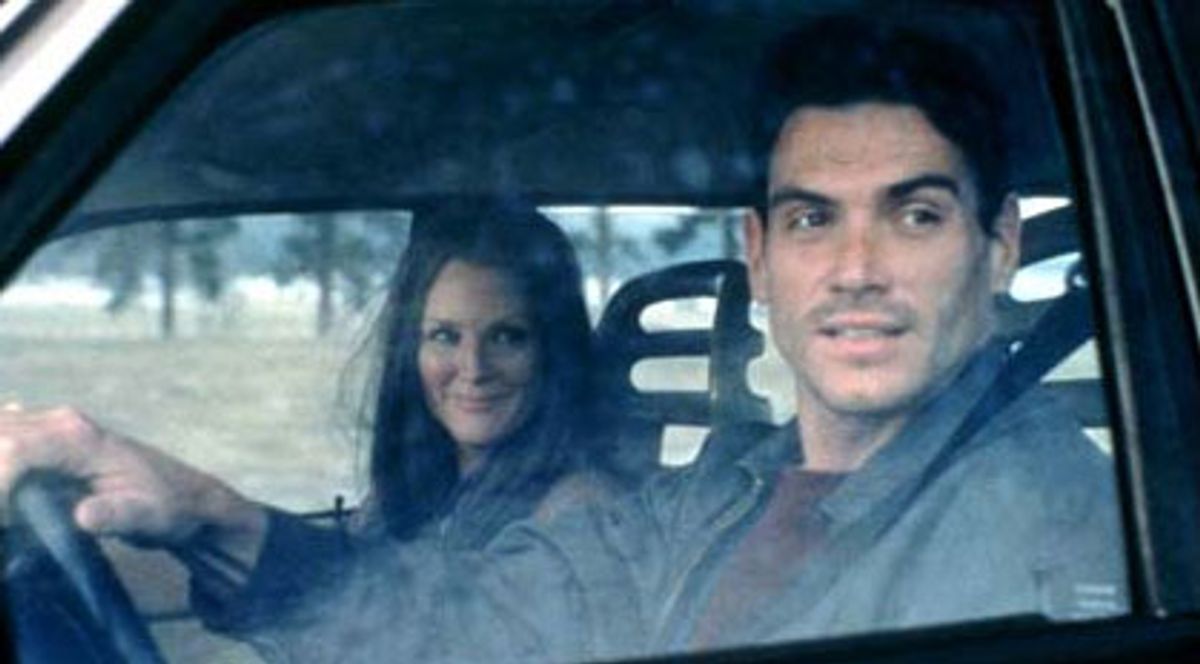 In the production notes for Bart Freundlich's new film, "World Traveler," the protagonist, Cal (Billy Crudup), is described as "a worthy heir to the sort of characters immortalized by such American authors as John Updike [and] John Cheever." Bored yet?

"World Traveler" is a long whine of premature middle-aged angst about a successful New York architect who walks out on his loving wife, his loving 3-year-old son, his successful career, his comfy Manhattan apartment in search of ... something more. Feeling much sympathy yet?

It's hard to remember a movie that has asked us to care, without giving us reason to, about a character who is so thoroughly and relentlessly a prick. It's not out of bounds for a movie to ask us to feel something for a character who feels trapped in his life, and it's not unthinkable for a movie to ask us to invest something in the fate of an unlikable man. But writer-director Freundlich's conception of Cal, and Crudup's performance in the lead role, are so narcissistically self-involved that you can only feel sorry for the poor fools who wander into Cal's orbit.

Along with cracking the Cheever and Updike, Freundlich has obviously spent considerable time studying Bob Rafelson's 1970 film "Five Easy Pieces" -- and taking it much, much too seriously. Everyone who has seen that flick remembers Jack Nicholson's superb performance as the alienated concert pianist who drops out of his cultured cage to live and work among ordinary folk, and everyone remembers the scene where Nicholson tells off the diner waitress. But try watching that movie again and you'll find not so much a character or a story as an extended literary conceit.

The production notes claim that Cal has been influenced all his life by road movies, but since there's not any evidence of that in the movie, not a moment when he refers to one of them, we have to assume that Freundlich is the one who's swallowed the genre whole. "Five Easy Pieces" could be a template for his sensibility. Essentially he's making movies out of notions for spare, dried-out novels. (The title of his debut film, "The Myth of Fingerprints," was as clear a warning as any moviegoer could ask for.) Aside from a few actors' moments in each, nothing in his pictures attains the believable texture of the flow of life.

Cal's odyssey (Memo to reader: Beware any movie where the lead character has what can be described as an odyssey) is the old intellectualized macho dream of hitting the road, drinking hard, working hard and falling into bed with any available woman. Past a certain age, that kind of male dream reeks of desperation. And maybe "World Traveler" might at least have engaged us if Freundlich and Crudup pulled us into that desperation, allowed Cal some gutter joy (the sort Marco Ferreri and Ben Gazzara managed in their Bukowski film "Tales of Ordinary Madness").

The trouble is that "World Traveler" has been conceived as an object lesson about the illusory nature of happiness and freedom. Guess what? Cal is just as miserable boozing and whoring and not shaving in Pennsylvania and Minnesota and Oregon as he was sitting behind his drafting table in Manhattan. And we're stuck watching every miserable, sweaty step of the way. Arrested adolescents can be fun to watch if they've still got some youthful verve and disrespect in them. When all they've got is self-serious teenage alienation and mute unfocused rebellion, they're a drag.

At one point, Cal runs into the father who abandoned him (David Keith, who makes the character's refusal to talk about why he did what he did seem like a point of honor, a way of exempting himself from the movie's portentous, one-hand-clapping dialogue) and asks why he walked out. I slumped in my seat and muttered, "Because you take so goddamn long to get out a sentence."

Crudup was not immediately dazzling in the movies. I watched his performances in pictures like "The Hi-Lo Country," waiting to see what friends of mine who'd seen him on stage had described. I finally got it in his run of performances in "Waking the Dead," "Jesus' Son" and "Almost Famous." Crudup uses his smooth, chiseled good looks to suggest characters who want to hide. When someone calls him on something he has a way of averting his gaze and breaking into a thin-lipped smile while he searches for a way out of a tight spot. Here, that, along with a dazed 50-yard stare, becomes actorly shtick. He hesitates over each line reading for so long that he appears to be doing a montage of Pinter pauses. (Given what Freundlich gives him to say, maybe he should have stuck with the pauses.) In his other movies, even when Crudup didn't come through, he never seemed to be preening. He is here. It's a rigorous, interior performance and, I think, an almost wholly phony one.

And he's matched by Julianne Moore (Freundlich's off-screen partner) whose mad damaged boozer routine is something like the art-house version of Claire Trevor's flamboyant, over-emoting barfly in John Huston's "Key Largo." Moore is one of our best actresses but working with Freundlich she buys right into his conceits and that makes the intellectualized approach she sometimes takes to characters seem fraudulent, as with her tortured artist routine in "The Myth of Fingerprints."

Some of the cast manage to do some good work, like Liane Balaban, the young actress who starred last year in Allan Moyle's too-little-seen charmer "New Waterford Girl." Cleavant Derricks and Mary McCormack are fine and believable as Cal's construction job co-worker and his wife (though, stupidly, Freundlich hasn't given them a scene together). I especially wanted more of McCormack since she's the only one here who sees through Cal and calls him on his baloney. Not surprisingly, she's hustled out of the movie after one scene.

Evidently, judging from "World Traveler" and "The Myth of Fingerprints," Freundlich is concerned with the familial bonds that tie people together and drive them apart. "World Traveler" is supposed to be about how Cal reconciles himself to those bonds, how he finds himself. But neither Crudup nor Freundlich ever convinces us that there's anything in the guy worth finding. Not only is he miserable, he's a world-class shit as well. In the course of the movie he lures a co-worker off the wagon and tries to entice him to cheat on his wife. Then he makes a drunken pass at the wife. He lets down and abandons everyone who relies on him for anything. The height of the movie's narcissism comes in a montage at the end when Cal imagines soaring through the air and seeing everyone he screwed over waving hello to him.

John Cheever had a great line in his novel "Falconer" about how to spot the out-of-town businessman. He's the guy, Cheever wrote, who eats alone in a Polynesian restaurant and orders the New York sirloin. There's some humor in that line to take the edge off the obvious pathos. The trouble with the discontent that Cheever and Updike trade in is that it's both dried-out and a fantasy of the privileged. The grind of work and family and commitment and responsibility has supposedly sucked these men hollow, as it has done with Cal. Mass culture and middle-class life has emasculated them. Even when they act on lust or anger or the simple urge to get drunk and let responsibility slide for a few hours, they've got that aura of weighty neutered misery hanging over them.

If you put "World Traveler" next to a deeply felt, emotionally honest portrait of middle-class discontent like Irvin Kershner's 1970 "Loving," starring George Segal and Eva Marie Saint, the celluloid would shrivel in shame. When Cal decides to face his responsibilities, we're meant to see it as cautiously hopeful, a realization that happiness must come from within. But isn't it something else: The admission that he's a shirker and a phony, and that all his fantasies of a free and easy life on the road were just the only kind of overgrown boys' fantasies permissible to the sort of man who wants to be one of the guys while still longing for the glory days of the New Yorker?