On a June afternoon in 1864, Mathew Brady invented candid portrait photography -- and changed our vision of American masculinity. 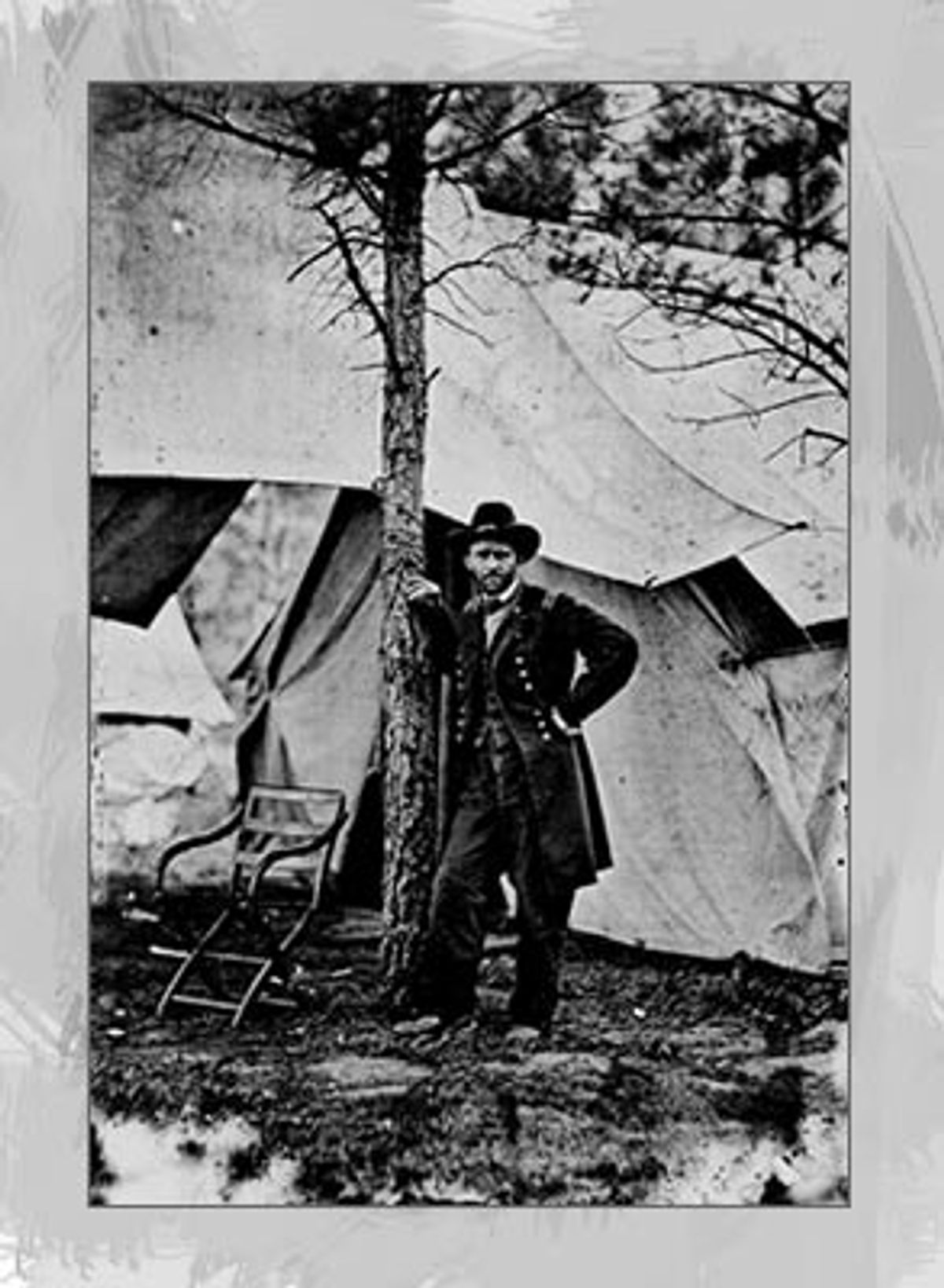 The United States Civil War was not the first war to be photographed. It was, however, the first major conflict to be photographed with absolute thoroughness: From the battle dead to the generals, the gunboats to the chuck wagons, the bloodiest American war was recorded as no conflict had been before.

The bulk of the finest, most resonant images of the Civil War were taken by Mathew Brady and his subordinates. These images included a hasty portrait of a reluctant subject that would prove to be Brady's masterpiece and stand as one of the images essential to reshaping our national identity after the war.

In June of 1864, along with nearly 2,000 images of soldiers, fortifications, battlefields and cannons, Brady took the first important casual photograph, the first permanently recorded awkward image of an important man: The image of Ulysses S. Grant. Brady captured the image at the forward command center in City Point, Va. It is a landmark of psychological portraiture, paparazzidom and the creation of a public image -- all at once.

The hat is slightly askew. The brow is scrunched. There is that frown. There is the awkward placing of Grant's feet, the angle of his hip; the left hand clenched in a fist, the fingers of the right brushing against a tree. It's all wrong for the portrait of an illustrious leader in 1864, but disarmingly natural by today's standards.

In Brady's posing of Grant (or Grant's posing of Grant) lie the antecedents for Henri Cartier-Bresson's "essential moment" portraits (where the subject's personality governs the entire composition), modern celebrity photography, even Alfred Eisenstaedt's proactively myth-making photographs of the Kennedys. Grant's body language is a blueprint of how to look like one of the masses, plucked up by fate, how to look like one upon whose shoulders greatness has been thrust.

Brady did not personally accompany most of his expeditions. Instead he organized and packed off his teams, while he remained behind supervising operations at his Washington studio. One of the expeditions Brady did accompany was the final advance into Virginia by Gen. Grant and the Army of the Potomac.

Brady had photographed Grant before City Point, and he would photograph him many times after. But in previous images, Grant is either in Brady's studio or in the field, painfully straining to fit the image of a general. In the postwar photographs, Grant was a national hero and politician, 30 pounds heavier, and usually seated.

Although the exact date is disputed, the City Point portrait was mentioned in a letter from Grant to his wife dated June 19, 1864. That places the image between the battle of Cold Harbor and the commencement of the grueling Siege of Petersburg. Brady may well have been able to capture such a complex portrait of Grant because the general was simply too careworn for self-consciousness or vanity. On a timeline, wholesale slaughter looms on both sides of this photograph. Grant is paused for a moment in the eye of the storm.

Not only do the details and composition of the City Point portrait provide a shining example of how far the fledgling art form of photography had advanced in a short time -- Brady had only perfected the wet plate colloidal process, which allowed him to make permanent negatives, in the 1850s -- it also constitutes a stunning piece of social propaganda, directed both at the Southern gentry and the Northern military establishment. In a nutshell: Death to the "gallant South," death to the sabers and the spit polish, death to the whole foppish military aesthetic.

The iconography of the photograph is as close as we can get to reading Grant's mind. It's easy to imagine an informal order accompanying the photograph: "We'll have no more glamour in the army. Leave effete uniforms to the British. No more ridiculous plumed and braided getups that make us look like lampshades. And no more trying to make the ladies swoon. None of that. Look at my face. War is not fun or particularly noble. If your hometown wants to memorialize you in bronze when this is all over, that's different. But for the images Mr. Brady and his associates are recording, we need to look like stern, tenacious, quiet Americans."

This is a cranky, get-it-over-with photograph. It doesn't lend itself to cultish adoration, as do so many of the portraits of Grant's Confederate counterpart and chief rival, Robert E. Lee. Lee was photogenic in a haunted, soulful way, but he never quite escaped the mawkish look of an actor about to walk onstage as Hamlet's father.

Grant may be plain, but he is most certainly American. To know Lee only from his portraits with the same sense of familiarity would be impossible. After you study a few images of Lee, his dignity starts to get tedious. Study a few dozen more entries into his visual history, and he no longer seems quite human. Lee is like an ethereal resident existing in the minds of a small number of well-born, proud families adept at self-delusion. He's an icon of the aristocratic South, a champion of a state of perpetual dishonesty. Forget those quaint lines about loyalty to Virginia -- loyalty to Virginia under those circumstances required a frightening suspension of disbelief, and an out-and-out denial of modernity. But yes indeed, Lee gave a good still.

No one had ever before asserted, on the scale Grant dared, that an unkempt provincial could be an American hero. And no one furthered this agenda better than Brady. Even in the ostensibly more forgiving media of painting, Thomas Eakins and John Singer Sargent, the two giants of American portraiture, were still decades behind in making the unglamorous as penetrating and compelling as Brady managed to make Grant's blockish face in a single exposure.

This is not just the man who will implode the hypocritical and backward South, this is also a man who will reform public taste for heroism, characterizing an all-new archetypal American victor. Here, in the City Point portrait, stands the proto-Patton, the inspiration for the successful Teddy Roosevelt design, the Ike that was so liked; a Mailer, a Hemingway, a John Wayne; a realignment with the Daniel Boone and Davy Crockett sensibility.

Down with one myth, up with another. Grant was a troubled man and a poor politician, but thanks to Brady he had a new kind of noble luster: tenacious, middle-class, Midwestern. The City Point portrait initially served as a model for an 1864 cover of Harper's Weekly, but no one could have guessed at the paradigm shift its iconography signaled.

Popular at the time, the image drifted from the public consciousness along with most of Brady's other Civil War photographs. It was not until the 20th century revival of interest in his work that the omnipresence of the City Point portrait became a true perversity. The image is popular because it is in complete accord with the myth of Grant, an image and myth the portrait helped conflate when it was first taken. Like a tautology, the portrait came full circle to claim its own authenticity and truth value.

Brady was, for the first time, glorifying a new kind of man. From City Point on, coarse masculinity and perceptible determination would be essential to the military aesthetic, to the portrait of the American male.

Brady studied photography under Samuel F.B. Morse, who introduced the daguerreotype to America. In 1844, Brady opened his own studio at the first of many addresses on Broadway in New York. He had an eye for formal composition, and quickly excelled at portraiture. His goal from the beginning was to make a fortune photographing famous Americans. He published his first book of lithographed portraits, "Gallery of Illustrious Americans," in 1850. Before his death in 1896, Brady photographed 17 presidents along with George Armstrong Custer, Daniel Webster, Sam Houston and such literary luminaries as Washington Irving, James Fenimore Cooper, Edgar Allan Poe, Walt Whitman and Nathaniel Hawthorne.

In 1858 Brady set up the National Photographic Art Gallery on Pennsylvania Avenue, half a mile from the White House. Brady did land-office business, thanks in part to his introduction of cartes de visite -- photographic calling cards. The enormous profits from this venture were key to the subsequent financing of his massive documentation of the Civil War. His 1860 carte de visite of Abraham Lincoln allowed a significant percentage of the voting public to see, for the first time, whom they were electing, which helped a little-known Illinois lawyer with Marfan syndrome capture the Oval Office.

Brady was a notoriously poor record-keeper, but he is said to have spent close to $100,000 -- a staggering sum at the time -- on equipment, supplies, travel expenses, and other costs involved in documenting the war. After the war, he couldn't find the market he thought would exist for his photographs. The public wanted to forget and move on, and within a few years, Brady was financially ruined. In 1872 he closed his gallery and filed for bankruptcy.

In 1874 the bulk of his negatives were offered at public auction. The high bidder, the U.S. War Department, paid Brady $2,800 for the lot. The next year Congress, in a gesture to acknowledge the importance of Brady's work, voted to pay him $25,000 for the title to his negatives and prints. Sadly, the War Department allowed the negatives to deteriorate, and by 1897 only about 600 remained out of approximately 3,500, not counting some 2,000 negatives already dispersed to private collections.

America was still refining its iconography, still searching for its "look," at the outbreak of the Civil War. The coincidental birth of photojournalism helped not only to make the human cost of 19th century warfare palpable and gut-wrenching, it also provided a quick reference guide for the "American" qualities to be showcased during the nation's reemergence.

Brady and others provided a pivotal visual component to the documentation of the carnage and personalities on both sides of the conflict, reinforcing that there was more than the abstract notion of a union to bind this vast and diverse nation together. There was photographic evidence of overriding American qualities to be found across the continent, from Boston to St. Louis to Charleston. But no single image would quite have the impact of the one that emerged on that pleasant June afternoon in City Point.

Jeff Galipeaux is a writer in Aptos, Calif.