Huge corporation, can you spare a dime?

U.S. corporations swarm to tax-free Delaware like flies to honey. But with a huge budget deficit looming, the state's chief justice is suggesting big business lend a hand. 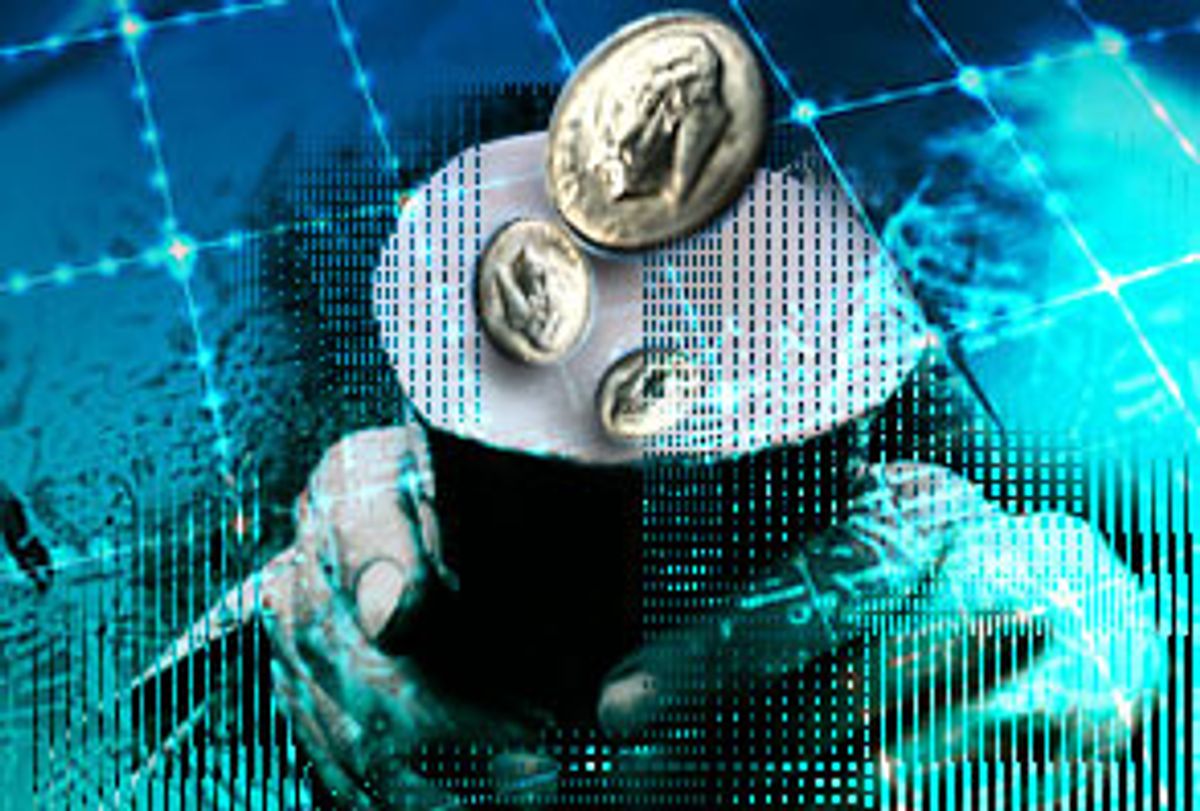 Times are hard in Delaware. The state is suffering from a budget crisis so severe that the court system is postponing murder trials. The governor and the Legislature are claiming everyone will have to tighten their belts, so in January the chief justice convened an emergency commission to come up with alternative funding for the courts. One of his suggestions: corporate donations.

The idea of partially privatizing the court system has come under some fire, but Delaware would actually be a perfect state to experiment with corporate subsidization of judge and jury. Delaware already bends over backward to make itself the most welcoming home for corporations of any state in the United States. More than half the Fortune 500 are technically incorporated in Delaware, including such far-flung companies as Amazon, Dow Chemical, Yahoo and Hewlett-Packard. (Salon is also incorporated in Delaware.) The Chancery Court, the division of the court system that handles corporate cases, is even a profit generator for Delaware.

The Chancery Court was rated No. 1 in all categories last year by the U.S. Chamber of Commerce, which based its decision on the court's handling of such issues as class action suits, punitive damage awarded and timeliness of decisions on summary judgments and motions to dismiss. These are all categories that are dear to the heart of corporate interests, as they reduce the power of shareholders, consumers and those claiming injury by corporate behavior to seek legal redress.

As Delawarecorp LLC, a law firm in Delaware specializing in corporate law, puts it in promotional literature targeted at companies looking to incorporate, "No one likes to be sued, but if you are, Delaware is the place to be."

Given Delaware's notorious friendliness to all things corporate, the state's budgetary woes bring with them no small load of irony. Ever since the 1950s, Delaware has attracted the Fortune 500 horde by marketing itself as a tax-free paradise for corporations anxious to dodge state taxes on their profits. Today, Delaware serves as a kind of domestic Bermuda or Cayman Islands.

In the wake of the Enron debacle, Washington politicians have been getting all worked up about American corporations that avoid paying millions of dollars in federal taxes by "moving" to Bermuda or the Caymans. But domestically, states such as Michigan, Nevada and especially Delaware have long been serving as domestic tax havens either by forgoing corporate taxes altogether or, in Delaware's case, by setting up schemes that encourage out-of-state companies to set up subsidiaries in-state to which they can shift their profits legally.

So now Delaware can't pay its bills. It's unlikely that the rest of the country is going to shed any tears, after years of watching revenue that should be paying for social services disappear into thin air. If Delaware really wants to solve its problem, maybe it's time for it to rethink its tax policy.

The rest of the U.S. pays a hefty price for the tax avoidance schemes pioneered by Delaware, perhaps as much as $15 billion per year, according to Dan Bucks, executive director of the Multistate Tax Commission, an organization with 45 states as members that seeks to help states collect their fair share of revenues. The size of those uncollected revenues, he says, has been rising dramatically.

"The effective tax rate, as opposed to the statutory tax rate for corporate taxes paid to the states, has fallen from about 9.25 percent of profits in the mid-'80s to 5 percent today," says Bucks. "Most of that decline has been because of aggressive tax planning by corporate finance offices and their accounting firms."

Getting hard numbers is impossible, he says, because state tax payments are confidential. Companies have to report their federal tax payments in their filings with the Securities and Exchange Commission, but state taxes are listed in those filings as a lump sum, not broken down state by state. The only time hard numbers come out is when there is a lawsuit.

According to just three such lawsuits, Toys "R" Us, Kmart and the Limited collectively saved $400 million in state tax payments between 1986 and 1989 by shifting their profits to states where they would not be taxed. Toys "R" Us alone similarly saved $1.25 billion between 1991 and 1995.

In Delaware, the procedure is simple. For a cost of just $50 a year ($30 in the form of a franchise tax and $20 in the form of a reporting fee) a company sets up a subsidiary, called a "passive investment company" or PIC. Then it transfers all its patents, copyrights and trademarks to the PIC and "pays" itself for the use of those rights by the rest of the corporation.

It's a legal fiction, but those revenues, which in some cases add up to as much as a billion dollars a year, are deducted from the profits of the parent company and are tax-exempt in Delaware. With the price for those rights set high enough (and hey, who's complaining?), poof! All taxable profits in the real home state of the corporation have vanished.

Likewise, if you're wondering why your bank (if it's like most bank holding companies) is headquartered in Delaware, that's another little tax avoidance scheme. Banks in other states can "sell" their loan portfolios to holding companies or subsidiaries in Delaware where the interest earned is not taxed.

What does Delaware get out of these deals? No tax revenue, to be sure, but, says Mike Mazaroff of the Center for Budget and Policy Priorities in Washington, "It creates a lot of business for Delaware lawyers and bankers."

And Chancery Court revenues aside, it doesn't seem to go very far in helping pay the state's bills. Despite all the corporate logos floating around the state, Delaware, the nation's premier domestic tax haven, is currently facing a whopping $52 million deficit. Hence the courts' dilemma.

There is an easy solution to this national tax scam, which is gutting state budgets just at a time when the recession has caused other tax revenues to sag. The Multistate Tax Commission is recommending a solution called "combined reporting." Combined reporting, simply stated, is a method some states use to allocate profits of a corporation to the state based upon three factors: payroll, property and sales. If, for example, a company has 10 percent of its payroll in a state, 5 percent of its property and 15 percent of its sales, then under combined reporting methodology, an average of 10 percent of total corporate profits would be allocated -- and taxed -- by that state.

A handful of states, including California, Oregon, Alaska, Maine and Utah, have all adopted combined reporting. Not using it -- and thus losing enormous amounts of tax revenue to corporate profit-shifting -- are such states as New York and Massachusetts.

Only some 15 states use the combined reporting approach. Asked why the number was so low, Mazaroff says, "It is an intensely political and politicized issue. The last governor to try to switch to the method was Wisconsin Gov. Tommy Thompson [now Bush's secretary of Health and Welfare]. He was a Republican, and he got attacked so badly by the corporations that he backed down."

Corporate campaign financing abuses have received wide attention at the federal level, but some observers say that state politics is generally worse. State legislators are easily swayed by relatively small donations, and corporate largesse at the state level is legendary. The National Association of State Legislators' annual gathering is entirely funded by corporate donations, and many large companies host lavish hospitality suites to wine and dine legislators. Moreover, during the past 20 years, an increasing number of state legislatures have shifted from Democratic to Republican control, making them even less interested ideologically in doing anything to raise taxes on businesses.

Legislators are fearful. There's always the threat that, if a state enacts combined reporting, companies may migrate away from them to tax-friendlier venues, taking with them thousands of jobs.

"Companies tell the legislators that if they go to combined reporting, they will leave the state," says Mazaroff.

It's a tussle that most states end up losing, but as long as they are willing to buckle under such threats from large corporate interests, the profit-shifting shell game will continue, putting pressure on budgets for schools, roads, police and environmental protection.

Delaware knows what that pressure is like -- a $52 million deficit is going to hammer the state's social services. But there's an easy solution to Delaware's problem also. All Delaware needs to do is start imposing a tax on PICs. After all, how different would such a plan be, really, from asking for corporate contributions to defray court costs?