Yes, these cute French lesbians have adorable breasts, but haven't we seen these C-cups before? 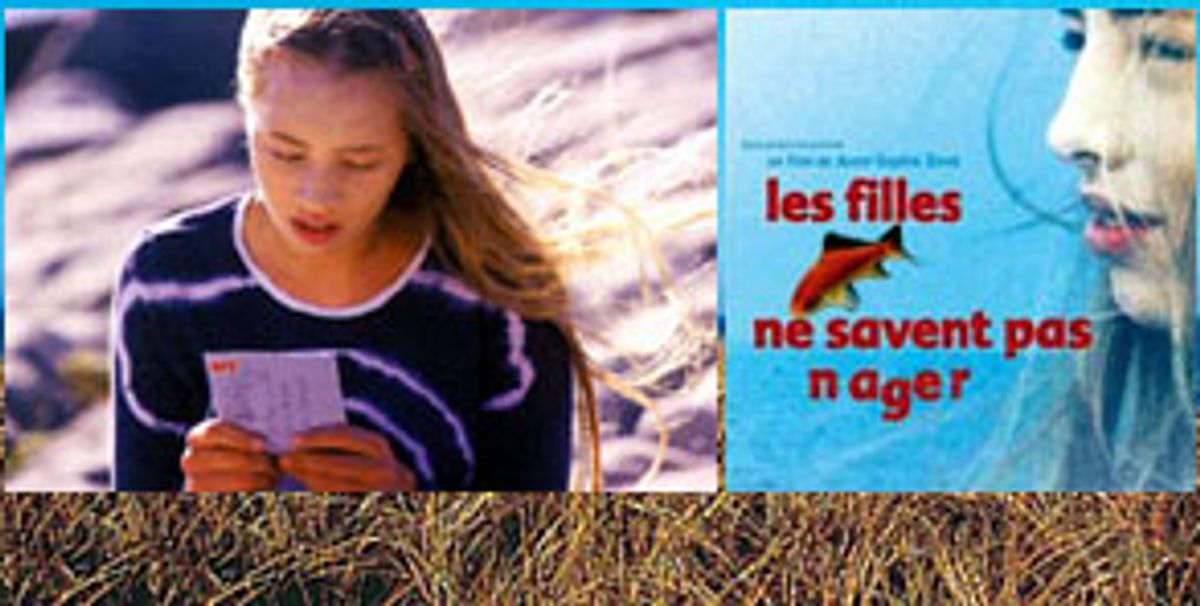 Fifi, 15, has big breasts. Pert and full, they are the golden trophies of her burgeoning, sun-bleached adolescent sexuality. During a French seaside summer, Fifi's straining T-shirts will fill the heads (and jeans) of the local boys with visions of sensual delight. And though only a select few will receive her favors, those stolen idylls will provide the girl a temporary respite from the turmoil of home and her parents' troubled marriage.

Clothilde is going through her awkward phase, with the developing body of a young woman and baby fat still clinging to her cheeks. Reunited with her best friend Fifi, she will express a hidden desire of her own that will lead to fateful consequences and change the girls' lives forever.

OK, so there are no characters in the French coming-of-age drama "Girls Can't Swim" with obvious names like Fifi or Clothilde. The teenage leads are called Gwen (God's gift to the C-cup) and Lise (the ugly duckling). But if that description makes you suspect you've seen the movie before, it's probably because you have.

Art films can of course be just as rigid and familiar as commercial pictures. Making her feature debut with "Girls Can't Swim," the writer-director Anne-Sophie Birot is working basically in the same manner as a commercial hack aping the conventions of what's come before. Everything about "Girls Can't Swim," even its passages of sensitive observation, feels secondhand, familiar -- and not in a good way. There will, we understand pretty early on, be teenage sex, confrontations between parent and child as well as between friends, and some big, melodramatic windup to illustrate the destructive potential of adolescent sexuality. Guessing just what that will be is essentially the same as guessing whodunit in a murder mystery, or just how the hero in an action movie will get out of each fix he lands in. It's a cynical way to pass time, the cynicism that comes from being presented with something you've seen a hundred times before.

To be fair to Birot, you can't exactly blame a French filmmaker for wanting to make a coming-of-age movie. From "The 400 Blows" on, French cinema has done pretty well by them. And I don't want to seem down on coming-of-age movies in general. Just in the past few years, pictures as diverse as "Set Me Free," "Show Me Love (Fucking Amahl)" and "Y Tu Mama Tambien" have shown the life and freshness that still exists in coming-of-age movies. There can be something refreshing about watching young people on screen anyway, even in commercial movies. The genre conventions may have been in place in movies like "Save the Last Dance" and "Crazy/Beautiful," but the young casts were responsive and alive -- and there's a special pleasure in watching young people dance or flirt or just hang out with each other. Even if what they're doing isn't new to us, it is new to them, and that sense of discovery can be transmitted to us.

I didn't feel anyone was discovering anything in "Girls Can't Swim." Apart from a few moments with Karen Alyx's redheaded Lise, with her awkward young body and tough-baby pout, Birot doesn't even seem to be interested in discovering her actors. Her lead, Isild le Besco, who plays Gwen, is being touted as the new hot young thing of French cinema. Birot gets all the mileage she can out of her breasts and full lips, and the way her upper lip peels back when she smiles. But she doesn't do anything to wake le Besco up as a performer (even when making love, she seems as if she's always about to wipe the sleep out of her eyes) and I began to feel that even a good exploitation filmmaker (like Roger Vadim in his heyday) would have been better at bringing out some personality in le Besco's Gwen.

And Birot makes a crucial structural mistake, focusing on Gwen for the first 40 minutes or so, then switching to Lise, and then finally bringing them together in the movie's last half-hour. We need to see the dynamic between these two friends a lot sooner. As it is, the developments in the last third of the movie seem to come out of nowhere, whereas they might not if we had a chance to watch them simmer.

A couple of seasoned actresses in the cast have enough smarts not to allow themselves to be canceled out as the young leads are. As Lise's mother, Marie Riviére (the neurotic heroine of Eric Rohmer's "Summer"), has one startling moment when she berates her daughters for looking so much like her ex-husband. But you get the feeling Riviére wants to build on the comedy of that self-absorption, and though she's very good, Birot doesn't allow her the emotional range her performance suggests she is ready to bring to the role. As Gwen's mother Pascale Brussiéres (who was also the mother in Lea Pool's "Set Me Free"), with those wary -- and weary -- almond-shaped eyes of hers, is as alert and intelligent as ever. I've never seen Brussiéres in a full-scale role, but she seems effortlessly capable of capturing the thought processes of worried, slightly harried women. She conveys the palpable and often inexplicably moving tension of women who have not had an easy time in life. She's both birdlike and steely-strong at the same time, and I love watching her.

For all the generic familiarity that hovers around "Girls Can't Swim," it's a more recent, and more original, movie that really does it in: Catherine Breillat's "Fat Girl." Though "Girls Can't Swim" was made and released in France before "Fat Girl," we are seeing them here in reverse order. But I think even if we had seen them in the order in which they were made, Breillat's film would wipe Birot's from our memory. "Fat Girl" is not an easy picture to watch (after seeing it at last fall's New York Film Festival, I could barely eat for the rest of the day). Breillat is not out to charm her audience and her treatment of adolescent sexuality is unforgiving and brutal. It also has the rigorous logic of cold rage. Even when the picture turns into something like a tabloid horror movie in the climax, the horror sinks into your bones because of the ruthless logic behind what Breillat shows us.

I think it's still possible for other, different sorts of coming-of-age movies to be made, movies that are not as confrontational or brutal as Breillat's (for example, neither "Show Me Love" nor "Set Me Free" seems trivial next to "Fat Girl"). But I also think that with "Fat Girl" Breillat has killed off the genre for conventionally sensitive coming-of-age movies. She has made the directors who address adolescent sexuality without going as far as she does seem like timid old agony aunts. (Breillat's "Romance" has done something similar to the presentation of sex in the movies. Next to "Romance," the Teutonic academicism of the currently voguish piece of art-house masochism "The Piano Teacher" looks like the Ph.D. thesis it is.) In terms of the coming-of-age movie, Breillat has blown up the landscape. With "Girls Can't Swim," it looks as if Birot is falling into the craters Breillat has left behind.