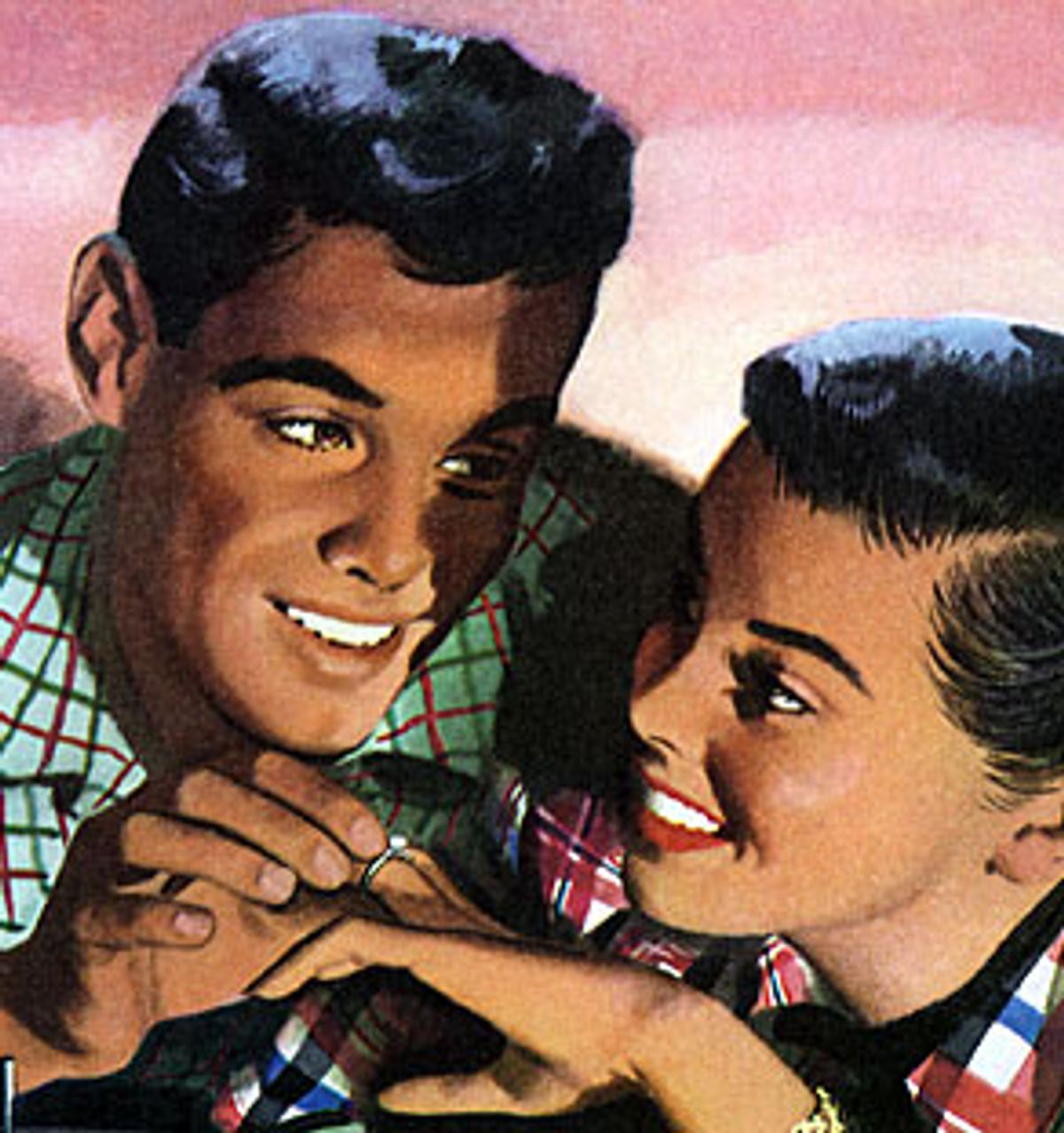 Their stories were similar. Many had grown up in poverty. Most had abused drugs. Some had served time in prison. And all of them had turned their lives around with the help of God and a family revitalization program that promotes marriage.

That was the message delivered by three couples who spoke earnestly about the virtues of marriage at a news conference on Capitol Hill Monday convened to promote marriage-friendly welfare proposals in Congress. While they all said they were not affiliated with any politician or legislative proposals, they represented the launch of what will likely be a long and contentious debate as Congress begins debating the reauthorization of America's federal welfare program.

And their message dovetails nicely with a preferred program by President Bush, an outspoken advocate of integrating religion into social service programs, who has called on Congress to allocate $300 million in annual federal funding for state and local initiatives that help nudge couples down the aisle.

"I love marriage because it's ordained by God," said Andre Boulware, a participant in the Institute for Responsible Fatherhood and Family Revitalization, a national nonprofit that focuses on empowering fathers to become actively engaged in the lives of their children in a loving and nurturing way. The institute hosted the press conference jointly with the Alliance for Marriage and the Empowerment Network.

Getting married helped secure a family setting and steady income for Boulware to support his girlfriend and her children, who were on welfare, he says. It also helped free him from a history of drug addiction, child molestation and prison.

"God gave me the strength and the institute gave me help," Boulware said.

Fathers, mothers and other family members at the institute receive comprehensive services that address personal and family development. The program helps participants land jobs, but is most focused on "turning the hearts of fathers to their children and the hearts of children to their fathers" and encouraging marriage.

Which sounds great, of course, but the president's support for the programs has come under sharp attack from liberals who view the proposed marriage promotion fund as a misdirected means of social engineering.

Despite the criticism, the plan's future seems bright. Last week, a Republican welfare bill that includes Bush's proposal won the endorsement of a House Ways and Means subcommittee. Sponsored by Wally Herger, R-Calif., chairman of the Subcommittee on Human Resources, the Personal Responsibility, Work and Family Promotion Act of 2002 reauthorizes the Temporary Assistance for Needy Families (TANF) program. It also reflects the president's welfare reform proposals, including his plan to direct millions to pro-marriage initiatives that fund premarital education and counseling.

The same day the bill was introduced, Bush held a press conference to highlight his central goals for welfare revisions. They included, he said, an emphasis on "strong marriages and stable families."

Herger's bill is scheduled for debate in the full committee next week and is not likely to face much opposition from Democrats. "There's not too much controversy about the [provision] that passed our subcommittee," says Rep. Ben Cardin, D-Md., minority leader of the subcommittee.

But it's still early. Counterproposals are already in the works, and critics are ready to strike.

The subject of single parenthood has been a part of welfare reform debates since the 1990s. The reason is simple: A growing body of research shows that children raised in stable, two-parent households fare better than those who are not. Children of single mothers are more likely to be poor than are children of married parents. They are also almost twice as likely to drop out of school, to have difficulty finding jobs and to become teen parents.

In 1996, conservatives successfully pushed through Congress two provisions aimed at reducing out-of-wedlock births. The first set aside federal grants for sexual-abstinence education programs -- the only federal funding specifically allocated for any kind of sex education. The second created a "Bonus to Reward a Decrease in Illegitimacy" -- $100 million each year to reward the five states that make the most gains in reducing birthrates among all unmarried women, not just those receiving welfare.

But "the illegitimacy bonus" has been a flop. The law does not require states to do anything to earn the bonus; the U.S. Department of Health and Human Services uses data that the states routinely submit to determine the winners.

The prospect of winning $20 million through the illegitimacy bonus, however, did help to motivate many states to address out-of-wedlock childbearing. But variations in state strategies and an inability to show a cause-and-effect relationship between states' activity and their statistical trends have made it difficult to determine who the real winners are in the battle to reduce illegitimacy.

As a result, Washington has haphazardly dished out federal funds to states based more on suspect statistics than on real action. While bonuses have been awarded to states that have taken concrete steps to address illegitimacy, they have also gone to states that have done little or nothing.

When the bonus winners in Round 2 were announced, a DHHS spokesperson acknowledged that the payments may be more a reflection of demographic changes, such as the increase in marital births or the decrease in the overall number of teenage women having children, than to successful state policies.

But instead of deflating interest in family formation, the failure of the illegitimacy bonus has simply altered the priorities of the welfare architects. Bush and Republicans in Congress have responded by shifting their focus from reducing out-of-wedlock births to promoting marriage.

Under the president's plan, the money previously spent on "illegitimacy bonuses" would go toward a $300 million annual funding stream for states that "reduce non-marital births and increase the percentage of children in married-couple families."

States would be able to spend the money on public advertising campaigns, programs that offer marriage counseling, skills classes for unmarried mothers and high school marriage instruction, among other things. The plan would boost initiatives already underway.

At least half a dozen states have already taken steps to fund these programs. Oklahoma has allocated up to $10 million to establish a marriage resource center, a public education campaign and youth outreach on the virtues of marriage. Arizona passed a $100 million marriage initiative. It funds community organizations that teach marriage skills, and provides vouchers to low-income couples who want to attend. West Virginia adds an extra $100 to a family's monthly welfare check if the parents get married.

Critics, including many women's groups, are voicing opinions of marriage promotion that range from outrage to extreme outrage. Many argue that instead of funding the promotion of marriage, the Bush administration should be pouring more money into economic aid and child-care assistance for single mothers -- programs to make low-income women more self-sufficient.

"The proposal takes money away from welfare, an under-funded poverty program, to intrude into people's lives, into the most intimate and private decision they can make," says Terry O'Neill of the National Organization for Women.

Isabel V. Sawhill, a senior fellow at the Brookings Institution and president of the National Campaign to Prevent Teen Pregnancy, opposes the Bush plan for a different reason. She thinks Congress should continue to figure out ways to reduce the number of births to unmarried women, especially those in their teens.

"The agenda does not address the real source of the problem, which is that too many women are having children before they are old enough to raise them or get married," Sawhill says.

More than half of first out-of-wedlock births are to teenagers, she says. They could be reduced if Congress funded sex-education and after-school programs that have been shown to reduce teen pregnancies, she says.

Certain Democrats in Congress hope to broaden the types of initiatives that could receive funding. Last month, Sen. John D. Rockefeller, D-W.Va., introduced a welfare reform bill that included a Family Formation Fund. Instead of limiting federal funding to marriage promotion programs, it would encourage healthy families, reduce teenage pregnancy, and improve child support and participation of parents in children's lives. The bill also would authorize a program that provides support and education to teenage parents.

Democrats on the House Ways and Means Committee are likely to push for similar changes to the Republican bill when it comes up for debate next week, Cardin says. "The president's plan is an improvement on the illegitimacy bonus," he said. "But there needs to be flexibility on how the money can be used."

Charles Ballard, founder and CEO of the Institute for Responsible Fatherhood and Family Revitalization, hopes criticism of marriage promotion doesn't obscure what he views as an important task at hand. To Ballard, different proposals will simply obscure what, to him, is a fairly simple issue. "We need to stop playing politics and support marriage," he says.

"Everyone wants a loving, caring husband."

Megan Twohey is a writer in Washington. She was formerly a staff writer for the National Journal and the Moscow Times.