My fellow Americans: Today I made a J-turn in a Camaro and fired many guns! Evildoers, shudder in fear! 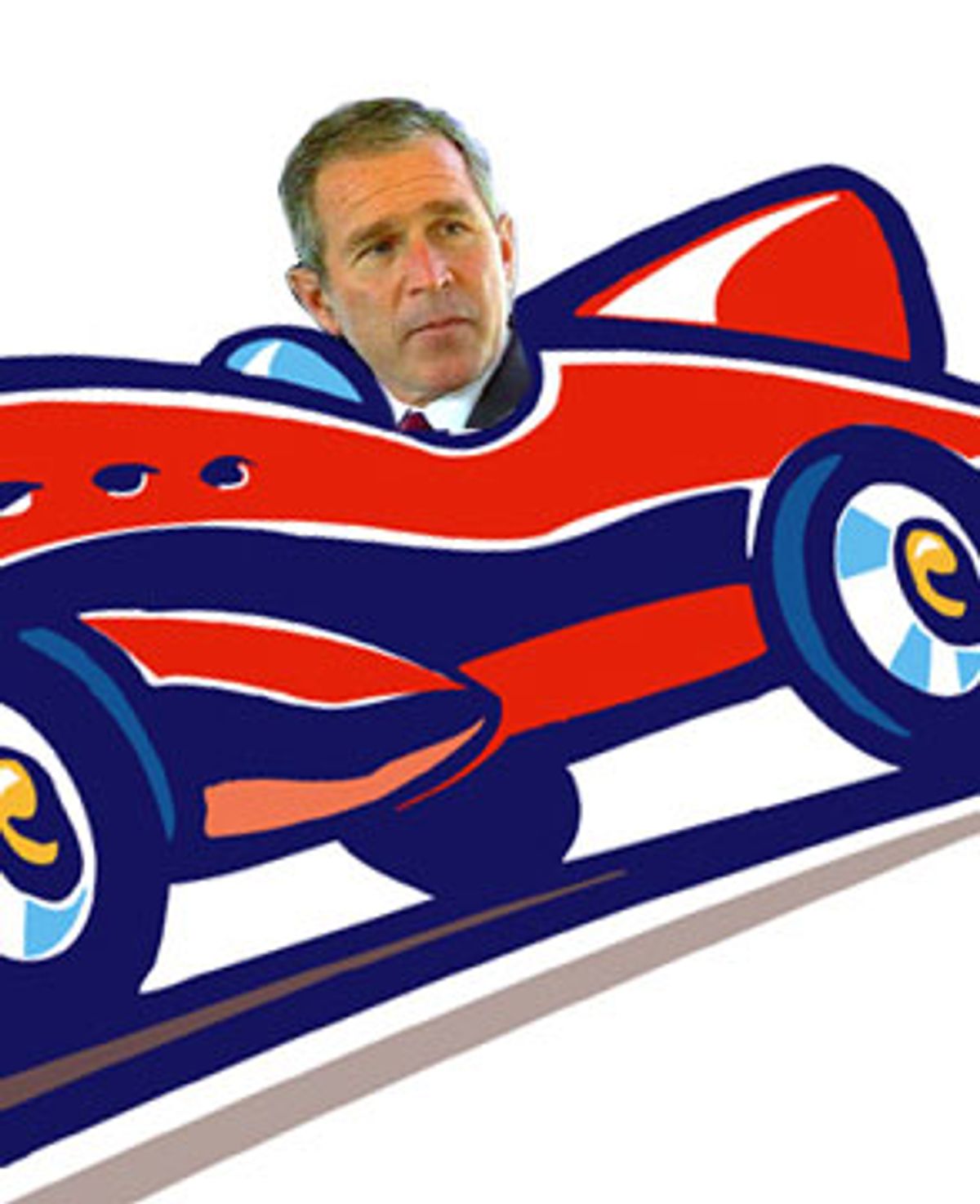 President Bush got behind the wheel of a sports car Friday, dropped it into reverse and executed an escape maneuver during a tour of the Secret Service training center.

Under the watchful eyes of Secret Service experts, according to his spokesman, Bush backed a 2002 Chevrolet Camaro down a practice track and spun 180 degrees at 40 mph. The car continued front-end-first in the same direction -- an evasive maneuver known as the "J turn" that Secret Service drivers might make if they came under attack while ferrying him or other dignitaries ...

Bush also fired several guns during his visit to the unmarked, 493-acre complex outside Washington ... Shedding his jacket and tie, [the president] also rode in a limousine that confronted a mock explosion, viewed weapons used by the Secret Service, watched as a dog picked out a suitcase with "explosives" in it and saw a simulated water rescue of an agent.

My fellow Americans, I stand before you having executed a J-turn, which is -- make no mistake -- the most challenging turn an American can make.

Let us be clear: The world as we know it stands at a crossroads. On the one hand we have freedom, and in the other corner, mayhem. I want to tell you a story. On Friday, the same day I beheld the impressive preparedness of the U.S. Secret Service, a suicide bomber exploded at a Gaza Strip checkpoint, wounding two soldiers, and Israeli forces killed seven Palestinians. The world faces chaos like it hasn't for centuries, and I pledge this you, my fellow citizens: Next Friday, I will tour the official White House kitchen facility, and experience the awesome power of baking and cooking for groups of six or more. [Applause]

This will be a behind-the-scenes visit, and -- let the evil ones, and the ones on the evil fence, hear this -- I will whip up my own cherry crumb cake. You see, people, this is the beginning of a campaign, and George Bush is one man who is not "afraid to commit." My administration won't rest until I've toured every fun and/or exciting facility available to me as president of these United States. Is there any doubt I will visit tirelessly with the executive janitorial services, making use of the undeniably forceful floor-waxing machines? By God there is not.

Some will tell you that your president is going to rest after he learns how go-karts are made. Guess again. In my heart, I know I will get behind the wheel of a steamroller. Correction: An American steamroller. [Applause]

Friends, the United States isn't something we inherit -- it's something we earn. This is a nation of egg tosses and scholastic aptitude tests, of special effects shows and good ol' fashioned jousting exhibitions. Sure, each of us might not have the opportunity to experience these liberties firsthand. But I do, because I'm president.

Listen, I could have a giant water balloon sling shot delivered to this very podium if I wanted. I could have the inventor give me a personal lesson, and then I could turn around and launch a wet one directly at his head. Or his behind. Doesn't matter. By the time he dried off, I'd have moved on.

"Move on." There's an idea for the evil ones to hear. That's right, America is a people prepared to move on. You do all the evil you want, but look at us -- we're still here, still moving on. Why? Because we have freedom, and we have pride, and our hearts tell us that Camaro J-turns are within reach, as long as we get that oil in Alaska.