Groups holding out for peace try to counteract a growing image of American Jews as pro-Sharon -- and, increasingly, pro-Bush. 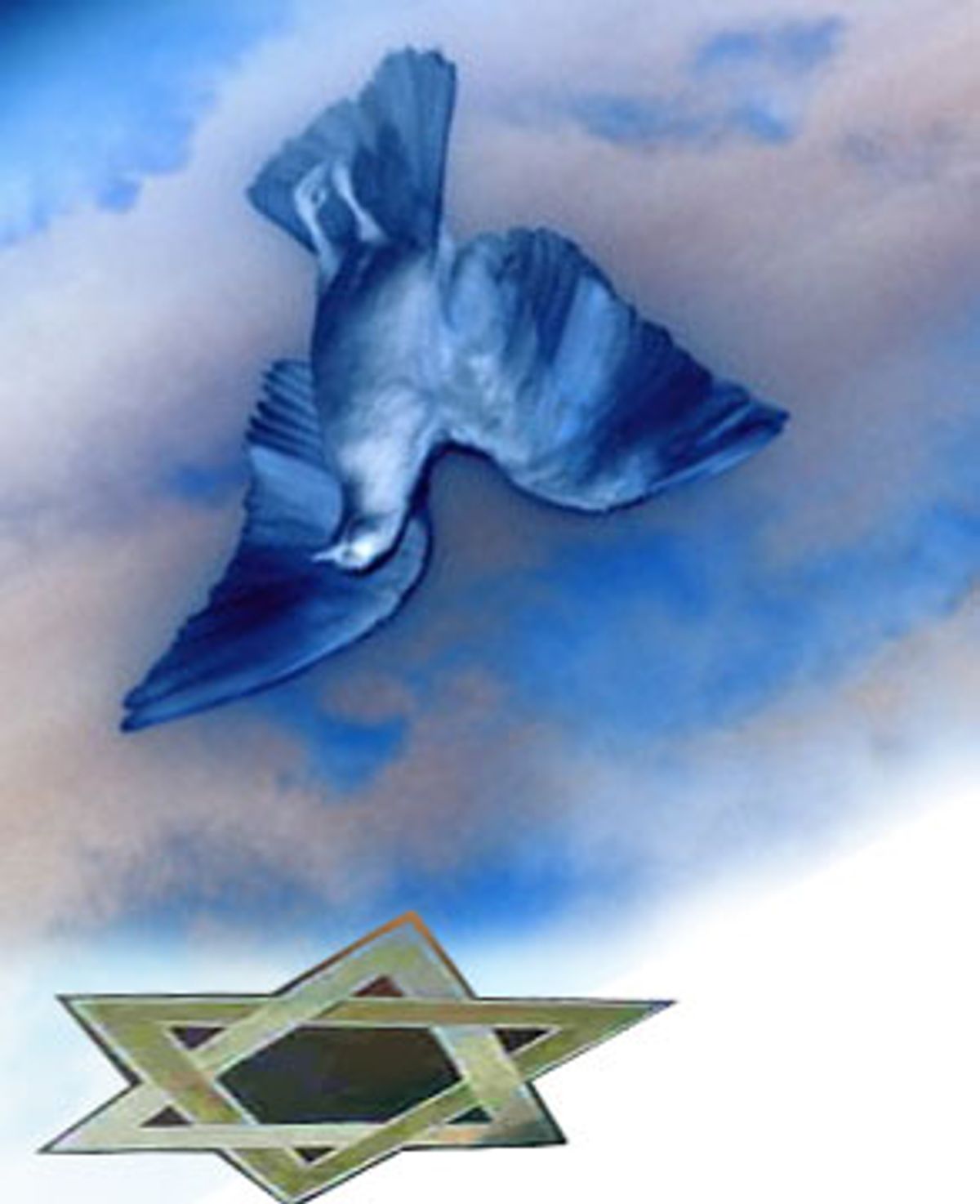 Jewish doves have a dilemma: How do you articulate a vision of peace and security for Israel while anti-Semitism is growing across the world and as American Jews increasingly back Ariel Sharon's hard-line Israeli government?

It's a question analogous to the one raised by the political discourse (or lack thereof) in this country since Sept. 11: With your nation under attack, is there room for any dissent without your being labeled an enemy of the state?

Liberal Jews are trying to figure that out now, and according to leaders of several Jewish organizations, discussions are underway this week about the best way to give voice to what they believe is the silent majority among American Jews in this time of crisis for Israel. A series of informal meetings have begun about how to delineate a position that supports Israel's right to defend itself but also makes a long-term, peaceful resolution -- including a separate Palestinian state -- chief among its goals.

But clearly, the doves have a long way to go.

Lewis Roth, assistant executive director of Americans for Peace Now, says there have been more discussions among many Jewish leaders and organizations about how to articulate an approach that differs from blind support for the Sharon government. He says his organization has been speaking to leaders like Rabbi David Saperstein, head of the Religious Action Center for Reform Judaism, to try to combat the political and grassroots power of some of the more powerful and conservative Jewish organizations.

"I think there are a lot of people who have been active on the Israeli peace issue for a number of years who maybe drifted away from a more dovish position at the beginning of the intifada who are now starting to come back to a more center-left position on things," Roth said. But Roth acknowledges that some organizations that were once considered supporters of the Oslo peace accords, like the American Jewish Congress, have tacked to the right and show no signs of supporting new negotiations between Israel and the Palestinian Authority, led by Yasser Arafat.

"I don't know that we've seen a stampede of people coming back, but there have been individual leaders who have been more vocal about a peace agreement," Roth said.

Some involved in these preliminary discussions remain skeptical that they can find a coherent alternative to the powerful voices of the Israel hawks in the United States. "I just don't think it's there yet," said one source involved in the discussions. "Will it ever be? I really don't know," he said, dejectedly.

"This has been a difficult time," says Saperstein. "Palestinian suicide bombers and Yasser Arafat's moral and political bankruptcy in terms of leading a path back to the diplomatic table has not left the people who believe in [former Prime Minister Yitzhak] Rabin's vision with a political program to follow."

Saperstein is among those American Jewish leaders who expressed dissatisfaction with this month's rally in support of Israel in Washington, D.C., complaining that conference organizers skewed the conference's political agenda toward Israel's hawks. Former Prime Minister Benyamin Netanyahu headlined the speakers' list at the rally, criticizing Bush's decision to allow Secretary of State Colin Powell to meet with Arafat, whom Netanyahu compared to Hitler and Osama bin Laden. When Defense deputy Paul Wolfowitz addressed the crowd and made references to suffering Palestinians, he was roundly booed.

Meanwhile, Saperstein says, Jewish leaders who believe in a political resolution that includes an independent Palestinian state have had a difficult time being heard at all.

"In the vacuum of their silence comes a sort of lowest common denominator: 'We have to support Israel,'" he says. "There is a deep frustration among many of us that there's not a voice in the middle who believes in peace. It's been very hard to get that message out in this climate."

Any new attempt by more moderate voices to influence the Middle East debate in this country faces a long battle. There are many divisions among the leftish groups. Americans for Peace Now, for example, has long-standing tactical disagreements with other pro-peace groups like the Israel Policy Fund that keep them from working together. And when asked how any new peace coalition might try to combat the entrenched power of other conservative Jewish groups and leaders, Roth remained vague, mentioning letter-writing campaigns and discussions about taking out newspaper advertisements.

But voices on the right have grown steadily louder, particularly after a Palestinian suicide bomber struck during a Passover seder in Netanya, killing 28 people. Many Jews who had previously toed a more universalist political line are suddenly rallying to support Sharon's incursions into the occupied territories.

In recent months, the most powerful of the Jewish groups, the Conference of Presidents of Major Jewish Organizations, has tried to influence the administration to take a hands-off approach to Israel. Though the conference contains a handful of peace-inclined groups among its members, including Peace Now and the Israel Policy Forum, the overall tenor of the conference remains strongly pro-Sharon.

Liberal Jewish leaders like Roth say the power of the increasingly bellicose conference and its lobbying arm -- the American Israel Public Affairs Committee -- is disportionate to its share of American Jewish opinion about the Middle East conflict. Part of its hardening stance is due to the influence and guidance of leaders like media baron and conference chairman Mort Zuckerman and executive vice chairman Malcolm Hoenlein, as well as the change in attitudes of centrist groups within the conference.

But Rebecca Needler, a spokeswoman for AIPAC, says that her organization's priorities and views reflect the views of AIPAC's 60,000 members and does not pretend to speak for the entire Jewish community.

But AIPAC's tremendous political influence has left many other groups -- both within and outside the conference -- struggling to find a new soapbox.

"One of the things that is of great concern is the fundamentalist or Christian right/neo-conservative alliance with some of the more hard-line elements of the pro-Israel community," said one left-leaning American Jewish leader who declined to be identified. "Not only because of Israel, but also because of what the implications are for other domestic issues that are important to American Jews."

The American Jewish vote has gone solidly Democratic -- they voted 4-to-1 against George Bush in 2000 -- and many Jewish leaders on the left bristle at what they see as a new, unholy alliance between conservative Republicans and pro-Israel hawks. Conservatives like New York Times columnist William Safire continue to taunt American Jews, telling them to reconsider who their friends really are, and claiming it is Democratic leaders like Sen. Tom Daschle, D-S.D., who are thwarting efforts to show American support for Israel.

There have been overtures from conservative Jewish groups to support the administration on high-profile domestic-policy fights in hopes of garnering more support from the president on the Middle East. Earlier this month, in a transparent political ploy, a group of Orthodox rabbis came out in support of drilling in the Arctic National Wildlife Refuge. In one of the last-ditch efforts to gain support for ANWR, Republicans tried to link drilling in the refuge to oil security for Israel. Republicans introduced an amendment that would have allowed oil tapped from ANWR to be only exported to Israel or used for domestic use. Sen. Joe Lieberman criticized the amendment as "incredibly cynical."

Conservative Jewish leaders counter that it is the doves who are trying to use domestic political pressures as leverage against the hawks. "I think the doves have taken on a different tack. They're focusing on more U.S. involvement," said one conservative Jewish organization official. "That's code for pressure on Israel. That's become very attractive as a political issue for Democrats. Democrats have got to criticize the president for something. So they're getting into this 'You need to do more; you're not doing enough.' From our perspective, doing something is fine as long as it's criticizing Arafat. The doves have a kind of tough-love approach toward Israel, and that's a big difference between us."

Though many liberal groups like Peace Now boycotted this month's rally because of the presence of hard-liners like Netanyahu, about 100,000 people turned out to show their support for Israel -- and a hawkish Israel at that. With headliners like Israeli Deputy Prime Minister Natan Sharasky and Netanyahu, more moderate voices were pushed to the background, leaving critics like Roth to say that the choice of Israeli speakers at the rally showed how "this could have been perceived as an anti-Bush-peace-initiative gathering."

Jonathan Jacoby, a consultant to many major Jewish organizations who was critical of aspects of the rally, did say rally organizers have not done enough to make amends for how Wolfowitz was treated. "There continues to be a good deal of concern about what that represents and why the organizers have not issued a public apology to Wolfowitz," he said. "It seems to me that that would be the No. 1 priority in terms of maintaining a good relationship with the administration."

New organizations like the Tikkun Community, headed by Berkeley rabbi Michael Lerner and activist academic Cornell West, have sprouted up attempting to give voice to these concerns. Hoenlein dismissed Tikkun as a fringe organization with no notable constituency within the American Jewish community. While Lerner and West's group may be easily marginalized, there are more mainstream groups inside Hoenlein's own organization that have been critical of the way the Sharon government has responded to the terrorist attacks inside Israel.

"I think it's impacted our ability to work in conjunction with other American Jewish groups that may have moved to the right on the political spectrum as the result of the outbreak of the intifada," Roth says. "Within the Conference of Presidents of Major Jewish Organizations, there has been group of 16 to 19 other groups with which we would work on occasion to promote a pro-peace perspective, and clearly not all those groups are there anymore to take a similar approach."

Roth said he was encouraged by AIPAC's executive committee's decision to overwhelmingly reject a policy statement that would have lent unequivocal support to Israeli settlers living in occupied territories. "That was overwhelmingly defeated. So perhaps there is something of a reconsideration of the center-left of our community, of people who really want to see a political solution to this conflict."

The doves, however, have to worry not only about building a formidable coalition but also about defections from their own ranks. Abraham Foxman, executive director of the Anti-Defamation League, for example, has surprised colleagues by what they've perceived has been a swing to the hard right.

Foxman pays little heed to those labels and says the Jewish community has only become more united since Israel's sense of security has eroded.

"There is a realization that this is Israel's second war of independence," says Foxman. "There is increasing anxiety that the world has lined up on one side -- the U.N., the E.U. -- against Israel. The Jewish community feels a lot more vulnerable. Israel feels vulnerable. It took us a while to realize, for many of us, that the days of 1993, of promised peace and tranquility, have not yet arrived."

When asked about the differences between segments of the Jewish community about how best to achieve peace and security for Israel, Foxman said, "There are a lot of things about which the community no longer has the luxury of ideology or philosophy."