Its support for Israel is unwavering -- but New York's just-launched paper is a little shakier when it comes to editorial fundamentals. 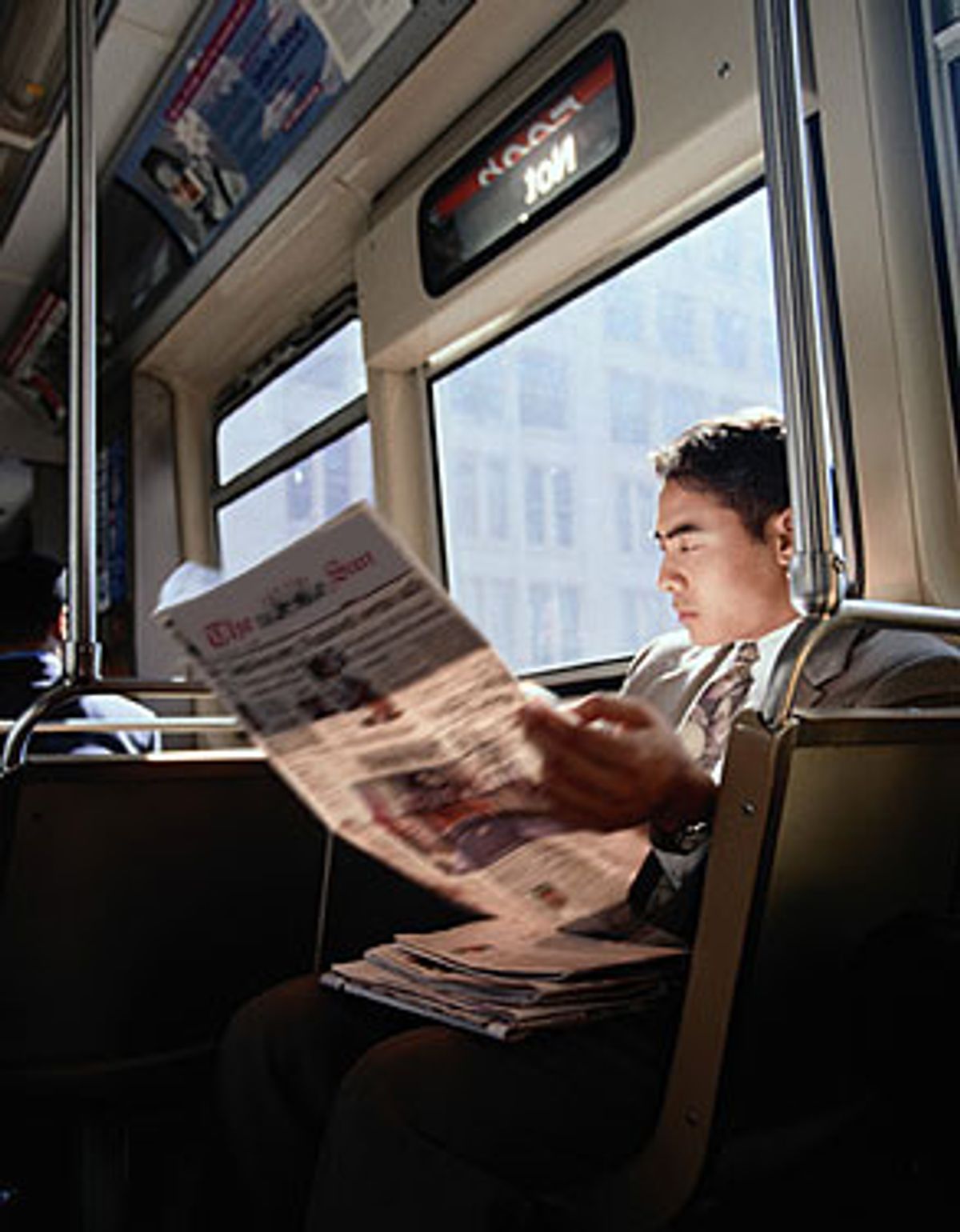 At a time of growing monopoly and declining competition in the media world, it's hard to begrudge a group of optimists who think it's time to launch a 50-cent newspaper in New York. Hard, but not impossible. Because after reading the first week of the New York Sun, the new broadsheet launched to much fanfare on April 16, even the most hardened ink-on-paper media junkies were forced to concede that some things are better left untried.

Armed with $20 million from investors such as conservative media tycoon Conrad Black -- last seen in the news taking a $300 million loss on his Canadian newspaper launch, the National Post -- and Michael Steinhardt -- last seen in the news writing a letter to President Clinton urging him to pardon disgraced financier Marc Rich -- the Sun's founders are reviving a newspaper name that disappeared from city news racks in 1950. Today's New York Sun aims to deliver an educated read (i.e. no serious sports coverage, TV listings, weather forecasts or winning lottery numbers) to conservatives who don't think the New York Times and its 100-plus metro reporters and editors are delivering enough local news. Talk about a tough niche.

The paper's dedication to covering the city of New York is admirable, but so far it seems to have translated merely into tedious stories about recycling, union votes and TV antenna construction. (Week 2 did see more substantive local offerings from the Sun, focusing on Board of Education issues.) The fact is the Sun pays less attention to the city than its well-established competitors. Instead, the paper uses up its measly 12 pages each day carrying lots of national and international stories, most of which are wire copy. On Thursday, for instance, the Sun's AP wire was working overtime, producing 24 of the paper's stories, while the Sun's lean, 12-person editorial staff produced eleven.

Not surprisingly, there were some opening-week blunders, one of which was on par with those back-page howlers in the Columbia Journalism Review. On Friday, some readers of the Sun's business page might have thought Pamela Anderson had somehow fallen afoul of the Justice Department, with a photo of the former "Baywatch" babe placed near a headline that read "Talks Between Anderson, Justice Dept. Collapse." The Sun, of course, meant "Andersen," as in Arthur Andersen. Pamela, it turned out on closer inspection, was simply appearing at a TNN party.

And the new kid on the newspaper block might be forgiven for a bit of shameless self-promotion in a Wednesday story headlined "Sun Shines At NYT Co. Annual Meeting; Times Publisher Says He's 'Worried.'" Really? Did Times publisher Arthur Sulzberger Jr., who oversees a newspaper with a circulation of 1.2 million, actually say he was specifically "worried" about the upstart Sun? It turns out that Sulzberger simply remarked that he "was worried about the competition" -- as is every publisher in America.

The Sun was bedeviled by a number of other unfortunate kinks during Week 1. Thursday's Page 1 piece about an Iranian dissident on the run in Germany proved to be a head-scratcher. Luckily for whoever wrote the story, his or her byline was omitted. Or does somebody want to step forward and claim credit for these two nut-graf sentences? "The dissident, a lawyer and Shiite Muslims cleric named Mehdi Haery, told the New York Sun that he was visited by a man with a briefcase loaded with a knife, brass knuckles and an electric shock device, who said Mr. Haery had been sentenced to death by the Iranian justice ministry. The Bundeskriminalamt, Germany's federal police responsible for anti-terror operations, took the visitor away, but then asked Mr. Haery to go underground, because Germany's interests in Iran were very delicate and Mr. Haery shouldn't endanger them, according to Mr. Haery's account."

The liveliest part of last week's Sun was the breezy, always-entertaining, 100-word DailyCandy fashion and arts column. Alas, readers can simply go to Dailycandy.com and read it for free.

The Sun's most glaring flaw, though, is its sense of news judgment. On Friday the paper went big with a story about an Arab student at New York University who received an award, according to the school, "for her efforts in raising consciousness about issues of concern to the Arab community." (Hers was one of more than 100 given out by NYU.) The news hook? A pro-Israel group at NYU called TorchPac had opposed the award because last fall the student posted a Web article, by white supremacist David Duke, that was critical of Israel. At the time, the Arab student asserted she didn't know who Duke was, and she quickly took it down when informed. Nonetheless, TorchPac accused the student of being anti-Semitic.

That's front-page, above-the-fold news for a New York daily? Some NYU students couldn't fathom why. Posting a letter on Jim Romenesko's MediaNews, Brandt Gassman, the news editor for the Washington Square News, NYU's campus daily, wrote that the Sun story "smack[ed] of (an anti-) Palestinian witch hunt on the part of The Sun's editors. I fail to comprehend how a dumb mistake made seven months ago by one NYU student warrants front page play in that paper." In addition, Gassman told Salon, "It struck us [at WSN] as a blatantly political article."

The Sun's president and editor, Seth Lipsky, recently told an interviewer that he wanted the Sun's editorial page to champion "limited government, individual liberty, constitutional fundamentals, equality under the law, economic growth ... standards in literature and culture, education." But the paper's primary passions are clearly Israel and Jewish causes. Lipsky once edited the Forward, the New York Jewish daily newspaper, and has been described by the New Yorker as a "Jabotinskyite Zionist." The Sun's worldview was summed up on launch day in an unsigned editorial, "The War Against the Jews." Decrying anti-Semitism, "a virus that has claimed millions of lives over the centuries," the editorial drew a parallel between the Holocaust and recent pro-Palestinian demonstrations held in America, because they "are by and large rallies that support an anti-Semitism that is unthinkable to those who know the history."

Elsewhere in the Sun's limited news hole last week, there were stories about Jewish book awards, a synagogue cantor facing sexual assault charges, Jean-Marie Le Pen wooing Jews in France, an upcoming book about Anne Frank, additional editorials about Israel, as well as ads purchased by the Anti-Defamation League, Peace4israel.com and the Zionist Organization of America. And of course there was plenty of coverage of the violence in the Middle East. The Sun reported on Page 1 last Thursday that by backing a U.N. resolution, "Austria, Belgium, France, Portugal, Spain and Sweden are throwing their support behind the PLO's terrorist attack on Israeli civilians."

The next day a Sun headline reported that U.S. "Taxpayers Send $92 Million More to Palestinians." The accompanying article explained that the White House had waived restrictions on aid to Palestinians, but it never explained where the $92 million figure came from. In fact, the figure never even appeared in the article. A related editorial suggested the White House waiver "will open the way for something like $100 million in taxpayer funding to make its way to the Palestinians."

Whether it's $100 million or $92 million, needless to say, the Sun's editors didn't think the Palestinian aid was wise. But the editorial's anti-Palestinian rhetoric was extreme by the standards of the mainstream press: "Years from now, students of history are going to look back on the American funding of the Palestinian Authority the way they look back now on, say, the collaboration of the Swiss banks with the enemy in World War II."

The Sun's debut made a splash in New York's self-obsessed media waters. The paper has already inspired two critical Web sites, the Smarter New York Sun and Like Father, Like Sun. But whether or not the slim, narrowly focused paper can find a sizable readership in the city's media-drenched market remains doubtful. If the paper doesn't show marked improvement soon, that $20 million investment will have purchased a pricey footnote in New York's corpse-littered newspaper history.

Editor's Note: This article has been corrected since it was first published.