By utterly failing to address the church's sex abuse scandal this week in Rome, the Catholic aristocracy demonstrated its complete irrelevance. 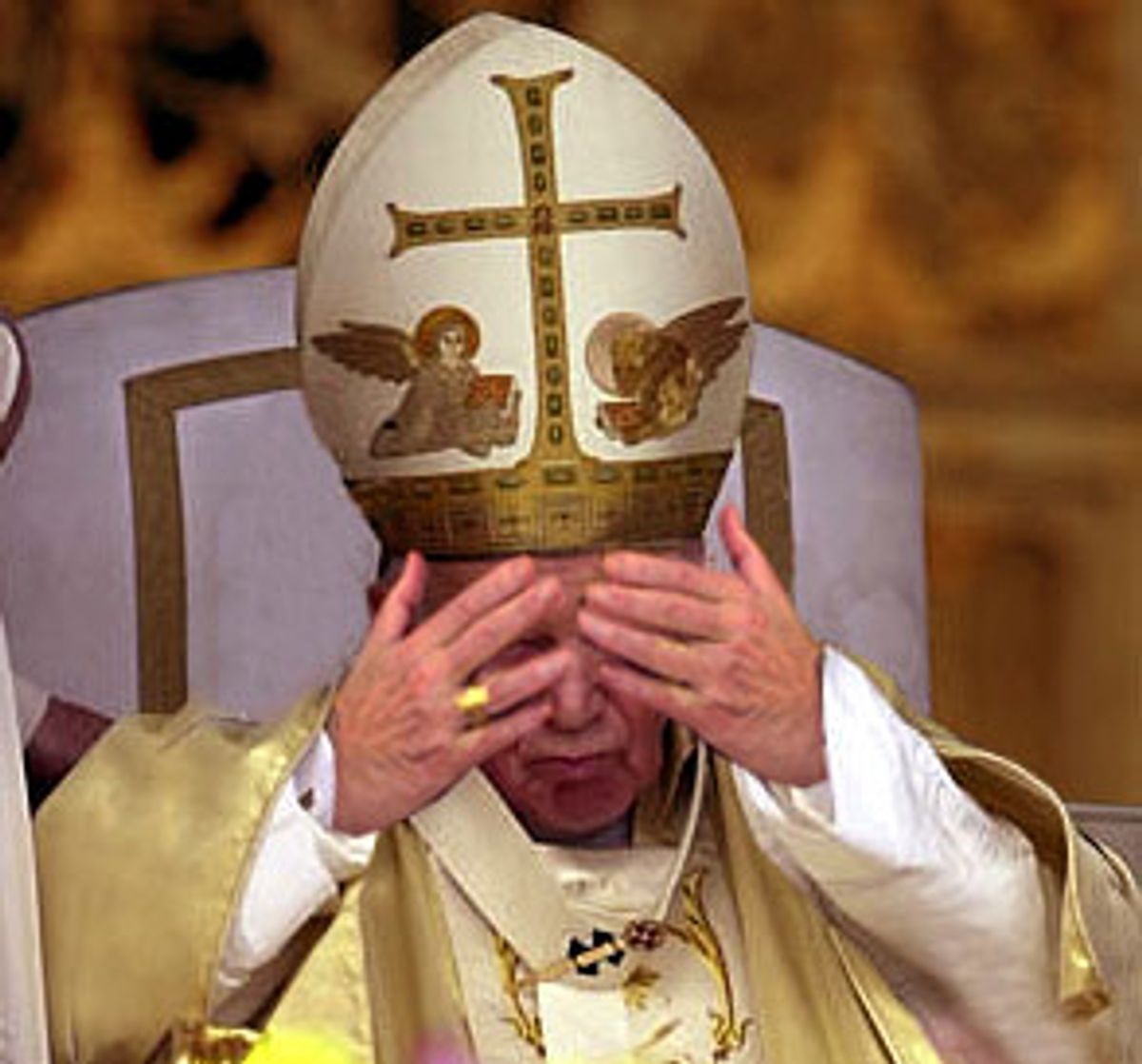 Ordinary American Catholics bear a wisdom within them that was hauntingly absent in their cardinals as they announced on Wednesday, to the melancholy taps of an uncertain trumpet, their unfinished plans to deal with the church's roiling sex abuse scandal -- a plague that they do not understand, although it has long afflicted their people, whose advice they have not sought. There is something poignant about good men bumbling solemnly in public, as travelers with 19th century tickets might on finding themselves on the concourse of the 21st century -- what place is this, what is that noise overhead, what are those devices people murmur into as they hold them to their heads?

The American cardinals' stunned out-of-synch surprise at finding themselves standing in postmodern Rome in medieval robes convinces everyday Catholics that the current crisis is not of the church as a great religious faith but rather of the church as a hierarchical organization -- clanking, clumsy and good only for museum display. This is how we lived in the days of the divine right of kings.

Average Catholics retain their faith in their church but they have lost their confidence in that church's leaders. Is there any wonder, after the utterly depressing Wednesday night presentation by these seemingly good and gentle men, as they proceeded to shred the flag of their own authority with their bewildered, belated, and finally benighted effort to get out front on an issue that they have been behind for 20 years?

This presentation by these crimson-clad princes of the church may be compared with the funeral of Edward VII -- the last gathering, in 1910 London, of crowned heads and monarchs who rode their royally caparisoned mounts in the solemn spectacle, uncomprehending the fate that awaited them and their hierarchical tradition in the muddy wasteland of the First World War. What is left of the departed era of kings on top and commoners on the bottom wheezes now in a combination of soap opera and waxworks as a tourist attraction in Great Britain.

The cardinals assembled in Rome seem just as uncomprehending of the fate they called down upon themselves like doomed mythic gods, as they proposed a garbled answer to a question they were unable to ask clearly about a subject they were unable to define at all. That most of the cardinals did not bother showing up to explain themselves at the final news conference, pleading "other engagements," offered another pathetic footnote to their already moldering claims to live and rule from ecclesiastical sky boxes high above and well beyond the expectations that bind ordinary humans who live so far beneath them.

Cardinal Theodore McCarrick of Washington, speaking for his brethren, was hard pressed to explain why there was no mention, in the vague propositions his confreres had authored, of these ordinary people. They were in there last night, he said, unable to voice what he may have suspected -- that the cardinals had been so busy worrying about keeping their balance on their high perch that they failed to look down to that level where the ordinary people, whose sons and daughters had been plundered by priests, suffered, lived and, miraculously, still believed. Only hierarchy-induced vertigo explains why the church elite had lavished so much attention on the victimizing priests and so little on those they had victimized.

Let me see if I've got this right. These grown men traveled thousands of miles across the Atlantic to Rome to find out from the pope that the sexual abuse of minors is both a crime and a sin? I am not making this up.

The cosmos conspires against hierarchical structures in the space/information age. The first impulse of hierarchs is to control everything from that peak where they feel they have been placed like immaculate chess pieces by the hand of God himself. In the Loyola University study of bishops done by Dr. Mary Sheehan and Dr. Frank Kobler, we learned that these men suffer the hierarchical syndrome, for which no cure has been found. They believe as earnestly as Eagle Scouts that they have been chosen from all eternity to be successors to the Apostles, that it was in the plan all the while -- royal blood is royal blood, why fight it? -- that they were destined to be placed above others with power and privileges more sumptuous than the virgins in a terrorist's dreams. As one responded when named a bishop, "It humbles me to be raised above my brother priests."

All this sad self-importance revealed itself in the two-day exercise in Rome, when the cardinals' main goal soon became apparent: They want to make sure that the pope approves of what they do. So they took their lead from the pope's hard line about there being no place in the church or religious life for those who abuse children. That's it, by God or by John Paul II, whichever comes first, one strike and you're out of the priesthood, chalice, Roman collar and big car, too. The great problem, as some of them soon realized, is that the cardinals could not define the strike zone -- is it a serial predator or a guy who slips once? Does the clock start now or do we make a sweep through the files to net more of the dead, the demented and the forgotten? Well, never mind, we can wait until June, when the American bishops convene in Dallas, to sort it all out -- we pray.

Catholics want to admire and love their cardinals, but their affection is as sorely tested by this maladroit performance as a child's is when his father comes home drunk on Christmas. Ordinary Catholics are disappointed that these men, so knowing about achieving lofty office, seem so clueless about understanding human problems. Catholics do not ask much of their bishops and other church leaders. They are dismayed rather than angered when they get so little in return about a problem that the bishops have spoken about, getting themselves in deeper and failing a little more, in a succession of languages.

First it was the language of law and insurance to protect corporate assets; let's take this case by case, diocese by diocese, fight it all the way. But wait, the public told them, you're pastors who should be protecting your flocks not your flanks. So then they shifted to the forked tongue of public relations. Sentences containing passive-voice phrases, as in "mistakes may have been made," were troweled into place by P.R. experts. "Here's how you handle it, Bishop, in that tight spot when they ask you to tell the truth about what really happened." And lately, they have started talking the talk and walking the walk of criminal justice, turning in reams of names, sometimes of the dead, sometimes of men with unproved accusations -- it's like throwing babies off the sleigh in Russian novels, anything to keep the wolves from devouring us.

Catholics don't think it's rocket science, or even heavy theology, for bishops to understand what they know so simply in their hearts. Truth and falsehood differ, as do openness and evasion, disclosure and coverup, the elements that the robed monarchs seem to feel it is their right to mix and match with divinely granted impunity. Average worshipers also understand that their designated leaders had two decades, not just two days, to come to grips with a scourge that has damaged so many innocents -- including the thousands of generous priests who live in the shadow that has been lengthened by the cardinals, who are more intent on protecting themselves and being approved by the pope than on taking care of their people. Why is it, ordinary Catholics ask, that they still don't get it?

We have attended -- no flowers, please -- a funeral, not Edward VII's, but of anachronistic religious royalty, that gilded pyramid on the point of which we find more bishops clustered than angels on the heads of pins. Just below are the higher clergy, right over there, your excellency; and below them, the priests -- are you comfortable, Father? -- and on the bottom, bearing the whole creaking structure on their backs, are the ordinary Catholics, whose children were offered up to the insatiable gods of the immature and unhealthy.

Catholics need weep no tears at this death of this hierarchy. It was an inside job, a victim of its own overstuffed pride, a Titanic that missed the iceberg but sank under the weight of the first-class passengers. The church has not been assaulted by progressive theologians or pro-women clerical activists. Nor has it been undone by homosexuals or by the eroticized culture of America. This decaying aristocracy did not go out with a bang but a whimper, that slow, sad exhalation of breath coming from the cardinals. They self-destructed not by taking some grand risk to reveal the truth, but by just standing there blankly, passionlessly -- their faces, like those of the citizens of Pompeii, fixed in the expressions of eternal puzzlement with which they presented themselves to their people at a grave moment.

Catholics also understand that they, not the crimson-robed cardinals or the gold-ornamented buildings, are the church. This tragic episode allows the faithful a moment to clear away the marble debris that lies scattered around the pedestals from which the cardinals once reigned. In a profound rhythm of Catholic life, this destruction will be followed by resurrection -- a rebirth that will come not through the church's present timid and fearful leaders, but through the undying spirit of its everyday believers.