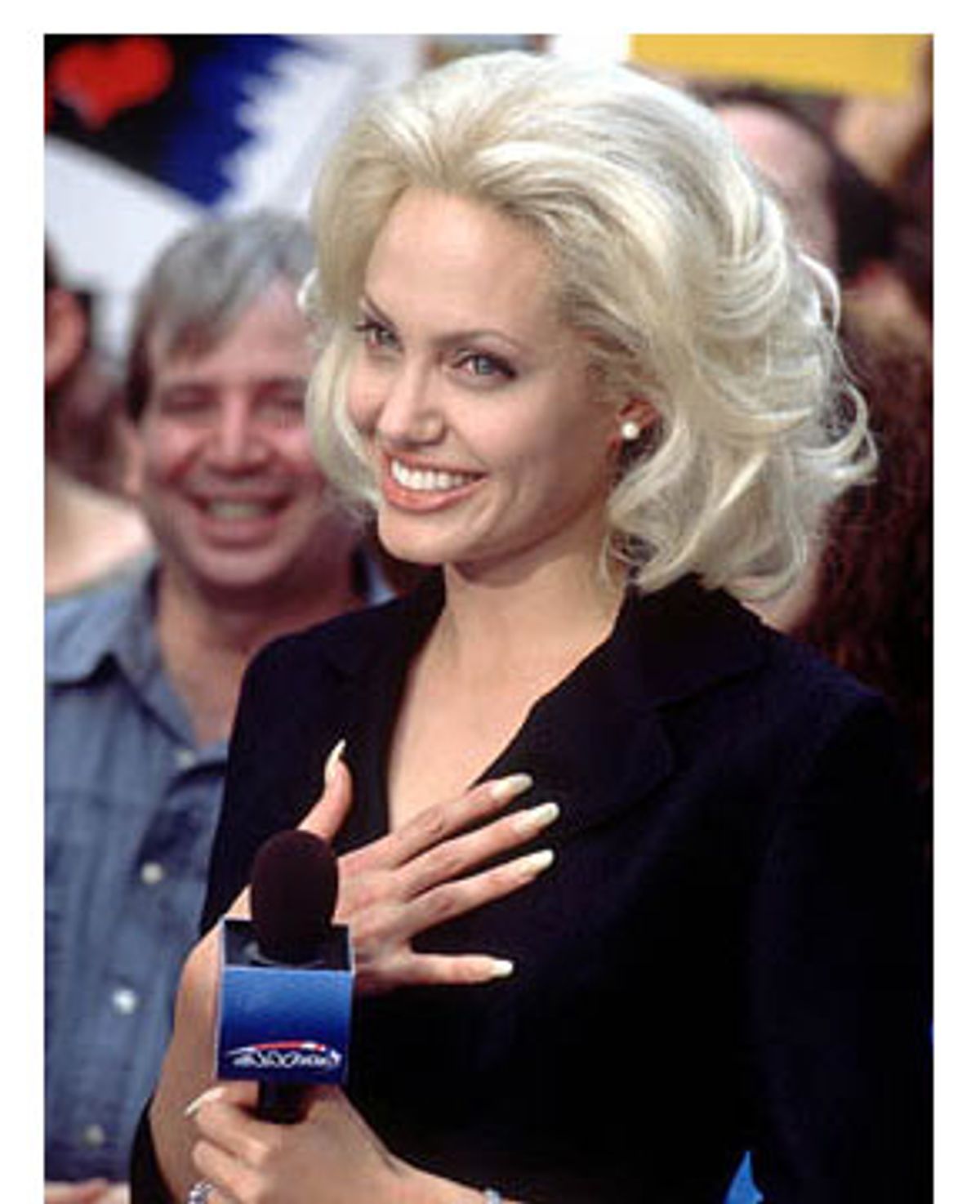 Early on in "Life or Something Like It," we discover that the lead character, Lanie, who's played by Angelina Jolie, has just one week to live. There's only one problem: We haven't yet learned to like her enough to care about that. You might find your brain cluttered with a cacophony of sudden questions: A week? What's that in movie time? Will I be out in time to catch "Gentlemen Prefer Blondes" on AMC?

Of course, we're not supposed to like Lanie just yet. She must first undergo a dramatic transformation, instigated by a homeless street-corner seer named Prophet Jack -- no relation to Monterey Jack -- played by the always-wonderful Tony Shalhoub.

But there's very little Shalhoub and an awful lot of Jolie in "Life or Something Like It," and it isn't Jolie at her best. Stephen Herek's "Life or Something Like It" is dimly entertaining, the sort of thing that doesn't insult you so much that you feel compelled to flee the theater, but it's too inert to be anything close to charming or compelling. It's a comedy-romance about committing to living life to the fullest, yet it's oddly noncommittal itself -- Herek pumps it with enough juice to keep it chugging and sputtering to the finish line, but just barely.

Jolie's Lanie is an extremely successful Seattle "TV personality" (she actually uses that term to describe herself) who works for one of the top local affiliates. Marilyn Monroe is her obvious idol, as we learn when we see a clip from "Gentleman Prefer Blondes" in a childhood flashback sequence (a clip that only makes us long for the real thing). That means she totters around the Seattle streets in sky-high stilettos, ultra-tight jackets stretched over her miraculous bosoms (which would be a wonderful sight, if only half of those jackets at least fit her properly) and a tousle of platinum candy-floss hair.

She works out at the gym some four hours a day (at least, that's what it looks like), has a handsome, monosyllabic Seattle Mariner boyfriend, and delights in exceedingly shallow conversations with her gal-pal co-worker Andrea (Melissa Errico), who is barely a presence in the movie except as a dishtowel to absorb Lanie's careless, catty comments. This is supposed to bother us a little bit, but not too much: Lanie is just a fun girl, after all -- not to mention a very ambitious one. She wants a national gig, which will ensure that she has at last attained what she sees as the perfect life.

So when her workplace nemesis, a cameraman named Pete (Edward Burns), introduces her to Prophet Jack, who utters his dire prediction (he's never wrong, of course), she at first struggles to deny her impending death. Then she begins to change her life, which amounts to stopping to smell the proverbial flowers (or, in Lanie's case, leading a group of striking transit workers in a rousing rendition of the Rolling Stones' "Satisfaction" -- on-camera). As part of the process, she of course must fall in love with Pete, who, with his rumpled flannel shirts and faintly perceptible chin stubble (which, in movie shorthand, mark him as an honest dude) was previously considered far beneath her standards.

Any of the above could be fine, if only Jolie succeeded in making us care about Lanie -- even to the point of enjoying her voracious vapidity -- in the movie's first half-hour. Or its last. Jolie has proven to be a marvelous actress, not just in the performances for which she's been widely recognized ("Girl, Interrupted," for example), but in the kinds of movies that quickly, and often undeservedly, slip off people's radar ("Pushing Tin").

But Jolie's line readings here don't have any jazz, and her character doesn't change as drastically as she needs to. Lanie's attempt to reconnect with her lost self, caused by the fact that she believes she doesn't have long to live, strikes us as small and temporary and not particularly heartfelt. For instance, when we see Lanie stretched out on her previously neat-as-a-pin couch -- now laden with magazines, leather jackets and the LP sleeves of forgotten '80s punk bands -- wearing stylish bad-girl black-framed glasses and a Social Distortion T-shirt, we think we may be getting somewhere. But the cool glasses, not to mention Jolie's sudden spark of liveliness, are just a novelty for that one scene. And she never gets rid of her harsh, oversprayed 'do (it reads bombshell, and not in a good way), suggesting that not even a reconciliation with good old Social D. is going to do her any good.

Worst of all, Jolie, whom I consider a great beauty in a wonderfully idiosyncratic way, doesn't even look so hot. Her features are strong to begin with, but every one of them looks cartoonishly exaggerated here: Her limbs are way too skinny; her lips don't look lusciously bee-stung but weirdly swollen. Her eyes are coated with a dewy glaze that's distracting in her close-ups. Nothing seems to be working in harmony, as if the movie's costumer, cinematographer and makeup artist never bothered to compare notes -- that's bad news for any actress, whether she's stunning to begin with or not.

Director Herek has a knack for weightless but satisfying entertainments ("Rock Star," "Bill and Ted's Excellent Adventure"), but the gears just don't mesh properly here. The script, by John Scott Shepherd ("Joe Somebody"), ambles too cautiously to pick up any momentum. One of the movie's few surprises is that Burns actually seems reasonably believable and likable, instead of simply turning his regular-guyness up to the optimum setting and then setting the cruise control, which is his usual shtick.

"Life or Something Like It" could have been a significantly better movie if only we'd been given more to like in the central character. Lanie's dream is to be just like her role model, a Barbara Walters-style interview maven named Deborah Connors. Connors is played by Stockard Channing, in a tiny but perfectly turned performance, and even her brief presence manages to throw the whole movie out of whack.

As the take-no-prisoners interviewer who makes all her subjects cry, Connors is the type of woman Jolie's Lanie thinks she wants to be. So why is Lanie's transformation into a "real" person so much less believable, and so much less gratifying, than Connors' over-the-top cartoon? The big question in "Life or Something Like It" isn't "Will Lanie live?" or even "Can Lanie change?" but "Am I ever going to give a fig?" That's the fatal question the movie can't answer.