Who's conning whom in Fabi 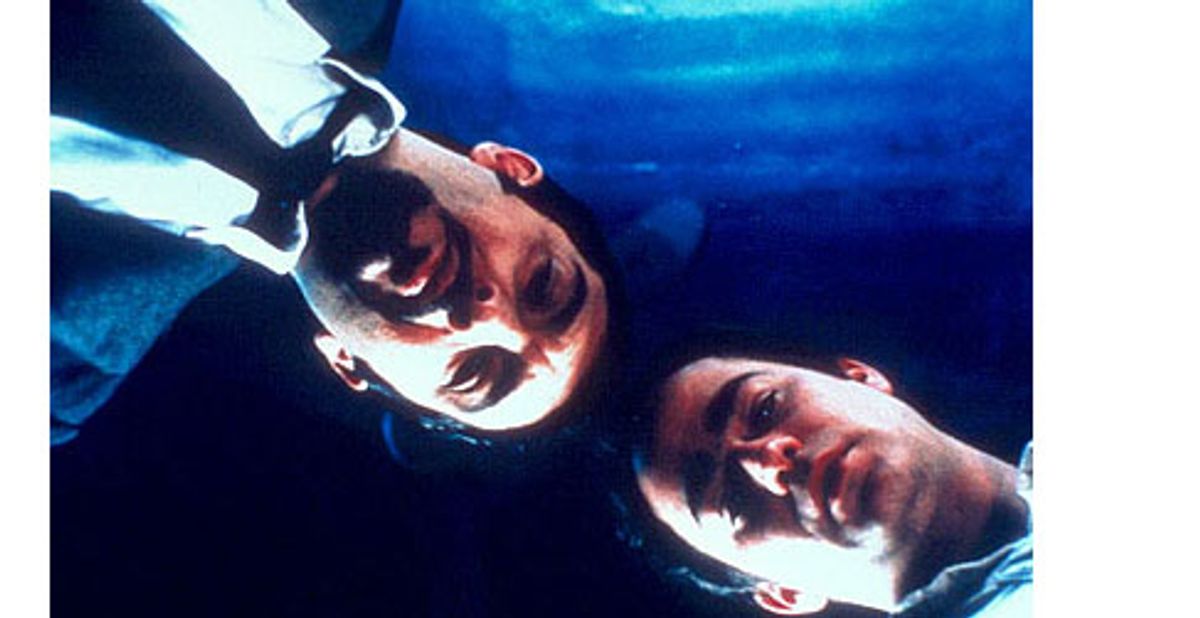 "Nine Queens" traverses the dizzying scams of two Argentine con men and dares us to stay one step ahead of them. Writer-director Fabián Bielinsky drops the duo into a high-stakes dupe, and then rolls over us just when we figure out the jig. Juan (Gastón Pauls) and Marcos (Ricardo Darín, a radiant shyster compared to the dumpy mid-life crisis case he played in "Son of the Bride") meet at the start of the film in the Buenos Aires version of a bodega. Juan is a nice-guy type who gets caught trying to pull a scam. Marcos, a street slickster who has seen the whole thing go down, comes to Juan's rescue, pretending to be an undercover cop and spiriting him away from the owner.

The two start discussing their art, even showing off a few tricks for one another. Both are small-time criminals, adept at short change switcheroos and small confidence plots. There's some sense that both would like to hit a big payoff -- Juan very much needs it -- but there's a lot these guys won't do for money. Marcos is the kind of guy who's after the soft dollar; he won't work for it like his gorgeous sister, who toils away at a classy hotel. Still, he's not a thief, he explains while casually walking off with a newspaper from a magazine stand. What he means, really, is that he's not merely a purse-snatcher, a stick-up guy or a street hustler. In a way, he's invoking an old canard: A good con man -- from a three-card monte dealer to a Nigerian diamond importer -- preys on the greed of his victim; the con artist isn't so much ripping off the other guy as teaching him a lesson.

A lot of "Nine Queens" is just about the ride of the movie, much like "The Usual Suspects" or David Mamet's "The House of Games" (a darker, far less fun film). Part of what makes "Nine Queens" such a blast is the whip pacing. It just rushes along, daring you to keep up. But the movie also presents a nice face of Buenos Aires. The city here isn't a smoky old haunt with Tangueros hiding out under lampposts, but a modern city with a stylish subway and the grand glass-and-steel hotel where Marcos' sister works. It's here where Marcos meets up with an old partner of his, a forger who possesses a sheet of faked stamps from Weimar Germany -- the nine queens of the title.

The stamps, it turns out, could be worth a mint, but only if Marcos can get rid of them today: The only guy who would buy them is being deported the following day, and in the quick turnaround he just might miss the phony stamps' minor flaws. Marcos and Juan team up to move the loot. Of course everyone is always conning everyone else, and there's an ongoing joke where we repeatedly see a person go from rube to swindler in about two beats: Morals are loose when there's a piece of the pie sitting in front of you.

This is director Bielinsky's first feature film, but he's been working on films, commercials and television in Argentina for more than 20 years. In 1998, he wrote this script and won a contest that rewarded him with funding. It's not hard to see why: "Nine Queens" is a people pleaser that makes use of dozens of great movie tricks and manages to sprinkle great lines throughout. (One guy: "Not everyone is lucky enough to have a clean conscience." Another: "A clean what?")

Everything about the final result is just as damn competent. The film has the feel of one of those movies from the mid-'70s, when all the union hands were so good at their jobs that you could start off with a B script like "Saturday Night Fever" and end up with something resembling art. Here, the art is that of a self-contained world. If the movie isn't true, it's at least true to itself. When "Nine Queens" spirals out of the realm of believability, we've already been won over enough that we don't care.

In a way, that's part of the joke. In the end "Nine Queens" is about the difference between short cons and long ones (and, as we are informed by a great political joke that comes at the expense of the precarious Argentine economy, the biggest con of all). It's also about what's real and what's not, as well as about how easy it is to lose track of who's taking advantage of whom. Bielinsky's film also understands the difference between painful scams and painless ones. In one scene, Juan lifts a purse, but he does it just to prove he can, and promptly returns it. There's no art there. On the other hand, it's fun to watch an inspired ruse. Bielinsky is the kind of guy who drops a few dollars on a corner card sharp just because he admires the art. Sometimes it's a lot of fun to be tricked.