Fornicating in the rowboat 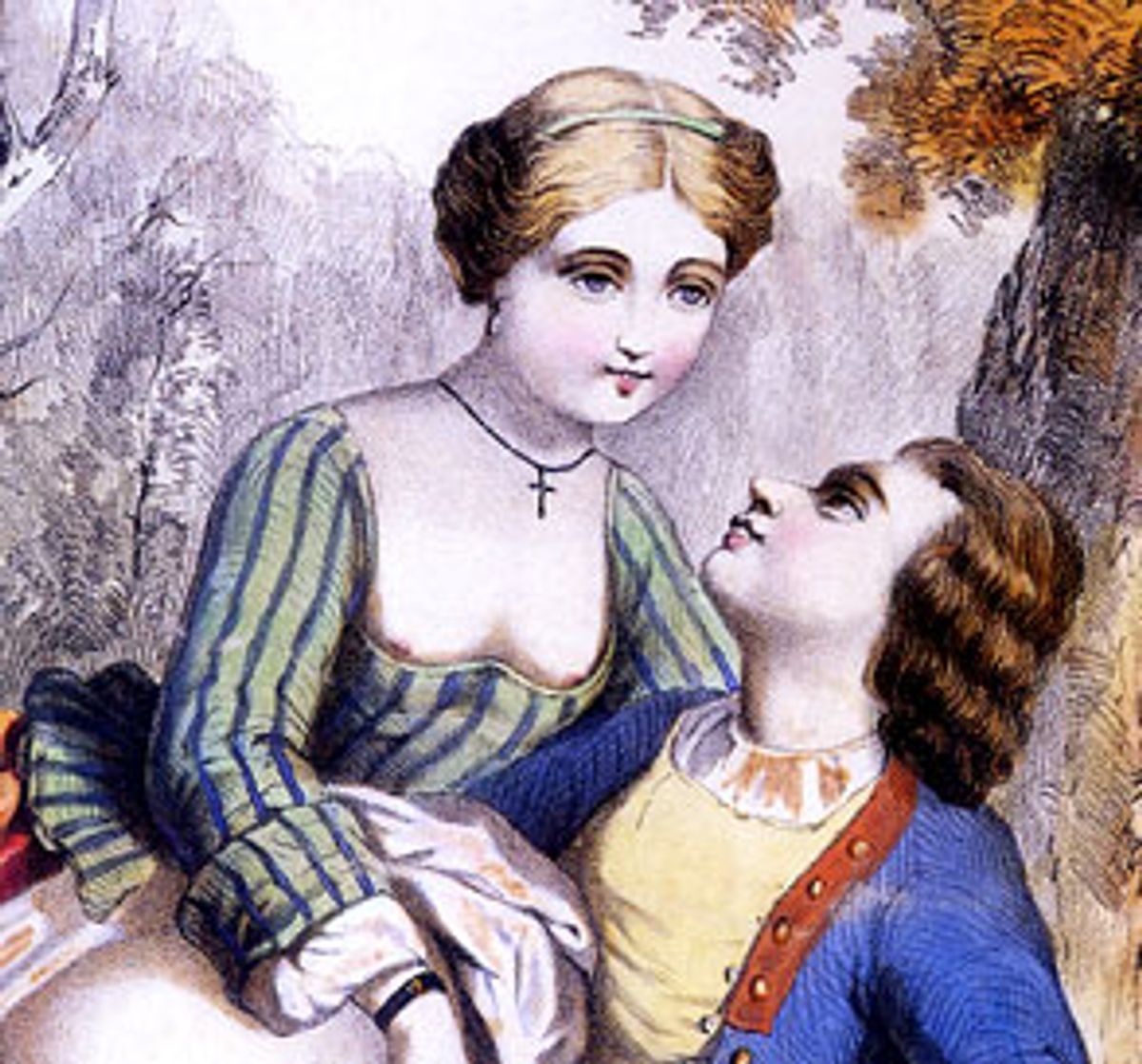 Picture a 19th century square like Jane Austen taking a secret pornographic trip to France in the early 1800s. Look over there, Jane! A fashionable lady tickles a lord's chin with one hand while jerking him off with her other. Look over there -- the count has the countess belly-down on a banquet table while Lady Somebody-or-Other flogs his bare ass with some faggots. At this same table, a gentleman is eating out a woman who stands above him guzzling a bottle of wine. O Jane, you must know this: A crease divides the cheeks of every 19th century woman's buttocks. See two ladies standing cheek to cheek, letting a robust fellow slide his pachyderm through the passageway their cracks present. Ooooh la la! See the Frenchmen and Frenchwomen fornicating in those rowboats and under the trees like squirrels.

You'll notice the happy women are never naked. They just hoist their dresses up revealing bare asses sans knickers. As for the men, they don't even bother to remove their trousers. Their dicks just poke into the night air like thick candles. Here's a final image, Jane: A lady who looks a lot like you goes out to catch some French air and spies several jolly penises dancing to fiddle music played by another robust cock.

Does this sound like some pornographic Saturday morning cartoon? What I am describing are French lithographs from the 19th century. They've been collected in a coffee-table book called "Romantique: The Erotic Art of the Early 19th Century." It was put together by a group of German professors whose ringleader is Hans-Jürgen Döpp, a 62-year-old sociology and pedagogy professor at Frankfurt am Main. The professors each contributed essays that put these lithographs in historical perspective. Most were created in France between the so-called July Revolution of 1830 and the February Revolution of 1848. The artists were a number of young male Romantics who were a little less artsy than impressionists such as Manet or Gauguin.

"Romantique," however, is not as interested in the artists as it is in the consumers of their work. These lithographs were bought by the new ruling class, called the -- ta da! -- bourgeoisie. The year 1830 was like the dot-com boom of the 1990s. "Parisian fortunes practically double in value," the book says. "In 1816, seven different securities were quoted on the Stock Exchange; in 1847, over 200!" It is a paradox that prosperity made the French middle class nervous. They worried their money was going to go as quickly as it came, so they lived for the present  drinking and dancing and collecting pornographic lithographs.

A crackpot philosopher of the time, Charles Fourier (1772-1837) is quoted in the book: "Under Harmony great abundance and an enormous diversity of pleasures will prevail. For everyone to live together in Harmony, it will be necessary for everyone to abandon themselves passionately to their desires."

Thus, all those pictures of men and women fucking in rowboats! In an e-mail interview Döpp says the lithographs represent the "dream time" of the bourgeois. He goes on to say, "The bourgeoisie has its origin as a fresh social movement, orientated according to the ideas of the French revolution: Liberté, Egalité, Fraternité. [The lithographs] have psycho-historical value. Because all these hundreds of pictures look alike, we can say that they show a collective daydream of this time. They were more free than in [the 18th century], because the bourgeois did not believe in the Catholic threat of sin and hell. They had a consciousness of lust -- lust that was more than an animalistic drive. More cultivated."

Come to think of it, don't Döpp's bourgeois sound like the spiritual predecessors of the dot-com crew of the early '90s who flourished before the bust? The lithographs themselves resemble Web site sex imagery.

"These lithographs were not very expansive, so everybody could buy them," Döpp reports. "They were sold openly  in the 'Palais Royal,' in bookshops, and at street corners. To collect this stuff was not a stigma like collecting pornography today." Later, he muses that "pornography" means "the tear in the soul  the soul is split  to say it with Freud  into the conscious and the unconscious part. In these lithographs human desire is laid open to be seen."

When Döpp is asked to comment on the fact that all the hurried sexual participants in the lithographs are still wearing clothes, he writes (rather unconvincingly): "It was easier to have sexual contact than today." Then he closes his comments with a complaint about modern women wearing pantyhose.

An interesting aspect of these lithographs concerns the artists' children. "We know situations when the artist's family, including the children, colored all the prints," Döpp explains. "The world was not so strictly divided between grown-ups and minors. And sexuality was only a fact of life." Later, he remarks, "No, these pictures were not 'devil's work'! And the current image of children as innocent angels is a puritanical relapse [that comes from] Sigmund Freud. In the beginning of the 19th century, Rousseau's idea of the 'innocence of children' was a very new idea, as you see in the education books of this time."

If the bourgeois would later invent "childhood," they invented sexuality with these lithographs. Or so says the book: "The transformation of countless desires, sensations and ideas into a single sexual form, which was apparently intended by god just as much as nature, can be most easily gauged from the fact that in the place of the countless words which were in circulation before the nineteenth century, a single word [now] appeared, a collective word in the singular which consumed all of its predecessors from Venus to Nisus: sexualité/Sexualität/sexuality."

"'Sexuality' as a science, a 'concept,' did not exist," Döpp argues. "Before 1800, one knew the problem of the human soul, of human sinful drives. But nowhere was the specialized word 'sexuality.' (The first notation of this word was about the 'sexuality of plants'!) [Before the 19th century,] sexuality was not seen as a special section of human behavior. One spoke about the dramatics of love and pain, the drama of characters, but not about the 'sexual character.'"

The book also claims that the root of sex is capitalism: "The social form of sex, that is to say our sexuality, is a product of capitalism. It could only come into existence because people's most pressing need was no longer predominately that of food, and because all human abilities were simultaneously isolated and socialized as such by turning them into fetishes."

That said, you'd think the great Yankee robber barons would have been hoarding these French lithographs, but Döpp says they never caught on in America. "Maybe a few emigrants to the 'free country' brought some in their luggage to New York, but collectors never found such material on the American market."

Döpp is one of the foremost collectors of this pornography in the world. It must be stated that he detests the P-word: "To make a difference between art and pornography is not a question of artistic skill but of morality. In the deepest ground it is hypocrisy [for] the public to adore 'high art' and privately to collect 'pornography.'"

We assume he means a 19th century lithograph costs about as much as some Christian Louboutins. "Today sexuality is following social rules," Döpp says. "We think to be 'spontaneous' and 'free,' [but I believe we have] lost all spontaneous feeling! Maybe this is good because the sex drive sometimes can be very anarchistic. 'Polymorph-perverse,' as Freud said." Later Döpp adds, "And today? We see our sexuality in the daylight. To have sex belongs to the healthy way of life. We are enlightened. Sex without secret. Maybe it's less exciting today, and more sportive."

"Romantique" refers to the present as the "neosexual revolution." "Whereas the old sexuality became mystified in a positive way as ecstasy and transgression, the new one is negatively mystified as inequality of the sexes, as violence, abuse and fatal infection." In this light, "Romantique" is a celebration of the long ago day when bourgeois penises danced to fiddle music and women were ready lift up their hoop skirts and allow themselves to be entered at the slightest provocation.