Hey, remember the mid-'90s, when every young filmmaker wanted to make pulpy, pop-culture-driven, Tarantino-style black comedies? Nope, me neither. 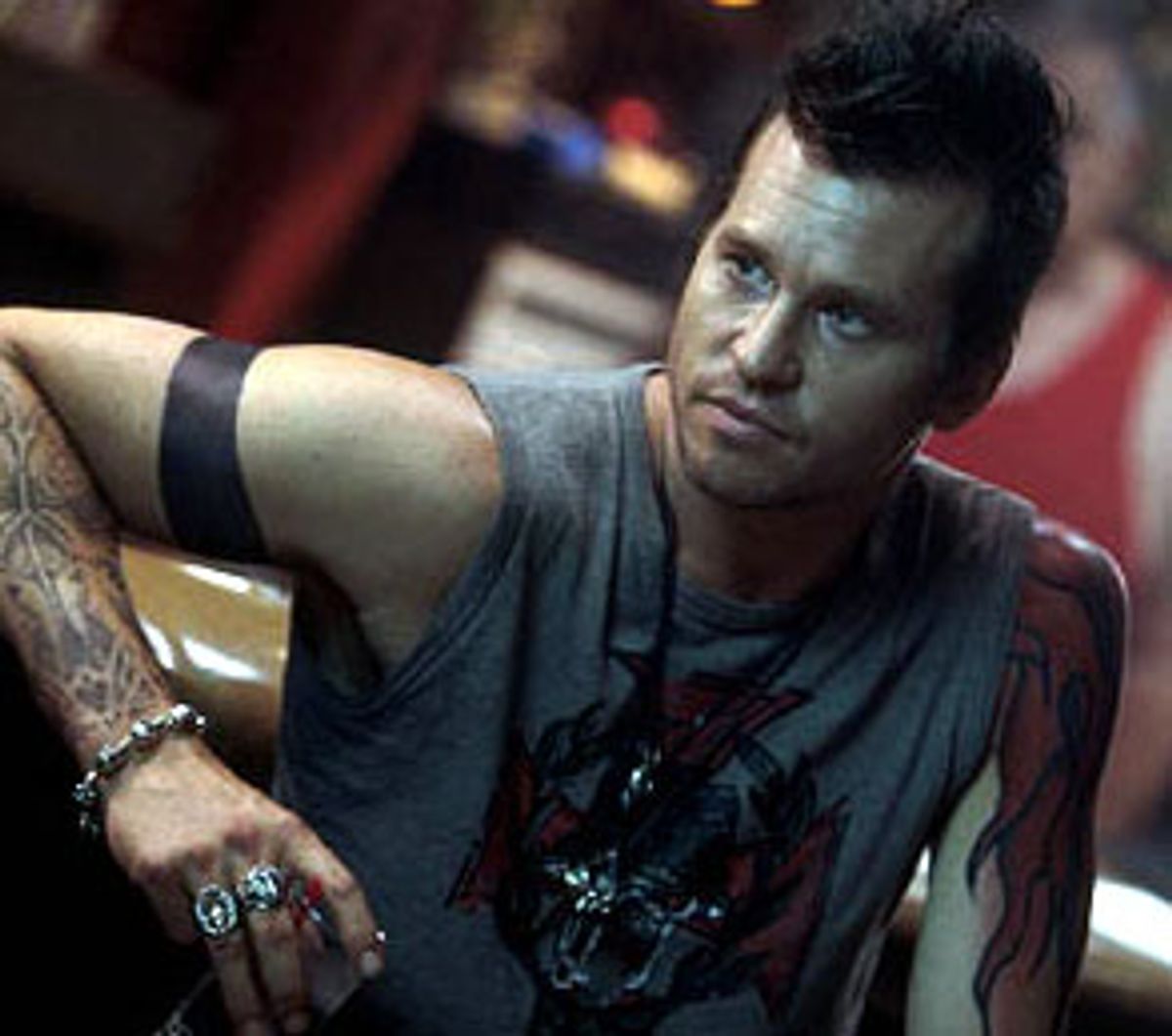 There isn't a single original or involving moment in "The Salton Sea." From the opening shot -- a lonely, film-noir trumpet playing over the doomed hero's voice-over narration -- you know you've seen this before. And more recently than you think.

"The Salton Sea" is an artifact of those not-so-long-ago days when every young American filmmaker wanted to be Quentin Tarantino. Which is to say it's a fifth-rate mix of pulp conventions, black-humored irrelevancy, grotesquerie, pop culture references, celebrities with cachet (Shalom Harlow as a speed freak appearing for the movie's chic side; Meat Loaf standing for its ironic kitsch) and cool, detached violence. It's not about the story or the emotions; it's about attitude. It's a movie for people whose idea of a film classic is "True Romance."

Val Kilmer plays Danny Parker, speed freak and (unbeknownst to his crankhead friends) sometime police informant. Or is he Tom Van Allen, an ex-jazz musician traumatized by the death of his wife in a drug incident near the eponymous dead sea in Southern California? Or is he Rufus Leaking, emotionally shellshocked manual laborer recovering from a devastating shingling incident? Or is he Boston's Cardinal Bernard Law, contemplating making his film debut in an indie comedy about his travails with pederast priests called "My Big Fat Greek Archdiocese"?

None of those identities seems any more ridiculous than the tortured jazz musician turned drug fiend-cum-police rat the movie gives us. (One who, by the way, has evidently spent time at the "Memento" House of Body Decoration.) "The Salton Sea" is Danny/Tom's story of avenging his wife's death. It's meant to keep you guessing as to identities and motives. (Just how far has he descended into crankhead culture?) It has double- and triple-crosses and is baked in a druggy version of romantic fatalism. Which is to say that everything in it is presented to us in italics. Nothing is really at stake, save, that is, for everyone involved appearing hip and crazy and freaked out.

As is usual for post-Tarantino noir, or whatever label you want to put on the whole sorry subgenre, "The Salton Sea" has been filled with offbeat, uh, characters. But since they're no more than conceits, there's no way for the cast to play them except as exhibits at the Scum of the Earth Petting Zoo.

It's to be expected that Kilmer and Deborah Kara Unger are as phony as always. The only shocking thing about "The Salton Sea" is that it brings good actors like Vincent D'Onofrio, Glenn Plummer, Luis Guzmán and Anthony LaPaglia down to their level. (And in the case of Plummer and Guzmán, strafes their talents with parts that are gross racial stereotypes.) Peter Sarsgaard has a few spacey/affecting moments as Kilmer's sidekick, and an actress named Chandra West, who plays Kilmer's late wife in the flashbacks, puts the movie's showiness to shame with the quiet, unfussy acting she does in her death scene.

More typical is the conception of D'Onofrio's character, a crank dealer named Pooh Bear who has had his nose sliced off due to excessive speed use and wears a plastic one in its stead. That allows D'Onofrio to do a strange whistling sound when he's not taking his high-pitched accent around the block for a test drive. The flamboyance of D'Onofrio's hillbilly hellhound is attributable to the script; there's really no other choice an actor could have made. That doesn't mean it's a good performance. How can you be good when your character exists solely to serve as the cinematic equivalent of street cred for your director (D.J. Caruso -- let's hope that D.J. aren't just initials and that the guy has alternate employment) and the writer (Tony Gayton)?

This is a movie whose idea of "edgy" comedy is to show us an old man in a wheelchair doing "Walk on the Wild Side" in a karaoke bar. Or to show us Pooh Bear restaging the Kennedy assassination with pigeons duct-taped into a motorized miniature convertible. (I swear to God, I'm not making this up.) Its idea of "pushing the envelope" is to have Kilmer's member shoved into one end of a box while at the other end, a starved badger scrambles to get to this new and tempting lunch meat.

For all the admiration that hip young filmmakers and novelists have expressed for pulp figures like Jim Thompson or filmmakers like Samuel Fuller, there is, in their work, the fatal whiff of tourism. Not that men like Thompson and Fuller weren't indulging in their own tough-guy fantasies. But there was no fuss in what they did. "The Salton Sea" is a prime example of pulp as art project. The critic (and former Salon editor) Craig Seligman once said that if a Merchant-Ivory movie ever had to show us dog shit, it would be the most picturesque dog shit imaginable. That's Caruso's approach to lowlife. A shot may show us a crank pad with people crashed out on the floor, or a meth lab stuffed into a trailer. But the squalor, the shag carpeting and imitation wood paneling has all been carefully selected and photographed.

That approach is really why, boring and pointless as it is, "The Salton Sea" isn't unpleasant, even when we see a man sprawled on the sidewalk with blood pouring from his head. To say that the film is unpleasant would imply that there's an emotional reaction to be gotten from it. Which is why I have refrained from revealing any hint of the movie's so-called plot twists. Not just because I'm performing a courtesy to readers, but because to do it I'd have to believe that there was someone, somewhere, who would actually care.