How angry are the Saudis?

After leaked threats to "use the oil weapon" and blunt talk at a Texas summit, a Mideast expert helps untangle diplomatic appearance and reality. 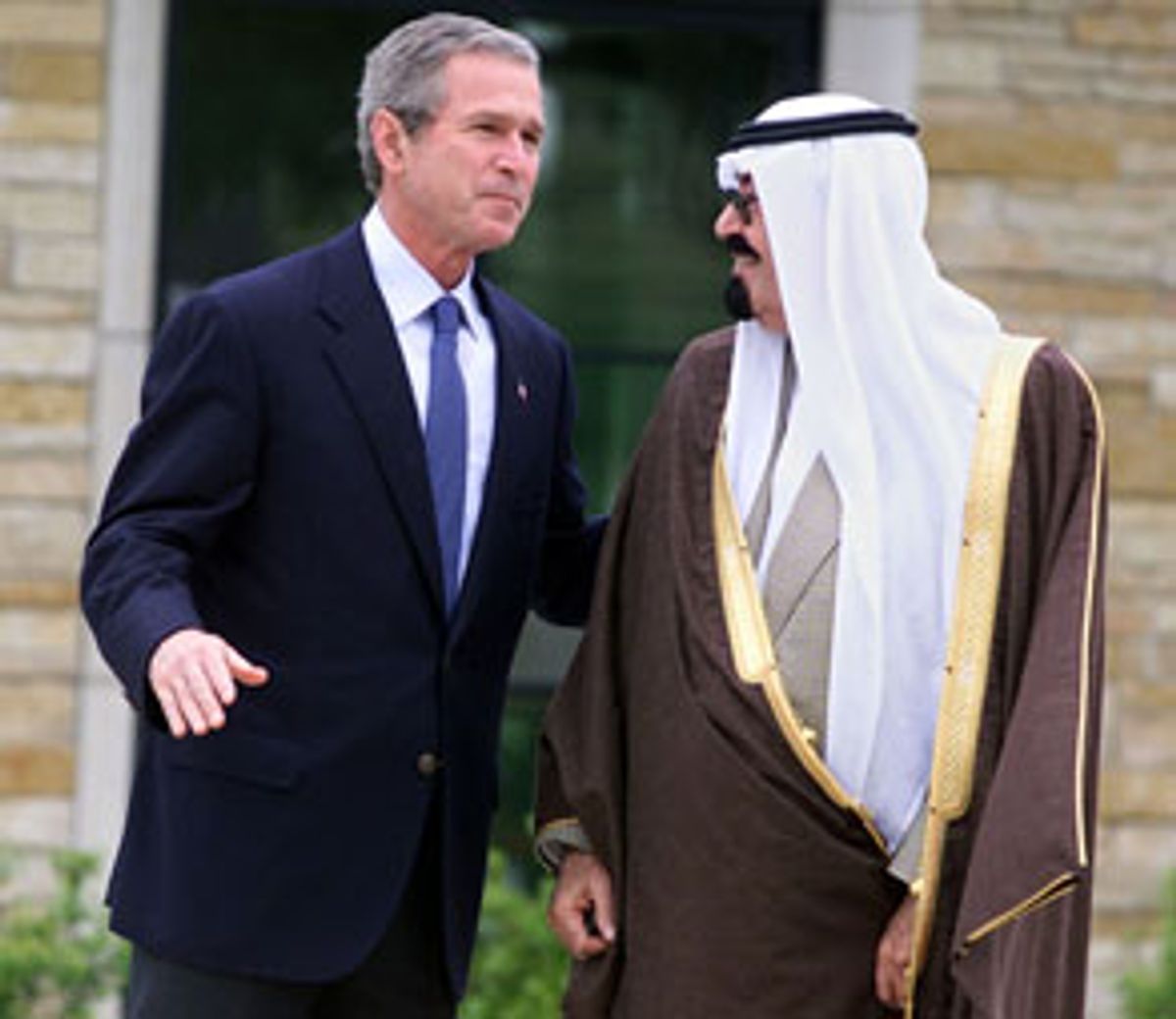 404474 02: U.S. President George W. Bush (L) and Saudi Crown Prince Abdullah stand in front of Bush's home before a meeting April 25, 2002 in Crawford, TX. The leaders are seeking a solution to the Israeli-Palestinian conflict that is fueling growing tensions between the Arab world and the U.S. (Photo by Rod Aydelotte-Pool/Getty Images) (Getty Images)
--

Thursday's meeting between President Bush and Crown Prince Abdullah of Saudi Arabia carried an air of animosity -- bordering on brinkmanship -- thanks to some royal messages that were carefully leaked Wednesday to the New York Times. Quoting a source close to the crown prince, the paper reported "there was talk within the Saudi royal family and in Arab capitals of using the 'oil weapon' against the United States, and demanding that the United States leave strategic military bases in the region."

Unhappy with what they perceive as the United States' siding with Israel in the current Middle East crisis, and also disappointed with the minimal reaction to their recently unveiled peace plan, the Saudi royal leaders are frustrated.

The Saudi source angrily complained to the Times, "It is a mistake to think that our people will not do what is necessary to survive. And if that means we move to the right of bin Laden, so be it; to the left of Qaddafi, so be it; or fly to Baghdad and embrace Saddam like a brother, so be it. It's damned lonely in our part of the world, and we can no longer defend our [U.S.] relationship to our people."

Are the Saudis and the U.S. on a collision course? In order to dissect the posturing, Salon spoke to William Quandt, professor of government and foreign affairs at the University of Virginia and a former National Security Council staffer during the Carter administration. Quandt's books include "Peace Process: American Diplomacy and the Arab-Israeli Conflict Since 1967" and "Decade of Decisions: American Foreign Policy Toward the Arab-Israeli Conflict, 1967-1976."

Did those comments in the Times strike you as unusual?

Yeah, but I thought it was a little bit of a gimmick, too. I can guess who probably the source was. It sounded very much like [the longtime Saudi ambassador to Washington, Prince] Bandar or somebody like that, somebody very Americanized. I understand why they're doing it.

They know that when Abdullah and Bush met, that the older generation of Saudis tend to be very polite and indirect. And when they're really, really mad they express it in ways that we don't always pick up on. So I think what Bandar, or whoever leaked this, had in mind was, "We've got to get the Americans conditioned to understand that they're going to hear from Abdullah. He's going to say we're concerned, we would expect more from our friend. And Americans are going to say, 'Oh, he's a soft touch.' And somebody has to say out loud how angry we are. In any case if we make it sound really, really angry, that we need a lot of calming down and appeasing, we can have a better chance of controlling the agenda, which is talking about Israel and Palestine, and not having Bush lean too hard on us about Iraq, which we really don't want to talk about."

So you don't think Abdullah actually expressed those harsh sentiments in his meeting with Bush?

I'd be absolutely surprised if he did. Now, I don't even know if he thinks them in his deepest, most private moments. I think he's probably very annoyed and very worried. And, frankly, any sensible person ought to be. These are dangerous times in the Middle East. But I think it would be very uncharacteristic of any Saudi leader to throw caution to the wind and say, "Go screw yourself, there's no basis for the [U.S/Saudi] relationship anymore." It's not going to happen. I don't think they want the relationship to go down the drain. I think they're worried this president is kind of taking them for granted.

How significant is it that it's the Saudis who introduced a peace plan, and it's the Saudis coming to America trying to represent the voice not just of their country but of the entire region? Is that a new and different role? Or is that something they do periodically?

The closest they've come in the past is the so called Fahd plan of 1982. After a big crisis, the Israeli invasion of Lebanon, the Saudis rather cautiously laid out some points that became markers for Arab consensus, and then didn't do much to campaign on them. The fact that they didn't really follow up on it -- theirs wasn't a strategy, it was just symbolic -- is fairly typical of the Saudis.

Why are they taking the lead now?

They have a new leader who's a little bit more straightforward and has a little bit more self-confidence. And I think he also realizes if he doesn't take the lead on the Arab side, who will? [Syrian President Bashar] Assad? No way. The young upstart kings, who will embarrass the Saudis by being more dynamic and more out front? There's a certain amount of Saudi pride involved. And I think some of this was to divert attention from Iraq, and from these kind of cascading demands that the Saudis have to fix their educational system and weed out terrorists. It was a way to give us something else to talk about.

What about playing the oil card? What's the significance of even bringing that up publicly?

But anonymously doesn't count. They did it publicly in '73 and we didn't take it seriously. That time they meant it.

You don't think they mean it this time?

No. Not for what's going on now.

Does the Saudi reaction indicate that they thought the Powell trip was a failure?

Yes, they do think it was a failure, a weak simulation of the real thing. They want to see somebody like [former Secretary of State James] Baker come out and really twist some arms. They don't want to see Powell come out and get jerked around from one side to the other.

Are Saudis disappointed with the administration in general?

I think there's a sense that they made their [peace plan] gesture and there wasn't enough of an American response. I think the Saudis would have expected somebody to say, "Good first step, we're going to praise you for it."

Without really pushing the Saudis very hard, we could say to them, this concept of normalization means a lot to the Israelis. If you could start acting on it, just invite some Israeli intellectuals to a conference in Saudi Arabia. It's never been done. Just demonstrate you're prepared -- take some lessons from Ping-Pong diplomacy to start showing that Israelis are no longer off limits in the kingdom. Israelis would be the first ones to come. That's what I think Bush would like to see, and then offer an implicit deal: Follow through on yours and we'll really work with you on this. The other part of that conversation would have to be [the U.S. saying] we understand that going after Iraq right now would screw this all up. We won't, we'll settle that account later. But we understand your priority and our priority are now to get the Israelis and Palestinians back on track.

In terms of Iraq, is that the Saudis' strongest hand right now?

The Saudis could say to us, we share your final goal about Saddam, but we cannot support doing it in present circumstances. But if we could jointly tackle this Israeli/Palestinian [situation], even if it takes a couple years to get it moving in the right direction, we will be there when you need us on Iraq. I don't know if that kind of frankness of discussion can take place, but it would be tempting.

Could the Saudis make it almost impossible to move against Iraq?

If we can't use Saudi facilities and they politically oppose it, it really becomes more difficult.

What do the Saudis want to return home with and be able to tell the Arab world?

That they got a commitment from the Americans to pressure Sharon to get out of the Palestinian territories. Re-engagement and active American diplomacy to promote a real presumption of peace talks and support for the broad outlines of the Saudi initiative. That is, you know, a land-for-peace kind of initiative. And wink, wink, no pressure to immediately do anything about Iraq.

And what about the Bush administration?

They'd like to see the Saudis reiterate their willingness to normalize relations with Israelis and play a leadership role on that. To take a position against suicide bombers as acting contrary to Islam, de-legitimize that kind of action, and use whatever persuasion they may have with the Palestinians to get them to back away from that tactic. And at least some kind of verbal confirmation of the continued sanctions against Iraq.

Where do you think the U.S.-Saudi relationship stands today?

Well, it's under a lot more strain than it's been in many years. But I don't think it's at a point of rupture.