"The Long Boom" is back!

Recession? What recession? A coauthor of 1999's infamously optimistic screed says the future is still bright. 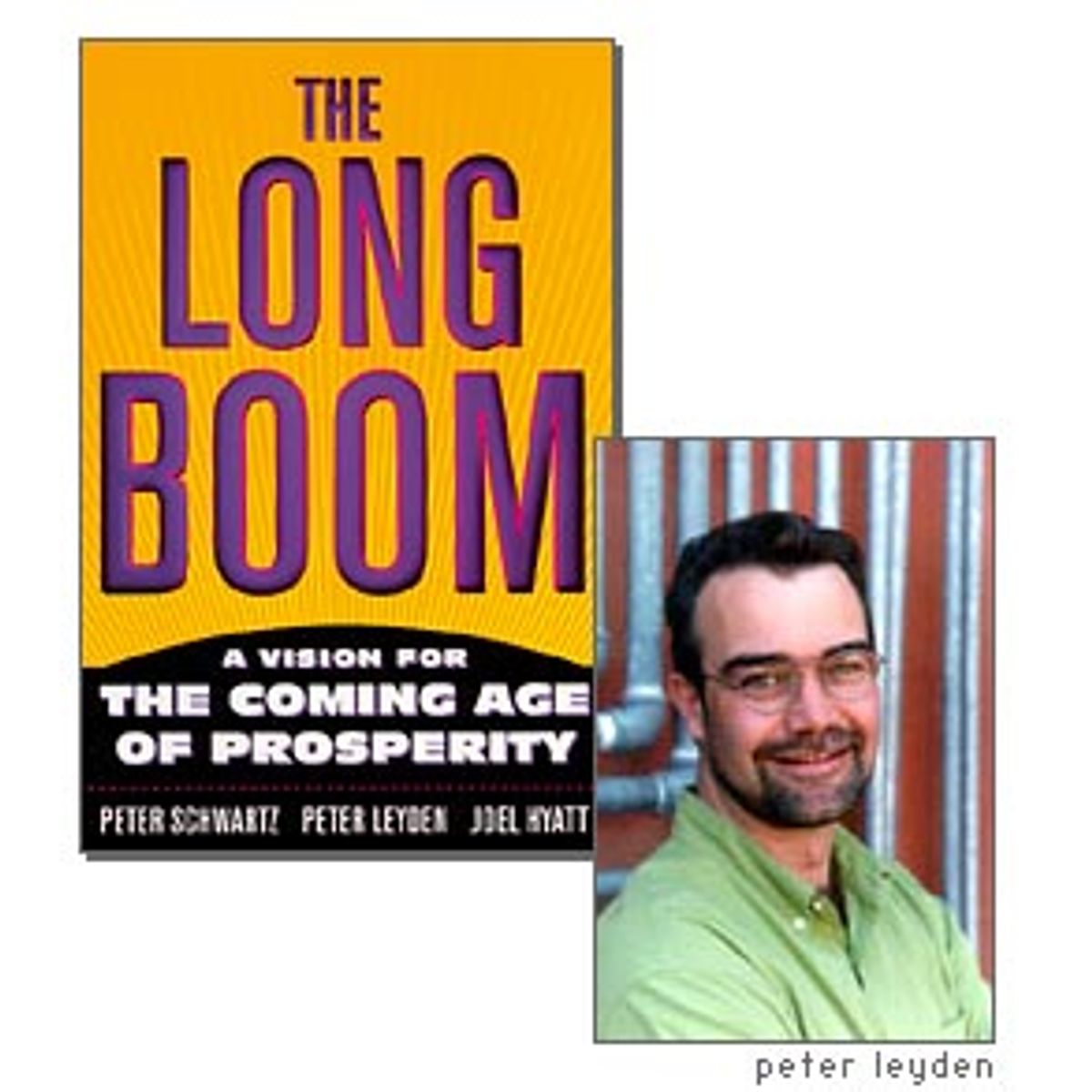 Rereading, at the late date of 2002, "The Long Boom: A Vision for the Coming Age of Prosperity" is the intellectual equivalent of dosing on nitrous oxide, guaranteed to bring on giddy nostalgia for late-'90s techno-optimism.

First published as a cover story in Wired magazine in 1997, then as a book in 1999, "The Long Boom" declared that technological progress would bring about two more decades of economic expansion and ameliorate, if not eliminate, such vexing bothers as cancer, poverty and global warming. It epitomized the Left Coast, future-eating techno-idealism that helped fuel Internet mania.

Ah, for the late '90s, when getting wired meant that our lives could only get longer, happier, healthier and richer as we all got linked up in history's first truly global society.

But in the early 2000s, such cockeyed optimism has become about as popular as a Taliban T-shirt in a JFK gift shop. As a consequence, "The Long Boom" suffered its own market correction, dismissed as just one more spatter of froth from the dot-com bubble.

But suddenly, doomsaying about the state of the economy is also ringing false. The U.S. economy grew 5.8 percent in the first quarter of 2002. Few economists are ready to declare that boom times are back -- layoffs are continuing at major corporations, and profits are still in short supply -- but the recent recession is being labeled one of the mildest on record, just as the authors of "The Long Boom" predicted. Is it time for the techno-optimists to do their own gloating in a chorus of merry I-told-you-sos?

Peter Leyden was a coauthor of the original "Long Boom" manifesto as well as of a forthcoming book, "What's Next? Exploring the New Terrain for Business," to be published by Perseus in September. He's a "knowledge developer" -- note the late-'90s job title -- for the Global Business Network think tank.

From his office in Emeryville, Calif., he talked about how the long boom survived the dot-com implosion and the terrorist attacks of Sept. 11, and why the new economy is alive and may soon even be well.

How do you evaluate the recession that we appear to be emerging from? Has it really just been a blip on a larger growth path?

It's been an extremely shallow recession.

People often think of the '50s and '60s as the great golden age of the American economy. Everybody's boats were floating on the rising tide of economic expansion as we built up the suburbs. But they forget that in fact the postwar boom, which went on for about 25 or 30 years, was just punctuated constantly by recessions. It had six clear recessions -- in fact much more dramatic recessions than we've experienced in the last 20 years.

When the economy slows, let alone goes into a recession, that does not negate the larger context of a vast economic expansion.

Many observers have suggested that the current recovery is fragile, however. There continue to be announcements of huge job cuts at companies like Lucent, and the stock market's performance has been tepid. The market is not synonymous with the economy, obviously, but isn't it symptomatic of something?

No, it's not. It's going to be confusing for a while, and that's a sign of the confusion.

If you look again at how we came out of the last recession of the early '90s, there's an amazing amount of parallels here. That recession technically ended in 1991, but it took all the way into the mid-'90s until there was a sense that the economy was going to start really moving in a sustained way.

The more recent recession was not driven by a plunge in consumer spending. If there is any dramatic pickup out of a recession, it's usually led by resumed consumer spending at high rates. This recession was driven more by business cutting off its spending because it had overbuilt its capacity and inventories were built out; so this is more of a business-led recession. So you're not going to see the dramatic pullout that people want to think happens out of recessions.

As for big companies doing layoffs now, it's the small entrepreneurial companies that actually hire quickest. It's these big lumbering giant corporations, like Lucent, that are behind the curve, that are still essentially playing out their recession scenarios and recession strategies after the boom has already started.

We're watching a lot of the fundamentals picking up again, and meanwhile the conventional wisdom is still caught in the doom and gloom.

"The Long Boom" came out at the height of dot-com mania, and many saw it as another piece fueling the speculative bubble. When that bubble popped, much of what had happened looked like a scam. How do you separate "The Long Boom" from that bubble?

The "long boom" to us meant a fundamental economic boom of sustained growth at high rates in both the American economy and the global economy. How the stock markets fared was simply a symptom of the more fundamental boom.

Every single transformative technology, like the telephone and railroads, has been accompanied by a frenzied stock market. But once you get through the frenzy, once the valuations crash, once there's a shakeout of the companies, once you get the kind of consolidation amongst the really viable companies that can stay there for the long haul, then you've got the core infrastructure of a new technology that anyone can leverage.

And there's no doubt that the Internet, telecommunications and computer technologies, taken together, are a transformative technology -- and that is the thing that is driving and will continue to drive the growth of the overall economy.

So even with the tech sector still quite depressed, you continue to position technology as the great engine of economic expansion?

There was this glimpse in the late '90s of what was going to happen relatively overnight, where everyone thought that it would happen in two or three years, and essentially everyone was overstimulated in terms of how quickly it could happen. It's just going to take longer than most people thought.

When you look back at history, people will say: "Oh yeah, there was a stock run-up," and "Oh yeah, there was a burst bubble." But they're also going to see it as a transition, as a confusing kind of chaotic time that was part and parcel of the ultimate build-out of this information infrastructure that became the foundation of the global economy in the early part of the 21st century. We kind of lose track of it now because we're still caught in the confusing transition.

But people are starting to say: "Gosh, why was the recession so shallow? Why was our economy able to absorb an enormous hit to it with the 9/11 attack?" Global business went into a total freeze that lasted for weeks. An enormous shock to the system happened in September, and despite all the trauma, and despite all the emotionality that we all had, the economy was able to absorb that kind of shock and was able to in fact continue on a pretty robust pace and get us back on this trajectory.

This is an example of the robustness of this economy that should not be underestimated. I think we're actually out of the period where everyone was wringing their hands and looking at all the negatives and basically doom-saying.

But couldn't the ongoing threat of terrorism derail this economic expansion?

The Sept. 11 terrorist attack was the closest thing to jeopardizing the long boom.

The key issue in the next 10 years is whether we can avoid a weapon of mass destruction going off on U.S. soil. If a suitcase nuke or a rogue nuke goes off in the downtown of a major U.S. city, that could be a shock to the psyche of the American people in a way that would make 9/11 just a small beginning.

That is a very real possibility. In fact, one of the guys who we interviewed for our next book, John Arquilla, from the Monterey Naval Academy, put the odds at 1 in 4 that we're going to see, in the next decade, one of these weapons of mass destruction going off. And he's part of the security establishment that's desperately putting that on the front of the agenda of what they need to stop.

The idea of the "new economy" became a whipping boy for the stock market bust. Do you still believe in the new economy? And would you define it the same way now that you did three years ago?

I fell prey to this as much as anybody. There was the real sense of throwing out the old -- the old economy didn't get it; the new economy got it. The older generation didn't get it; the younger generation gets it. That kind of hubris, looking back on it, was really ridiculous and really misplaced. Now, that being said, there is something really new happening here.

A networked economy does work very differently, an economy based on this information infrastructure, this computer network, opens up possibilities that are very different from the old economy. I think that's true, and it's still true, and it's going to be increasingly true.

A lot of these things that we talked about in the '90s -- "Oh, everybody's moving to the Internet!" -- in fact weren't the case. It's taking a long time, and that's going to happen over this decade.

Are you still optimistic about some of the more rosy predictions your book made -- like finding a cure for cancer?

I do think that we're going to cure cancer.

While everyone was wringing their hands about the collapse of the dot-coms, biology, life sciences and energy technology have just gone gangbusters.

There's been incredible growth in fuel-cell technology, to the point where it's almost becoming conventional wisdom, even among the auto companies, that the shift to a fuel cell will happen. A couple of years ago people were thinking it was science fiction that you could stimulate stem cells to grow organs and replacement tissues, and now it's considered something that's going to happen in the next 10 years.

There is room for optimism in these other fields, and I do feel -- if not as giddy as I might have been in the peak moments of the late '90s -- I really feel that there is plenty here to be looking forward to in the coming decade.