The authors of "Going Down" talk about the gag reflex and whether a man's mouth is different from a woman's. 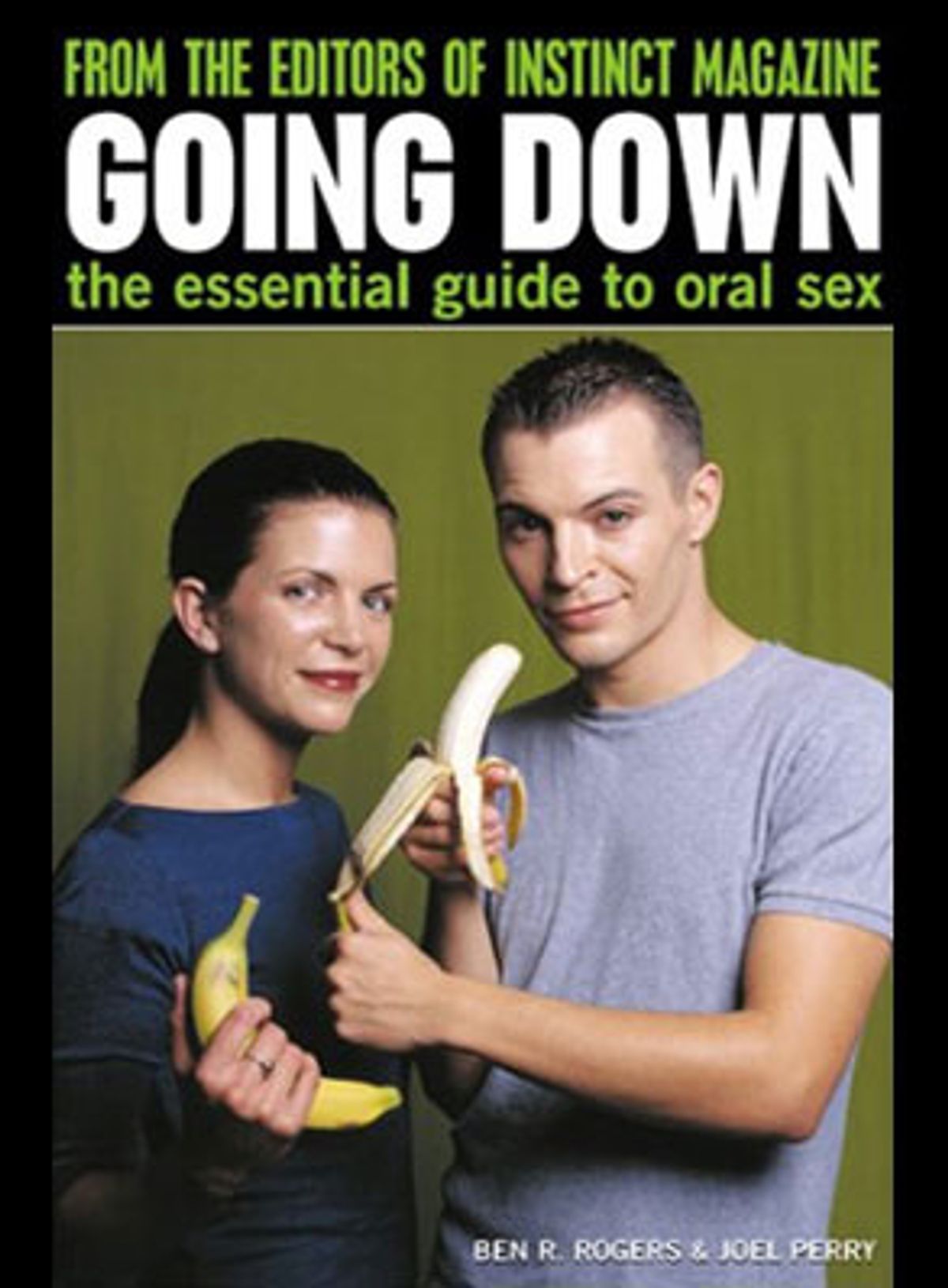 A passage in "Going Down: The Instinct Guide to Oral Sex" suggests that in the middle of performing fellatio, the sucker stop what he or she is doing and "blow cold air" on the fellow's penis. "The sudden chill is such a different sensation that it helps break up the chain of events leading to shooting sperm." I don't know about this suggestion. Why not start whistling at the thing, à la Lauren Bacall, instead? ("You know how to whistle, don't you, Steve? You just put your lips together and blow.") That, after all, would be an honest-to-goodness blow job.

You're sure this book is intended for both genders?

Ben: [a puppy voice] Yes. And everything in between.

Joel: [a dry voice] For anyone who wants to put a penis in their mouth.

Do either of you have the experience of a woman putting your penis in her mouth?

Is it different than a man?

Ben: No. A mouth is a mouth. With gay men there is more of an attraction. They're more into it. I've noticed with a lot of girls, they think that it's something that they have to do. And with men it's more like something they want to do.

Physically, are women's mouths and tongues the same size and space as a man's?

Joel: We did a lot of penis research but we didn't go out and measure any mouths. That's for "Going Down, Part 2: The Receivers." From my experience, there probably isn't much of a difference. I'm sure you know men with small mouths and women with big ones.

I certainly know the latter. [My friend the Harvard doctor informs me that forensics indicates women's jaws are in fact smaller than men's.] Proportionally how much oral sex is done with condoms?

Joel: We mention in the book the question of whether HIV can be transferred through semen. The answer depends on what doctor you talk to.

In terms of modern sexual aesthetics, is this the assumption: "If you're going to put a penis in your mouth, expect ejaculation"?

Ben: I think we go to pains to point out that that's up to the people involved. Some things occur physically with the man when he's going to come  for example, the testicles go up closer to the body. We make a point that you have the choice whether you're going to have the man come in your mouth or not by paying attention to these signals. And hopefully discussing it prior: like, "Sweetheart, I love you, but I'd really rather you not come in my mouth tonight." And hopefully the person who's getting the blow job is polite enough to say, [in mock British accent] "Excuse me, but I am about to ejaculate" or something to warn the person so they can make their own decision. We're very big on making your own decisions here.

Ben: I noticed a lot with the men and women couples, that they don't communicate about it. The guy doesn't tell her what he likes so she goes down there very blind. I also figured out that [heterosexuals] just use [oral sex] as a precursor to actual fucking.

How different is it in gay sex -- is it assumed you're going to swallow it?

Proportionally in gay sex how often do couples engage in 69 as opposed to one person being the receiver?

Joel: We do recommend time and time again, reciprocation is what you ought to be doing. I was raised a good Southern boy and if anyone did me, I made sure they were done before they were through. I returned the favor. It's just polite.

In my extensive heterosexual experience I have found that women need to concentrate when you are going down on them; thus 69 is usually too complicated.

Joel: I think women are more aware of their bodies and that's why they concentrate. Men don't really think about their bodies as much.

Ben: I've had the lovely experience of just lying there enjoying it. But there are other times when I want to get a little more involved in it, and I get the signals from the person who is blowing me. I'm happy to play a scene where this person may want a little more roughness. Or a little more domination. It's just a matter of reading the other person's signals and going down that road.

Joel: Another point we make in the book is that men are more visually stimulated than women -- so we dig seeing someone on our knob. I would imagine for you as well that it's pretty hot if you look down there and you see a woman who is giving you pleasure. That has to add to your pleasure.

I just learned about "cigarette blow jobs"  where someone blows cigarette smoke over your jones. That sounds too ethereal to me.

Ben: If you think of it, someone is probably turned on by it. This is something you get used to. There are some things that shock me from time to time, but more or less I'm just like, "Ah." Like the old saying "Different strokes for different folks"  no pun intended.

Joel: That's a point we make in the book. If you hear about something, give it a shot. Try it out. You never know if you will like the mango-nut-berry ice cream if you just stick with vanilla.

Ben, so when was the last time you were shocked?

Ben: This girl I was out with last night -- we were telling her about the blow job book. She asked me what the three top things for blow jobs are, and I said, "If you want to delay him coming, pull his balls." I told her something else. And then I said, "More and more straight guys are finding that getting fingered [up the anus] intensifies the orgasm." And this girl started wigging out and told me how she got her whole fist up into her boyfriend. That is insane. I was just kind of shocked. [Pause.] Maybe it was just the beer.

Ben: I'm not interested. You'd think gay guys are the more extreme exploratory people and here is this girl who seemed very sweet and innocent.

Ben: That's bad. That's like giving a blow job just to be polite.

I've never put a penis in my mouth, and before I spoke to you I went into the kitchen and used a blunted carrot to practice some of the things in the book. Putting a penis in one's mouth is much more difficult than I would have thought. You talk about "deep throat" -- my gag reflect starts way before deep throat.

Ben: That's why you have to practice.

The first time you put a penis in your mouth, did it surprise you or did it make perfect sense?

Ben: I was just excited that there was one there.

Joel: I was soooo ready.

Ben: It's good, David, that you have knowledge that there is a gag reflex. That there are limitations. And you have to work up to it. A lot of people want to deep throat. One of the girls we were out with last night said she is an excellent deep throater and she loves it. She doesn't have a gag reflex. The other girl said, "I try and try. I'd love to do it, but I just can't." I said, "It takes some practice, but there are some people who just physically can't do it. It also depends on your partner's size."

Joel: I find that longer and thinner is easier -- then I'm quite avid about what I'm doing.

The mouth is an interesting thing. I'm fooling around with my mouth right now. There is the roof of my throat, and there is my epiglottis, and between the two is a lump of skin. When something touches that, I gag. Forget reaching my epiglottis. Forget deep throat. "Deep mouth" would be a challenge for me.

Ben: Don't give up. Don't give up, David. Most of the nerve endings are at the end of the penis, so if you ever found yourself in that situation, you'd do just fine, I'm sure.

Joel: It's no shame if your gag reflex is too good. It's supposed to keep you from choking to death.

Ben: Can I ask you a question, David? A lot of my straight male friends wanted to figure out how to give this book to their girlfriends. Would girls be offended by getting this book from their boyfriends?

That all depends. I'm married.

Ben: Would your wife be offended by getting this book from you?

Such a book would be taken as criticism. [I don't tell them that my marriage would not be served well by a book that refers to her husband's "private Popsicle."]

Ben: It's not necessarily "You are doing something wrong," but "Are you doing enough?"