As record promoters begin spreading money around the cash-starved world of public radio, will your favorite community station begin sounding like the rest of the dial? 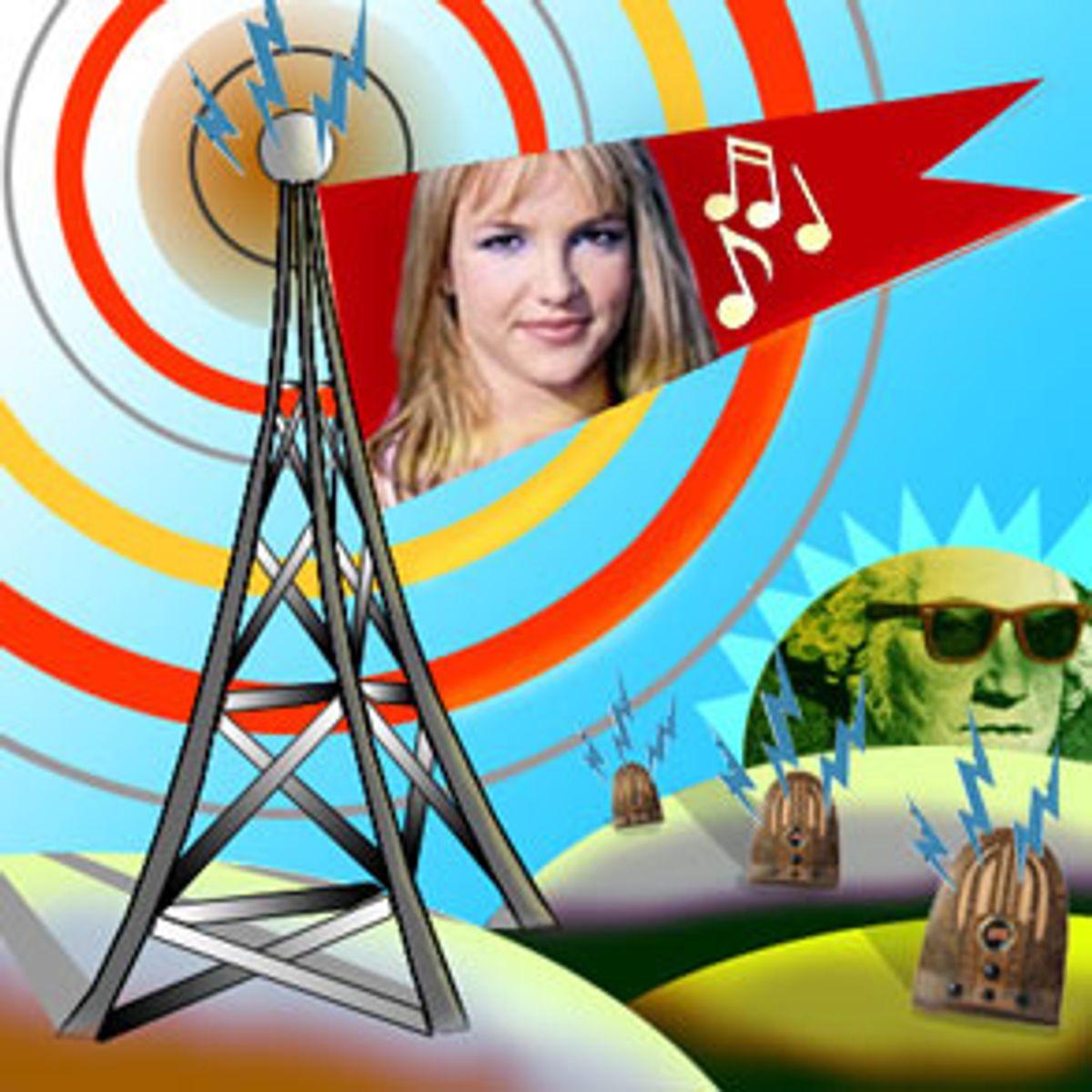 Widely considered a bastion of independence on the dial, public radio is a haven where programmers don't insult listeners' intelligence, answer to corporate bosses, or get graded by the volatile Arbitron ratings. For music fans, public stations represent radio's last surviving meritocracy; artists receive exposure because they deserve it, regardless of how little money their record companies spend on marketing and promotions. These stations are supposed to be completely resistant to the "pay-for-play" tactics that prevail at commercial radio, where playlists are sometimes put up for sale and where record labels can spend hundreds of thousands on radio promotion to try to turn one song into a hit.

Public radio is still immune to all that, right? Well, yes -- National Public Radio affiliates are not in any immediate danger of sounding like Clear Channel stations, the commercial radio behemoth that has come to dominate the country's airwaves. But in recent years some public stations have inched their way closer to the mainstream commercial model. That's especially true of a cadre of influential progressive rock stations bucking public radio's traditional news/classical music/jazz approach. Instead, they're spinning smart rock and folk records by Ryan Adams, Dar Williams and the Josh Joplin Group to appreciative adult listeners who, thankful for an oasis from the mind-numbing easy listening and classic rock stations aimed at them on the commercial dial, are willing to pledge money each year to keep the thoughtful rock stations thriving.

"We've helped Ryan Adams, Norah Jones and Patty Griffin, artists selling significant amounts of records," boasts Bruce Warren, program director at Philadelphia's influential noncommercial station, WXPN. Noncommercial stations (or non-comms as they're known in the business) were the first to embrace the bluegrass sounds of the "O Brother, Where Art Thou?" soundtrack and helped spark an extraordinary word-of-mouth campaign back when commercial radio was snubbing the CD. The album, which beat out U2 to win this year's Grammy for album of the year, has now sold 5 million copies.

That influence has not gone unnoticed by the music industry. Last year, eight non-comms in major markets (including New York, Detroit, Pittsburgh and Kansas City) were asked to report their weekly playlists to R&R magazine's Triple A chart (album adult alternative). Record companies quickly took note because this means that non-comms' programming decisions now affect the all-important weekly airplay charts, and for labels to score an adult rock hit they need to have the noncommercial stations onboard. As a result, major labels are lavishing more time, money and attention on the public stations.

Some in public radio see the music industry's sudden interest in their stations as proof they have arrived. Non-comms are no longer seen as eccentric outposts, but rather proven, professional outlets that can build audiences and sell records. Others, though, fear this sudden wave of corporate attention will only end up tainting non-comms.

"We changed the perception of public radio, but maybe too much," says one veteran public radio disk jockey who requested anonymity. "Because a lot of the problems of the commercial radio have been imported to the noncommercial world."

Perhaps the biggest problem is the system of record promotion that is now spilling over from commercial radio to some public stations. Under this pay-for-play system, record companies are forced to pay independent promoters -- or "indies" -- to get their CDs played on radio, a practice that raises daunting obstacles for alternative record labels. "It costs a lot more money right now to promote records at non-comms and it's a damn shame," laments the head of radio promotion at a small record label. "It's changed, in that public stations won't play my records unless I pay them by hiring an indie."

Some public radio veterans fear that non-comms' recent growth in terms of listeners and fundraising pledges has come at the expense of public radio's real mission, to broaden its audience's cultural horizons. These critics charge that some public stations are aping commercial radio's middle-of-the-road approach: playing fewer independent-label artists, adopting tighter playlist controls and, perhaps most disturbing, working too closely with indie record promoters, the middlemen (and women) who have been blamed for American radio's increasingly homogenous sound.

Many indie promoters are genuine music lovers and have been credited with creating a buzz for compelling new musicians. Some have worked in a low-key fashion with non-comms for years. But in the commercial radio world, the indie system has devolved into a crude pay-for-play approach where literally every time a new song lands on an FM commercial radio playlist, the indie promoter who exclusively represents -- or "claims" --that station then sends off an invoice to the artist's record company. (Invoices vary between $800 and $3,000, depending on the market size of the radio station.) Indie promoters secure exclusivity over a station by paying radio management an annual upfront fee, usually in the low six-figure range. The system, often described as "toll collecting," where artists and labels have no choice but to pony up or risk losing crucial radio airplay, costs the record industry more than $100 million each year.

The fear now is that as public radio becomes more valuable to major record companies, some of these stations might succumb to this lucrative -- and corrupting -- pay-for-play system. According to programmers, Michele Clark, an aggressive indie who dominates the commercial Triple A format, is now trying to claim non-comms. For public stations in the largest markets, signing with an indie promoter might bring in $100,000 annually. And for no-frills non-comms that live and die on the success or failure of their annual pledge drives, money like that to market their stations is especially tempting.

Many public radio programmers vow that the tawdry pay-for-play system will never taint the left-hand, non-commercial spectrum of the dial. "There are people who will fight for independence and I hope to lead that charge," says Rita Houston, a music director at non-comm WFUV in New York. "There's no way FUV will ever go down that road. It's so against the philosophy of non-comms."

Warren at WXPN agrees: "The kinds of tactics labels and indies use with commercial stations to play records, that's not our world. Philosophically and morally, it's not the right thing for us to be doing. Part of our mission is helping artists quit their day job and become full-time artists and do it in an honest way. Artistic merit should be the basis for getting on the playlist, not a $5,000 incentive to play the record."

But already there are signs suggesting resistance may prove futile. Warren concedes that the pay-for-play practice could take hold at public radio, particularly if the dollar amounts that indies offer are increased. "Like commercial stations, non-comms have budgets and want to reach more people," he says. "I know non-comm programmers have been asked to be exclusive, and I wouldn't be surprised if it happens."

Critics complain it is already happening. "Look at Louisville, WFPK," says one small label executive, referring to an influential non-comm. "That station is completely owned and operated by Michele Clark. You can get songs played on that station, but to get [heavy rotation] you need to hire Michele."

Adds another staffer at one of the major non-comms that reports its playlist to R&R: "If Michele Clark is working a single, that's what WFPK is playing."

WFPK program director Dan Reed "vehemently disagrees" with this charge, and dismisses as "folly" the notion that record companies have to hire Clark to get their songs on his station. "She's the busiest indie out there, and she works all the good records. Just because she's working Ryan Adams, I'm not supposed to play it?"

Reed, who once worked as a record promoter for Clark, insists his station has not been claimed exclusively, receives no payments from Clark, and doubts it ever will. "I don't need to do it, and it would bring the ire of lot of people in this business."

Just last week, Bill Gruber, program director for WAPS, an R&R-reporting non-comm in Akron, Ohio, felt some of that music industry ire when he sent out an e-mail to record companies and indies informing them, "I have decided to work exclusively with Michele Clark Promotions for my independent tracking and promotion music calls."

Gruber insisted the decision was made simply as a way to save time and not have to deal with all the phone calls that come in from label reps and indies pushing their latest songs. But others see it as an early indication of an inevitable slide toward pay-for-play in public radio.

"Six months or a year from now and I'll be getting indie invoices for non-comms," predicts the head of promotion for one record label. "R&R sped up the process, but it was inevitable. The system is corrupt and whoever has the most money wins."

In other words, the major labels, the ones that can afford to hire lots of indies to manufacture a record's buzz, win.

"Non-comms are much more commercially oriented," complains one station staffer. "Two years ago you never would have found a new record by Elton John or Stevie Nicks or the Electric Light Orchestra on any self-respecting non-comm playlist." Combined, those '70s and '80s mainstays have sold nearly 100 million albums. Yet all three recently found their way onto many non-comm stations.

"Their attitude now is, 'If it's a big record we'll play it. But we don't want to play records if they're not hits,'" says another independent-label executive who also requests anonymity. "You're a fucking non-comm, you're supposed to play songs that aren't hits. Instead, they're sounding more and more like the shitty commercial station down the block."

Scott Kuchler of Koch Entertainment, an independent record company, agrees the game has recently changed. "Whether it's the influence of indies I'm not sure, but (non-comm) playlists have gotten tighter."

Shelling out more money to assure its musicians get played on public radio is not an option for companies like his, says Kuchler: "We're sort of a small label and we can't afford the luxury of hiring indies."

Will non-comms be able to resist the encroachment of pay-for-play from commercial radio, considering no other format on the dial has? Ten years ago some defiant programmers at modern rock radio stations vowed to resist the indie system in which songs were bought and sold. Five years ago the same brave rebel yells were heard at commercial Triple A stations when indies starting staking claims on their playlists.

Today though, with indies offering six-figure payments to stations, virtually every modern rock station in America is "claimed," as are the majority of commercial Triple A's.

Still, some think non-comms can prove the exception to the rule. "People have resisted because they recognize who their audience is and that's not how they want to be perceived. If listeners learned that non-comm playlists were for sale, that would be terrible news locally," says indie promoter Sean Coakley. (Unlike Clark, Coakley does not try to claim stations; he is opposed to the pay-for-play system.)

"Perhaps I'm being pollyannaish about it, but I think for the most part people will say, 'No, we're public radio, and that's not what public radio is all about,'" says Brad Paul, vice president of radio promotion at Rounder Records, home to bluegrass/country music stars Alison Krauss and Union Station.

But at least one non-comm station insider insists it's too late for wishful thinking, because the format's innocence is over. "During fund drives we make a big deal about listeners' active participation and feedback. But it's all a crock of shit because we're going to play whatever Michele Clark wants us to play."