The president's conniving in Israel's disgraceful refusal to allow the U.N. to investigate Jenin has brought the rage and contempt of the rest of the world down on both countries. 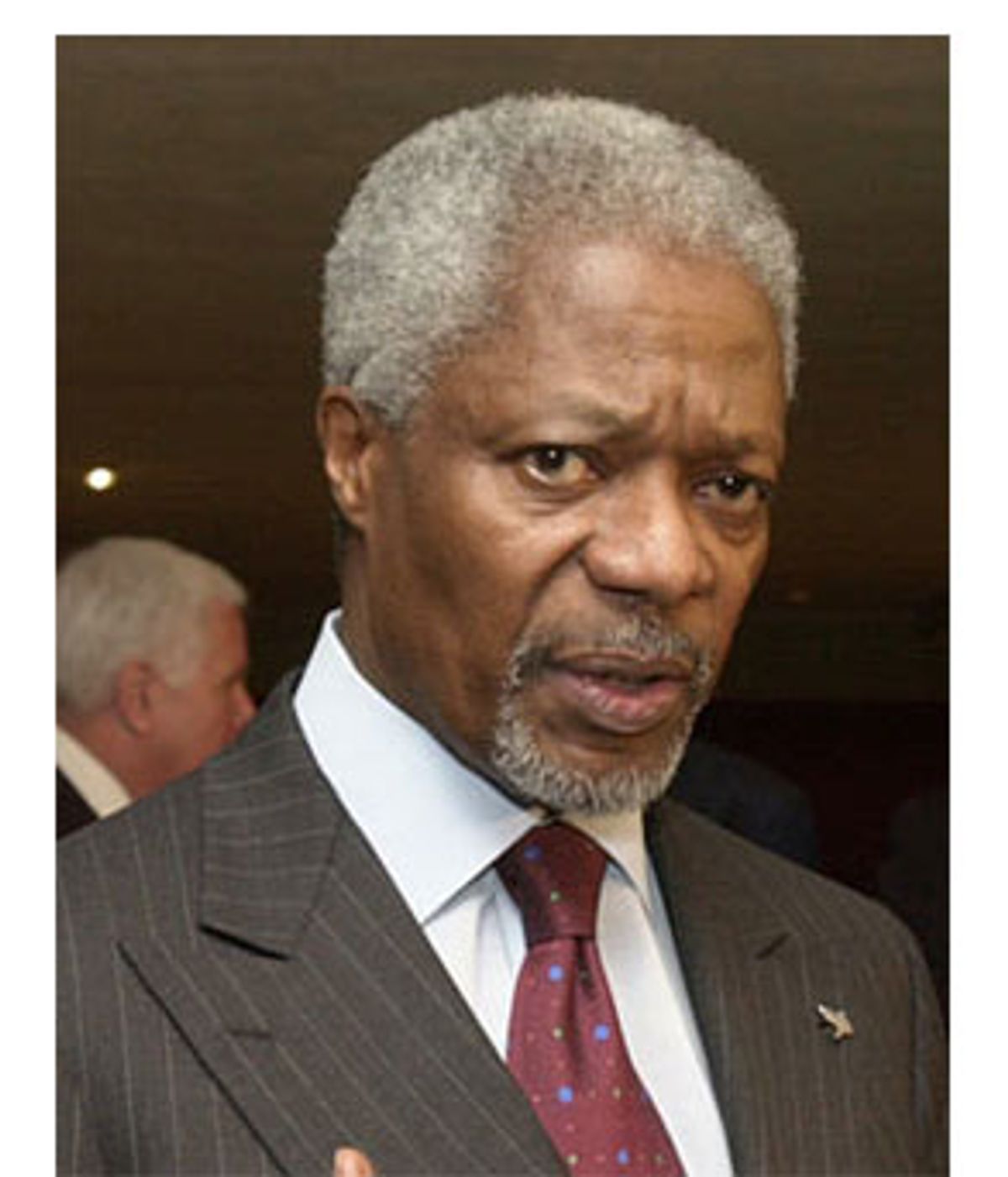 President Bush has done a lot in very little time to undermine the macho image of Texans worldwide. Foreign leaders now see there is no apparent limit to the defiance he will endure from his friend Ariel Sharon, the Israeli prime minister. Never has the tail wagged the dog quite so energetically or humiliatingly. Foreigners tend to have longer memories than Americans, particularly in the Middle East, and outside of Israel, diplomats unfavorably contrast Bush's behavior with the way his father went nose to nose with then Israeli Prime Minister Yitzhak Shamir when the latter assumed -- wrongly -- that he could defy the White House on the question of Jewish settlements in Palestinian territory.

Now, two weeks after ignoring Bush's demand for an end -- "without delay" -- to Israel's Operation Defensive Shield, Sharon has succeeded in rebuffing a U.N. fact-finding mission in Jenin, apparently with U.S. blessing. An angry Kofi Annan called off the planned inquiry late Wednesday. Israel may escape immediate consequences for its defiance, but the obstruction will have far-reaching ramifications: for the country's image, for the United Nations, for the U.S.'s diplomatic stature, and above all for the administration's war on terror, which seems increasingly to be shorthand for "leave Afghanistan a shambles, let Sharon have his way in the West Bank, and full speed ahead to Baghdad."

But as a result of the way he's handled Sharon, Bush is likely to find greater international opposition to his demonizing of Saddam Hussein. How, after all, can Bush argue that Saddam's refusal to allow U.N.-mandated weapons inspectors merits his overthrow, while Sharon's defiance of multiple U.N. resolutions opposing Israel's military incursion into Palestinian territory, and of a fact-finding mission in Jenin, merits calling him "a man of peace?"

U.N. diplomats have been seething over Israel's moves for weeks, but the scuttling of the Jenin mission has set tempers to a boil. Security Council members recall that it was Shimon Peres himself who called Kofi Annan and welcomed a Jenin fact-finding mission -- which led the U.S. to sponsor a resolution calling for the mission and to add Security Council force behind it. That of course headed off a much stronger resolution that was being moved by America's closest diplomatic ally, Britain. The U.S. had used the same tactic earlier to move resolutions calling on Israel to withdraw from the territories, which seemed at the time designed to head off Annan's proposal that a strong multinational force be used to restore peace to the territories.

But after welcoming the mission and saying Israel had nothing to hide, first Sharon and then Peres have been backpedaling furiously ever since, alienating Security Council members even more than before -- and burning up virtually all eight years of diplomatic credits that Israel had amassed since Oslo. Lawyers assigned to work with the Israeli government to prepare for the U.N. team quickly concluded that the parameters of the inquiry couldn't help but leave Israel open to charges it had violated international law. Peres went so far as to suggest that the inquiry he'd asked for was "an attempt to place baseless blame, almost a blood libel, on Israel." Sharon began to backslide almost immediately.

Summing up his colleagues' reaction to Israel's wiggling out of its initial commitments, Ireland's U.N. ambassador, Richard Ryan, was unequivocal. ''We feel that the secretary-general, the international community, has been affronted by Israel,'' he said.

Perhaps the most worrisome thing for the rest of the world is that the world's only superpower comes out of the Jenin mess looking terribly divided against itself. According to some accounts, after Secretary of State Colin Powell persuaded Peres to agree to a mission and directed his diplomats at the U.N. to vote for it, National Security Advisor Condoleezza Rice assured Sharon he could essentially stonewall it with impunity in return for a side deal on letting Arafat out of his cage in Ramallah. The cage was opened Wednesday, just before Annan announced the cancellation of the Jenin mission.

At least one casualty of the mess is likely to be the close working relationship that Peres has had with Annan, who has done more than any of his predecessors to normalize Israel's position in the U.N. Perhaps more important, Colin Powell, the U.S.'s sane diplomatic face to the world, has once again been sidelined by his own colleagues, snubbed by Sharon and Peres, and thus weakened inside the administration.

Still, Ahmed Aboul Gheit, Egypt's ambassador to the U.N., was optimistic that some compromise may still be achieved in the Security Council: "You cannot allow the secretary-general to be snubbed or rebuffed the way the Israelis have, and then say, 'I will fold my papers and walk away.' Then you are considering the future of the Security Council, the United Nations and everything else. In future, the response will be, 'See what you did with the Israelis? To hell with you!' That is what I was conveying to Americans today, and they themselves realize we need some kind of response -- I just hope it is not too timid."

Asked about the suggestion that the U.S. cut a deal that sabotaged the U.N.'s Jenin team in exchange for a Ramallah pullout, Gheit could not confirm it. "The team is important -- it is the image of the United Nations and of international humanitarian law. It should not have been compromised; it is shameful if that is true."

And yet, the refusal to allow a fact-finding team to enter Jenin is understandable if the reports from organizations such as Physicians for Human Rights and Amnesty International, not to mention much of the world's press, have any credibility. Ariel Sharon probably did not emulate a Sabra- and Shatila-style massacre in Jenin, but the consensus from most observers is that the manner of the Israeli assault broke international humanitarian law in many ways, from using civilian shields to refusing access to ambulances and relief supplies.

"The evidence compiled indicates that serious breaches of international human rights and humanitarian law were committed, including war crimes," concluded Amnesty, "but only an independent international commission of inquiry can establish the full facts and the scale of these violations." Physicians for Human Rights reported from the hospitals that "women, children under 15 years, and men over the age of 50 years accounted for over 50 percent of all admissions," and that its interviews "indicate multiple-day delays in enabling wounded people to reach a medical facility. The information received by the assessment team calls into question Israeli public statements that it seeks to provide assistance to the wounded on both sides."

Of course Israel also compounded suspicions by keeping the media away as well. It seems that Israel's lawyers also suspected that no matter how much they tried to stack Annan's mission, circumscribe its mandate, restrict access to witnesses, and otherwise try to shape its findings, there was an overwhelming probability that the Israel Defense Force's actions would be found in violation of international law, with uncertain consequences.

But by shamelessly stonewalling the U.N., Israel has convinced much of the world that there may even be truth in the charges of a massacre. This is why Powell and others insisted that the U.N. mission could actually help Israel in the court of public opinion, which is not inclined to give Israel the benefit of the doubt. It's still possible that Israel's hardball moves will backfire and that the proposed fact-finding mission may yet be replaced by a more rigorous investigation, whether inside or outside the territories, which could come to more substantial and damaging conclusions.