This hackneyed throwback to greasers and rumbles steals everything and nothing from the classic gang films that came before it. 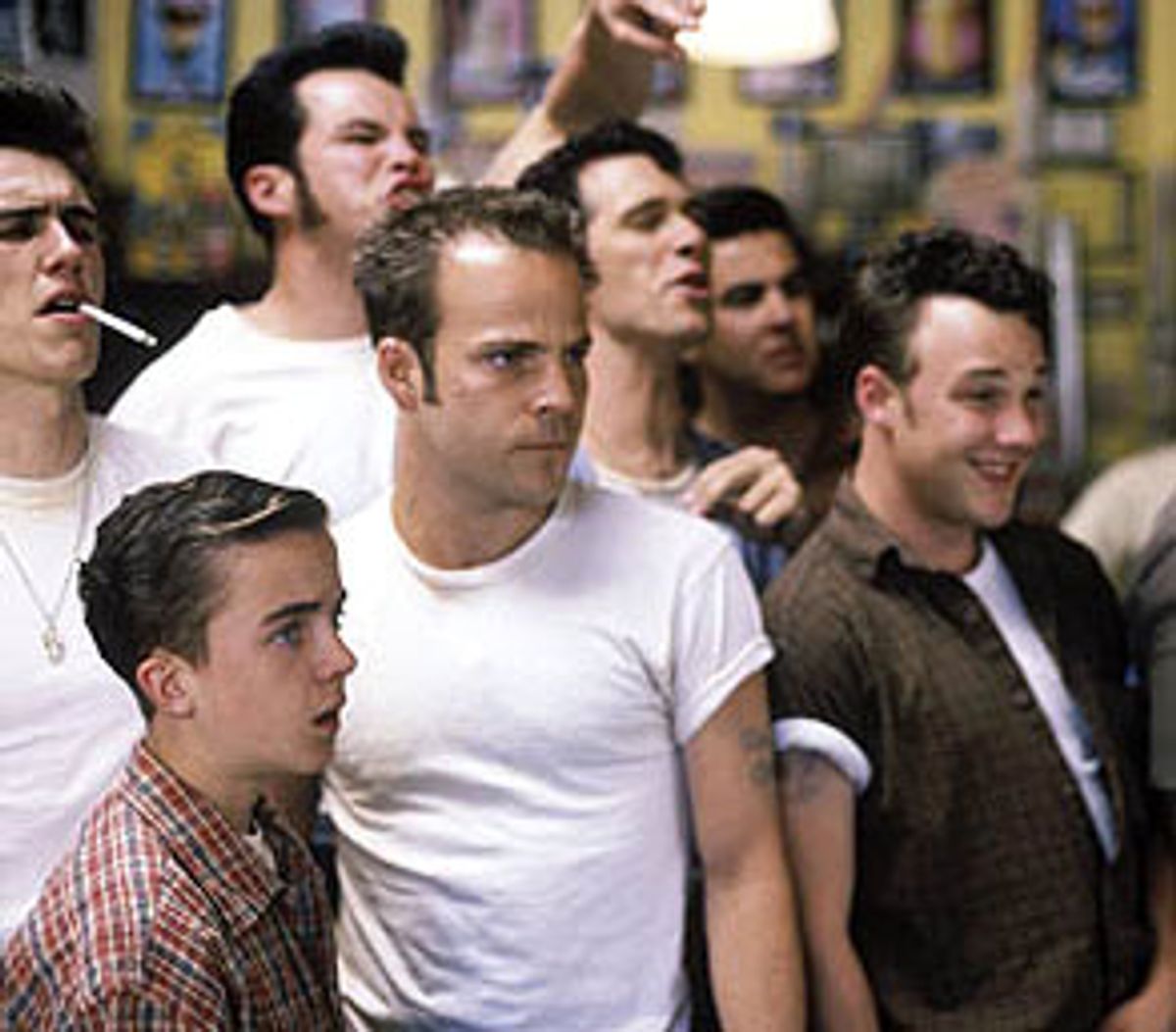 It's entirely possible to take a stale and calcified old story -- a '50s neighborhood gang saga replete with murder, revenge and illicit love, for instance -- and revitalize it, or at least make it reasonably entertaining. But as an audience, what are we to make of a filmmaker who offers us just such an ancient morsel without even scraping the mold off it first?

That's what Scott Kalvert ("The Basketball Diaries") forks over in "Deuces Wild," a drama about two rival gangs who face off in 1958 Brooklyn. That was the year, a voice-over tells us early in the movie, "the streets of Sunset Park ran red -- with blood." And pink -- with baloney.

"Deuces Wild" might have been consciously overdone fun: Clichés can be polished and sharpened in a way that only increases an audience's delight in them. But the movie takes itself far too seriously. It also grabs desperately onto every significant gang picture that's come before it, from "West Side Story" to Walter Hill's "The Warriors," without adding anything new or original. Here come the Jets, again -- only this time they're more like the Scooters.

Most of the actors in "Deuces Wild," even the very familiar faces, are blurred and undistinguished: They all look like the Stray Cats gone bad. Stephen Dorff is the leader of the Deuces, who are forced to defend their neighborhood when a very bad dude in the form of Norman Reedus is released from prison. (Reedus' character's name is Marco Vendetti, which means that "Revenge" is not his middle name -- it's his last.)

Vendetti and his thugs, known as the Vipers, want to open a casino-slash-hangout on the Deuces' turf, and unfortunately for the Deuces, they've got the blessing of neighborhood top dog wiseguy Matt Dillon (who has the good sense to take the movie's god-awful broadness in stride, turning his tiny role into an amusing Marlon Brando sendup).

But there's another angle: Dorff has a younger brother, Brad Renfro. A third brother was killed three years earlier after OD'ing on heroin sold to him by Reedus, which means that the brothers really don't care for him very much. To make things even thornier, Renfro has fallen in love with toughie girl Fairuza Balk (who manages to rise above the movie's inanity in her spitcurls and Bettie Page bangs), who happens to be the sister of Balthazar Getty, one of Reedus' right-hand men.

Whew! But if it sounds complicated, it's really not. In fact, it's so uncomplicated you could go out for spaghetti after the first 10 minutes and slip back into your seat just in time for the last 10, and you wouldn't feel you'd missed a thing, save a rumble or two. That's not entirely fair to say: You would have missed Vincent Pastore ("The Sopranos'" Big Pussy himself) in the requisite "You kids! You make the world doity!" role as a local parish priest. And you would have missed that effervescent little spud Frankie Muniz ("Malcolm in the Middle") in the role of the young squirt who strives to be a full-grown punk.

You also would have missed most of Debbie Harry's performance, as Balk and Getty's zonked-out mother, a nutcase who listens to Christmas music year-round. It's a thankless, limp rag-doll of a role for Harry, and in her few brief scenes, you wonder if she doesn't know how much of a joke it is: She seems tuned out, and not just because she's playing a disengaged character.

Some of the actors stumble through valiantly, trying to make the best of all kinds of wooden dialogue, while others cut their losses and coast wearily. Dorff, who was terrific in "Backbeat," phones it in here, using a couple of Dixie cups connected with a piece of string. Balk, the movie's liveliest presence, does her damnedest with the material she's been given. Comforting mother Harry after Getty has told her in no uncertain terms what a loony she is, Balk reassures her, "Of course there's a Santa Claus. He just don't come to Brooklyn no more." Which proves he's just as tired of the clichés as everybody else.