Can Tommy come out and testify?

Homeland Security Director Tom Ridge speaks at a press conference-like briefing -- but rejects an invitation to appear before a Senate committee. 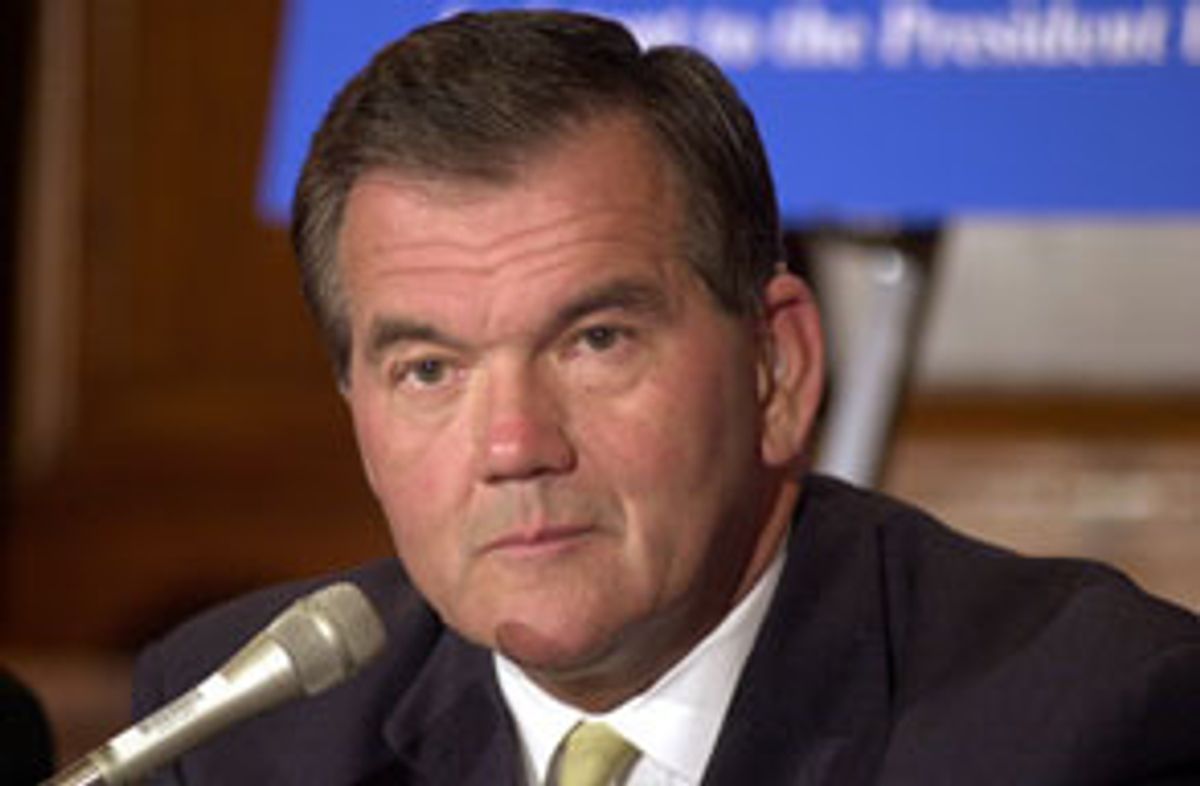 Senators are attacking his absence from their committees, a prominent liberal think tank is attacking his policies, and the White House refuses to let him testify before Congress. So if you were Homeland Security Director Tom Ridge, what would you do?

Ridge rebuffed another invitation from two senior senators Thursday and instead held a media-friendly "briefing" on the Hill. But it seemed to be yet another awkward move for Ridge, the post-9/11 appointment whose job, meant to keep the peace, has often seemed to create even more friction.

Democratic and Republican leaders on Capitol Hill have been trying for months to have Ridge appear before a number of different House and Senate committees, only to be consistently thwarted by the White House, which continues to argue that Ridge cannot, should not and will not be made to testify. The latest Ridge snub of a congressional committee came when he turned down an invitation from Sens. Robert Byrd, D-W.V., and Ted Stevens, R-Alaska, to testify before the Senate Appropriations Committee, which is deliberating over the president's homeland security plans. The president's budget calls for $38 billion in the 2003 budget for homeland security, the bulk of which -- $10.6 billion -- will go to securing America's borders.

But the White House again said no. So instead, Ridge held his own briefing on Capitol Hill, across the street from the committee hearing, ostensibly at the invitation of Sen. Orrin Hatch, R-Utah. While Ridge carried on about the minutiae of border security, the real message seemed to be that Ridge is happy to visit Congress, and let the public know he's visiting Congress, but only on the White House's terms, and not to be grilled by increasingly frustrated Democrats.

"This orchestrated event comes on the precise date that Senator Stevens and I offered to Tom Ridge to testify before this committee," said Byrd. "But instead of allowing director Ridge to testify, the administration would rather trivialize homeland security with these made-for-television stunts."

Ridge spokesman Gordon Johndroe said Thursday's briefing was "far from a media stunt," saying Ridge came to Capitol Hill at the request of Hatch. "I'm curious about what question Senator Byrd is not getting answered because [Ridge is] around, he's up here all the time," Johndroe said. "And when he's not here, his staff is constantly here keeping members of Congress informed about the president's plans for homeland security."

But even the Ridge event created its own misunderstandings. "This is a P.R. event to make it seem like Governor Ridge is accessible," said Sen. Debbie Stabenow, D-Mich. "But this does not take the place of testifying."

As Ridge's briefing got under way, Stabenow, the only Democrat to attend, glanced disapprovingly around the room, where journalists outnumbered senators 3-1. She mockingly thanked Ridge and Hatch, saying, "I very much appreciate being invited to the press conference." She asked one quick question about a bridge between Detroit and Canada, and then walked out of the hearing room miffed.

In an interview with Salon afterward, Stabenow echoed Byrd's criticisms, accusing the administration of injecting politics unnecessarily into the debate over national security. "There shouldn't be a fight," she said. "I find it extremely distressing that the White House would choose to fight and resist [Ridge's] coming to the committees. We are really quite perplexed. We don't know what [Ridge] has to hide."

Stabenow pulled a schedule from her bag, compiled by her office, indicating that the briefing would be for senators only. "This is not the kind of briefing we'd normally receive in the Senate," she said. "This was in a press conference format, a very structured press conference."

But the structure of the briefing did not seem terribly different from what was going on in the Appropriations Committee. In both rooms, the journalists in attendance outnumbered the senators. Like the witnesses before Byrd's committee, Ridge engaged in a give and take with senators as television cameras rolled.

And Stabenow's understanding that Ridge's meeting was supposed to be members-only was apparently not correct. Calls to Ridge's office by Salon Wednesday indicated that the meeting would be open to the public and press. When asked if the original plan was to have a closed briefing, Johndroe shook his head.

If Stabenow was misinformed, she was at least on message, echoing Byrd's earlier statement that Ridge's refusal to testify was not only disrespectful to Congress, but was keeping Congress from making informed decisions about national security policy.

Byrd, for one, vowed to soldier on. "If Mr. Ridge will appear before our committee, we will welcome him. The invitation is open," Byrd said. "But if the administration continues to deny our bipartisan requests, we will do our best without him. We cannot be distracted from our efforts by these sophomoric political antics."

The flap over Ridge's testimony, or lack of it, before congressional committees is the latest focal point in an ongoing struggle between the White House and Congress that has marked this administration from the beginning. The General Accounting Office has a lawsuit pending against Vice President Dick Cheney and his energy policy task force. The GAO is seeking to find out more information about who met with the administration while the Bush energy plan was being assembled. Cheney has said the GAO's requests threatened the ability of the executive branch to conduct its business.

The White House may also be attempting to shield Ridge from what could be a contentious hearing before the Senate committee. If Ridge were to testify, he would surely hear a number of objections from Democrats over the particulars of the Bush national security plan. In his remarks today, Byrd referenced a new report released Monday by the Brookings Institution criticizing many pieces of the Bush plan, and the way Ridge's job is currently structured.

"The Brookings team found a number of shortfalls in the current administration approach, including the fact that the primary missing ingredient from all of the debate and discussion is a clear, coherent plan that identifies our most critical vulnerabilities," Byrd said. The Brookings report also raised concerns that the Bush plan is "concentrating on the last war rather than the possible next one" and said the administration was not spending enough on new security measures. The report called for the private sector to absorb much of the cost of the new security measures to prevent a catastrophic terrorist attack, measures which could cost up to $10 billion per year.

Johndroe said the report "has some interesting suggestions. Some of them are not far off. However, the report's call to raise taxes is not something that this administration supports."

Even if Byrd didn't get Ridge, most of the other stars of the Bush Cabinet have appeared, or will, before the committee. Thursday, Attorney General John Ashcroft testified, as did Transportation Secretary Norm Mineta, Health and Human Services Secretary Tommy Thompson and FEMA director Joe Allbaugh. Monday, Secretary of State Colin Powell, Treasury Secretary Paul O'Neill and Agriculture Secretary Ann Veneman appeared before the committee. On Monday, Defense Secretary Donald Rumsfeld is scheduled to testify.

That semantic distinction, Stabenow says, has led many in Congress to believe Ridge's job should be a full Cabinet-level position, which would mean, among other things, that the job would require Senate confirmation.

"There's a growing consensus about that," Stabenow said. "If that's what it takes to get him to testify, then maybe it is a good idea."

It's ironic that Ridge, the man who was supposed to be in charge of facilitating communication between various government organizations on security measures, has become the focus over a struggle between two branches of government over information. Critics, including Brookings' Ivo Daadler, one of the authors of the report, argue the administration has refused to give Ridge any real power. When he does appear, it's for strange initiatives like the color-coded terrorism warning system, which has been widely lampooned, and is reportedly going to be changed, if not abandoned, soon.

Johndroe says that issue is part of a larger discussion underway at the White House about organizing the bureaucracies responsible for American domestic security. "There has been some discussion about whether the job should be Cabinet level, or simply in the executive office," he said. "That's under review right now."

That decision is expected in a comprehensive report from the White House this summer.