Endearing Toby Maguire and Kirsten Dunst, the sexiest superhero's girlfriend ever, shine in this low-key but charming blockbuster. 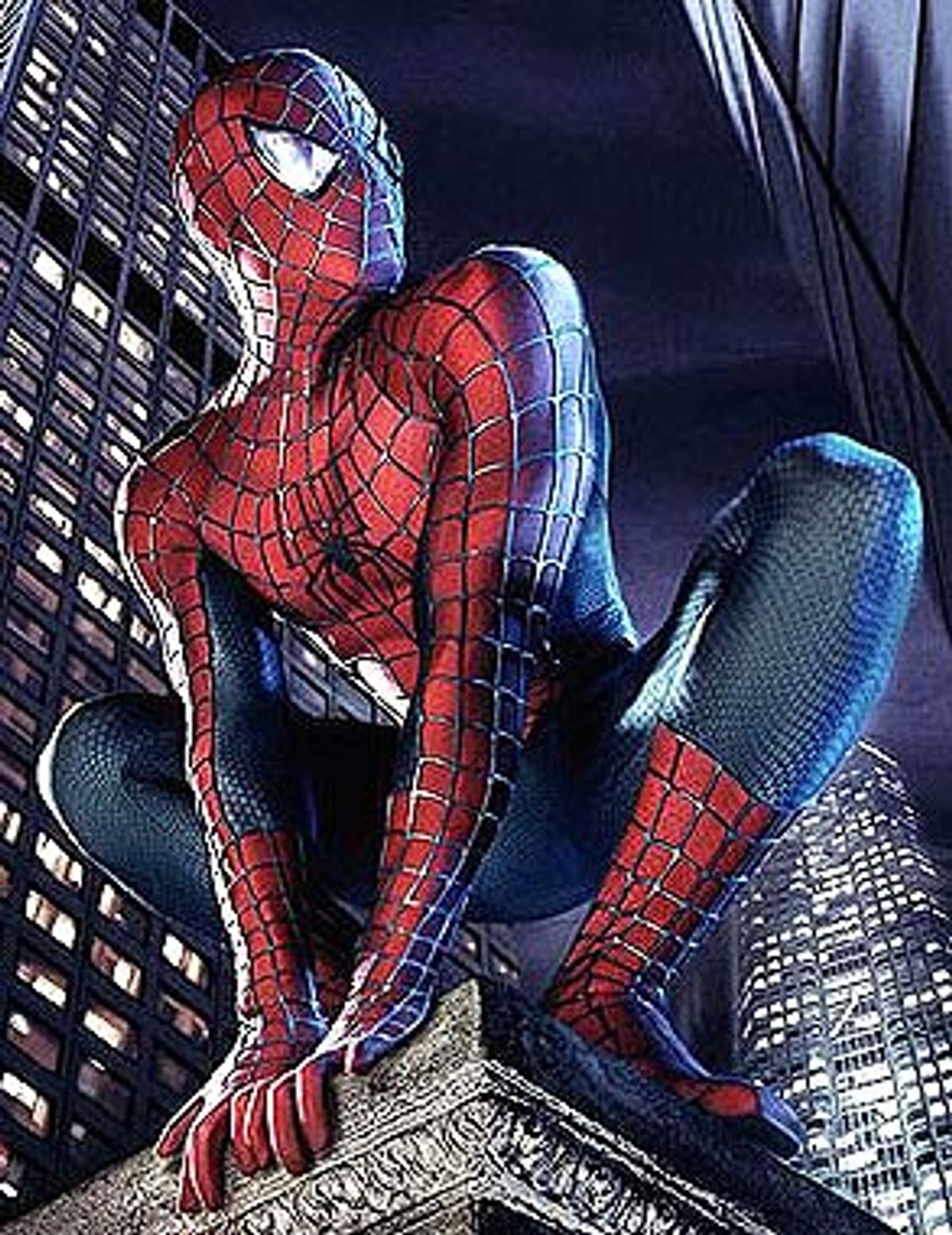 The first "Spider-Man" comics, by Stan Lee, Steve Ditko and Jack Kirby, had a modest, quotidian feel. The simple plots and familiar settings -- high school, home, the big city -- seemed especially suited to the story of a nerd who, thanks to a bite from a radioactive spider, gains superpowers and becomes the web-slinging crime fighter.

That's the tone the new "Spider-Man," directed by Sam Raimi from a script by David Koepp, aims to replicate. There's nothing in "Spider-Man" to match the delirious Wagnerian grandeur of Tim Burton's "Batman," or the hard, gleaming surfaces and combination of melancholic undertow and propulsive motion that suited "X-Men" so well. Raimi doesn't try to transcend the material or give it a large-scale operatic lushness. Set in Queens, where Peter Parker (Tobey Maguire) lives with his Uncle Ben (Cliff Robertson) and Aunt May (Rosemary Harris), and Manhattan, where he works as a photographer for the Daily Bugle and swings from skyscraper to skyscraper in his guise as Spider-Man, the movie serves its source material.

Episodically told, the picture isn't especially thrilling, and its moments of visual glory are less than you might want. What holds the movie together is its modest, sweet spirit. It's easy to forgive the flaws in a big-budget comic-book blockbuster when the picture displays the affection and decency (toward its characters as well as the audience) that "Spider-Man" does. Raimi isn't out to bash us over the head, and he directs action sequences so you can actually tell what's going on in them (whereas most contemporary action movies are visual gibberish). If "Spider-Man" isn't the dark dazzler other directors have achieved in comic book movies, it's also not a cheat. "Spider-Man" is a movie made by honorable people who want to do good work (as opposed to a pretext for merchandising tie-ins), and there's nothing crass or cynical about the ways in which it falls short.

The biggest thing "Spider-Man" has going for it is the charm of its two young leads, Maguire and Kirsten Dunst, who plays Mary Jane, the girl next door whom Peter has pined for since they were kids. Reportedly, Raimi had to fight the studio to cast Maguire, who wasn't their idea of an action hero. It would be sheer foolishness to expect studio execs to actually know something about the movie they were financing, and Maguire is a perfect piece of casting. The Peter Parker of the comics is a slight, bespectacled bookworm, picked on by the other kids, and a dutiful nephew to the aunt and uncle who raised him.

Peter is the opposite of Superman who, in the guise of Clark Kent, was a suave man playing a wimp (the quality that Christopher Reeve, with his ace timing, caught so well). Peter really is a wimp. Being Spider-Man allows him to live out his fantasies of being cool; it puts him in tune with his inner wiseass. Casting a musclebound, conventionally good-looking stud in the role would have canceled that tension and given the audience no reason to root for him.

Maguire, who, behind his perpetually dazed expression, understands how to play sly comedy, wins us over immediately. He's like the 98-pound weakling who got sand kicked in his face in those old comic-book ads, only with a canny, ironic sense of his newfound powers. Maguire uses that weird curved smile of his (it always seems to start on one side of his mouth and slowly spread to the rest of his face) to convey the pleasure of a science whiz seeing an experiment go spectacularly right. His big blue unblinking eyes seem to open wider when there are more wonders to take in.

Koepp and Raimi do some sly comedy of their own in the scenes where Peter tries to get his web-spinning abilities under control. The gummy white fluid that shoots out of his wrists becomes a metaphor for the other thing that teenage boys often can't control. And Koepp has provided Maguire with some dandy repartee as Peter invokes every superhero slogan he can remember ("Sha-zam!" and so on) to take charge of the webs as they fire wide of their target.

One of the things that makes Spider-Man difficult for an actor is that, unlike Superman or the X-Men or even Batman, his entire face is hidden behind a mask. Wisely, Raimi and Koepp keep those scenes brief. When Maguire is in costume he uses that peculiar voice of his, something of a high, lilting croak, a voice that seems to find each joke in the course of telling it, to remind us of the guy underneath. In the climax, when Spidey's mask is half torn off, we get to see both that unblinking weblike visage and Peter's own scared countenance side by side. It's an elegant little visual metaphor for the divisions in the character.

Maguire does some wonderful physical work. When we first see Peter shinny up a wall, he affects a creepy-crawly contortionism that suggests something not quite human. And he's possessed of his own loopy ardor. The moment where he declares his feelings to Mary Jane, fixing her with those blue peepers, feels like it comes out in a single breath, and yet isn't rushed. It has the enticing and slightly unsettling romanticism of someone ushering his loved one into his rich fantasy life.

Mary Jane is probably the sexiest, sassiest girlfriend any superhero has ever had. Dunst might have seemed too sunshiny for the role (though that quality is also the source of her best comic performances). In red hair and tight, clingy tops, Dunst puts the open sexuality she showed in last year's "Crazy/Beautiful" to new uses. She's like a teen version of the wisecracking dames who inhabited '30s comedy. This girl knows the score. She's a natural cutup: Mary Jane preens and poses as Peter snaps photos of her pretending to be fascinated by a science exhibit. And without warning, she can suddenly go deep and quiet, as those bright eyes cloud over and her buried emotions come to the surface.

Dunst and Maguire have a lovely, quiet scene, while talking in their adjoining backyards at night, that captures the rapport between them without forcing a thing. And they have the movie's single best moment: After Spidey has rescued Mary Jane from a pack of muggers, he hangs upside down into the rain-soaked alley as she peels the lower half of his mask back for a lingering kiss. It's a moment of dark enchantment, and you wish the filmmakers had ventured deeper into that spirit of potent eroticism.

One of the reasons the movie feels a little pokey is that it doesn't seamlessly meld the story of Peter exulting in his new role with the plotline of his fighting the movie's main villain, the Green Goblin. That's the role played by Willem Dafoe, as the tycoon scientist Norman Osborn, who is changed by one of his own experiments into an evildoer bent on -- what else? -- dominating the big city. (The character is also the father of Peter's best friend, played by James Franco, who, the movie leads us to believe, will play an important role in the sequel.)

Dafoe's Green Goblin get-up, a piece of metal body armor, unfortunately includes a motionless mask that hides his face. Luckily Koepp has provided Dafoe with a spectacular scene where Osborn, staring in a mirror, has a conversation as himself and as the Goblin. It's beautifully staged and shot. It's also perhaps the single best piece of screen work Dafoe has ever done. He makes the Jekyll-and-Hyde transitions on a dime, so crystal clear that you actually see him shift personas. The script could have allowed more of Osborn fighting with the evil persona that has taken him over, but Dafoe works to distill all of it in that one sequence. (Unlike many big-budget action pictures, "Spider-Man" actually has a script. Koepp writes good dialogue for the characters, with just enough curlicues to keep it from sounding comic-book flat or comic-book campy.)

There's also a terrific supporting performance from J.K. Simmons (who plays the shrink on "Law & Order") as Daily Bugle publisher J. Jonah Jameson, who's out to prove Spider-Man is a menace. In a salt-and-pepper whiffle and big mustache, Simmons looks so much like the Jameson from the Spider-Man comic that the audience bursts into laughs when it first lays eyes on him. Simmons keeps the laughs coming, chewing his scenes like the fat stogie Jameson keeps stuck in his cake-hole.

"Spider-Man" is a considerably better piece of direction than Raimi's last comic-book outing, "Darkman." He uses the Queens and Manhattan settings to ground the movie in a recognizable reality. And though the CGI effects are disappointing (looking both hyperreal and, inevitably, fake), the first sequence of Spider-Man swinging through the canyons of New York is nicely done. It gives you a sense of the passing landscape as Spidey sees it out of the corners of his eyes as he swoops and rises, straining to get into rhythm. (If sailors find their sea legs, what do web-slingers find? Their air legs?)

There are also little jokes that catch the corner of your eye -- like the Terminix billboard during a Times Square showdown between Spider-Man and the Goblin. While the cinematography, by Don Burgess, is merely serviceable, there is one indelible image: Mary Jane and a cable car full of kids, each reflected in the eyes of Spider-Man's mask, as he must choose whom to save as each plummets toward the water below.

The main problem with Raimi's direction is that he doesn't think big enough. You want him to whip the material up into a heroic froth, to be caught up in something grand and dark and crazy, and he sticks stubbornly to the small, comic-book scale. He doesn't even work up the panache for what should be the movie's comic-emotional high point, the scene where crowds of New Yorkers turn up to cheer on Spider-Man and pelt the Goblin with refuse. You can't quite believe what you're seeing in that moment: Koepp has had the daring (and the heart) to come up with a comic-book version of the solidarity the city showed last fall. Halfhearted as the staging is, the generous daring of it makes you laugh with pleasure.

Perhaps Raimi didn't feel he could work on a bigger scale and keep his eyes on the characters. If that's the case, he made the right choice. I'll take good characters you care about over whiz-bangery any day. But maybe the almost certain success of this movie will give him the courage to take chances in the next one. Often, the second installments of pop-movie franchises, like "The Empire Strikes Back" and "Superman II," have been the best in the series. It's nice to be able to say that "Spider-Man," unlike so many big-budget summer movies, doesn't wear out its welcome.