Some argue that the convention of men paying for women is a harmless gallantry, like holding a door open. I beg to differ. 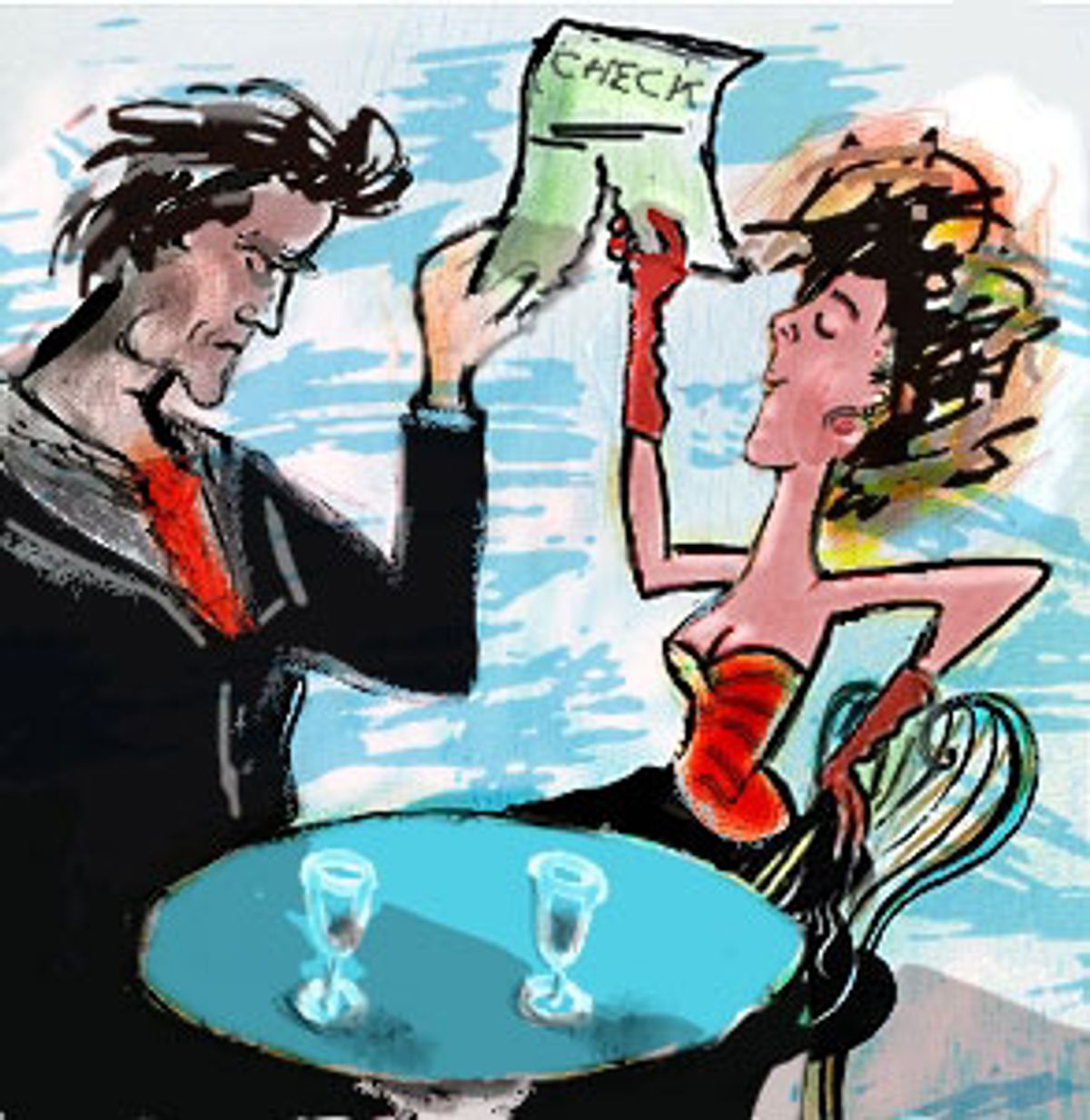 Lately, when I'm asked what I think a feminist is, I say, "someone who believes she should pay for her own dinner." Some people think this is such a tiny matter that it cannot be a way of answering the question; others laugh and ask what is so awful about having one's dinner paid for. To explain, I have to go back a couple of decades, to when I was 23 years old.

We were in a small Greenwich Village restaurant, my boyfriend Scott and I, and our conversation lagged as we waited for the check. You could get pasta and a salad here for under $10, and the room was pleasant enough, so the place was packed with people in their 20s. As we waited, I calculated my share of the bill, reassured that I'd still have enough for lunch tomorrow, the subway, the Wall Street Journal. Payday, I could not forget, was the day after that.

Every workday I bought the Journal because I couldn't take enough from any one paycheck to buy a subscription. I lived very modestly and close to the financial edge. I found this poverty as surprising as my friends did, for as a financial analyst at an investment bank, I made more money than most 23-year-olds. But even in those days 20 grand did not go far in New York.

The waiter, about our age, tall, thin and actorly, smiled over our table and presented the bill squarely to Scott.

This casual gesture stung like a slap in the face. I wanted to object that the bill belonged in the middle. How could this young, hip-looking waiter, my contemporary, assume I wasn't paying for my own dinner? No, no, I wanted to tell him: I make more than Scott, I'm on Wall Street.

My good mood had dissolved. I knew I wasn't supposed to get upset over trivialities like where the bill was placed; I knew that feminism was about equal pay for equal work, abortion rights and legal issues. Waiters who gave the man the bill were doomed to go the way of ladies' menus without prices. It was just a matter of time.

Twenty years later, as I research a book on money and gender, the young people I interview do not even know that there were menus without prices, but waiters still often place the bill in front of the man in a couple. None of the women I've spoken with seem to mind this, especially if the man pays the bill; and many men still expect to pay the bill if they are dining with a woman. Young women will tell you that they won't see a man a second time if he doesn't pay for the first date; they say it's a matter of respect.

There's an argument that the convention of men paying for women is a harmless gallantry, like holding a door open. I beg to differ. Gallantry is not identical with financial prowess, and I am not trying to ban it. Nor am I trying to collapse the difference between the genders, or to eliminate the small fetishes we use to render them more erotic. Unfortunately many of these have dissolved over the years, some under pressure from misguided feminists, so that we are left with the crudest and least imaginative: those based on money transfers. Vive la difference -- but let it not be parsed in financial terms.

I was angry with that waiter long ago because I was a competent economic actor and he treated me as if I were not. The waiter denied my competence because I was a woman out with a man. His gender stereotyping was especially annoying because Scott, who worked for an NGO, made less money than I did.

My interest in money, and my pride in making it, were very new. I'd gone through Harvard planning to become a philosophy professor, and entered the Ph.D. program in classical philosophy the fall after graduation. To my surprise and dismay, I was bored silly. I also felt trapped financially as never before.

Grad school meant not just the classes, but the ugly wallpaper and furniture from the street I could not afford to replace in the cheap apartment my boyfriend and I shared in a working-class neighborhood of dismal, aging triple-deckers. It was years before I could eat squid ($3 for a 5-pound frozen block) or liver (60 cents a pound) again.

By the end of the spring semester, I'd lost interest in teaching philosophy: I knew I'd go mad if I had to spend the next five years like this. The only ambition that made sense to me any longer was to become rich. Then, I thought, I could turn my attention again to Plato.

I had little idea what being rich meant, having grown up middle class. Wealth really meant the absence of the gray poverty of grad school. Yet I did not tell myself that I wanted to be middle class; I wanted to be rich. The difference for me was symbolic, connected with self-respect and ego more than possessions or experiences. I passionately wanted to be able to say that I was successful, even if it was just to myself that I said it. Money was a good thing, I knew with the unshakable conviction of one for whom it had been short. But the status that money provided was an even better thing.

The reality of my entry-level job on Wall Street wasn't much better, in terms of material conditions, than grad school had been. My apartment, which I shared with a friend, was the world's tiniest two-bedroom, and my room had no window. One cold night I walked three miles home from work because I could not afford the bus, which then cost 75 cents.

Still, I didn't feel sorry for myself or exploited. To the contrary: I had a new sort of pride. For the first time in my life I was earning my own keep. Then there was the symbolic value of the money I was earning. It was considered a high entry-level salary, and even if I could hardly live on it, the fact that other people thought it a good income comforted me. Money is an important part of the stories we tell ourselves to keep going, and for me at that time, "making good money" was key to my self-respect. That's why the waiter's placement of the bill in front of my boyfriend hurt so keenly.

Today, when I speak with young women, very few find anything wrong with the premise that men ought to pay for women on dates. Paying is not linked for them with responsibility and self-respect, and this strongly suggests to me that earning isn't linked with responsibility and self-respect either. But male tribute is -- preferably expressed in tangible terms.

Some women say that when a man pays for them, he shows that he values their company. If it were spontaneous, as sometimes happens between friends, there wouldn't be anything dubious about this. But as a convention, this is about subscribing to the values of a commercial society that reckons the value of a thing or experience to be its price. (On this logic, we should all pass out small tips to people who make witty remarks at parties or give gracious compliments.)

They will even admit that a man who spends more money entertaining them rates higher in their esteem than one who doesn't. In their language, he respects them more. If you press one of these women on this issue, she may protest that after all, the men insist on paying, the men very badly want to pay for her dinner.

I wonder. They may offer to pay, but what do they have in mind? Men do not use the language of respect when they talk about treating women to dinner. For some it is a convention they honor, for others one they begrudge. Some men will admit that they won't ask a woman out to dinner unless they can foot the bill for both of them, and that if they are going through a bad financial period they accept that they can't date. Others say that they are always prepared to pay, but that they admire women who offer to pay their share and take them up on it. And some insist on paying all the time, perhaps for reasons that wouldn't make most women happy.

One of these men compared his footing the bill to the territorial marking achieved by a dog peeing on a fire hydrant; for him it was about control. (He also noted that if the woman he was dining with knew more about wine than he did, he would expect her to have sufficient "charm" to let him believe otherwise.) Others claimed they don't mind paying but when they recounted stories of dates gone by, it was clear they have passed many moments over many years watching resentfully over every addition to the bill.

One man was able to recount the price of an errant high-priced entree from 15 years back. How much "respect" did these men really have for the women they dated? And how much of what I couldn't help hearing as disrespect stemmed from resentment at a financial imposition?

Few high-level jobs depend on being able to hold heavy doors open. But most high-level jobs involve making lots of money, and as long as being paid for (being bought) is associated with being feminine, there are powerful unconscious barriers to female success. Transfers of money are more powerfully charged in our culture, and as long as we construe gender as being about the flow of funds from men to women, in some deep but inescapable way all women are prostitutes, and all men are johns.

This is not something we should blame on men or the evil patriarchy. Whoever started it, women now bear the lion's share of responsibility for keeping it going. How to stop it? Well, it's amazing how you can just say no. Just put that credit card on the table with the man's. You can even treat him to a meal -- imagine.

Who pays for dinner may be a small and inconsequential matter, but the assumptions underlying these arrangements are not small and inconsequential. It is because women are raised to think of selling themselves -- however metaphorically -- that they choose the jobs and careers they do. Some of the reason for women's stalled progress toward the upper reaches of money and power in the business world has to do with the beliefs about money and self-respect that we all bring, literally, to the table.