The art of the scam 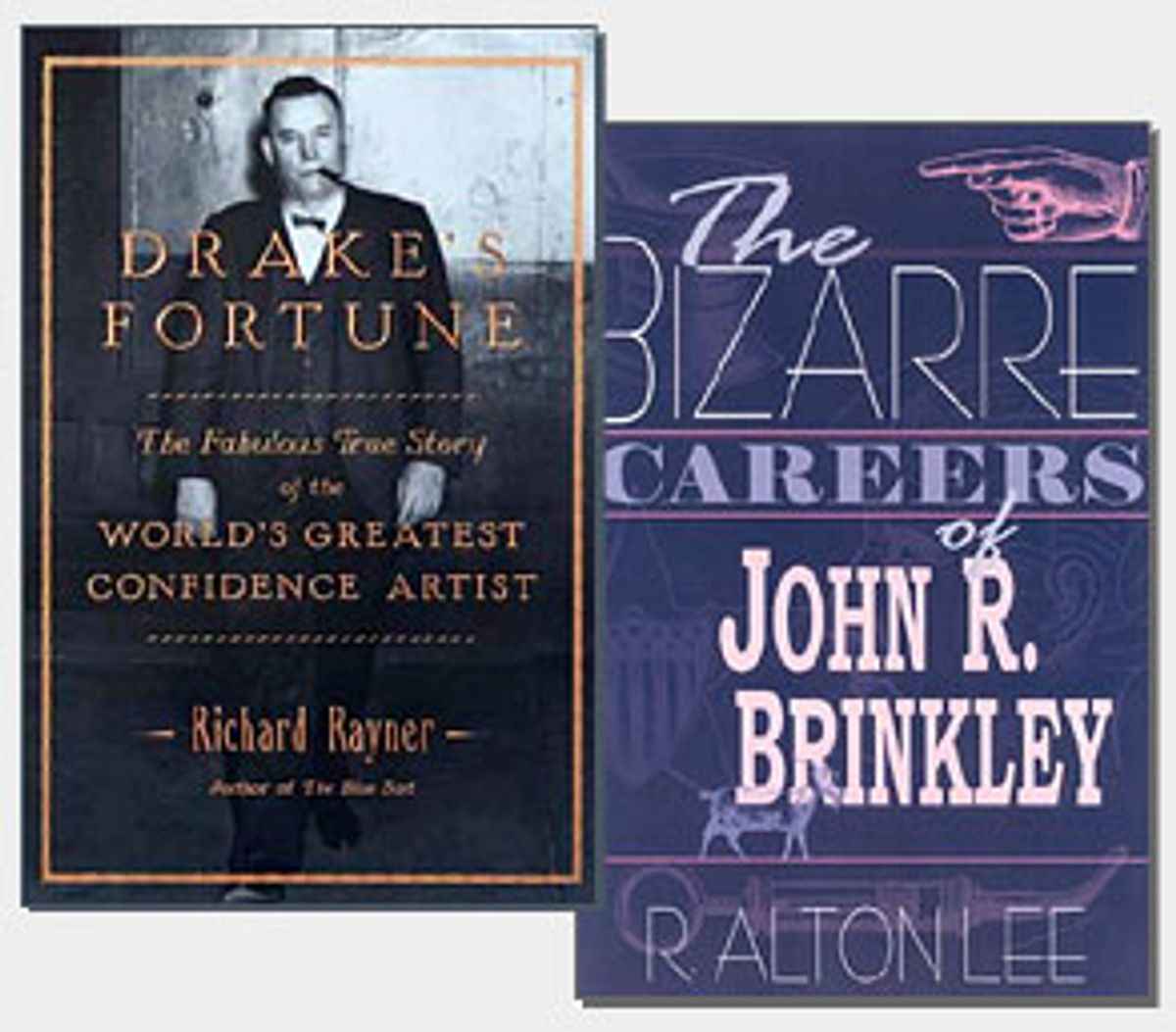 If to hustle is human and to con divine, the art of the extended con must have reached the ne plus ultra of its divinity in the U.S. in the 1920s and '30s, when oily operators like Oscar Hartzell and John R. Brinkley were pulling down staggering fortunes by filling people's hearts with hope and their heads with hooey. Both Hartzell and Brinkley are long gone, but wait! -- they live again in two new books that trace their crooked, dazzling trajectories. The first and best of the two is "Drake's Fortune: The Fabulous True Story of The World's Greatest Confidence Man," a biography of Oscar Hartzell by Richard Rayner. The second is R. Alton Lee's "The Bizarre Careers of John R. Brinkley."

Lee doesn't have the narrative chops of Rayner, who also wrote the novel "The Cloud Sketcher," but Lee's subject, the insatiably ambitious quack known as the "goat gland doctor," who claimed he could restore sexual prowess to impotent men, takes the Most Bent Personality trophy. It's a tough call, though -- Hartzell was a kaleidoscopic sociopath of no small accomplishment. Both men were preternaturally buoyant, apparently put on earth to prove that you can't keep a bad man down. Either would have felt at home in Enron's executive meetings.

Enron notwithstanding, when it comes to big-time grifters, Hartzell and Brinkley's days were golden ones for career scam artists. Like the 1990s, the anything-goes roar of the '20s heralded a decade in which the fantasy of fast living and free spending ignited the public's imagination even if the reality eluded most. That era ended with the catastrophic financial collapse of 1929, followed by the Great Depression, a considerably more dire situation than our current not so great depression, er, recession. It was a time that found many people in desperate straits, to put it mildly.

Oscar Hartzell intuitively grokked his times. His grand ruse was this: He sold shares in the incorrectly probated estate of Sir Francis Drake, the 16th century privateer, British admiral and plunderer of the Spanish Armada, who became fabulously wealthy on the gold, silver, jewels and other treasure he seized from Spain's ships. Over nearly two decades, Hartzell made millions by promising a piece of the action to those who gave him money to help untangle long unresolved legal issues around the Drake estate. Once settled, the estate would total in the hundreds of billions, he promised, maybe more.

As early as April 1924, Hartzell, a Midwesterner who operated out of London while running his con through agents in the U.S., was receiving a monthly payment of $2,250 by wire at the American Express office, which he treated like his personal club. By September of 1926 he was collecting $8,000 a month -- more than $80,000 in 2002 dollars -- and he tirelessly prodded his investors in Iowa to send more. His urgent wires, Rayner writes, "fizzed with self-importance and conviction. He preached. He commanded. His tone of authority impelled his readers to believe that he was indeed dealing with the 'highest powers that be,' the 'King's and Lords' Commission,' and the 'Ecclesiastical Courts.'"

Needless to say, there was no such thing as a "King's and Lords' Commission," the estate had been settled centuries earlier and none of Hartzell's 70,000 or more shareholders ever saw so much as a doubloon. But apparently his story, and his delivery, was so compelling, his game so engaging, that at the end of his life it was playing him. By the time he died, at age 67 in 1943, in a hospital for the criminally insane, Hartzell believed that he was Sir Francis Drake.

Brinkley's very different con was the promise of a revitalized sex life. His bogus "virility rejuvenation cure -- transplanting goat gonads into aging men" enabled him to build a pre-Depression empire that continued to flourish through the 1930s and included his own hospitals, radio stations, oil wells, commercial real estate, a Lockheed Electra airplane, yachts, lavish homes and a run for governor of Kansas that some say he would have won if not for voting fraud. Says Lee, "From Hrycus the He-Goat of the Renaissance, who was always 'burning for coitus,' to the development in 1998 of Viagra, a pill to reduce male impotency, aging men have sought remedies for the inexorable decline of their virility ... As Brinkley discovered, more often than not men are happy to pay." And pay they did. By 1929 Brinkley's annual income -- derived from prescriptions he gave after diagnosing patients over the air on his radio station and the 50 operations per week he claimed to be performing -- was between $1.9 million and $2.2 million ($19 million to $22 million in 2002 dollars).

Rayner also wrote "The Blue Suit," a memoir recalling his life as a thief during the years he attended Cambridge University, and his own father was a con man who sold cars he didn't own and then disappeared to South Africa. Rayner's résumé gives him a palpable connection to his subject -- he seems to regard Hartzell with a mix of contempt and admiration, and so do we. Both Rayner and Lee's books hit the same sweet spot as movies like "The Sting," "The Grifters" and maybe "The Thomas Crown Affair" do. The wicked cleverness of Hartzell's and Brinkley's stories, their ability to get something for nothing by turning the capitalist trick a few twists farther than most are willing to, makes us day job louts envious -- not that we're proud of it, mind you.

Rayner's book is the page turner of the two, but both volumes are portraits of indefatigable masters of self-invention who snatched the concept of the Horatio Alger story -- the dream of the endlessly energetic and innovative self-made man -- gave it a pathological skew and then knocked it right out of the park. Hartzell's vision was narrowly focused; he excelled at one-on-one conning or holding forth via letter. He preferred to operate remotely from his headquarters in London, where he owned several homes, kept various women, ordered Savile Row suits 100 at a time and dined every night at the Savoy Hotel. Even on the rare occasions when he returned to the U.S., where he attended public meetings to attract more investors, he let his agents do most of the talking.

Brinkley was his polar opposite. He was expansive, a workaholic. He was certainly the more complex of the two. He was something of a Bible-thumper but also a prewar admirer of Hitler. And yet he was generous and civic-minded; he even charged on a sliding scale for his phony gland operation, so those of modest means could afford to be fleeced. He understood the value of cultivating political connections and threw extravagant parties to which he invited the entire town. He was sort of a populist Ponce de Leon, offering a fountain of youth that he claimed to have discovered in the loins of a goat; his believers were interested in jump-starting their sex lives, or obtaining quick fixes for chronic maladies.

Brinkley's medical credentials were "shaky," and the operation that made him famous -- in which he placed slices of a 3-month-old Toggenberg goat's testis into a human's scrotum -- was, obviously, complete malarkey. Under oath, he admitted that "a 'majority' of the goat glands 'were gradually absorbed' by the patients bodies. 'I don't mean to say the little thing lived,'" Brinkley told the court. (Arghh, I'm not feeling so good all of a sudden.)

Brinkley had his hand in a million endeavors -- some legitimate, some definitely not, but Hartzell had a single story that he told and embellished over and over and over. He was "like a writer of mysteries or thrillers," Rayner says, and he had the true con man's ability to keep breathing life into his story whenever it stumbled or threatened to stall. Every obstacle was transformed into an opportunity. Every broken promise became a plot turn that propelled the tale forward and bought Hartzell more time -- to sell additional shares and to put off the anxious queries of those who'd already invested in his fantasy. He couldn't "tell his donors what they most wanted to hear," Rayner writes, "that the money -- all those billions -- was really on its way [so] he was constantly telling them the next best thing, that it would be coming very, very soon."

If King George V became ill, Hartzell seized the event as explanation for delaying the big payout: The sum that shareholders were about to receive was so enormous that the king had to approve the paperwork personally. When payment was again delayed, Hartzell would explain that "the value of everything to do with the estate of Sir Francis Drake for the last three hundred years had to be calculated and then reassigned -- you could see easily why it might take a lot of time, lawyers, and, therefore, money. If anything was wrong, if any of the seals on the documents were wrong, or any of the ribbons that were held by the seals were not tied right or cut in the right shape, then that could nix the whole deal." And as the ripples of his story spread to encompass most anything that happened on the planet, the amount of the "Drake fortune" itself grew and grew. Hartzell promised his shareholders they would be able to buy entire states, even countries. The settlement was so huge, he said, it would shake the world economy.

Brinkley, who was driven out of Kansas by the AMA and the FRC (Federal Radio Commission, precursor of the FCC) only to reestablish himself in Del Rio, Texas, with one of the country's most powerful radio stations, shared Hartzell's phoenix-like aptitude for turning every dark moment into a new horizon. In the end, though, like Hartzell he crashed and burned. Bankrupt, slain by cancer, he left it to his wife to clean up the financial mess that remained. Both men were that quintessentially American phenomenon: a creature who utterly transforms himself by erasing or largely obscuring his past and assuming a role that catapults him into an entirely different socioeconomic stratosphere.

The successful con man, Rayner writes, relies on two basic rules: "first, there is no seeming limit to the credulity of a greedy sucker once he's been hooked; second, the moment when a game appears to be all done and worn out, utterly exhausted, might just be the moment when it springs to life and gets interesting again. In this the con man is like Scheherazade in 'The Thousand and One Nights,' who understood that a part of us wants a good story never to be over."

This is the point where one is supposed to sagely suggest that, given the events of the go-go '90s and other fiduciary unpleasantness, including the above-mentioned Enron debacle, there is much we can all learn from Rayner and Lee's books about greed, lack of skepticism, ethics and morality. But that would be stupid, annoying and baloney. We read books like these not for a moral lesson, but to be taken along on a high-speed ride without having to pay for the gas. Hartzell and Brinkley were glorious hucksters, enchanting charlatans. These are their stories, so much more fun and colorful than the doings of those bland white-collar thugs in Houston. Put your inner scold on hold and read them with wonder, then call your broker or order some Viagra online.