Sam Jones wanted to make a simple movie about recording the Chicago band's newest album. Instead, he ended up with a saga. 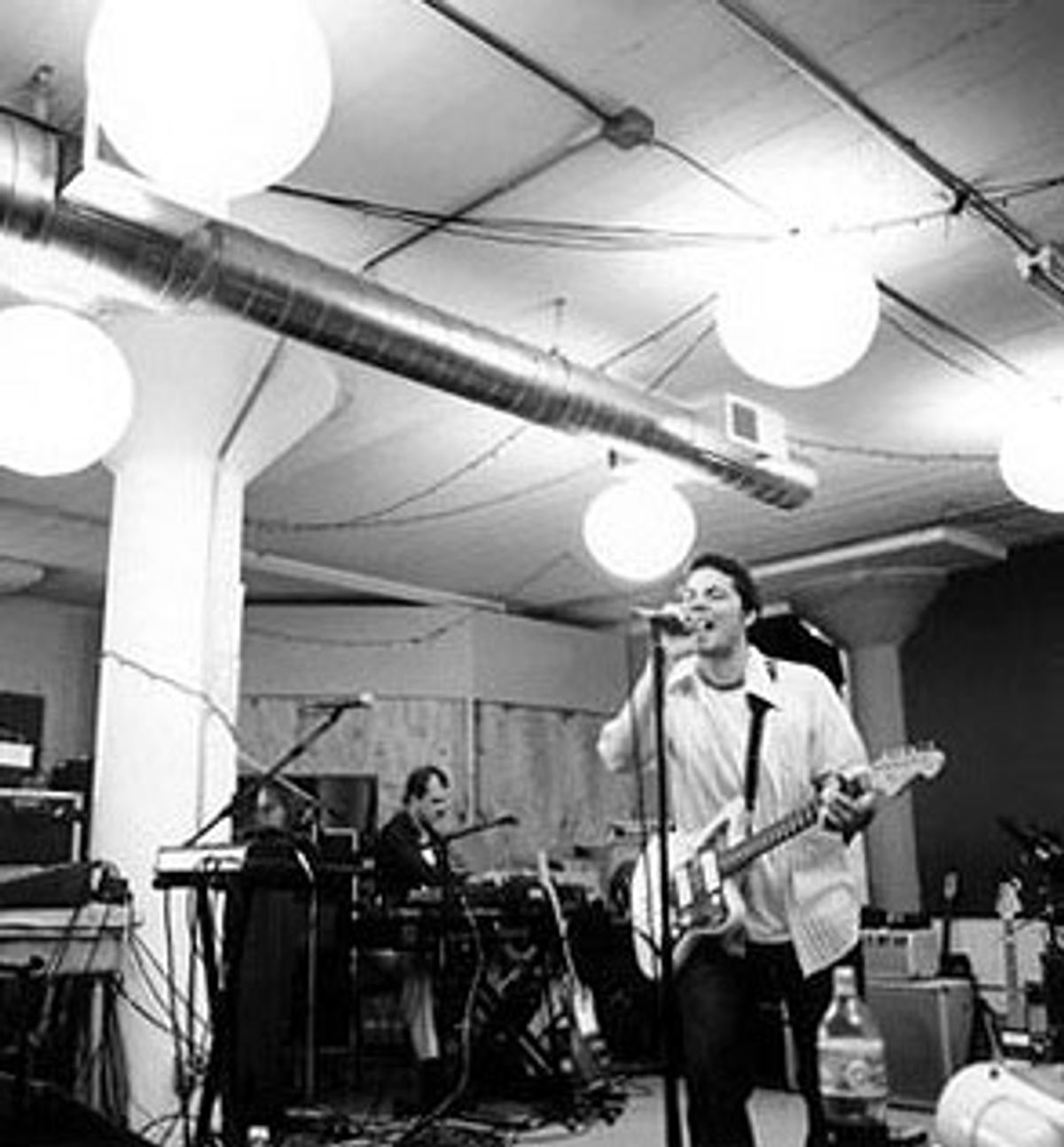 Sam Jones began with a simple plan. The Los Angeles photographer and TV-commercial director wanted to make a documentary of Wilco recording a new album. As a fan, he thought the group embodied the musical integrity of classic acts like the Band and the Rolling Stones. After a meeting with Wilco frontman Jeff Tweedy and band manager Tony Margherita, Jones signed on to make the film. Camera crew in tow, he showed up at Wilco's Chicago recording loft in January of 2001 and spent much of the next year filming the recording process, tours, the city of Chicago and interviews with band members.

Premiering at the Los Angeles Film Festival on June 21 and expected in theaters this summer, "I Am Trying to Break Your Heart" takes its title from the lead track of Wilco's new album, "Yankee Hotel Foxtrot." Influenced by classic rock documentaries "Dont Look Back" and "Gimme Shelter," Jones shot the film in black-and-white on 16mm, using a handheld camera to gather over 90 hours of footage. Jones initially financed much of the documentary himself, and later received funding from his boss at Fusion Films, as well as the occasional free roll of film from Kodak and sweetheart deals from a number of talented editors and cameramen to keep costs down. One such deal led to the development of the Wilco film Web site, where Jones posted a trailer, a filmmakers diary and outtakes of the developing film.

Jones didn't intend to present "I Am Trying to Break Your Heart" in linear fashion, but instead of the long-form rock video he'd imagined, a story developed and he ended up with the tumultuous tale of a band caught in the middle of a midlife crisis. While Jones was making his movie, Wilco were dropped by their record label more or less for making an album they deemed uncommercial. Then the band bought the rights to the album for a song, posted it on the Web and finally signed a new deal (with Nonesuch, a subsidiary of Warner Bros., as was their former label, Reprise). Tweedy also fired a drummer and lost a guitarist in the same span of time.

Jones recognized a classic structure. "It fell together pretty naturally," he says, "into three almost Greek parts. The first part is all about creation and the joy of creating. The second part, which is conflict, is about the conflict with Jay [guitarist Bennett] and the record company and some of the mixing with Jim O'Rourke, and then the third act is redemption and Wilco came out smelling like roses with a better record deal and a band Jeff is happy with. The story line's one that's been told thousands of times. Our hero goes through major conflict and comes out on the other side a winner."

The problems with Jones' simple plan surfaced before he shot the first reel. The day before he was going to start filming, Wilco fired drummer Ken Coomer. "Jeff pulled me aside and said, 'I gotta talk to you,'" says Jones. "I thought, Oh great. We're not going to be doing this film, he changed his mind or something like that. And he said, 'We've let Ken go.' So that was one of the hard things to deal with because when I started this project I figured I'd be filming Ken and Jay and Jeff and John and Leroy. That was kind of a shocker."

From there, it got worse for the band. In June of 2001, Wilco delivered "Yankee Hotel Foxtrot" to Reprise Records. The record was ambitious for a band like Wilco, one of the best of the so-called alternative country acts that popped up in the mid-'90s, signed back then, after the demise of Tweedy's Uncle Tupelo, when most of Wilco's songs rocked out in a rootsy kind of way. But following a path beaten by the dark '70s pop of "Summerteeth" (1999), "Yankee" went even deeper into studio experimentation, sometimes playing guitars with eggbeaters and smacking ceramic tiles with mallets for percussion. Tweedy's keen sense of melody didn't sound even distantly related to Wilco's 1995 debut "A.M."

Wilco's departure from the label came as a small surprise to people in the music business. Having consistently broken even or made money with each record they made for Reprise, Wilco seemed to exemplify the merits of artist development: They had gradually built a solid fan base and seemed poised for possible stardom. Many interpreted Reprise's decision to part with the group as symbolic of an industry that seems less and less willing to wait for bands to have a hit. In an effort to understand the impact, Jones conducted interviews with rock critics and the label to put Wilco's exit in perspective, without letting anyone rail on the system.

"I wanted to make a good film that's entertaining, not some serious music industry diatribe," says Jones. "I set out to make something that gave me the feeling that Wilco records give me. 'Summerteeth' sounds like a soundtrack. It works as a whole piece, not just a bunch of songs. It really creates a mood. I wanted to make a visual representation of that. All the elements of the story came along and we just kept following it. I didn't set out to make some definitive David vs. Goliath film."

After shooting a Wilco tour in June and footage of their performance at the Taste of Chicago festival on July 4, Jones thought the filming portion of his documentary was complete. Then guitarist Bennett left in August, in part because of a disagreement over the way the album was mixed. Jones decided to go out on the road once more to capture a reconfigured lineup that now features Tweedy, bassist John Stirratt and the new members, drummer Glenn Kotche and keyboardist Leroy Bach (who'd been an unofficial member of the band for years).

Now deep into the editing process, Jones hopes "I Am Trying to Break Your Heart" can transcend an audience of eager Wilco fans and connect with a wider demographic. "With a documentary, the harder test is to have someone who doesn't know anything about the subject go watch it," says Jones. "Take a 52-year-old schoolteacher housewife: If she can be interested, great. What I hope I can do is take someone who's never heard of Wilco -- a casual CD buyer who turns on the radio and likes a Natalie Imbruglia song -- and to capture their interest."

Wilco offered Jones almost complete creative control of the film while retaining the right to approve unreleased music. The band had been impressed by his photography portfolio, and didn't think cameras would inhibit their ability to work. "When we're playing I shouldn't be thinking about anything else and in general I'm not. I totally forget that the cameras are there. Interviews and things like that are harder when they're talking to you directly. Obviously it's a tougher thing to not be self-conscious. There was really not that much that bothered me about it. It was obviously a very eventful year he chose and maybe it's his fault," Tweedy says somewhat facetiously. "Maybe it's the law of you can't observe something without changing it."

Colin Devenish writes for a bunch of people. He lives in Venice, Calif.