Jeff Probst is not an idiot

The weather-beaten host of "Survivor" talks about his debut indie film, "Finder's Fee," and why no one takes him seriously. 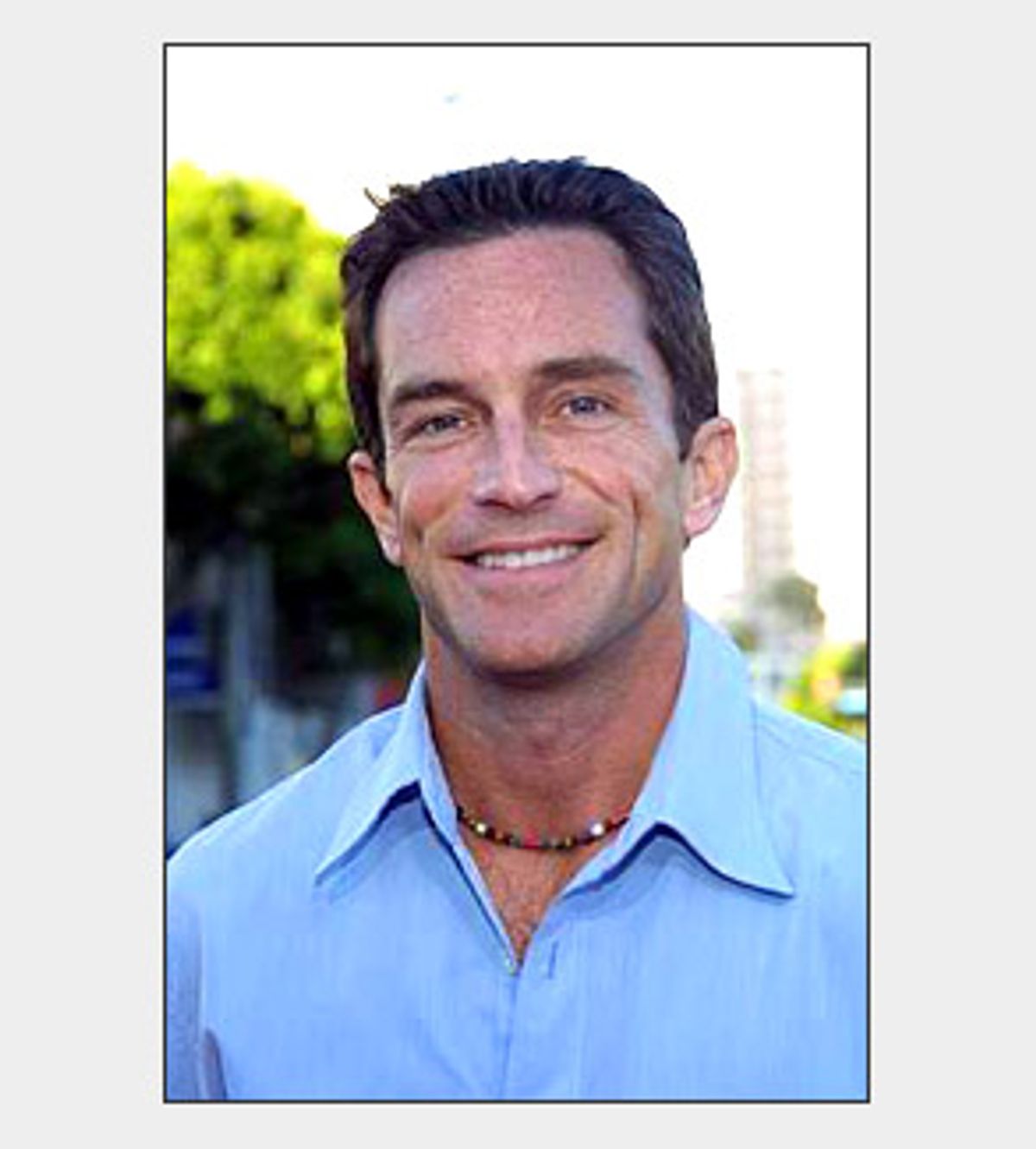 Jeff Probst, the beefcake host of "Survivor," is more than a weather-beaten brow, a pair of neatly pressed khakis and a smugly knowing grin. He's an independent film director.

Probst's debut as a writer/director, "Finder's Fee," is currently touring the independent film festival circuit, and it's a genuinely enjoyable film. "Finder's Fee" debuted at the Seattle Film Festival last spring, where it won the top award; it played again at the Sonoma Valley Film Festival in mid-April, where Probst won another award for being a "breakthrough director."

The movie tells the story of a broke guy in his 20s who discovers a wallet containing a winning lottery ticket worth $3 million and has to decide what to do. It features name actors like James Earl Jones and Robert Forster and is deftly written for a first feature. And even though the film was written and cast before Probst began working on "Survivor," "Finder's Fee" bears a certain resemblance to the TV show: Both ponder what happens to morals and integrity when confronted with large quantities of cold, hard cash.

In person, Probst is a good-natured, down-to-earth kind of guy with a peeling nose (thanks to all those sunny days in exotic locales) and a quick smile. And while he really, really wants to be taken seriously as an artist, he also possesses a sense of humor about the strange tension between being both a campy celebrity TV host and an indie director struggling to get film distribution. Salon caught up with Probst in Sonoma, Calif., and chatted with him about film world snobbery, the value of honesty and why Rudy really should have kicked Richard Hatch's butt.

What were you doing in the days before "Survivor" and "Finders Fee"?

I basically started out in Seattle doing a local gardening show sponsored by a hardware store; really, it was a paid informercial. I sent a tape to an L.A. agent; six weeks later, I was living in New York working for FX networks, which in the beginning was a live network with a bunch of talent. I did that for a few years, and then "Access Hollywood" when that launched. Then I did "Rock 'n' Roll Jeopardy" for VH1.

After that, it was 18 months until "Survivor." I turned down nine jobs over 18 months, hoping for something better. Money was getting pretty low, I wondered whether I'd screwed up, and one day I heard Mark Burnett on the radio say, "I'm going to put 16 people on a deserted island and force them to live together." I was the first person to meet with Mark. He spent an hour and 45 minutes telling me why I didn't want this show, that I couldn't handle it, that I was a studio boy. I spent the last 15 minutes basically on my knees, ripping up my résumé and telling him not to count me out. He listened to me, said, "Thanks for being honest." And I thought, Kiss of death, I'm done.

I didn't hear anything for three months, and then I got the job.

Were you an outdoors kind of guy before "Survivor"?

No. Of course, I lied to Mark. "I grew up camping! Are you kidding? I'm from Kansas!" Then I realized that you don't camp in Kansas. But I think Burnett bought it.

I'd seen "Eco-Challenge," and I knew "Survivor" was going to look fantastic, and I was pretty sure that 16 people on an island forced to live together would be interesting. I didn't think it was going to be a hit, but from the very first hour of the show -- when Richard Hatch was sitting up in a tree in a power position looking down at everyone and saying, "We need to talk about this," and Susan Hawk walks by and says, "I don't know where you're from, but where I'm from we work while we talk" -- from that moment, I thought, Oh shit, this is really going to be interesting.

"Finder's Fee" was green-lit that first day of shooting.

So where did "Finder's Fee" fit in with all this? When did you decide you also wanted to be a director?

There's a natural assumption that because I'm now the host of a popular show that I suddenly got this movie dropped in my lap. But I'd actually been writing since 1994, going through screenplay books and trying to figure out structure. When I moved to New York with FX, I got into a writer's unit with an amazing instructor. In New York nobody talks about how much money will it make, and who will be in it: You talk about theme and character and structure.

I was working as a writer, and my goal was -- and still is -- to write first, direct my own stuff whenever possible and control my own creative destiny, ultimately.

Is your long-term goal to be more of a film director than a TV host?

Long-term, yeah. But I'm not one of these guys who says, "Now I'm on a really hot show, better quit soon before I get labeled." That's the most ridiculous notion I'd ever heard.

How has being affiliated with this enormously successful but somewhat campy television show affected your credibility as a director? Have you encountered a lot of snobbery?

When I first started trying to get funding to get "Finder's Fee" made, "Survivor" wasn't even happening yet. The film's producer said, "When I tell people who you are, I already have to tell them you're a first-time writer and director; I'm not going to tell them you're a TV host, too." It was a big thing for me to hang on to directing at all, having no experience. And then when you tag it with "he's a television host," people do think you're an idiot.

But the roles of TV host and independent film director do seem somewhat diametrically opposed.

That's the funny thing about "Survivor" -- it's an unscripted show for everyone, myself included. It's an organic process that's based strictly on theme: This is the theme of the show, certain tenets are always going to hold true, but within that box anything goes. So, to me, it's storytelling. When I'm out there I know what my objective is in terms of telling the story. If there's one person that I want to highlight, I try to subtly draw them out and then get out of the way. You're sort of directing, in a way.

Tribal Council now is Mark and me, 10 minutes before Tribal Council saying, "What should we talk about?" Let's talk about trust tonight and see how it impacts the game. Then, it's like a journalist's or therapist's job: You just go exploring. Everyone wants to talk, you've just got to find a way to get them to talk.

Speaking of people who like to listen to themselves talk: "Survivor: The Australian Outback" contestant Jerri Manthey's also in a short film here at the Sonoma Film Festival, a short called "Destiny" about a woman who has an abortion.

I know. The director came up to me at another film festival I was at in L.A. and afterward told me she was thinking of casting Jerri in a short. I said my take with Jerri is that what you see is what you get; and you know if that's what you want.

Do you see parallels in the themes in "Survivor" and "Finder's Fee"?

In "Survivor" and "Finder's Fee," specifically, it is about what you would do if you could get away with it. "Survivor" is about your own integrity and where you draw your own ethical and moral lines. There are no rules: In that sense, "Survivor" is like rock 'n' roll -- you can do what you want. After the first "Survivor" I came back and was doing a rewrite on "Finder's Fee," and changed the ending after watching what happens to friendships when trust is destroyed.

There are guys out in the island right now in Marquesas that audience members hate because of the way they are playing. And we tell them that's OK. There are no rules: If you are a lawyer and you come on "Survivor" you can tell people you are a truck driver, or that you have been married 12 times and have had tough times with relationships. But no one has done that yet: No one has come out and played a total lie. People give it up too soon.

Are there any "Survivor" contestants you wanted to win that didn't?

I don't not wish that Richard won, because he was masterful, but the only time I was really pulling for someone to win was Rudy. I loved the story of a 72-year-old military, homophobic, sexist, racist, lovable -- emphasis on lovable -- man, going from this guy who everyone at first was, like, "Get this sonofabitch off the island," to "Oh I want Rudy around." His authenticity was so genuine that you went, "I love you, you are who you are." He stood out for me. Anytime I talk to kids about who does well, I always bring that up: There's something to be said for embracing who you are.

I think that's why Richard won, and not Kelly. Because at the very end, it was a close vote, there was a lot of dissension. But after 39 days of trampling on people and backbiting, Kelly said "I hope nobody took it personally, forgive me if I was mean, it was just a game." Richard said, "I kicked your ass, give me the vote."

When I heard that, I thought, I'd vote for you. If you knock me down, put your fucking foot on my chest and spit on me. But don't offer me a hand up and say you didn't mean it. You could never beat that episode.

What are the pros and cons of having been associated with "Survivor"?

Not only do I not think there have been any cons, I think the pros have completely changed the way I live my life. Every day I get more and more honest. In the grand scheme of things, professionally it's given me huge awareness with the industry and the public, which only translates into a longer career and more money if you don't screw it up. I actually feel like in spite of the first seven or eight weeks when every reviewer wanted to vote me off the island, I'm optimistic enough to believe that now people actually get that I understand that "Survivor" is tongue-in-cheek -- I was there putting my own tongue in my own cheek. I feel good about the work I do on "Survivor," and am proud of my contribution.

Do you think your "Survivor" fame will help sell "Finder's Fee"?

Nope. And I was actually surprised; I thought that because of the popularity of "Survivor," I could do so much press to promote and go to every city. But there's still a stigma: You got a little movie, you're the host of a TV show, there's no way to blend those two worlds. I think they are wrong, and we will prove that we can find a little audience for our movie. But it's a marathon, not a sprint, and I'm not going anywhere.

I've had a good run, and I will ride this motherfucker down until it crashes me on the sand. Count on it. You'll see me washed up at the beach in Malibu someday saying, well, this was fun.