George Lucas is still a virgin, and he wants his audience in the same stricken state. 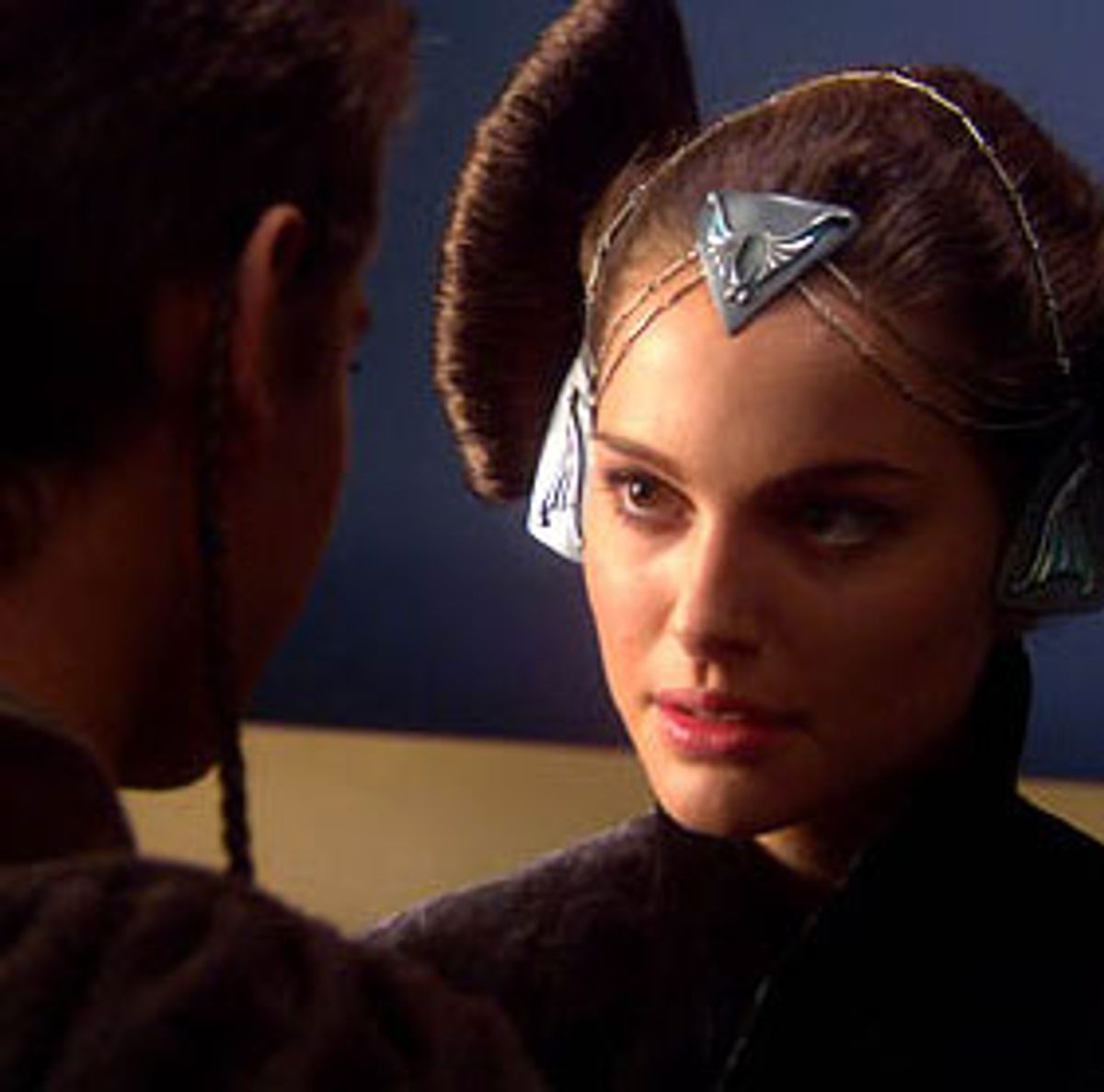 There is what may pass for a love affair in "Star Wars Episode II: Attack of the Clones," and it seems like a state of high anxiety occupying the minds and bodies of two grim, frightened children. They are Anakin (Hayden Christensen) and Padmé Amidala (Natalie Portman) -- he is an apprentice Jedi, yet a modern teenager, with dark, surly, intransigent urgings; she is a former queen turned into a senator in the dotty drive for democracy, with all the sensual potential of a girl whose mind, body and dreams have been fiercely directed toward tennis or Scientology. They are oddly like a teen couple from an early '50s movie, vaguely impelled by thoughts of sex, but unaware of the words, the actions or the hopes that might be available to them. Thus, immediately, they start talking about love and marriage -- those classic parental alternatives to desire and pleasure.

There are scenes in the new "Star Wars" movie, scenes conceived, written and played with fearful awkwardness or tension (as if the filmmakers themselves had never got past that wall of adolescent fear and ignorance) in which the light plays on Ms. Portman's exposed shoulders and Mr. Christensen's pouting mouth, where any kid in today's audience knows the code and what ought to be coming. But the movie never gets it on. Oh sure, these kids will marry at the close of the film (they have to -- we know they're destined to be parents to Luke and Leia), but their skins never close and wrestle. Somehow, in 2002, George Lucas is still a virgin, and he wants his audience in the same stricken state.

And all of this in a movie about a universe that has attained that other far more convenient, far more emotion-free form of reproduction, the one that doesnt actually involve males and females talking to each other, touching, or getting into trouble -- cloning. There are prolonged scenes in which that reproductive process is explored and gloated over. Give Mr. Lucas the possibility of millions of identical automaton bodies and he begins to get excited or eroticized -- after all, this is the computer generation, the type that really turns him on.

Am I being so unfair or unkind as to talk about the privacy that is George Lucas? No, I do not know him, and I do not mean to enlist any of the known facts about his life. I am talking about the movies he has made, and it is from them that I conclude he is afraid of women, of men and women, of sex, of pleasure -- no matter that all his artistic and commercial life he has been playing on the dreams and longings of young people in their era of pubescence. Instead, he prefers the "sexual" life of machines, robots, and those ghosts or holograms that can step out of the computer and claim to be human. This is therefore not a film that warns about clones, but one that begins to usher in their civilization. That is why it is so perfect and cold.

For surely there is a profound affinity between a kind of moviemaking that begins to do away with real people, real light, and the things that actual people used to do and replaces them with the antics of digital reproduction. How can this world of ours hope to resist cloning and its ethical dilemmas when the technology is so brimmingly available? So dont dismiss George Lucas as a mere entertainer. He is a harbinger, arguably the most significant and influential filmmaker there has ever been. How so? Because he is the exponent and prophet of forms of mechanical reproduction that could usurp the old thing -- and thus begin to rid the human race of all those awkward, embarrassing, messy emotional states it once suffered from.

Mr. Lucas would deny this -- he does often say that all hes interested in is good juvenile "fun." But he is not accustomed to introspection; he is still the brilliant kid who cannot understand his own feelings -- and who would therefore prefer to eliminate them. And nothing does the elimination better than the kinds of technical sweetness or perfection that he masters. So bring on the clones.

His young "lovers" sometimes talk about the "forbidden" thing -- the sensual self-expression that the film denies them. Nothing in the story actually explains why or how it is forbidden. Rather, the reluctance to do such things, to admit them, is in the very soul and being of this empire. It is the wish not to know such things -- to stay infantile. And so the film moves zombielike toward its conclusion and its one inadvertent hint of eros. In the marriage ceremony of Anakin and Padmé, on a balcony looking out over Lake Como at dusk (the whole thing in the childlike hues of Maxfield Parrish), the camera moves to observe one detail: the artificial hand that has replaced the limb Anakin lost in battle. And there, in its X-ray glow, lies at least one hint of a thrill -- to be stroked by that hand might be dangerous fun.