Somewhere between the penny loafers and the new Latvian stepmom, I learned that visitation doesn't always make divorce easier to swallow. 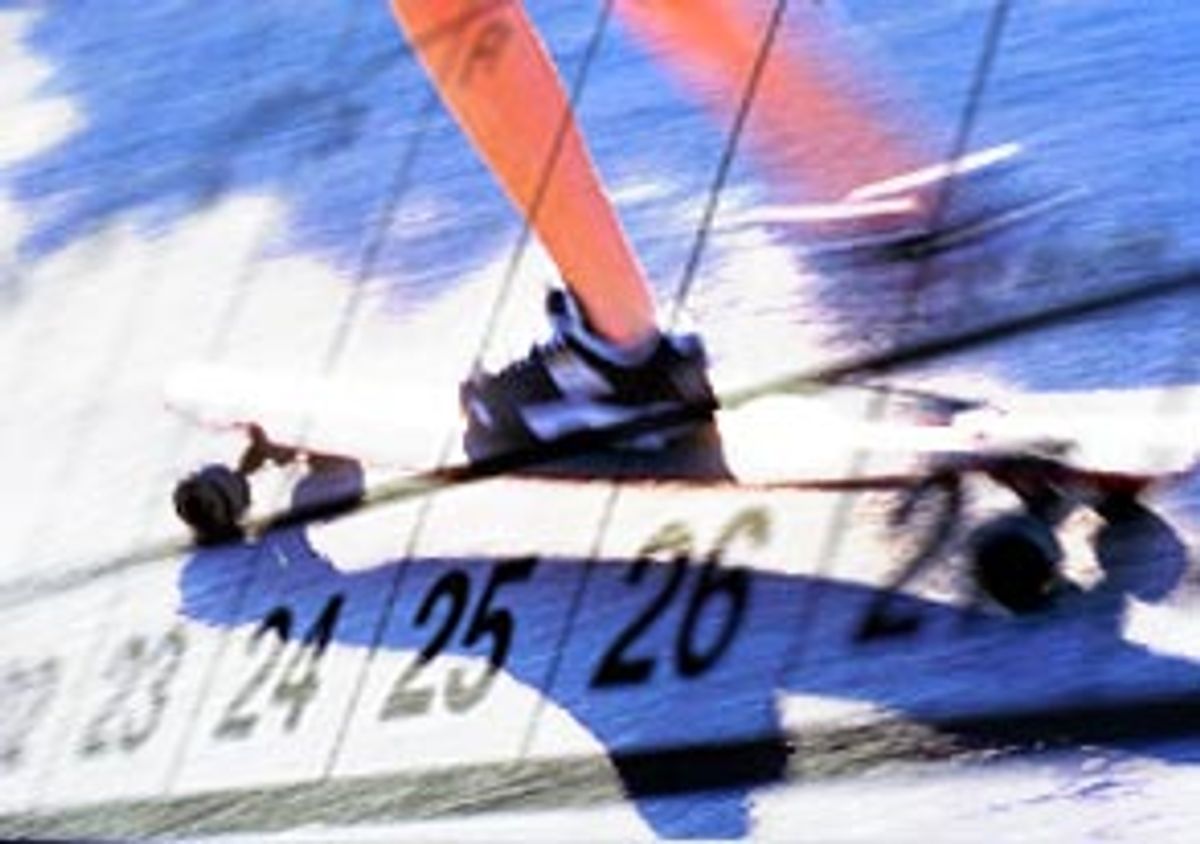 Every Friday evening, the new wife handed my brother and me shiny penny loafers, folded argyle socks, creased chinos with new leather belts and skin-hugging turtlenecks. Each time this happened, I felt ashamed of my comfortable blue jeans, T-shirts and sneakers that my new stepmother would take away to some hidden closet. Sunday evening we would change back into our old clothes, and would then be returned to our mother.

Our new stepmother was from Latvia, my dad said cheerfully, as if that explained something. The word Latvia to a city kid who only knows a few square blocks of back alleys and vacant lots in his neighborhood has the same meaning as the word "nihilism." I fished around in the small pool of knowledge I had learned within the Chicago Public School System for some sighting of Latvia, but when I came up for air my net was empty.

Almost 40 years later, I can still picture the scene that fateful Friday evening when Dad broke the news of his second marriage: the three of us walking west down 55th Street, just past the Hyde Park Shopping Center, in front of the two towering apartment complexes dividing the street, the University of Chicago gothic maze to the south and the always present menace of violent street gangs -- the Blackstone "Peace" Rangers and Disciples -- lurking around every corner. I carried a toothbrush, medications, baseball cards, Tom Swift books, marbles and a change of underwear in a paper sack.

Everything was normal for the first few blocks, the usual awkwardness surrounding us as we scrambled to reach some sense of normalcy, knowing at the same time that the every-other-weekend visitation was a perversion of family. Then my father told us he had married since we last saw him two weeks ago. He said it in a casual manner, as if announcing the weather for the weekend. I recall the slowing of my pace, my heels digging into the pavement, and that shocked feeling of waking up badly from a heavy dream, a loss of equilibrium. All around me the known configurations of my narrow 8-year-old world were coming apart, breaking up into pieces of useless cargo that would have to be jettisoned.

I knew I had failed somehow. I realized I would have to adopt ever-more clever strategies of protection against the unreliable adult world, because obviously the ones I had in place -- silence, withdrawal, television, solitude and constant conversations in my head with a man I called "God" -- had not been successful. For if my defenses had worked, I would not be on my way to spend the weekend with a strange woman from Latvia, wherever that was, who would dress me in new clothes that smelled of ticking and starch, who drank something called wine and who didn't have the slightest idea what it took to have me stand in front of her and pretend to be normal.

Up to this point in the court-mandated visits, our weekends consisted of long walks and endless rides on public transit. We would travel with our box lunches of cheese and bologna sandwiches and Jay's potato chips to places like Lincoln's Tomb in Springfield on the Bluebird bus out of Chicago's Randolph Street terminal. I can't recall the exact continuous glob of nothing that ran through my brain during those weekends, but I do remember a constant sensation of uneasiness brought on by the long ride so far from my South Side neighborhood. Betrayal was also a feeling I remember, because I believed that, even though legally I had no choice but to go away every fortnight with my father, I was disloyal to my mother in doing so.

To escape a chance meeting with my mother and to educate, Dad took us by bus and train and foot on local trips: to South Bend, Ind., the last stop on the Illinois Central, a place so foreign that we might as well been in Paraguay; to museums with dioramas with magic buttons that when pushed activated disembodied voices that knew everything I didn't. Instead of going to baseball games or movie theaters -- lively venues I imagined other boys went to with their dads -- we toured historic forts with defunct cannons and drama students from the local colleges dressed like members of the French army; and, to Savanna, Ill., because, I guess, it was the last town before the Mississippi River -- the edge of our known territory. We would arrive, find a historical marker to read, pick up a brochure or listen to a local interpreter explain why the Native Americans buried their dead in mounds. Then we would turn around and journey back to Chicago.

During those 48 hours, Dad held our small hands in the wind and the humidity and, with a minimum of conversation, we hiked urban landscapes measured in city blocks and mapped out in transit stops. Sometimes we saw newsreels in an old movie house in the Loop, or went to a tiny zoo in Indian Boundary Park on the north side of the city.

I tried hard never to complain. When you are little, you have no choice but to hold on tight to the nearest adult and try to keep up with whatever pace is set. You move forward never knowing that the memories you are accumulating will someday come back to visit you at the oddest moments. You acquire your survival skills at an earlier age than the kids from the nuclear families. You grow an extra layer of skin. You fake and pretend. And you learn all this quickly, or you simply go mad.

Everything was foreign in the new apartment with the Latvian wife, who smiled and laughed too much. Our bedroom was too clean, too sterile. Nothing that suggested our existence -- White Sox posters, our Lionel train set, our familiar blankets and pillows -- was evident. There was no television, a mainstay at our other apartment. A hi-fi played classical music on low volume day and night. An obese dictionary, the kind I had only seen in libraries, sat front and center in the living room, a subtle hint to my young mind, I suppose. Paperbacks and cloth covers spilled off the shelves, the combined impressive literary accumulations of Dad and his educated bride. Some of the volumes were in a foreign language. (All I knew besides English was Pig Latin, which I used on my enemies.)

I don't remember what we ate, but it wasn't Mom's pigs-in-a-blanket or her minestrone soup. The food was ethnic and smelled funny. On Christmas, our gifts were nestled in the branches of the evergreen, not under the tree like at home. And my gifts were not the latest board games, but a set of Dr. Dolittle books. My familiar world of comics, "Combat" episodes and stickball in the alley seemed so far away. The weekends suddenly felt like a prison sentence.

Employing my well-tested "survival for young boys in visitation situation" techniques, I adapted. I was a kid, after all, and I was going to have fun no matter what obstacles were placed in front of me. I put on the starched clothes that made me itch and pretended I was the Man from Uncle. I put pennies in the loafers. I read every Dr. Dolittle book in that lofty canon until I was the good Doctor, rescuing camels and other exotic animals from unknown regions. I discovered that I can eat just about anything, a realization that has stood the test of time and diet. I would even listen to the horrid "Ring Trilogy" by Wagner and engage the Latvian in what I thought was clever analysis.

I leafed around in the dictionary until I found that Latvia was in the USSR, which was our enemy in the 1960s. Hmm, maybe my father had got himself mixed up with a communist spy? Was she part of a pioneer sleeper cell? This delicious idea went along with my addiction to Hardy Boy mysteries and actually made the weekends more pleasant as I snooped around the garbage cans and inside "secret" drawers for incriminating clues and damning evidence. This was a complex caper! Who knew how many people were involved and what dangers lurked in the closets! Maybe my brother was in danger!

"For the time being, Frank kept the fact of Joe's disappearance from his mother. He knew she would be greatly worried, distracted, in fact, and he wished to make one last effort toward locating his brother before breaking the news."

The Latvian and I never grew close. Besides, I already had a mother, and a great one, who knew how to cook my favorite meals, who would take me clear across the city to see "Mary Poppins," and who played good-old American folk singers like Pete Seeger, Phil Ochs and Judy Collins on our scratchy stereo. My heart only had room for my mother.

Nor did I need a special friend. All of my pals traded baseball cards with cunning business savvy. They knew all the lyrics to the latest Chad and Jeremy hit, played war games in Jackson Park and watched "Wild Wild West" on black and white televisions. No, if the Latvian wanted sons she would have to make her own. A year or so later she was pregnant with the first of two kids. My dad and the new tribe left for New York not long after. My life immediately improved.

Will there always be a false nature to the every-other-weekend arrangement? Is the disruption in the child's and the parents' lives worth it? I'm not sure. The time spent is often surreal, created by a truncated time frame bursting with heightened activities. Dads can become sugar daddies, whisking their brood off to Six Flags, or a Britney Spears concert. Behavior on everyone's part is often feigned or unnatural. I don't know an alternative except to lobby for more time for the kids with divorced parents, especially with the dads -- if they want to, that is.

At times I fought against going and I would be in tears when my father arrived to take us away. It occurs to me now after my own divorce and custody battle, what a disruption weekend visitations are to the adults, too. Nudity is no longer an option. Forget making love on the couch on a Saturday afternoon. Keep the bathroom door closed.

In hindsight and, more precisely, following my own marital collapse, I understand why my parents divorced. I don't need a therapist to guide me toward an explanation. Mom and Dad were just a couple of young kids from Iowa farm towns who tried their luck in the big city. They learned they were incompatible. While they were together they had two sons, who, despite and because of their parents' best efforts, survived their childhoods. And at least one of them is better for the experience.

Stephen J. Lyons is the author of "Landscape of the Heart," a memoir of single fatherhood. He lives in Washington state.This week he received a rejection letter that described his writing as "unfocused and full of broken glass." It actually made him feel good.