Photographer Mel Roberts, once called the "Hugh Hefner of the gay world," liked to pose cute little surfie boys flopping out of their flower-power hip-huggers and cutoff jeans. 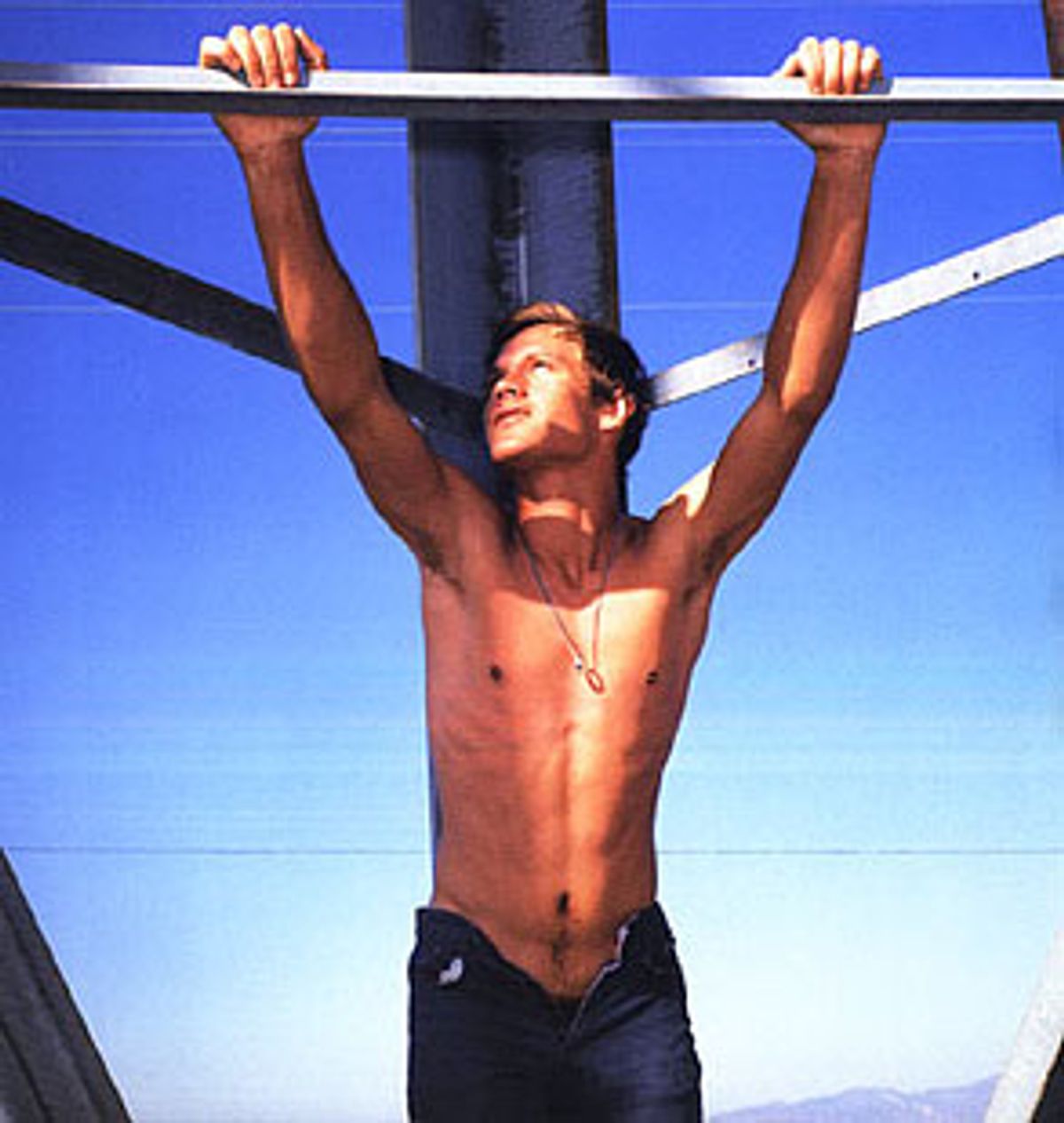 Picture surfers, bikers, hikers, rockers, stoners, skateboarders and wrestlers -- all seemingly fresh out of some L.A. high school. Or maybe they're on summer vacation before senior year. It's warm and sunny, and they're in and out of their cutoff jeans, chaps or flower power hip-huggers. They show off their tan lines, bright white bubble butts, love beads and op-art towels. They're beefcake by the backyard pool, on those zippy zebra-print sheets, or leaning on an overpass grating on Mulholland Drive overlooking a quaintly unpopulated 405.

It was, after all, 1969. The freeway traffic was still manageable and the sun-bleached oak and chaparral of Malibu Canyon had yet to become gated communities of prefab housing developments with vaguely European names.

It's Mel Roberts' territory, and the California boys who populated it, in an age before queer was codified, are all his. He captured the wholesome-looking guys with recent sprouts of chest hair, and the pimply blonds who could have grown up to be Leif Garrett. The pop-idol fate may have been the same, some tragic drug thing washing away the good looks, but in one of Roberts' photos, the fresh influx of testosterone eternally strikes a perfect balance of smooth skin, taut tummy and a sense of adolescent sexual adventure.

At 79, Roberts is now able to relive the glory of those Coppertone days. His all-male pictures are old enough, and reflective of an era that today seems blissfully awash in unfettered pleasure, to be relevant once again. The images have been compiled into two volumes, "California Boys" and "The Wild Ones." These books (as well as related notecards, calendars and slide show videotapes) give off the sunburn heat of wholesome, pre-condom era homoerotic fantasy.

"I was a motion picture cameraman in the '50s, graduated from USC," a spry and jovial Roberts says during a recent phone interview from his home in the "slums of Bel Air." "I took up a still camera and was trying to think about how the pictures could be done as a movie." That meant working the standard practice of starting with a long shot and moving in progressively closer. "I would start off fully clothed and show them in different poses, revealing what everyone wanted to see."

Roberts carved out his legacy in the commercial realm of erotic "male photography." His work of the 1960s takes the tradition of gay physique photography of the decades preceding him to its next logical level, to a place created by a developing sense of sexual freedom. While the muscleman images of the 1950s Athletic Model Guild magazine were more coded, cloaked in skimpy posing straps intended to suggest a serious, artful appreciation of the male form, not -- god forbid -- titillation, the California boys exude an appealing, slightly kitschy sexual ambiguity that comes from their era. They're young guys who have fun in the sun any way they can in a time encompassing the advent of free love and, later, hot tub sex parties.

And Roberts, who in photos of the time resembles Tab Hunter, was definitely in on the action. One of the mythologies attached to these pictures is the photographer's admission, in the introduction to both books, that he was friends and lovers with many of his models.

"That's what makes the pictures work," he says. "Before being in front of the camera, they knew me and felt comfortable working with me. I always paid the models, even if they were friends. They could buy more weed or whatever."

So how many of them did he sleep with? "I had sex with most of them," he says. "In most cases, I knew the person so well, I'd strip while taking the photos. Whatever happened, happened naturally. After I got all the pictures, we'd finish the job, so to speak."

Roberts was usually a good decade or two older than his models, less than half of whom were gay. "They liked women, too," Roberts recalls. "They had no prohibitions, no guilt about having sex with guys. Most of them had girlfriends. I always say, the best way to destroy relationships is to put prohibitions on them. You can't stop nature."

But one must be reminded there was a different sense of sexual freedom to the time. "It was pretty open back then, especially if you used drugs and went to love-ins," Roberts remembers. "Those were wonderful places to meet people -- thousands of people grooving on each other, listening to music and getting high. There was sexual freedom, no one challenged who you were sleeping with. Never been an event like that since then."

Roberts' own lifestyle seemed to groove on that freedom; he shared his Bel Air house, on the funky side of Reagan's neighborhood, with various "roommates." "One writer called me the Hugh Hefner of the gay world," he snickers. "I've always had four or five guys living with me at one time. One would be a lover and the others would often just join in. There were always good drugs and good music."

Apparently they were strong enough for the LAPD, which twice in the late 1970s and early '80s, raided Roberts' home/studio and confiscated his negatives under the pretense that he was trafficking pornography. "They took everything -- negatives, equipment, my mailing list. They effectively put me out of business for a year while they tried to figure out how to prosecute."

They never did. Still, the raids seemed to set in motion a prolonged downward spiral -- his travails were blasted all over the papers: "Pornographic Raid on Mel Roberts home" -- and he was asked to remove his account from the Hollywood bank he had used for years. "Then the strangest coincidence was that in 1981 the AIDS crisis began. It was almost providential," he says. "I just put my cameras away and forgot about them. "

Clearly he felt burned by the police experience and spooked by the advent of HIV. He got by on money he'd saved, sharing expenses with roommates -- friends, lovers and former models -- and nursed his ailing father. He didn't, however, miss taking pictures. "I was settled down and not meeting new people. I felt I'd been there and done that."

It was also a new world order. "I was talking to a younger photographer the other day who asked me, 'Don't you think there's a lot more freedom today?'" Roberts says. "I responded by saying, 'How can there be freedom when you can die from having sex?' That's not freedom in my book."

Work like Roberts', however, exists in a sexual subculture, so it was only a matter of time before his pictures were rediscovered. To those of a generation or two removed, the pictures seem completely fresh and endearingly free of cynicism. (One thing that oozes from the photos is a sense that the photographer was having a very good, not sleazy, time.) At the urging of younger gay photographers, Roberts exhibited pictures here and there, quickly gathering new audiences and more mainstream success.

"Elton John bought 52 of my prints," he says proudly. "I haven't met him, but I want to tell him that all the people in my books grew up with his music. They were his fans from the very beginning."

The two books, from the campy, love-bead nostalgia of "California Boys" to the flagrant erections of "The Wild Ones," have also helped to spread the love, of which there is plenty. "I have an immense archive," Roberts boasts. "I worked over a 20-year period and sometimes I shot six rolls per sitting. It took us three months, looking at pictures for several hours every day, to compose the first book. I'm going through now for a third book, which will be the raunchiest of the series."

While working with his old pictures, Roberts wasn't even tempted to pick up his camera. Long Nguyen, photo editor at Flaunt magazine, had to nudge Roberts to consider a fashion shoot, revisiting the sites he used back when. "I turned them down the first two or three times," Roberts admits. "Finally the editor called me personally, said, 'It'll be good for your prestige.' I agreed; they let me pick out the models from an agency -- I chose guys with '70s hairstyles." He chuckles as he says the magazine gave him 100 rolls of film for the shoot, but he only needed eight to get the designer beefcake layouts that appeared in Flaunt's March issue.

Approaching his 80th birthday, Roberts is healthy enough not to need any medications -- proof that sex prolongs life? -- but he doesn't feel as sporty as he did when he hiked down beach canyons for a good location shot. Still, he'd entertain thoughts of more work. "I know my roommate took a call from Versace," Roberts says. "If it's an attractive offer and it's not too strenuous, well -- I'd consider it!"

We could always use another California boy.