Iraq's economic collapse means the oldest writing in the world can be bought for a song on eBay -- and has scholars racing to digitize Sumerian artifacts before they become paperweights. 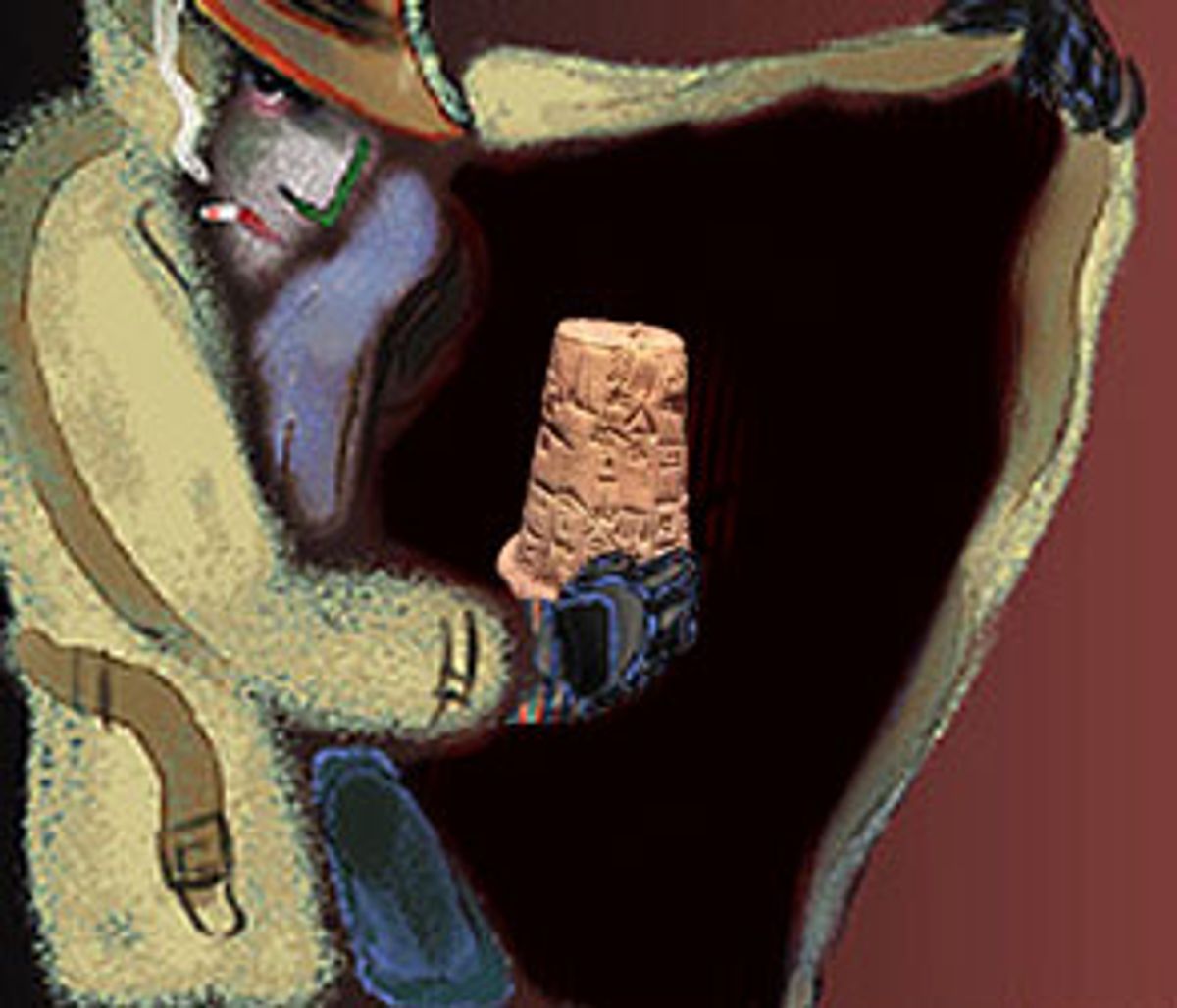 The history of writing is for sale on the Internet, and it's cheap.

The opening bid for a cuneiform cone that allegedly hails from 2000 B.C.E. starts at $1. A square tablet recording a sale that took place more than 4,000 years ago of a sheep, or maybe some grain -- it's a little hard to read -- well, that receipt will set you back less than $10.

Every day on auction sites like eBay, the artifacts of the ancient Sumerian world -- some of the earliest examples of human writing -- are being sold off like so many mass-produced Tinkerbell tchotchkes. And these tidbits of the past are shockingly inexpensive: for less than a 1960s Donald Duck pinwheel from the Mickey Mouse Club, history plunderers can purchase their very own treasure.

Are these all patent fakes? Made of clay that hails not from ancient Mesopotamia but from contemporary Albuquerque, chipped and scuffed to look "ancient" to suckers eager to buy a trinket from the past? Or are there so many of these hoary artifacts flooding the antiquities market that authentic cuneiform on clay really has a lower fair market value than plastic Disney Americana?

Robert K. Englund, an Assyriologist and Sumerologist at the Department of Near Eastern Languages and Cultures at UCLA and a principal investigator on the Cuneiform Digital Library Initiative, says that many of these artifacts are real, but he wouldn't recommend buying them.

Even a cursory look at the images of those artifacts by a scholar of the ancient languages of Sumerian and Akkadian, like Englund, reveals that they are probably authentic. Rogue forgers don't usually bother to spend the years it takes to learn cuneiform before they chisel their fakes, and copying from photographs of an original is harder than it sounds. Glancing at a dozen images of cuneiform objects being auctioned on a recent day on eBay, Englund spots only one likely fake. And these days, there's almost always some cuneiform up for bid.

But while these cuneiform artifacts may be real -- actual writing from millennia past -- that doesn't make them clean. Many of these treasures are cultural fallout from Iraq's geopolitical isolation since the Gulf War brought on U.N. sanctions. Since the early '90s there's been a flood of cuneiform artifacts onto the international antiquities markets, some probably pilfered from archaeological sites, others lifted straight out of regional Iraqi museums.

"Everything is coming out of Iraq these days -- statuary, cuneiform tablets, cylinder seals," laments David I. Owen, a professor at the Department of Near Eastern Studies at Cornell University.

Bidding at auction for that tantalizing tablet puts you at risk of trafficking in hot antiquities. "Much of it is certainly material that's resulted from illicit excavations since 1990," says Englund. "The government controls all excavation sites, but the war there resulted in the collapse of security." The regulations that do exist against exporting such cultural artifacts simply aren't enforced. And the amount of looting that's taking place makes some scholars suspect official corruption as well as outright theft.

"Given the quantity of material that has come out of the country," says Owen, "it's hard to imagine that this is happening without the cooperation of border guards."

An impoverished and isolated country is selling off its ancient history on the black market. The beginnings of civilization are surfacing only to disappear from view into private collections. But in a truly odd twist of fate, one of humanity's newest forms of communication, the Internet, may be the key to preserving the oldest of written words.

To collectors and novelty seekers looking for trinkets from the past, the sell-off represents a great -- if morally questionable -- boon. Bargain hunters alert! Rock-bottom prices for your own piece of the past! But to scholars of ancient Sumer the upsurge of availability has created a sense of urgency in a rather sleepy field. Can a record of these artifacts be captured and documented before they disappear into private collections forever?

"You don't want this stuff to end up as paperweights on someone's desk," says Owen. "They're so common today, I've found them in garage sales."

Reputable museums around the world have agreed not to buy up and "save" treasures likely to be hot. A 1970 UNESCO convention has tried to stem illicit trafficking in the import and export of cultural objects, with 92 states agreeing to return cultural objects shown to have been ripped off from other countries since then.

Translation: The great cuneiform museum collections outside Iraq collected by looting American, French, British and German colonialists in the 19th century will remain intact. But items discovered by excavations after 1970 that weren't on the up-and-up with local governments are contraband.

Paradoxically, this hasn't curbed the market for stolen treasures -- it's just redirected the treasure into private collections, creating archives to which scholars don't have access. So who knows whether those objects were excavated in 1910 or illicitly in 1999?

"If you know that you have got a stolen good, then you are committing a crime, but it is hard for anyone to know that, and probably most people don't want to know whether that is the case or not," says Englund.

The contradiction is galling. Many of these Sumerian artifacts may be discovered only to have their meaning lost. The rush of objects out of the country in the past decade has meant a race to try to record their existence before they disappear into obscurity again. "It's something like an island that has emerged from the sea for a short while," says Englund. "You want to make very good records of this material because it will sink into private collections, where you won't see it again. A lot of unbelievably exciting material has been made available to us through illegal operations inside and out of Iraq through the tablet trade."

Englund and his colleagues at the Cuneiform Digital Library Initiative have actually captured images of these artifacts for posterity right off sites like eBay.

The scholars may never see the object as it passes from some British antiquities dealer to the fireplace mantel in a computer programmer's living room in Boise, Idaho. But it will not be totally lost.

The scholars who devote their lives to deciphering these texts don't fully begrudge the Iraqis who might be raiding archaeological sites. Englund, who says that he would never buy such a "dirty" tablet, adds that he can understand why they're being sold: "I would want to feed my child any way that I could."

The study of ancient Sumer seems an unlikely field to be transformed by a new technology. To call it specialized is to put it mildly. It's simply a tiny field. According to Englund, there are maybe a thousand individuals in the world with any passing knowledge of the relevant languages, and only 200 positions in universities on earth devoted to Assyriology.

Scholars who devote themselves to translating and interpreting cuneiform tablets have long favored old-fashioned 3-by-5 or 4-by-6 index cards and pencils as their primary tools.

An Assyriologist parsing an early cuneiform tablet at the Yale Babylonian Collection or the Hermitage would copy the words on each tablet by hand, writing a transliteration in Latin characters of what it said on the same card, noting the relationships between words and characters. It's a process much like creating your own index-card dictionary.

Photographing and publishing images of the tablets was prohibitively expensive, given the small potential audience. So usually only tracings or drawings of the tablets saw publication in academic books and journals, when they were published at all. And the print runs for those publications averaged 200 to 500 copies, so they quickly went out of print.

Over the decades, legendary scholars would amass thousands of index cards in their personal collections, piling up hundreds of them in their university offices, their handiwork and documentation accessible to themselves alone and maybe a few students. It was a monastic existence with a scholar passing down his knowledge of the language and culture to a few students who might carry on the tradition.

But romantic as this sounds, the form factor of index cards made cross-referencing one's own work, much less sharing it with other scholars, a challenge. Sometimes the scholars' work literally died with them.

"There were some famous file collections," Owen recalls. "Enormous collections of files. Unfortunately, a lot of them were lost when the professors died. Sometimes the families trashed them. There were some pretty grim stories about people whose scholarly work was destroyed -- sometimes consciously -- in a vindictive fashion."

But now that scanning technology, digital photography and the Web have lowered the incremental cost of producing and sharing an image to almost nothing, ancient Sumer is going online. Snatching images of plundered artifacts being sold off eBay is just the beginning.

"We have a collection of 600,000 file cards," says Steve Tinney, director of the Pennsylvania Sumerian Dictionary Project at the University of Pennsylvania. "But we don't look at them anymore, because we have everything online."

The Cuneiform Digital Library Initiative, which focuses on works from the beginning of writing, circa 3200 B.C.E., until the end of the third millennium or 2000 B.C.E., is in the process of digitizing the early cuneiform collections of the Vorderasiatisches Museum in Berlin, the Hermitage in St. Petersburg, the Louvre, the Yale Babylonian Collection and the University Museum of the University of Pennsylvania, among other museums. It now has digital records of 60,000 of the 120,000 tablets that are thought to exist from this period.

Venturing into these museums' collections can be its own kind of archaeological expedition, since many of the tablets have never been translated into Latin characters or fully categorized. They're just so many tablets in drawers.

Earlier scholars in the field concentrated primarily on the literature of the time, while most of the writing actually had to do with more mundane, but historically intriguing, financial transactions -- the sale of a sheep or some grain. "In a sense, you have to go excavate at the British Museum to bring out the old tablets that have never been published, that have been sifted through to find the literary material," Englund explains.

Endless numbers of receipts, which might bore a literary historian searching for another Epic of Gilgamesh or biblical scholars looking for confirmation of the flood story, are gold to an economic historian. They include records of the administration of very large, organized households as well as bookkeeping documents recording imports from Persia. How did the labor market value grinding grain vs. fishing in 3000 B.C.E.? The tablets know.

It's been understood for decades that going digital might help interpret these masses of financial data from history. The attempt to computerize cuneiform began as early as the late '70s at the Max Planck Institute of Human Development in Berlin, where computer punch cards were used to record about 2,000 transliterations of proto-cuneiform texts. Those punch cards are the roots of the Cuneiform Digital Library Initiative.

Assyriologists hope that the new digital archives and dictionaries, online collections of images and documentation that now number in the tens of thousands, will open up their field, if not to laypersons then to other scholars in fields such as economic history. Allowing the data from the documents to be studied and analyzed in the aggregate could lead to new discoveries about how the ancient society functioned.

"With a large number of receipts, it's hard to make sense of any particular one," says Englund. "But if you put a lot of them together, you have something like a monthly statement. Then you can see why you were losing so much money!" It's a whole new way to read the plumbing receipts circa the third dynasty of Ur, despite what's being lost forever to the economic and political realities of the present.