The shame of the pro-Palestinian left

Ignorance and anti-Semitism are undercutting the moral legitimacy of Israel's critics. 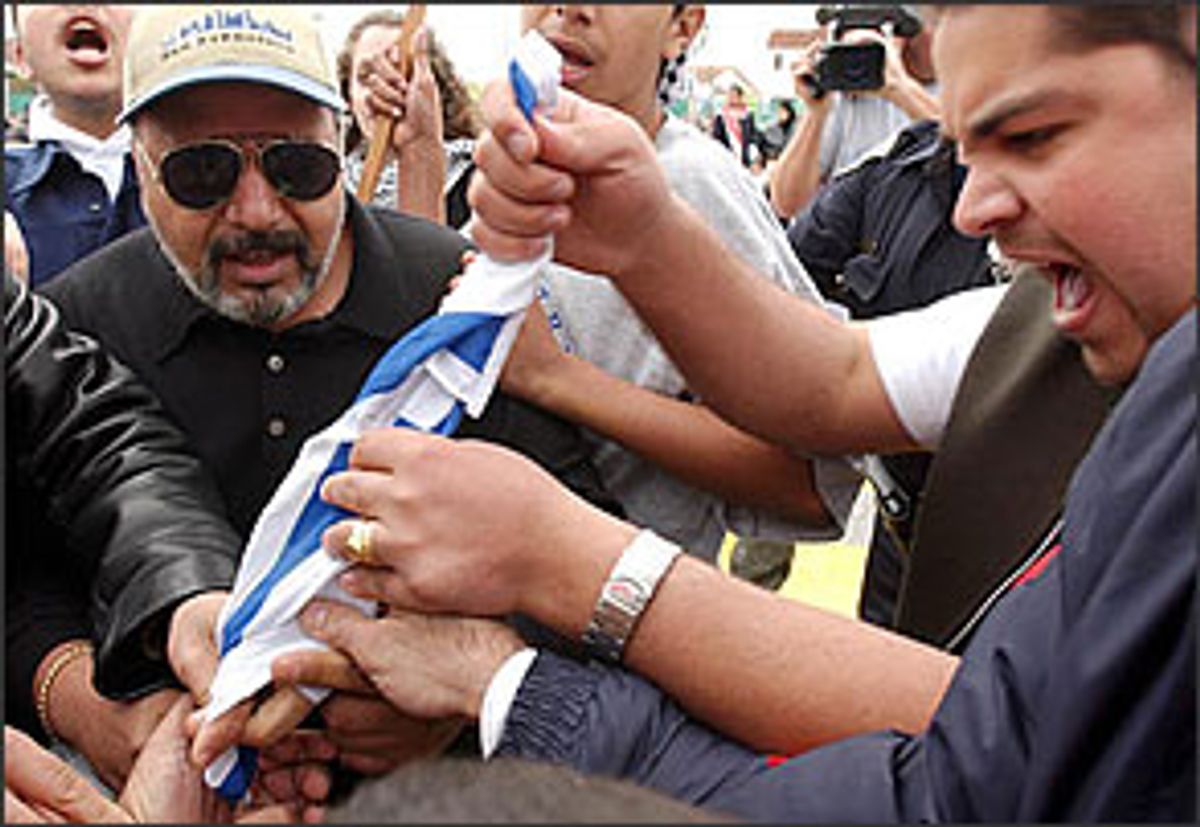 "Let's move back," my wife insisted when she saw the nearby banner: "Israel Is a Terrorist State!" We were at the April 20 Boston march opposing Israel's incursion into the West Bank. So drop back we did, dragging our friends with us to wait for an empty space we could put between us and the anti-Israel sign.

That same day, at the bigger protest in Washington, an acquaintance of mine had a similar problem. His wife was asked to hold the protest sign of a woman walking into a bathroom. "Israel Is Nazi" is what it said. His wife wasn't happy, either.

There was a lot of unhappiness that day, and not only for Jews like me.

I've long expected World War III to start in Jerusalem, sparked by those on both sides for whom God's command makes compromise impossible. On CNN I listen to Israeli settlers describe in Brooklyn accents why they won't move from their God-promised West Bank hilltop; if a peace treaty is signed, they'll fight Israeli soldiers sent to remove them. Then I read an interview with a Hamas spokesman in Gaza, who says the group will sabotage any peace that fails to transform the Jewish state into an Islamic one.

Both extremes are part of the problem. Yet too many activists on the American left, in their zeal to remedy the Palestinians' plight, don't apply principles evenhandedly. I I see three overlapping challenges facing the developing movement for Middle East peace and justice:

First, we need to know what we're talking about, and many of us don't. Like those who defend every Israeli action, too often we overgeneralize, present inadequate views of history, fail to acknowledge the range of perspectives and motives on both sides. Sometimes we pass along unfounded exaggerations. Repeatedly, we confuse slogans for arguments.

One example was our credulous response last month to the Palestinian Authority's assertion that Israeli forces in Jenin massacred 500 Palestinians. Yes, Israel has massacred civilians in the past, in actions Ariel Sharon sometimes organized or allowed -- but that doesn't mean it happened this time. Yes, Israel's rejection of an inquiry allows the claim to persist -- but that doesn't make it true.

Both sides have hid or manufactured evidence. But the plausible facts, presented by Amnesty International, Human Rights Watch, journalists and eyewitnesses, are horrendous enough without resorting to unfounded claims of a massacre. Israeli troops beat captured Palestinians; exposed noncombatants to injury and death by forcing them to guide soldiers into danger; blocked ambulances on flimsy pretexts; vandalized homes and offices; shot civilians, or humiliated them to teach them a lesson; and imposed massive destruction and collective punishment, destroying the civil institutions needed to run a society. To all this and more, our movement rightly objects.

But there is no evidence of a large-scale intentional massacre, and to claim there is hurts our credibility. Roughly 50 people were killed, another 49 are missing, according to the U.N. That's not 500. In fact, floating the claim of a massacre early and often diminished international outrage over the possible war crimes Israel did commit in Jenin. We shot ourselves in the foot, folks.

We also need to rein in our rhetoric. It's not just incendiary to compare Israeli actions to those of Nazi Germany; it's inaccurate and unfair. The Nazis' extermination of millions of Jews and other "undesirables" -- systematic, bureaucratic, scientific -- is in many ways unparalleled in human history. The point is not to say Jews have suffered most, because that's a pointless debate: Many groups have a claim on the world's shame and sympathy. Yet calling Israeli atrocities Nazi-like demonstrates either a weak grasp of history or a calculated misuse of it. Certainly, like many governments, Israel has committed unjustifiable acts: occupation, massacre, torture and more. But calling someone a Nazi implies something further: that they are implementing a comprehensive plan to annihilate an entire class of people. That's why the accusation is so devastating, and untrue.

And while more Jews have rallied to the anti-occupation cause over the last month, I believe their numbers are dampened by distaste for banners that use an equal sign to connect the Star of David and the Nazi swastika, or proclaim that "Sharon is Hitler." Those banners, and the superficiality that inspires them, are calculated to offend, not communicate, and they hinder the movement for Palestinian rights.

Our second challenge is to respond with more than lip service to anti-Jewish hatred and scapegoating. We rightly expect Jews of conscience to oppose Israeli aggression, just as we oppose U.S. government threats to Muslim civil liberties and racist attacks on individual Arabs. But we should also expect Palestinians and their supporters to reject those who blame not Israel, but "the Jews." We're appalled when some Israelis propose to "transfer" all Palestinians out of the West Bank and Gaza, a policy that would render accurate the charge of genocidal ethnic cleansing. We should be equally appalled when Hamas reiterates yet again its intention to expel from Israel all who reject Islamic rule.

Some Arab governments continue to use inflammatory language and disseminate "The Protocols of the Elders of Zion" and other hate literature. Again this spring, Arab media repeated the ancient libel that Jews use non-Jewish blood to bake matzoh. Although Palestinian schools have removed some older textbooks with anti-Jewish slurs, in much of the Arab world antipathy to Jews is commonly expressed and sometimes officially endorsed.

In Europe, reactions to Israel's West Bank actions include synagogue arsons, tombstone desecrations and beatings. A member of the British House of Lords says, 'The Jews have been asking for it and now, thank God, we can say what we think at last." Spray-painted in France, repeatedly: "Jews to the gas chambers." In Holland, chants: "Sieg Heil," and "Jews into the sea." Hate groups in the U.S., too, now use the Palestinian cause to justify Jew-hatred.

That so many Muslims believe Jews working in the World Trade Center had advance knowledge of September's terrorist assault is a problem to address, not ignore. That some supporters of Palestine won't distinguish between legitimate opposition to military occupation and illegitimate suicide bombings and other attacks on civilians -- attacks endorsed by Islamic clerics, politicians, even openly by Yasser Arafat's wife and less openly by Arafat himself -- feeds the mainstream perception that the left's interest in peace and justice is tainted.

Of course, despite Israel's assertions to the contrary, anti-Semitism and Jewish self-hatred do not motivate every criticism of Israeli policy. Claims that Israeli forces in the West Bank did nothing wrong repel even many of Israel's supporters, including 450 army reservists refusing to serve in Occupied Territory. Jewish-American newspapers like the Forward and the Jewish Advocate now report in reasonable, even respectful tones the growth of Jewish opposition groups. Even some Jews wonder, often uneasily, whether the fundamental Zionist beliefs that led to Israel's creation made the present instability inevitable. None of this makes one an anti-Semite or a traitor. But let's not make the opposite mistake. Sometimes the perception of anti-Semitism is right on target.

Our third challenge is to communicate more effectively with our opponents. Because both good and bad arguments for any stance almost always exist, it's easy to list facts justifying our position and exposing the other side's outrageous deeds. It's harder to respond substantively to the other side's list, to struggle with their best arguments rather than simply shrug off their worst. We should be ready to respond effectively and honestly when those on the other side ask, "What's your solution?"

The gulf is vast. Some blame the underlying conflict on European Jews who arrived more than a century ago and soon displaced Palestinians. Others blame Arabs who resisted Jewish efforts to escape European anti-Semitism. Fundamentally different perspectives shape the way both sides interpret historical events.

Those differences even make it hard to agree which historic facts are really factual. Was Ehud Barak's Camp David offer to Yasser Arafat generous, or simply a guarantee of continued Palestinian dependence? Let's go even further back: What did Britain intend in 1917 when it issued the Balfour Declaration? Did Israeli officials intentionally drive out the Palestinians in the 1948 war, or was their flight a largely unplanned result of the fear and destruction inherent in conflict? The position of many who support Israel -- that Arab governments enticed most Palestinians to leave -- has been thoroughly discredited by historians across the political spectrum; its frequent repetition reminds us that even demonstrably erroneous assumptions persist when they serve other purposes. The claim by many Middle East Muslims that the Israeli Mossad attacked the World Trade Center last September may attain similar status. Facts are slippery. Myths persist.

Even when talking works, it only takes us so far, because mutual understanding doesn't solve every problem. But talk is crucial if we're to clarify differences in interpretations, access to power, ultimate goals. Only then can we grapple with how to satisfy the needs of ordinary people on both sides. Under the right circumstances, communication also reveals diversity. When interaction humanizes both Jews and Arabs, it becomes harder to believe stereotypes perpetuated by those who seek supremacy rather than resolution.

Today I'm trying to feel encouraged. Even many of Israel's longtime supporters now understand that, to provide justice to Palestinians -- and to salvage democracy and morality within the Jewish State itself -- the 35-year occupation must end. Two weeks ago, to further that goal, American Jewish critics of Israel founded the national Covenant of Justice and Peace, building on the work of older groups around the country. On the other side, a recent call by Palestinian human rights lawyer Jonathan Kuttab and Nonviolence International director Mubarak Awad to transform the Palestinian armed struggle into militant nonviolent resistance is attracting growing attention.

So let's remember that justice and liberation, democracy and safety, can only come about if they come to all of us, together. Let's not deplore only one side's racism; or propose remedies that discount one side's valid needs; or accept the argument that one side has the right to kill uninvolved civilians. Recognition that Israel's occupation oppresses Palestinians is central. But the justice-based left must seek analyses and solutions built on general principles, and reject those that make new forms of oppression inevitable.

Dennis Fox is on leave from the University of Illinois at Springfield, where he's associate professor of legal studies and psychology. Fox co-founded he Radical Psychology Network.