Bush stars in a record-breaking fundraiser, as party leaders rake in the cash -- even hawking commemorative Sept. 11 photos. 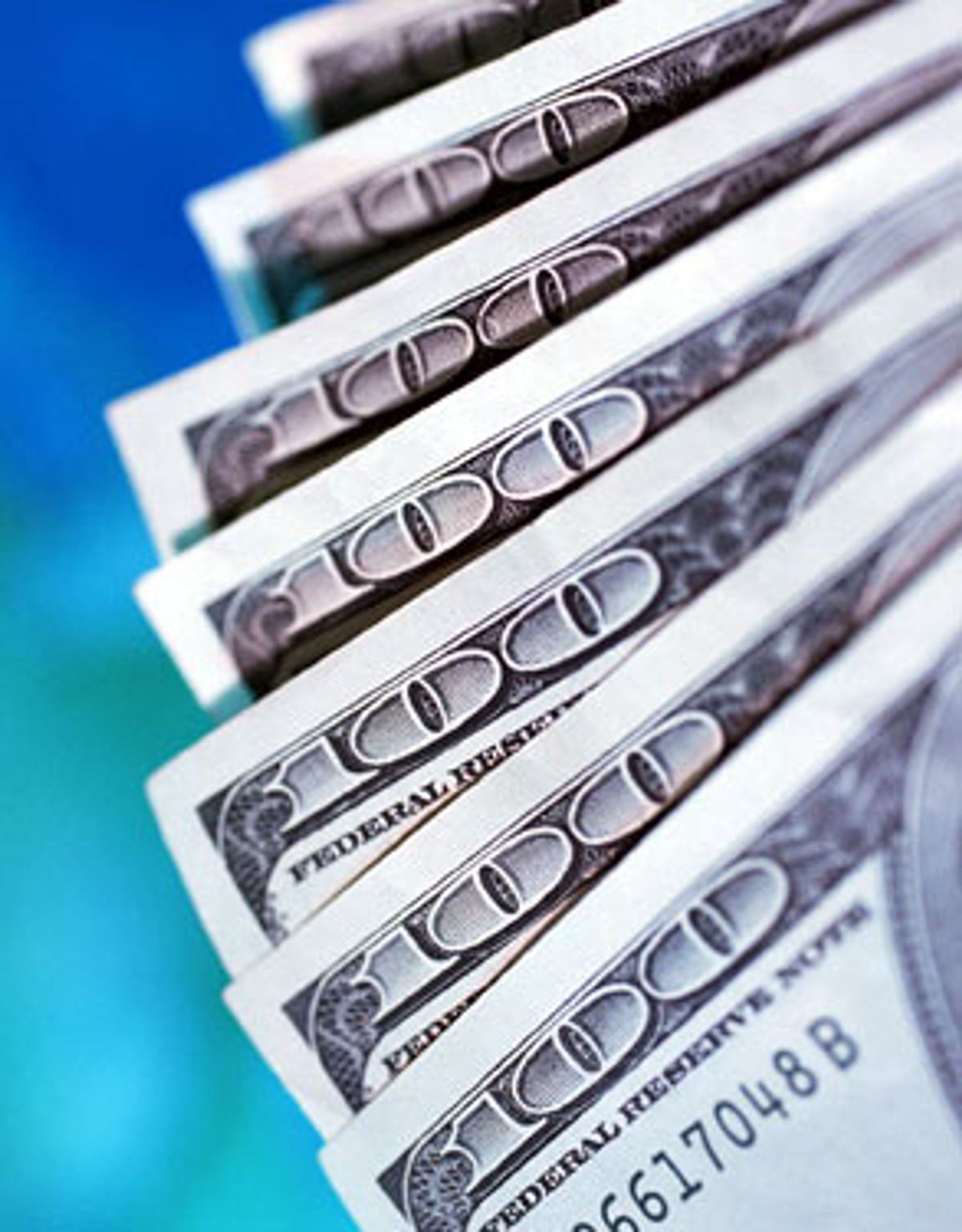 This is what a $33 million fundraiser looks like. Two cavernous rooms at the Washington Convention Center padded with plush new gray carpeting. Ornately decorated tables adorned with bottles of good California wines. An open bar in the front room, where men in tuxedoes stand around, occasionally pressing a finger to the wire in their ears. And the headliner, of course: the president of the United States.

The cheap seats for the Republican National Committee 2002 Fundraising Gala started at $1,500, which helps explain Tuesday night's record-breaking haul. RNC finance chairman Lew Eisenberg boasted to the crowd, "You have broken every record. This is the most successful fundraising event ever."

The Gala raked in more than $33 million, according to RNC spokeswoman Mindy Tucker. That eclipsed last year's total of $24 million that Bush and Dick Cheney brought in, and broke the previous single-largest fundraising record of $26.5 million, set by Bill Clinton and Al Gore in May 2000.

It might also be one of the last of its kind if the McCain-Feingold campaign finance bill, signed into law by Bush in March, goes into effect as planned on Nov. 6, the day after this year's elections. The bill would ban the sea of "soft money" -- political donations that go to political parties and are not subject to federal campaign limits -- that poured into RNC coffers Tuesday night. That might explain why the hosts are also the main plaintiffs in challenging the campaign finance regulations in court.

"I don't think what they did was wrong, but it doesn't have anything to do with the gala," said RNC spokesman Jim Dyke of the photo sales. But that didn't stop Democrats from piling on. Terry McAuliffe, the Democratic National Committee chairman, said the offer constituted a "potentially illegal misuse of a White House photograph [and] is incredibly disrespectful to the families of the thousands of Americans who lost their lives just hours before this photo was taken. I call upon the White House to cease and desist from any further political use of this photograph."

Even Al Gore -- the subject of his own fundraising scandal in 1996 -- chimed in with a statement that read: "While most pictures are worth a thousand words, a photo that seeks to capitalize on one of the most tragic moments in our nation's history is worth only one -- disgraceful. I cannot imagine that the families of those who lost their lives on September 11th condone this, and neither should the President of the United States."

For $33 million, the evening went awfully quickly. There was the brief introduction from Eisenberg, followed by RNC chairman Marc Racicot, who jumped right into a glowing, two-minute introduction of President Bush. It looked as if everyone would be home in time to catch the end of the Celtics-Pistons game. Racicot announced the president, the crowd rose to its feet and out came ... Rep. J.C. Watts, R-Okla.

Watts then led the room in prayer, and walked off reminding the crowd "it is in the wonderful name of Jesus that I pray" -- and sat down next to Eisenberg.

Once again, Racicot stepped up to try to introduce the president, but this time, the only thing to come up from the stage was a loud, cheesy piano score. Racicot implored the crowd to eat as they waited for the president who, he explained, was busy with "a matter that merited his attention." Just then, a bewildered-looking middle-aged woman, holding a glass of white wine, stumbled into the press quarantine area. "Where's Table No. 169?" she asked of nobody in particular. The small handful of journalists shrugged. Complete exasperation came across the woman's face as she noticed the number of the table next to her -- 461 -- and entered the sea of tuxedoes and evening dresses searching for her place.

Moments later, a loud booming voice not belonging to Racicot introduced the president, and this time, Bush himself appeared on the dais, looking less than thrilled to be wearing a tuxedo, shaking hands with the big-time donors and GOP political leaders seated on the platform. But Racicot was not to be denied. He seized the microphone and repeated his effusive praise of the president from before nearly verbatim, offering a little embellishment the second time around.

He praised Bush for his "clarity" and "tenderness," adding, "we love you as a friend and as an unparalleled leader in the history of this nation."

Bush gave a 20-minute speech touching on his achievements as president, saying his administration is "focused on what's best for America." He began with the tax cuts, a surefire crowd-pleaser among this group of about 2,500, most of whom, judging from the evening's price tag, are surely members of the wealthiest 1 percent of Americans who benefited the most from the $1.3 trillion tax cut.

He ticked off items on his wish list, from welfare reform to judicial appointments to the energy bill, but focused the last half of his speech on national defense. Once again, he vowed to "run [terrorists] down one by one and bring 'em to justice," but added this rejoinder: "I talk about our military, and getting 'em, and caves, but I long for peace."

With that, Bush raised a glass of wine to his fellow Republicans. He did not, of course, drink the wine. He simply set it back down, and soon left the building.