"The Lady and the Duke"

The pictures are more alive than the story -- or the actors -- in Eric Rohmer's arty snoozer. 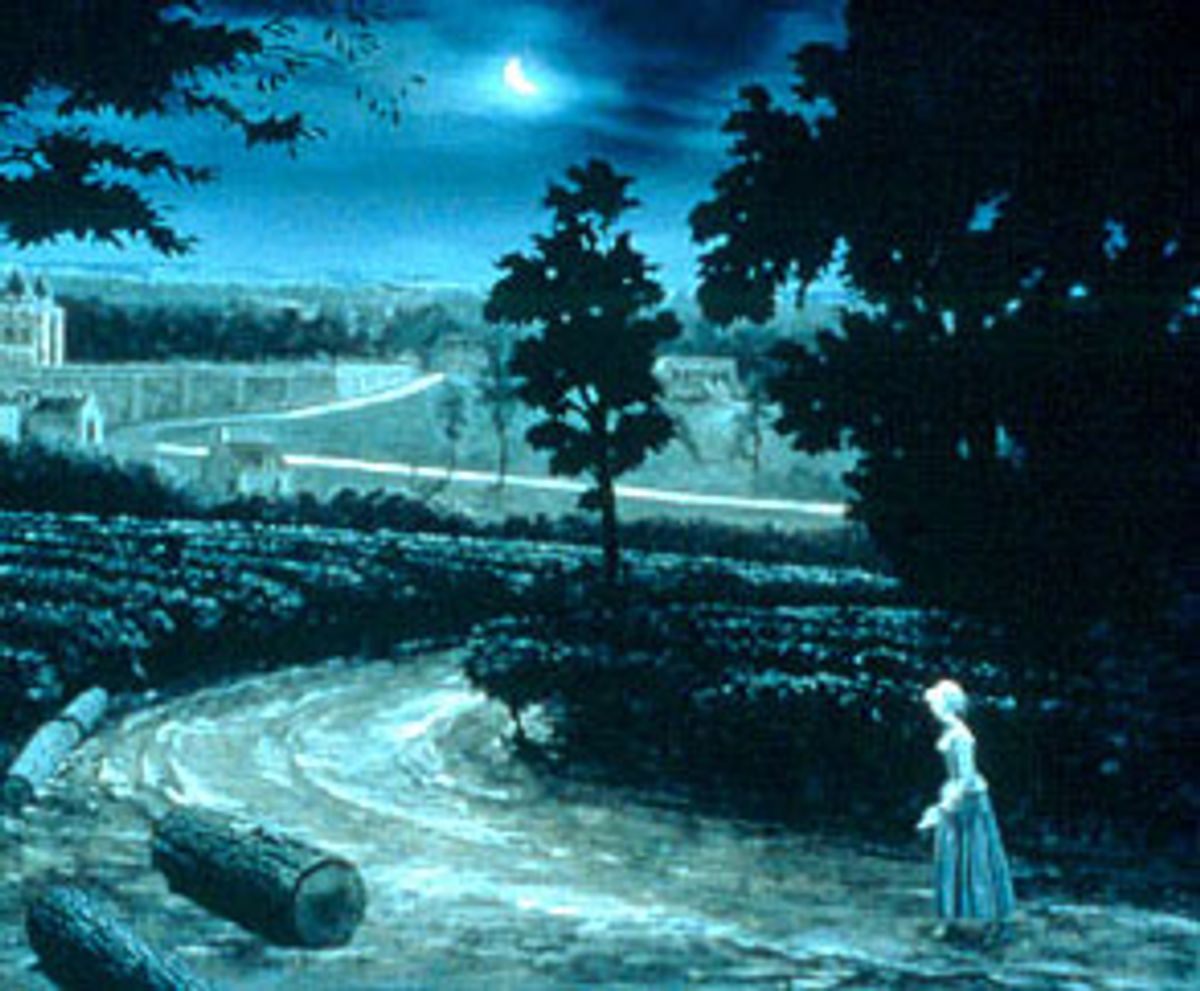 When the painted backdrops in a movie are more alive than its characters, you know you're in trouble. Eric Rohmer's "The Lady and the Duke" is based on the diaries of Grace Elliott, an Englishwoman who lived in Paris during the French Revolution and who had been the mistress first of the Prince of Wales (who became King George IV) and later the Duke of Orléans, the cousin of the ill-fated Louis XVI. Rohmer spreads the authenticity delicately, layer by layer, but the movie still ends up feeling stiff and stale. It's a stately history lesson that moves along at an escargot's creep, and a treatise on the nature of love and honor that's so static it makes the fruity wallpaper of Grace's tastefully furnished home look exciting by comparison.

"The Lady and the Duke" is a painterly movie, and that's both good and bad. Instead of trying to re-create late 18th-century Paris (and its outskirts) with elaborate sets, Rohmer uses rich painted backdrops that consciously mimic classic styles of French painting. They're so evocatively rendered that they'll look familiar even if you think you wouldn't know a Claude Lorraine landscape if it bonked you on the head; they're sure to conjure long-buried memories from art history classes you thought you slept through. In fact, the most delightful thing about "The Lady and the Duke" is the way Rohmer revels in the artificiality of those backdrops. He daubs bits of movement onto them -- birds winging across a bright blue sky, or the waves on a river shimmering with sunlight. The effect, in concert with the actors moving in the foreground, is something like viewing an animated 3-D scene through a stereopticon, although it was achieved using sophisticated digital technology. It's enchanting.

What a drag that the story is such a dud. Lucy Russell plays Grace Elliott, an English aristocrat who has decamped to France and adopted it as her homeland. She remains close friends with her former beau, the Duke of Orléans (Jean-Claude Dreyfus), and the two maintain an easy familiarity. When he comes to call on her, she invites him into her private chambers to chat while she finishes dressing; propriety isn't an issue with either of them.

As the atrocities of the Revolution escalate around her, Grace is forced to plumb new depths of courage and resourcefulness. She briefly harbors a fugitive in her house, risking her own life. Later, as heads roll, she continues to maintain her aura of aristocratic virtue. (You see, the rich are better than you and me.) The duke, meanwhile, wobbles and loses his footing in this frightening new world. Charming and cultured, but also clearly open to sensuality and pleasure, he recognizes that the world must change: He just isn't sure of the best way to bring those changes about. Much to Grace's horror, he ends up voting to sign the death warrant for his own cousin, a move that doesn't, in the end, save even his own skin.

Their relationship -- the easy kind of friendship that former love affairs sometimes, if we're lucky, segue into -- is the movie's chief underpinning, and it's a potentially interesting one. But "The Lady and the Duke" is laden with so much expository dialogue ("What times we are living in! Those enlightenment philosophers should open their eyes") that it's a bit like being trapped inside a badly written history book.

And if the character of Grace is supposed to be a model of ever-increasing resilience and fortitude, why is she always bursting into tears whenever something bad happens? At some point, you'd think she'd catch on that a revolution is no picnic. Instead, we see lots and lots of dignified, womanly crying, followed by Grace's dabbing at her tears with a hankie and straightening her torso inside her brocaded bodices. That's the movie's idea of character development. Russell might have rescued the role by bringing some grit and liveliness to it, but she doesn't seem to have it in her; she's best when she's bantering with Dreyfus, who has a jowly sexiness about him, but even then, she never lets us forget how noble and admirable her character is supposed to be.

"The Lady and the Duke" isn't boring in the same way Rohmer's most recent pictures, set in the modern day, like 1998's "Autumn Tale," have been. There are no insufferable people socializing irritably around their outdoor dining tables. Nor are there many (or any, for that matter) nubile young babes whose pouty lips are intended to substitute for a story line. But it's dull in a very tasteful way, with none of the reverberating tenderness and sometimes surly vigor that characterize Rohmer's best work, things like "Summer" and "The Aviator's Wife."

But oh, those backdrops! Rohmer seems to have poured more feeling into them than he did into his characters, whether he meant to or not. Softly colored but vivid, they transport us not necessarily to another time, but to a place outside time where things of exquisite beauty -- paintings, music, buildings, landscapes -- can move us to a state of breathlessness. Rohmer stops time, in the good way, with those backdrops. Too bad that the rest of the time, he drags the minutes around like a dead weight.