In space, no one can hear you groan

The soul-deadening string of clich 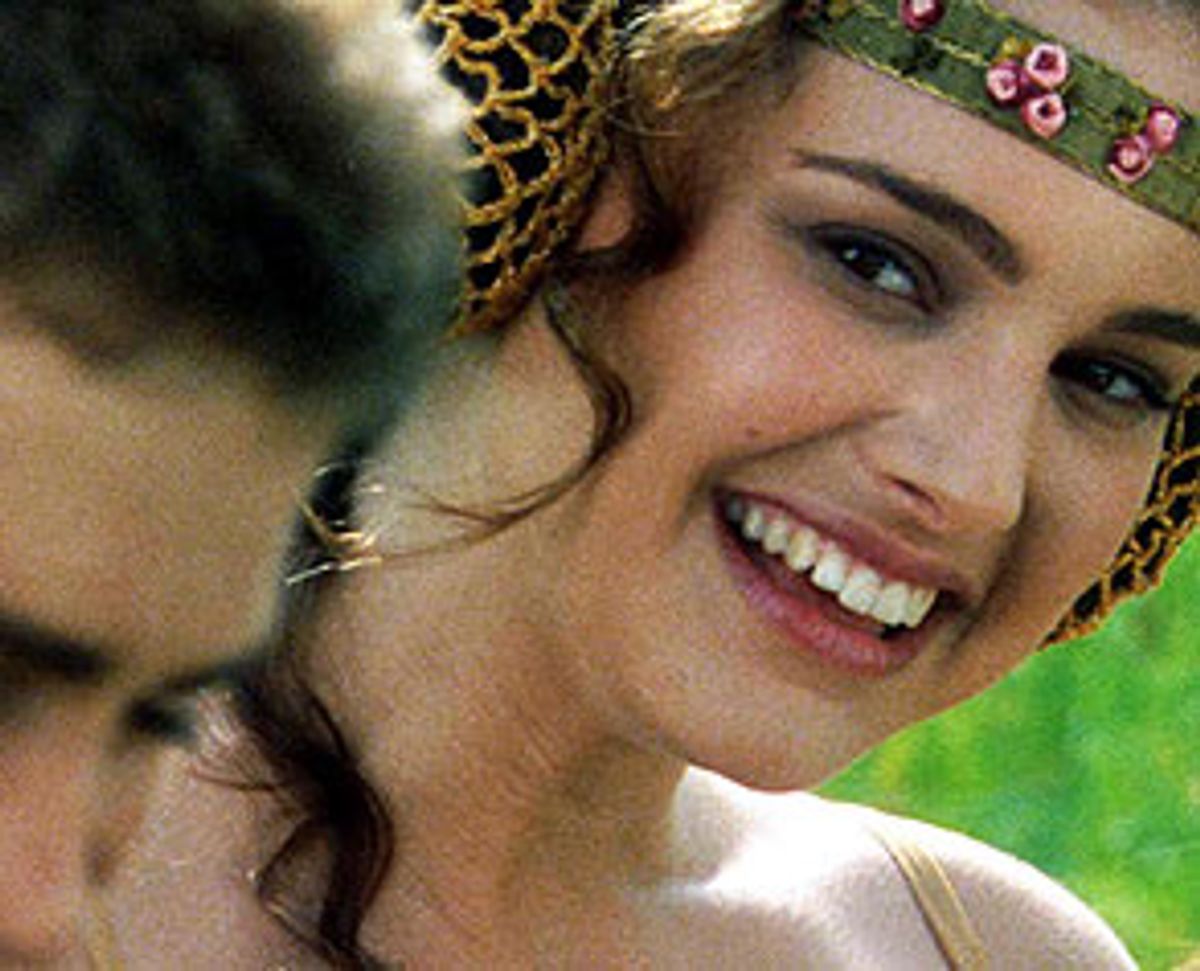 "Star Wars: Episode II -- Attack of the Clones" could be the worst movie ever made and still it would have the faithful rallying around the Lucas franchise, brandishing their light sabers like bayonets. Against that army of formidable opponents, it seems like a waste of breath to point out the flaws in a movie that isn't really a movie at all: truncated sequences that don't string together into a coherent story, dialogue that may as well have been cobbled together out of pieces of wood instead of words, love scenes shot to look like douche commercials. At this point, George Lucas can put whatever he wants on-screen and get away with it. He has become the ruler of the universe, at least the one between his ears; his wish is our command.

Anyone who dares criticize Lucas has to be prepared for an onslaught of e-mail from fans. But the irony here is that for all the fan-boy loyalty he inspires, Lucas doesn't make movies with the hopes or desires of an audience -- any audience -- in mind. In his fortress, the lights are on, but nobody's home.

Forget for a minute that we're the ones paying the electricity bill. "Attack of the Clones" is barely reviewable as a movie because it's something so far beyond (and yet less than) anything an honest-to-God movie should be. It's an event, a juggernaut, with a preprogrammed audience ready to like it whether it's any good or not.

Of course, you could have said the same about "Star Wars: Episode I -- The Phantom Menace," and you'd be right. But as aggressively piddling and impossible-to-follow as that film was, "Attack of the Clones" is actually worse. Instead of unraveling the back story behind the first "Star Wars" (now, of course, designated as Episode IV) in any recognizable narrative fashion, Lucas has decided to tell it with almost exclusively expository dialogue and a handful of not particularly impressive effects thrown in.

In fact, Lucas seems to have gone out of his way to make the plot complicated, as if following the wormy convolutions of the tale were supposed to be some kind of test -- forget actually caring for the characters or being enthralled by the magic of a story as it unfolds. The message seems to be, if you find yourself unable to diagram the plot and all its alleged intricacies in 60 seconds or less, you can't belong to the club.

Which may be why so many people, consciously or otherwise, are desperate to belong. In the case of "Attack of the Clones," what does your Captain George Decoder Ring get you? You get the crawl at the beginning to explain where we're at in the story, which you'll need whether you remember a shred of the plot of "The Phantom Menace" or not.

Ten years have passed: Padmé Amidala (Natalie Portman) is no longer the queen of the planet Naboo, but an important senator who represents her home planet in the Galactic Republic. Even though we don't really see her do anything except flit about in the worst movie gowns since "Mahogany," she apparently is important enough for someone to want to assassinate her.

An attempt on Padmé's life fails, and Jedi Obi-Wan Kenobi (Ewan McGregor, again doing a fine Alec Guinness impersonation but otherwise seeming lost and alone in the galaxy as the one actor attempting to give a real performance in this mess) and his young protégé Anakin Skywalker (Hayden Christensen) are assigned to investigate.

The trail leads them to Count Dooku (Christopher Lee), and you know he's bad because his name sounds kind of like kidspeak for "turd." Dooku is a separatist who wants to secede from the Republic and otherwise stir up all sorts of trouble. Luckily, though, on a distant planet everybody has forgotten about, there's an army of mighty soldier clones who are almost ready to receive their orders to defend the Republic. They've been grown from the earwax scrapings of a fearless bounty hunter named Jango Fett, who's the last of the Mandalorians and also the forefather of a great Gypsy guitarist.

In other words, this is a story you'll definitely want to take seriously. It really heats up when young Anakin and Amadala, who knew each other as kids but haven't laid eyes on each other since the puberty fairy waved his magic rod, fall desperately in love. But of course, a Jedi knight isn't allowed to have relationships with the fair sex, and a senator has no time for nookie, anyway.

Thus we're subjected to an embarrassingly dewy scene, set on a soft-focus hillside straight out of "The Sound of Music," in which the two roll around playfully together on the grass, each hoping to inadvertently cop a feel. Later, they stare into each other's eyes on a moonlit terrace, talking in hushed tones about the infeasibility of inserting Tab A into Slot B. Forget "Spaceballs" -- we're talking "Blue Balls."

Poor George Lucas: For him, the whole galaxy is a town without pity. He approaches the love scenes between Anakin and Amidala with unsheathed embarrassment. Clearly, he can't wait for them to be over so he can get on to the cool stuff, much of which he's stolen from other movies anyway. (A city of roadways floating parallel to one another on many different levels is lifted straight out of "The Fifth Element"; there's a major battle, complete with bloodthirsty beasts, derived straight from "Gladiator.")

There's one special-effects scene in "Attack of the Clones" that qualifies as fun: A light-saber duel between Dooku and that little whippersnapper Yoda, who's about one-sixth his size. When Yoda swings and sweeps through the air, jabbing and slicing at the stringbean-elegant Dooku (even when he's playing a dud of a character, Lee can't help but look elegant), the movie gets a momentary jolt of energy. The sequence works because it shows us a Yoda we haven't seen before, moving in a way we never imagined he could -- it's a bit like seeing Kermit the Frog ride a bicycle. In that one sequence, Lucas creates a believable reality for a beloved and well-known character that teases and tickles our imagination.

The rest of the time, though, "Attack of the Clones" leaves us constantly hoping that with the next scene, something exciting will actually happen. The story is chopped up into dozens of tiny, episodic bits; they're supposed to move the action along rapidly, but they only serve to make the movie feel like an elongated cheapie toy train with too many cars for its weak engine to pull.

What's more, Lucas has never met a stereotype he didn't like. Jar Jar Binks, his dreads dangling and his patois pattering, makes a few brief appearances. (For what it's worth, the preview audience I saw the movie with hissed when he came on-screen and cheered when he left.) We also get another chance to see the crooked moneylender we first met in "The Phantom Menace," the guy with the insect wings and the big, hooked nose. This time, he has apparently sold Anakin's mother down the river. But we know he's not supposed to look Jewish or anything because, as everybody knows, Jews don't have wings.

Scene after scene, "Attack of the Clones" looks, sounds and smells bad. Portman and Christensen (the first of whom is incredibly talented, and the second of whom at least had a fighting chance in "Life as a House") bumble about awkwardly, trampling over their own and one another's clumsy lines. (Portman's outfits are a consistent disappointment: Whose idea was it to put her in that chintzy Courrèges-by-way-of-Target stretch outfit for the climactic escape scene?)

"Attack of the Clones" is the ultimate betrayal of the two high points in the "Star Wars" series: It's such a far cry from the giddy, Saturday-afternoon feel of the first "Star Wars," and from Irvin Kershner's somber, completely enveloping "The Empire Strikes Back," that it hardly deserves to be mentioned in the same breath.

What no one wants to admit is that modern fantasies like TV's "Buffy the Vampire Slayer" and J.K. Rowling's Harry Potter books have rendered the ever-more-convoluted machinations of the "Star Wars" franchise irrelevant. (I'd also argue that the first installment of Peter Jackson's "Lord of the Rings" series stole the thunder of "Attack of the Clones" months in advance.) Both "Buffy" and the Harry Potter books relate directly to real life, instead of taking place in a sterile, self-contained universe. Both have done a much better job than the "Star Wars" series of creating a rich and complex mythology and, most important of all, they've given us characters we genuinely want to care about.

Lucas, on the other hand, has created an imaginary universe that pretends to fuel our imaginations even as it seals them off: He doesn't want our imaginations to soar, because then they will no longer be in his power. That's why every plot detail in "Attack of the Clones" is so neatly planned out and controlled. This is a fantasy with no poetry in it.

Which explains why barely a frame of it stuck with me after I left the theater. For some moviegoers, the two-hours-plus of "Attack of the Clones" may qualify as fun. But what I loved best about it was running, almost literally, from the theater afterward: I can't remember ever feeling so glad that a movie was finally over. Lucas may have held my imagination hostage for two hours, but reclaiming it afterward wasn't hard at all. The Force is always with us. It lives, even when George Lucas tries to bludgeon it to death.