First the White House ignored warnings about al-Qaida. Then it tried to stop Congress from getting the truth. Now we know why. 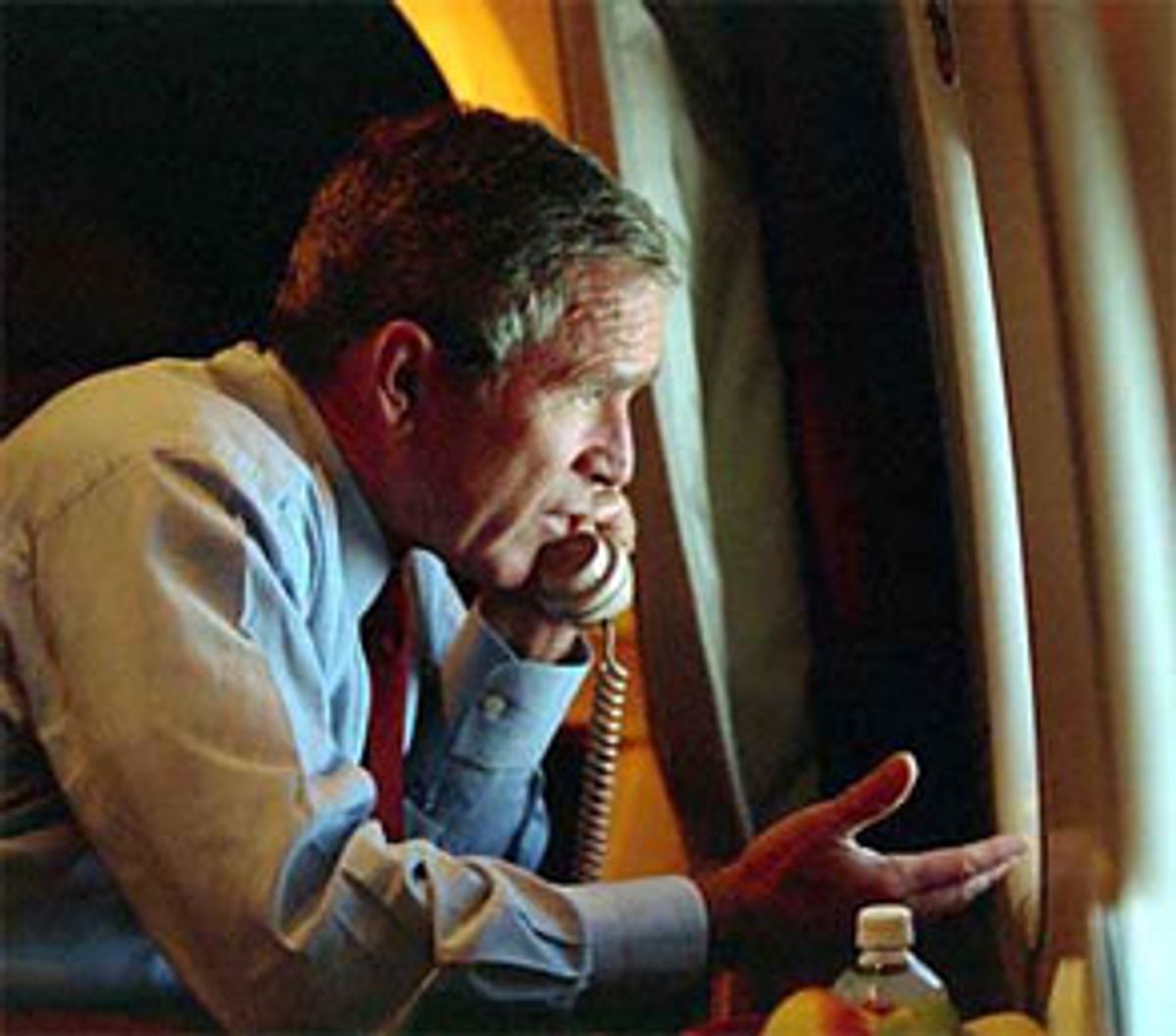 Incompetence, rather than conspiracy, remains the most plausible explanation for the Bush administration's failure to prevent the terrorist atrocities of Sept. 11, 2001. But "conspiracy" is beginning to look like a plausible description of the administration's effort to conceal its tragic errors.

For the first time in eight months, angry citizens are asking why they have suddenly learned what George W. Bush knew all along: That weeks before the event, the CIA had warned the president and other top officials of an active plot by Osama bin Laden's al-Qaida operatives to seize civilian aircraft. That during the same period, FBI special agents in Phoenix and Minnesota had warned their own agency of activity by suspected al-Qaida operatives at U.S. flight schools. That somehow nobody at the FBI, the CIA, the National Security Council or any other government intelligence agency managed to connect those dots until after the disaster.

Evidently Bush and his associates wanted to ensure that nobody else connected the dots, because they point directly to the White House. So determined were they to prevent the emergence of such embarrassing facts that, with the Democrats in control of the Senate, Vice President Dick Cheney tried to intimidate Majority Leader Tom Daschle from undertaking a serious investigation of the Sept. 11 catastrophe. Both Newsweek and the Washington Post reported last January that Cheney called Daschle to warn against the investigation.

According to those reports, Cheney was particularly disturbed by the prospect of public hearings and suggested that such an inquiry would be cast as partisan interference with the "war on terrorism." The president later echoed Cheney's bluster, in milder terms, at a breakfast with congressional leaders.

If the military campaign in Afghanistan ever provided a pretext for such obnoxious and self-serving conduct, it no longer does. In the months since those pleas and threats were issued, the White House and its political surrogates have repeatedly sought to exploit the campaign against terrorism for cheap gain. They can't sell pictures of the commander in chief on Air Force One and then demand immunity from public scrutiny. Besides, the bipartisan consensus has suddenly turned sour, with conservative Republicans as bemused and troubled as Democrats over the latest revelations.

No one should be surprised that the Bush White House tried to hide important facts about what the president knew before Sept. 11. The first impulse of the president's "communications" apparatus was to mislead the media and the public about the reasons behind Bush's flight from Washington on that terrible day.

For weeks, high officials -- including Cheney, National Security Advisor Condoleezza Rice, political chief Karl Rove and press secretary Ari Fleischer -- repeatedly insisted that the Secret Service believed there was a "credible threat," involving "code-word confirmation," that al-Qaida's hijacked jets would hit Air Force One and the White House. They leaked and promoted that false tale to gullible journalists (notably William Safire) until it was disproved by CBS News and the Associated Press.

The credibility of the White House on these matters was poor then and is poorer now. That is why many of the events of last year will be re-examined for further evidence of what the Bush administration knew or should have known.

One such event is the international economic summit in Genoa, Italy, last July. In the weeks preceding the G8 meeting, the Russian federal police warned about an al-Qaida plot to assassinate Bush. The threat was considered sufficiently serious to keep the president away from the luxury cruise ship that housed his fellow heads of state.

Furthermore, U.S. and Italian officials were warned, according to a Los Angeles Times report, that Islamic terrorists might try to hijack an airliner and crash it into the summit location, with the hopes of killing Bush and others. The Italian authorities responded by setting up rocket batteries around the ancient port to thwart an aerial assault. An Italian ministry of defense officer explained to the Guardian that the missile deployment was meant "merely to act as a deterrent against any aerial incursion." And just before the summit opened, the Times of London reported that the CIA station chief in Rome had warned Italian secret services of a possible "suicide attack" by al-Qaida. What did they expect might happen? But a U.S. official told the Los Angeles Times "that American counter-terrorism experts considered the warning 'unsubstantiated.'"

Almost simultaneously, on July 26, 2001, Attorney General John Ashcroft abruptly stopped flying on commercial aircraft, reportedly due to a "threat assessment" by the FBI. The White House now claims that this had nothing to do with al-Qaida and was related to concerns about a possible attempt against the attorney general's life. At the time, however, CBS News reported that "a senior official at the CIA said he was unaware of specific threats against any Cabinet member." Perhaps it is a sign of paranoia to ascribe additional meaning to any of these discrete incidents -- but it is also apparent that numerous warnings and portents were flying around the globe in the months before Sept. 11.

In fact, we have known for some time that those warnings had been in the air not just for months but years. As early as 1995, FBI officials were warned by police authorities in the Philippines that a captured al-Qaida operative had revealed a plot to crash airliners into the Pentagon and urban office buildings in New York, Chicago and San Francisco. When that story was revealed last fall, the newly appointed FBI director, Robert Mueller, was still insisting that his agency had had "no warning sign" of such attacks.

That statement no longer rings true, and the implications for this government are grave. George W. Bush should stop hiding behind his vice president and his press secretary and his national security advisor; he should step forward and answer questions from the press about this crucial matter. The Senate and House intelligence committees should schedule public hearings as soon as practicality will permit. The congressional leadership should bring to the floor legislation proposed by Sens. John McCain, R-Ariz., and Joseph Lieberman, D-Conn., that would establish an independent national commission to investigate Sept. 11. The first witness to be called before that commission ought to be former FBI director Louis Freeh -- the deeply culpable bureaucrat who has mysteriously escaped questioning or examination in Congress and the news media so far.

And maybe the nation's conservatives should forget about blaming Bill Clinton for a while.